A Tale of John Barrymore 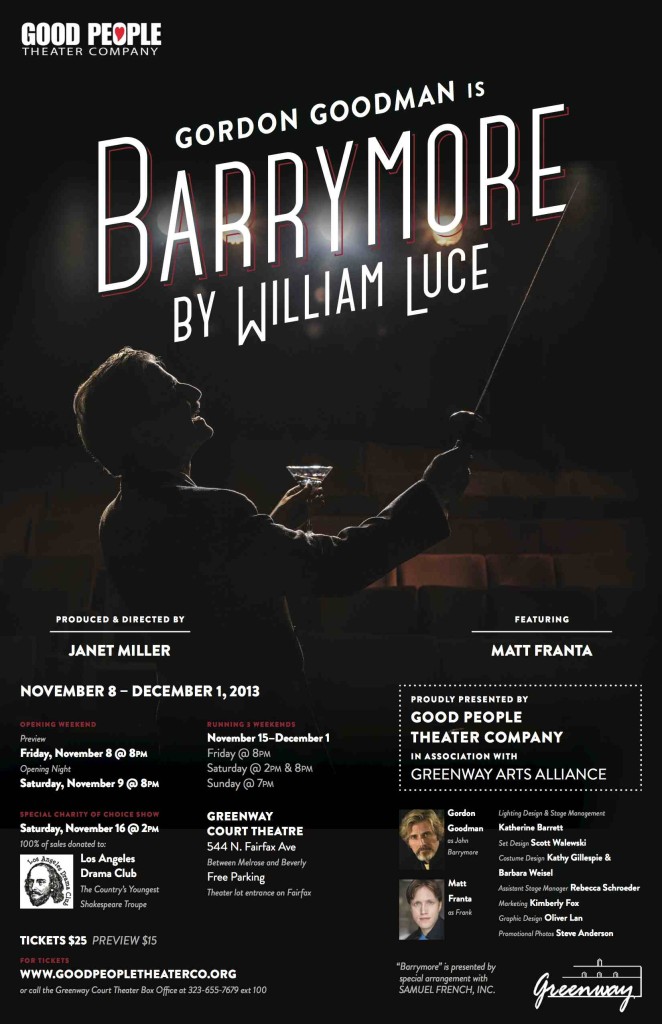 The evening begins with the presence of a man. A man with charisma and charm and conviction as he reaches towards the mobile cocktail tray and makes himself a martini. The man is John Barrymore played by Gordon Goodman (who is a psychologist by day). With a two hour monologue, this one-man show takes you through the many phases of Barrymore’s life. His childhood hurt, his family legacy, his love for the theatre and comedy, his desire for love, addiction to marriage, and uncanny ability to nearly sabotage all of the above in some charming and unforgettable way.

The performance was heart wrenching at times, hysterical, and the truly pristine quality of Gordon’s voice as he sings will transport you. Without any uncomfortable over dramatics, the play was an utter success. The sheer candor of a man who had experienced a spectrum of success, emotion, and public viewing, one can only be left in somewhat happy bewilderment. Gordon deserves a standing ovation for this mesmerizing transportation of becoming John Barrymore.

The show runs through until December 1st.

LOS ANGELES, October 8, 2013 — Today Good People Theater Company announced its upcoming production: William Luce’s BARRYMORE, starring Gordon Goodman in the title role and featuring Matt Franta.  Set in 1942, Luce’s play brings the aging, rye-soaked, but still fiercely charming John Barrymore to life in the empty theater where he and his loyal prompter, Frank, attempt to run lines for a much anticipated reprise of Barrymore’s Richard III—the part that elevated him from matinee idol to serious Shakespearian in 1920, when he was 38 years old.

According to Director Janet Miller, BARRYMORE was chosen to further explore the “theater about theater” theme of Good People’s critically acclaimed inaugural show, A MAN OF NO IMPORTANCE, which played this past June in the Hollywood Fringe Festival and garnered an astonishing 17 positive reviews and booked sold-out performances. Miller is keeping Good People Theater Company’s first season “meta-,” very inside the theatrical experience. “Spending an evening with John Barrymore gossiping about Lionel and Ethel or his suspiciously mannish second wife Blanche is about as inside as you can get, in terms of theater history,” she reports. “But this show is risky. You’ve got to have the right actor—someone who’s Barrymore-handsome and who can believably disappear into the role.  The decision was easy. It was either Gordon Goodman, or pick another show.”

Presented in association with Greenway Arts Alliance, BARRYMORE plays at the Greenway Court Theater, 544 N. Fairfax between Melrose and Beverly. BARRYMORE previews on Friday, November 8 at 8pm, officially opens on Saturday, November 9 at 8pm, and will run for three weekends from November 15 to December 1 (Fridays at 8pm, Saturdays at 2pm and 8pm and Sundays at 7pm.) Tickets are $25 ($15 for the November 8 preview) and are on sale now online at www.GoodPeopleTheaterCo.org or by calling the Box Office at Greenway Court: 323-655-7679 ext. 100. Parking is free in the theater’s lot (entrance on Fairfax).

Despite his 25-year friendship with Miller, signing Gordon Goodman wasn’t a foregone conclusion. “Normally, I don’t have the time set aside to do 99-seat theater,” said Goodman.  “Sometimes people forget I’m also a psychologist, busy helping people with performance issues, and doing academic research in media and entertainment.”

So why take on this role? Goodman confesses a long fascination with John Barrymore, the man and the actor.  “I remember seeing him in the movie Grand Hotel when I was younger and being struck by the charming ease of his performance. As I investigated his story, I learned he was enormously gifted in fine arts, in writing, and in acting. For me, he became a very interesting case study in the complexities of a truly creative—if slightly out of control—life. Barrymore became a character I really wanted to play, to live inside, especially as I’ve gotten older. When Janet called to suggest the project, it was as if she’d been reading my mind.”

Not unlike Barrymore, Goodman started his professional performing career early.  At age 16, he began as a featured baritone soloist with orchestras all over the world, and from there built a 30-year career covering a wide range of artistic mediums, including more than 100 appearances in television, commercials, film, straight plays and—his trademark—musical theater.

For an actor who wants to challenge himself, the richness of Barrymore’s personality is a hook. “Jack Barrymore was a real celebrity, but he was no plaster saint. Alcoholism and his reluctant participation in the Barrymore ‘family business’ led to an erratic track record, on stage and off.”  But Goodman notes Barrymore’s Shakespeare “broke new ground for realism in American acting.  That work was astonishing at the time and, without question, he established himself as one of our greatest stage artists.”

Sadly, as Goodman points out, Barrymore’s antics in later years—the many wives, the raucous lifestyle, his blue sense of humor—flattened his reputation into the cliché of an inebriated has-been. “But William Luce’s play gives the memory of John Barrymore redemption. It’s a beautifully written, loving character study that becomes an ideal vehicle for realism, for presenting the deeper dimensions of a real person’s life on stage. As an actor, I want to create a performance that honors the complexity of Barrymore’s life. Luce challenges us to present an honest account of the man—the charms, doubts and imperfections that make Barrymore, despite his faults, admirable and even loveable.”

A baritone soloist with symphony orchestras since age 16, Dr. Gordon Goodman has been a soloist or recording artist with organizations such as: the London City Symphony, the Prague Symphony, the West Side Symphony, the Pasadena, Phoenix, Utah, and San Diego Symphonies, and the Los Angeles Baroque Orchestra. His voice can also be heard on the soundtracks of: Flatliners, Dracula, The Postman, Star Trek VI, Star Trek Generations, Twister, Independence Day, Six Days-Seven Nights, Devil’s Advocate, Sum of All Fears, A.I, and Triple X. Dr. Goodman has worked under the baton of John Williams, Jerry Goldsmith, Randy Edelman, Bruce Broughtner, and Henry Mancini was once his personal accompanist.

A professional actor, Dr. Goodman has performed dozens of roles for the professional stage across the United States, including the Prince and the Wolf in Into the Woods, Charlie in Annie get Your Gun, Jud in Oklahoma, Dr. Craven in Secret Garden, Lancelot in Camelot, the Duke in Big River, Matt Burke in Anna Christie, the Professor in Gilligan’s Island the Musical, Pierre in The Merry Widow, and Jigger in Carousel, with co-starring roles on television for more than 30 years, beginning with classics like 21 Jump Street and In Living Color.  He has worked on stage or screen with performers such as: Bob Hope, Jack Nicholson, John Raitt, Ed Asner, Johnny Depp, Rich Little, Jim Carrey, Steve Martin, Leslie Uggams, Tim Curry and many others.

Goodman has two Master’s degrees as well as a Ph.D. in Psychology focusing on media and entertainment.

Miller was the Resident Director for Phantom Projects Theatre Group, based at the La Mirada Theatre for the Performing Arts. In 2010, she directed Lydia R. Diamond’s adaptation of the Toni Morrison book, The Bluest Eye to critical acclaim. The following season, Phantom remounted this production at the Miles Playhouse in Santa Monica. Also for Phantom Projects, Miller directed The Miracle Worker, The Crucible, Of Mice and Men, To Kill a Mockingbird, The Complete Works of William Shakespeare (abridged) Grapes of Wrath, The Giver and The Importance of Being Earnest.

Miller’s work has appeared on both coasts in productions of Side By Side By Sondheim, South Pacific, Guys and Dolls, Kiss Me Kate, Jesus Christ Superstar, Anything Goes, Baby, The Fantasticks, Annie Get Your Gun, Dames At Sea, Charlie Brown, Urinetown, The Odd Couple, The Nerd, The Man Who Came To Dinner, The Rimers of Eldritch, and Taming of the Shrew to name a few. She has a special expertise in tap, which she has taught and choreographed worldwide most recently in China and Thailand. She was one of the founding members of Golden State Theatre, the Family Theatre of La Mirada, for eighteen years, directing and choreographing over 50 productions. Miller is the recipient of the 2003 Excellence in Art Award for Drama from the city of Torrance, where she was the Artistic Director/Resident Director at the Torrance Theatre Company for seven years, directing sixteen shows during her tenure. She is also the Artistic Director for the MB Players.

Miller holds a B.A. in musical theatre from CSUN, and an M.A. in theatre from CSULA. She is adjunct faculty at CSUN, CSULA and Cerritos College, and is a proud member of SDC.

Matt Franta is an actor, stunt performer and fight choreographer.  Companies he has worked with include the Guthrie Theater, Marin Shakespeare Company, Phantom Projects, and he has toured throughout the U.S. with the National Theater for Children.  Franta has worked with director Janet Miller on four projects including The Crucible, The Importance of Being Earnest, a staged reading of The Flier, a short play written by Kitty Felde, and most recently in Good People Theater Company’s inaugural production of A Man of No Importance. Franta also currently trains and performs with Swordplay Fencing Studios’ professional stage combat troupe.

The Good People Theater Company believes there are three good reasons to have another small theater company in Los Angeles:

We believe you can never have enough intimate plays and chamber musicals performed to the highest standards by actors and theater techs of many generations. We like seeing good people of all ages do great work.

We believe Janet Miller—the company’s founding artistic director—is a walking theater encyclopedia and a true triple threat as a director of straight plays, a director of musicals and a choreographer.  We believe Janet is one-of-a-kind.  She deserves a professional forum for her talents and ideas, so we’re giving it to her.

We believe quality theater changes people—the actors, theater techs, musicians, and audiences young and old who experience it—for the better. It’s important to be good, to do good (including a charity fundraiser performance in every run) and to make a difference.  So that’s what we’re doing.

Throughout history the circle has been considered a symbol of perfection, harmony, and wholeness …