According to Electrek, a news and commentary site that tracks, analyzes, and breaks news on the transition from fossil-fuel transport to electric transport, the rapid growth of renewables, electric vehicles and other building blocks of a clean energy future, finds that if US wind, solar, and geothermal power continue to grow at the same 15% annual rate, renewables could meet the US’s current electricity demands by 2035. And by the end of this year, there will be over 2 million all-electric vehicles sold in the US alone. While that may not seem massive, considering the hit the automotive industry took over the last two years, its a huge win for American auto manufactures.

One company taking this to heart is GMC. They’re introducing their latest evolution with their all-access, all-electric Hummer EV. Announcing their new all-access, all-electric Hummer EV, GMC is at the forefront of exponential growth in the market of sustainable and environmentally friendly vehicles. And on March 27th, The History Channel’s Drive block brings the story of the new GMC all-electric, all-access Hummer to life in their documentary, “Revolution: GMC Hummer EV”. GMC and A+E Networks announced the television premiere of the new documentary showcasing the development of the all-electric supertruck and the buzz is generating at lightning speed.

First airing in the DRIVE block on The HISTORY Channel on Sunday, March 27, at 11 a.m. ET, the 60-minute film follows the hand-selected group of General Motors team members that helped launch the company’s first all-electric pickup in record time—just over two years. Thanks to the documentary crew’s unfettered access, viewers will go behind-the-scenes of key moments in the development of the GMC Hummer EV, from inception to start of production.

Our goal was to upend what an electric vehicle is capable of and push the boundaries from 100 years of vehicle development experience,” said Josh Tavel, executive chief engineer.

“This documentary captures the soul of a team capable of incredible innovation and resilience. Their learnings are laying the foundation of vehicle development for decades to come.”

GMC selected Detroit-based WTP Pictures and Hiatus to produce the film, and director Sean King O’Grady to bring the team’s journey to life. Join the team in the freezing temperatures of Michigan’s Upper Peninsula as they test the limits of the GMC HUMMER EV on snow and ice. Then, head to the scorching heat and steep red rocks of Moab, Utah, as the team fine-tunes the truck’s off-road capability. Along the way, viewers will dive deeper into GM’s testing and development facilities—previously unseen by the public—including the storied halls of the GM Design building at the Global Technical Center in Warren, Michigan, and the company’s rigorous proving grounds in Milford, Michigan, and Yuma, Arizona.

Viewers will also go inside the massive undertaking to build out and retool GM’s Factory ZERO Detroit-Hamtramck assembly plant. The documentary also showcases the development of GM’s Ultium Platform, a dedicated EV architecture and propulsion system that provides flexible applications in nearly every type of vehicle. Alongside the 2022 GMC Hummer EV, this trifecta reinforces GM’s commitment to an all-electric future.

The story we discovered while filming was far more fascinating than anything we could have hoped for,” said O’Grady. “We witnessed a bold and passionate team bring GM’s first major entry into this extraordinary transformation of the auto industry.

He continues, “This was an incredible opportunity to go deep behind the scenes of the development process to discover what it takes to bring a vehicle to life, and to capture this moment in automotive history as it happened.”

“Throughout the film, we incorporated imagery of the team fine-tuning the GMC Hummer EV and testing across a variety of rugged terrains and cutting-edge industrial settings,” said Jesse Ford, founder of WTP Pictures and producer of the film. “We’re excited to show audiences how hobbies and experiences inspired real world features like CrabWalk1.”

Following the premiere on The HISTORY Channel, there will be an encore showing of the film on FYI on Thursday, March 31, at 9 p.m. ET. The documentary will also be available for streaming via History on Hulu and History.com on Sunday, March 27 as well as on GMC’s YouTube channel starting Sunday, April 3.

“A+E Networks is proud to collaborate with GMC to bring car enthusiasts behind the scenes of the making of the 2022 GMC Hummer EV, GMC’s first all-electric vehicle,” said Mike Buccella, vice president, Enthusiast Ad Sales, A+E Networks. “DRIVE viewers on The History Channel and FYI have an incredible passion for automotive innovation and adventure and this documentary delivers those in spades.”

The 2022 GMC Hummer EV Pickup2 is the first all-electric vehicle in GMC’s portfolio and features revolutionary architecture that delivers off-road capability and on-road performance. Throughout the documentary, see how the team developed industry-leading innovations, including the available CrabWalk1 and the revolutionary Watts to Freedom3 launch control mode.

Production of the 2022 GMC Hummer EV Pickup began in late 2021 at GM’s Factory ZERO Detroit-Hamtramck Assembly Center—a 40 year-old facility revamped with a $2.2 billion investment to support GM’s all-electric future. The first customer deliveries began in December of last year and will continue throughout this year. GMC’s electric lineup will expand with the 2024 GMC Hummer EV SUV5, which will go into production at Factory ZERO in early 2023, and the all-electric Sierra Denali.

Reservations for available models are currently accepted at GMC.com/HummerEV. 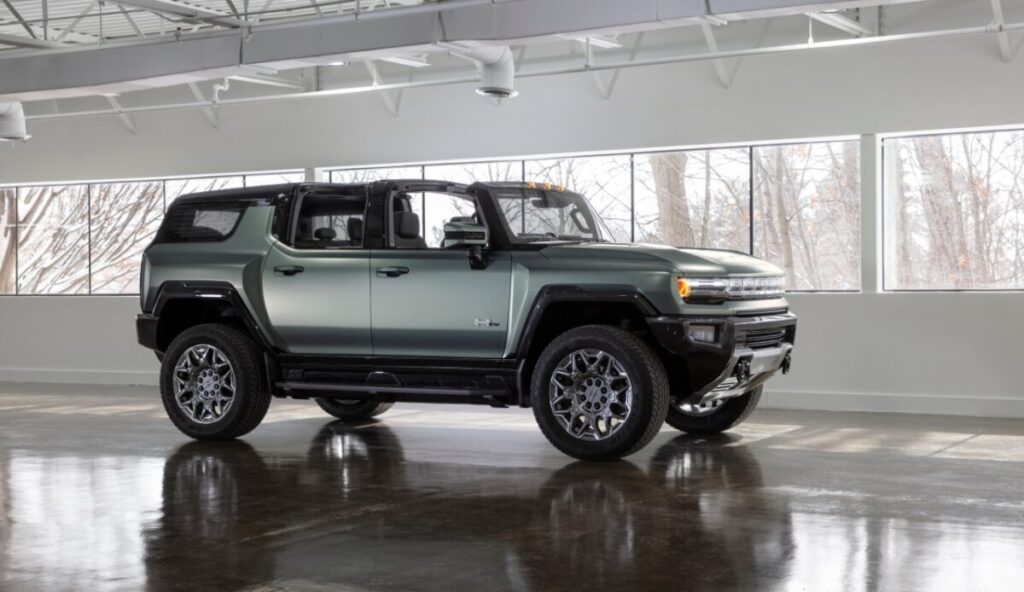 With a strong foundation of manufacturing trucks since 1902 and now selling in a dozen countries across the world, GMC offers purpose-built vehicles designed and engineered to the highest standard. From the all-new compact SUV Terrain to the Sierra HD, our trucks and crossovers deliver GMC’s signature combination of intuitive technologies and premium execution, with the popular Denali sub-brand representing the pinnacle of GMC design, performance and amenities. Details on all GMC models are available at www.gmc.com, on Twitter at @GMC or at Facebook.

[6] Electric Sierra availability to be announced at a later date.