And Equality For All …

And Equality For All … 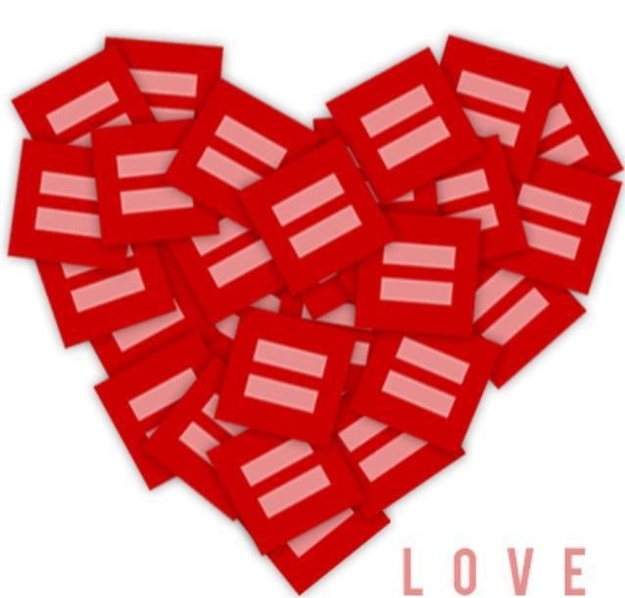 An amended version of our Pledge of Allegiance and a saying I had hoped to hear spread throughout the United States and the world. As a nation that is meant to stand for human rights, equality, and the pursuing of ones dreams, today has restored my faith in this nation. Today in a 5 to 4 Supreme Court decision, gay couples are now allowed to marry. (Saying “allowed” just makes me cringe because it is a right that should not have taken so long to recognize.) Alas, this nation has taken a huge leap towards equality and furthering our progress to support one another without hate or judgment.

As a mother, I look at my daughter having no idea what her sexual preference is and honestly, when I think of the hate and awfulness she would have come up against were she to be a lesbian and want to marry? I am horrified and today relieves me of that fear. She will grow up in a world – in a nation – that does not admonish equality as a mere term but instead recognizes it’s importance and that? Well, that makes me so so proud.

So today, while there will be a huge celebration at the end of PRIDE Month, it is befitting that we take a moment and be grateful that progress is not a word masked by ulterior motives but instead, it is a word that means that our world can come together and that hate and bigotry and violence that seems to, far too often, take center stage, well, this time it doesn’t get to be the center of attention. Today? Love wins. And that is a victory for all of mankind.

Two questions stood before the high court in this case: Does the 14th Amendment require states to license a marriage between two people of the same sex, and does that same amendment require a state to recognize legally valid same-sex marriages performed elsewhere?

Now that the court has found the answer to both questions is “yes,” it clears the way for gay and lesbian couples to marry in all 50 states.

The 5-4 decision comes two short years after the 2013 case of United States v. Windsor, which invalidated a key portion of the federal Defense of Marriage Act (DOMA) and allowed for the U.S. government to begin recognizing legally valid same-sex marriages. That ruling, which repeatedly affirmed the equal dignity of gay and lesbian couples, dramatically accelerated the pace of the gay rights movement and became the basis for federal decisions that brought down same-sex marriage bans in nearly two dozen states.

Today’s case, Obergefell v. Hodges, was argued as a consolidation of challenges to same-sex marriage bans in four separate states: Ohio, Kentucky, Michigan and Tennessee. Each of those bans fell at the trial court level, but went on to prevail at the 6th Circuit Court of Appeals – the only federal appeals court to rule against gay and lesbian couples since Windsor.

Friday’s decision, which culminates decades of activism, comes as no surprise to many — though it is undoubtedly historic. In October, the Supreme Court rejected appeals to hear marriage equality cases out of three different federal circuits, clearing the way for gay and lesbian couples to marry in 11 more states. Additionally, over the last 27 years of service on the high court, Kennedy has authored some of the most important rulings in the history of the gay rights movement — Romer v. Evans, which found that a state could not prohibit gay people from receiving protection against discrimination; Lawrence v. Texas, which found anti-sodomy laws unconstitutional; Windsor, which gutted DOMA; and now, Obergefell, the final chapter of his legacy as the Supreme Court’s greatest gay rights advocate.

Today’s date — June 26 — is also the anniversary of the Windsor and Lawrence decisions.

Speaking at a press conference on the steps of the Supreme Court shortly after the decision was handed down Friday, Jim Obergefell, the named plaintiff in the suit, said he felt his late husband, John Arthur, was with him in that moment.

So You Think You Can Dance … and Dress! A look at the wardrobe making a splash!