A Film by Mathieu Bitton

Purchase the Film in iTunes

Last weekend I was invited to a private screening of Lenny Kravitz‘s film, “Looking Back on Love” Directed by Mathieu Bitton. Before I write the review, I have to tell you that in the midst of watching it, I unzipped my purse in the dark of the theatre, fished around for the small spiral bound notebook I had hiding in there, reached for a pen and took it out. My hand unable to resist writing in the blackened theatre with the dim light of the screen to guide me as the words poured from me, here is what I wrote as my hand scribbled messily, happily, and with total intent:

“Watching the process, the soul pouring out like liquid love spilling from the most honest parts of ourselves. The reality, black and white – the photos, imagery that takes my breath away. Herman Leonard – the truth just awakened through his lens. Sweetly pounded out of us in the most gentle submission. – Lenny – one of the reasons I became unafraid to write. LET LOVE RULE gave me permission to cut my veins and bleed creativity. Figuratively. I would sit as a teenager, awkward and hungry to create at recess and sit on the picnic tables with pen in hand, index cards or lined 3-punched paper and just write. My best friend and I swallowed our youth in music through Lenny and Jim Morrison somehow giving us the freedom to run wild and embrace individuality. Listening to “I Built this Garden”, we were 16, driving in the streets of Culver City, rain thrashing down and felt the sudden urge to do Chinese Fire Drills blissfully unaware of any onlookers.

[The scene in the film with his dog LeRoy playing in the ocean] The waters so clear, so pure and lustrous, beckoning me to purify everything I let pollute me. The ocean. The salt. The waves. The inspiration. The uncertainty. As I watch this film and look at the undeniable lens through which Lenny is shown, he appears both young and old. The right side of his face fraught with story and pain and truth and the left side so full of love and promise and youthful innocence and in the conflicting beauty awakens a smile that embodies both.” – Dawn Garcia, writing without hesitation.

Reading that and having met Mathieu Bitton afterwards, I knew that even still there is something special about the music he creates. 23 years later …

“I’ve been pregnant a long time and it’s time to have this baby.” – Lenny Kravitz

What Lenny Kravitz is referring to is a labor of love: Negrophilia. A project I suspect will be his life’s ambition. Working steadily on the record, feeding the need to write another song, working alongside guitar god, Craig Ross, nothing short of heart oozes from every session; Sometimes exhaustion, sometimes frustration, sometimes uncertainty – but the one constant – it’s gestation continues. This film embodies the story behind a man that has never denied the true Bohemian within. Creating music that has seeped into our souls, thrust us into total sensuality or inherent abandon, instruments translating every truth he knows into the varying note he manages to give life to. It’s a story of a man. A father. A lover. An artist. A dreamer. A poet. A writer. A human being. Family. Friends. Music. But above all how love exists in every single thread that weaves us together. Seated in a chair made of doors worn with time and chipped with tales it no doubt whispers into the sea, buried in the grains of sand propping it up with careful consideration, Lenny Kravitz tells Mathieu, the Director, the candid purpose and path he’s taken. 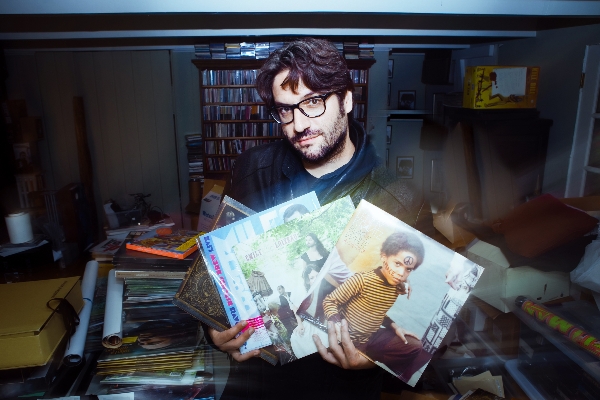 Directed by Artist, Photographer, Producer, and Music Man, Mathieu Bitton, every shot is honest and gritty – no concealed perfections. Told in a fragmented voice that embraces the moments caught through the lens, the poetic narrative strung together by raw moments not only tell a story in a way that I find refreshing, Mathieu – an artist in his own right – propels us into a world both dynamic and real. He shows us the many sides of a man. A musical icon. A dreamer that captivates the gentle hum buzzing within us all – that need to find love in everything.

We watch a musician open up his world to anyone who is willing to step inside. I had the honor of doing a brief interview with Mathieu about the film:

[question]As a filmmaker making your directorial debut, what moment of shooting (especially shooting someone so close to you) made an impact so deeply, you knew the story was coming together? [/question] [answer]I think the impromptu interviews in the Jeep were the most revealing, most honest and unplanned talks and when Lenny started talking about his daughter Zoe, I realized there was another level of importance to this film. Then of course when Herman Leonard visited the island. That was magical for me, being such a huge fan. It gave the film another depth.[/answer] [question]You mentioned to me that the scene with LeRoy standing in the ocean was unplanned. As a viewer it was undeniably poetic. Looking at it now, that particular scene, how do you feel when you watch it?[/question] [answer]Well so much of the film’s scenes were unplanned. I always had a camera on me just in case. But that amazing water shot was the very last one I filmed. I had just finished the “Lenny on the rocks” interview and was about to come off the makeshift platform I was standing on when I saw LeRoy taking his last swim before we hit the road. Watching it reminds me of the peaceful feeling I get on the island.[/answer] [question]The title of the film, “Looking Back on Love”, one can’t but feel that sense of purity and honesty. The careful weaving of what love means to Lenny, his friends, his family, and those invited into his world is very real. How long did it take to create the title or did you know what you would title it before shooting.[/question] [answer]Funny you should ask. I just found my notebook of film notes which was my skeleton for the film. I think as soon as Lenny recorded the song “Looking Back On Love” I knew I had the film title. The first working title on my notebook is “Negrophilia Moods.” I have no memory of writing that but it’s my writing. Second title was “Looking Back On Love.”[/answer] [question]Knowing what a big fan of music and photography you are – and how successful you’ve been in those creative realms – was the transition to a feature documentary challenging or just a natural progression?[/question] [answer]Completely natural. Like everything else I’ve done in my life, I didn’t learn the craft by taking classes or shadowing someone. I just jumped into it. I cannot wait for the next couple films I will be making![/answer] [question]Simply put, what does “Looking Back on Love” mean to you? As a filmmaker and as a friend of Lenny’s…[/question] [answer]It means I was finally able to show the world the Lenny I know. The real Lenny. The human being. The father. The spiritual man. The huge rock star who nearly 25 years after his first album “Let Love Rule,” still carries and preaches the same exact message of spreading love and bettering yourself as a human being. And from people’s responses at screenings and on iTunes and Facebook and Twitter, I see I have succeeded.[/answer]

I want to thank Director and Creative Tour de Force, Mathieu Bitton for inviting me into his world as a viewer, a writer, and a fan of the work he produces. The film is available for Download on iTunes.

To look at the larger scale stills shot by Mathieu Bitton during shooting, please click on the Gallery below. I will be doing a more in-depth interview with Mathieu in the coming month. Keep an eye out, he’s one incredibly creative and talented man.

The Assist Goes to the Flow By…