Notice: Undefined offset: 1 in /var/www/wp-content/plugins/ninja-forms-uploads/vendor/benthedesigner/dropbox/OAuth/Consumer/Curl.php on line 153
 Activism At 13. #BLM | ATOD Magazine: A Taste Of Dawn

Our Generation Must Be The Difference

This is the start of a much needed conversation with adults and my generation, and I want to be among the many to start it.

I want to be able to have a healthy debate—not an argument—and instead create a place where we can talk, where we can see each other’s side, and actually have a productive discussion.

I want to hear people’s ideas on things, their points of view, their opinions, their beliefs and I want to do it in a way that people can openly discuss how they feel without having hate flung towards them. That is the only way we will be able to have true progress. And we need progress. Being free to have these discussions enable us to convince people and make people see that the way the grownups now are doing it, it isn’t working.

If we can actually have the hard conversations, we may hear things we may not want to hear but we will have the opportunity to grow and evolve. In those moments, we are able to create and spread love and positivity and not hatred and fear.

I want people to be able to talk openly about things such as racism, sexism, sexuality, mental health, and other topics similar to these. I want these to be conversations people can have…normally.

But I would also like to say a few things and share my personal beliefs and views on some things that are happening right now.

Did you know there is a scientific reason why people have different skin colors?

In an article published in the US National Library of Medicine, National Institutes of Health, the protective measures of melanin is why skin colors vary. The study states, “Skin color is mainly determined by the mix of carotenoids, oxy-/deoxy-hemoglobin and, most importantly, different types of melanin and also the way that melanin is packaged and distributed in melanosomes (56). The production of melanin takes place in specific ovoid organelles known as melanosomes which are produced in dendritic melanocytes that account for only 1% of epidermal cells.”

The article also adds, “The efficacy of melanin as a sunscreen was assumed to be about 1.5-2.0 sun protective factors (SPF); possibly as high as 4 SFP, implying that melanin absorbs 50% to 75% of UVR. An SPF of 2 means the doubling of protection of the skin against sunburn. Dark skin, which contains more eumelanin than fair skin is better protected against UV-induced damage, and eumelanin is thought to be superior to pheomelanin in its photoprotective properties. As discussed by Gloster and Neal (69) melanin in Black skin is twice as effective compared to White skin (70) in inhibiting UVB radiation from penetrating.”

We’re paying the highest tribute you can pay a man. We trust him to do right. It’s that simple. — Harper Lee, To Kill A Mockingbird

The only reason people have different colors of skin is so there skin doesn’t get damaged by the sun in places where sun exposure is higher and is more harmful.

So you’re telling me that because some people’s bodies had to protect their skin from the sun, they deserve to be murdered in cold blood? Or that they deserve to be treated differently and treated like they are less? That’s like saying if someone was wearing sunscreen, they are a danger to the world. I don’t know about you but that makes absolutely no sense. Black people are people. No matter your race, whether it’s Asian, Black, White, Mexican, or anything else, we are the same species.

Color is NOT a threat. We are humans. We are ALL people. Everybody’s life matters equally, yes, but Black lives are continually threatened in this nation and it has to stop. It’s just so sad to me that people can’t see this.

Another thing I would like to discuss is the people who are responding to the Black Lives Matter movement with All Lives Matter. Of course all lives matter, everyone should be treated equally since we are all the same. That means there shouldn’t be racism. But right now, all lives can’t matter until Black lives matter too. I’m tired of people using “all lives matter” as a rebuttal to Black Lives Matter. The Black community is being murdered and killed just because of the color of their skin. They can’t even go to the store or go on a run without the fear that this could be their last day. So yes all lives do matter, but right now Black lives matter more and that has to be a priority.

We cannot all matter if Black lives don’t also matter.

There is an analogy about a burning house that describes what it’s like when people respond to Black Lives Matter with “all lives matter” in a way that is simple but perfectly represents how why we must stand beside the Black community.

Here is a comic strip I really think breaks it down perfectly: 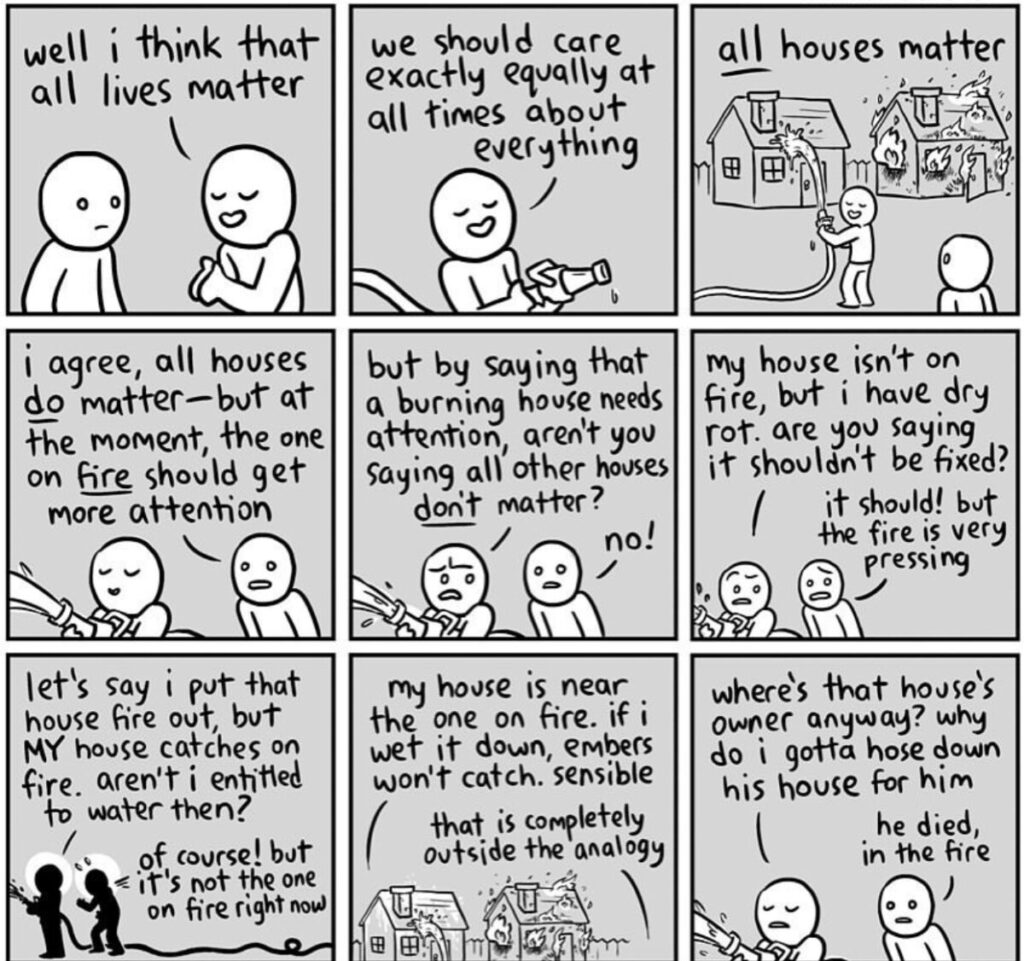 The point of Black Lives Matter isn’t to suggest that black lives should be or are more important than all other lives, but instead that black people’s lives are relatively undervalued in the US (and more likely to be ended by police), and the country needs to recognize that inequity to bring an end to it.

I will continue to write and speak up about things like this. These are just some of my thoughts on the Black Lives Matter movement. But I hope to talk about police brutality and the police in general. I want to talk about the government, oppression, sexuality, different races, sexism and the fear women have to have daily.

I also want to have a conversation about men that have also had terrible things happen to them and are told to “man up” or “be tough.”

I want to talk about mental illness and raise awareness about it.

I want to discuss white privilege and what it really means.

I want to talk about all the things going on in the world.

I want to stand up for what is right, and I will. I also want to freely discuss all of this, especially with people who disagree with my opinions. I want to see other people’s views on these topics and be able to talk about them even if we disagree.

I have hope that my generation can finally bring the change that is needed.

There will be a change and I am going to be a part of it.

NOTE FROM THE EDITOR

This article was written by my daughter, Barcelona. When she shared it with me my heart was happy. As a junior higher, knowing how much passion she and others her age have to change systemic racism, homophobia, xenophobia, sexism, and hate— that is what will drive our humanity forward. Their desire to learn, understand, and then diplomatically incite awareness is exactly what this nation needs. It’s exactly what the world needs.

Activism is bred from righting injustice and the youth of today are more actionable than any generation before. Why? Because as adults, we have failed in our efforts to make life better for future generations and now it’s up to them. Thankfully they are gladly taking the helm and leading the charge. We need the younger generations to carry the unfair burden placed upon them by our parents, grandparents, and sadly even our generation.

We owe them a united world. It’s our moral obligation.

We are proud to have an eclectic range of Guest Contributors + Partners. Whether sharing their knowledge, telling a philanthropic tale, taking a bite out of life, or sharing a personal essay, every one of our contributors and partners add so much to the ATOD Magazine platform.