The Kickoff Luncheon To Wet The Appetite!

As the notice came in that the Austin Food & Wine Festival was kicking off, ATOD Magazine had the distinct privilege of being among those to get a preview at the Kickoff Luncheon for the 2014 line-up at Austin’s Contigo on Tuesday, January 21. With chefs, Tim Love, Mike Lata, Chris Shepherd and Andrew Wiseheart preparing and serving a collaborative, family-style meal and Jeni’s Splendid Ice Cream for dessert, we felt it best fitting to send in our photographer to show you rather than tell you. The images speak for themselves and if this year’s festival is anything like last year’s, you will not want to miss a moment of it. 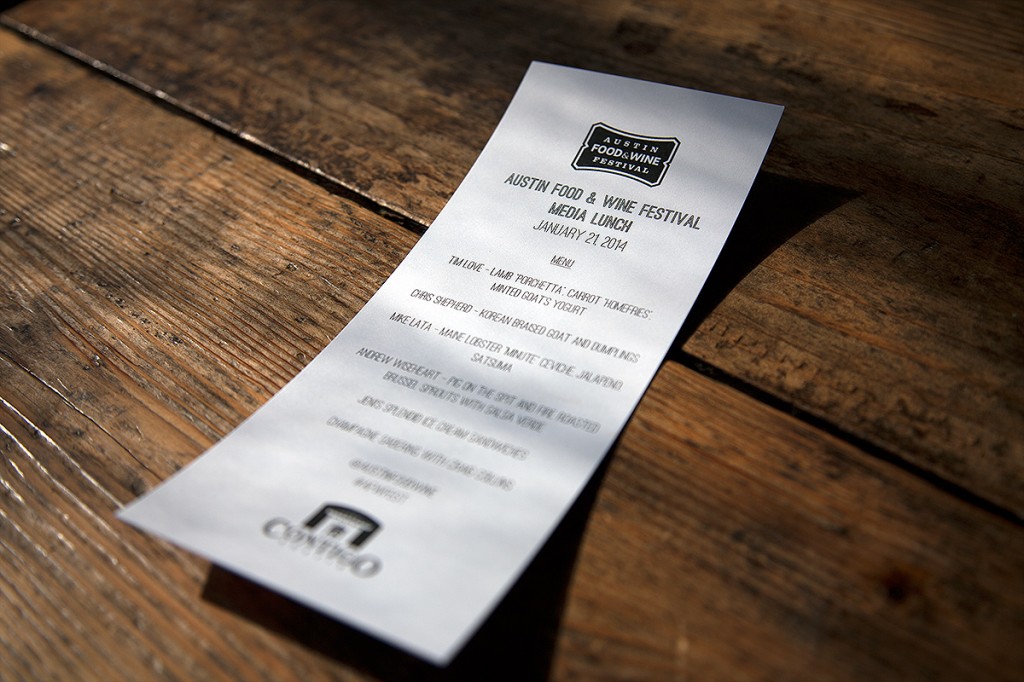 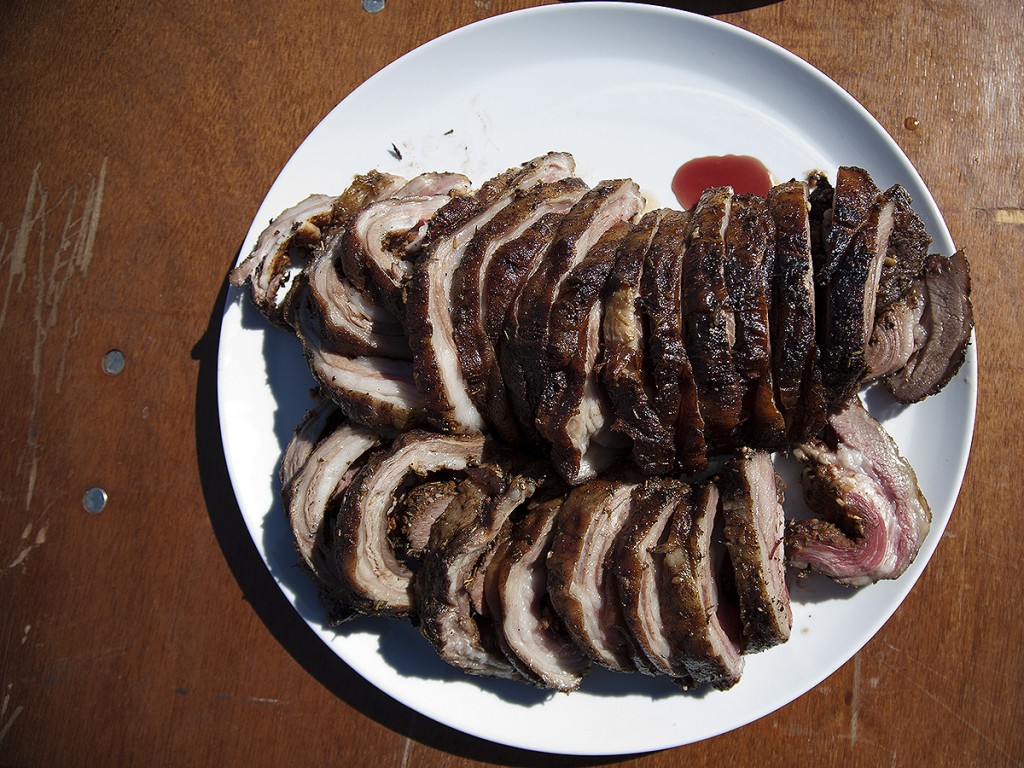 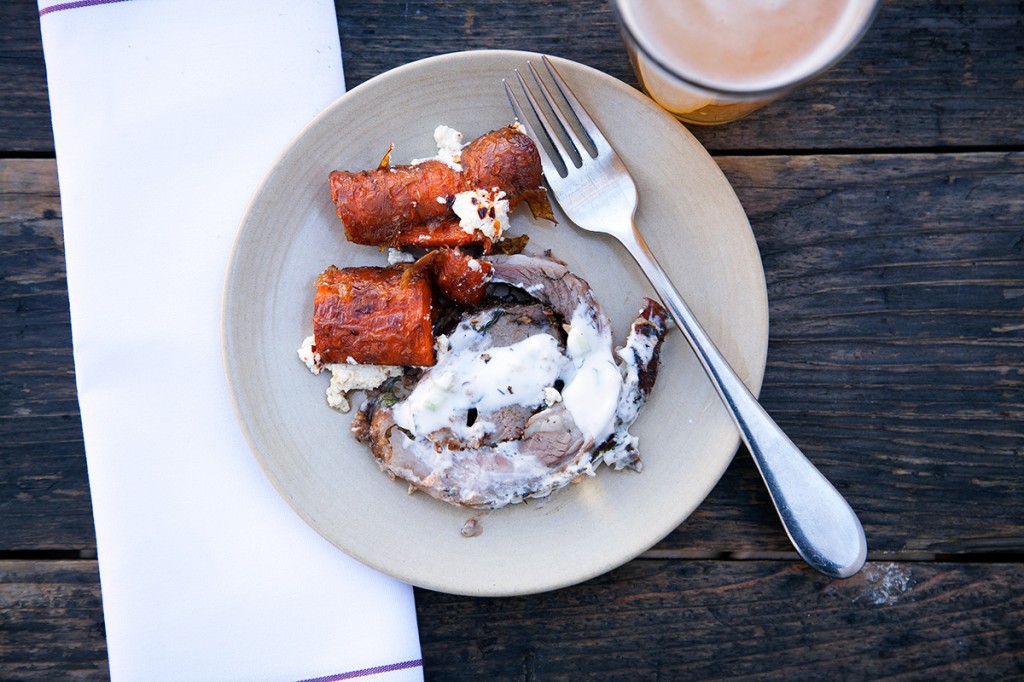 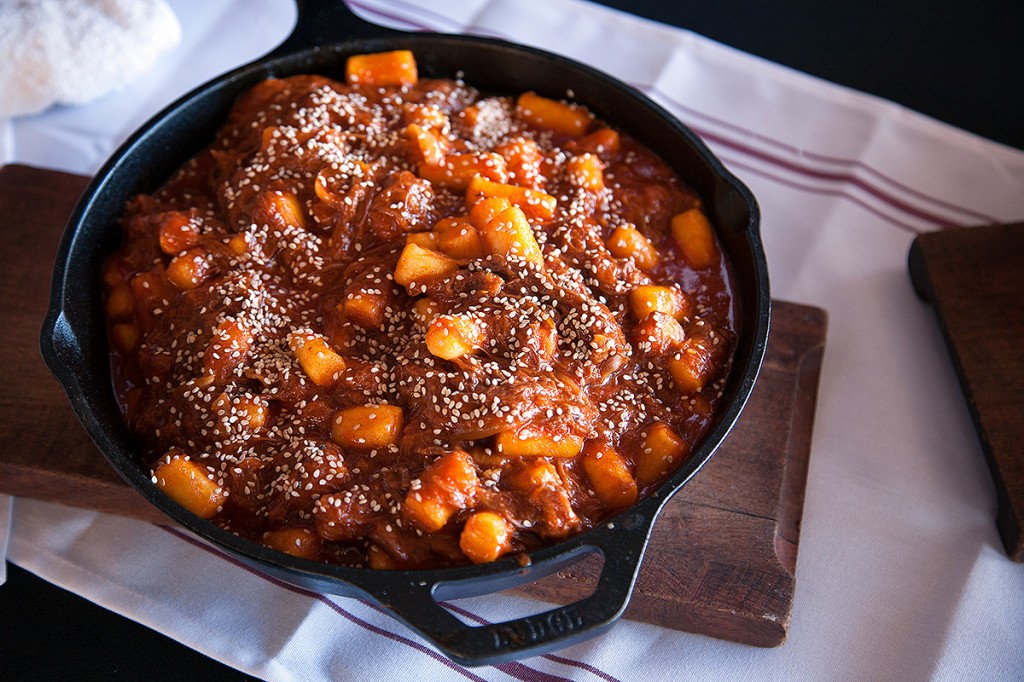 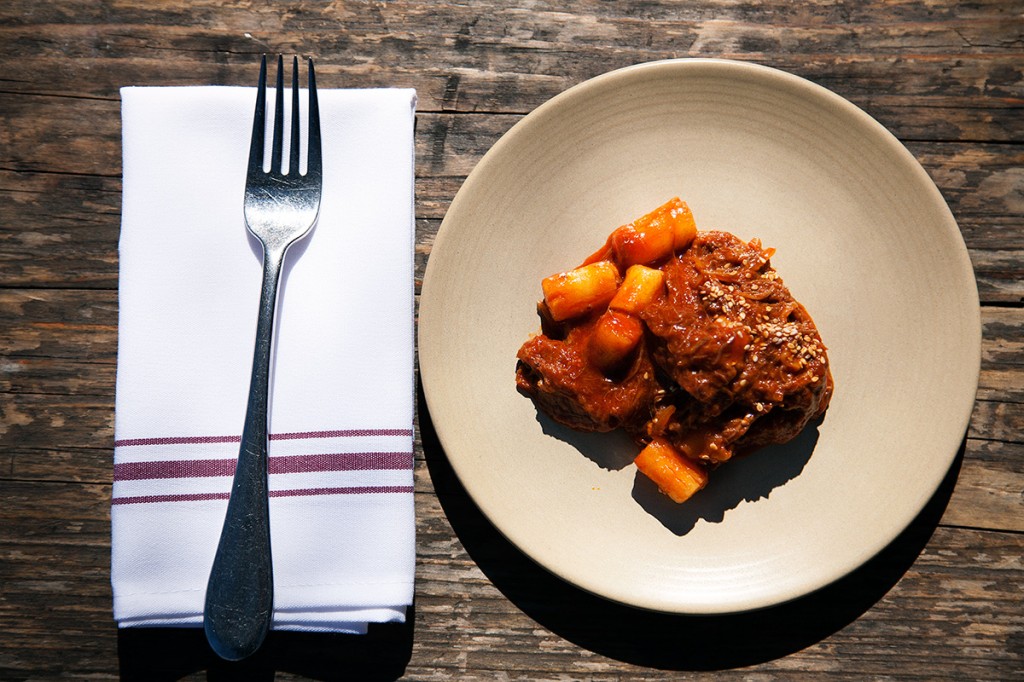 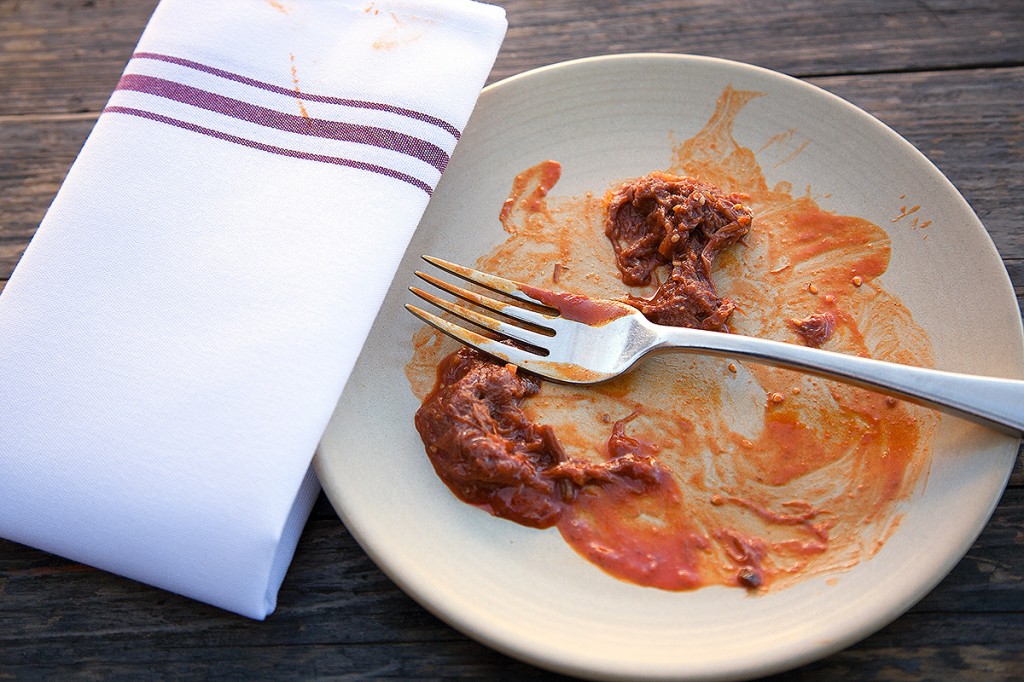 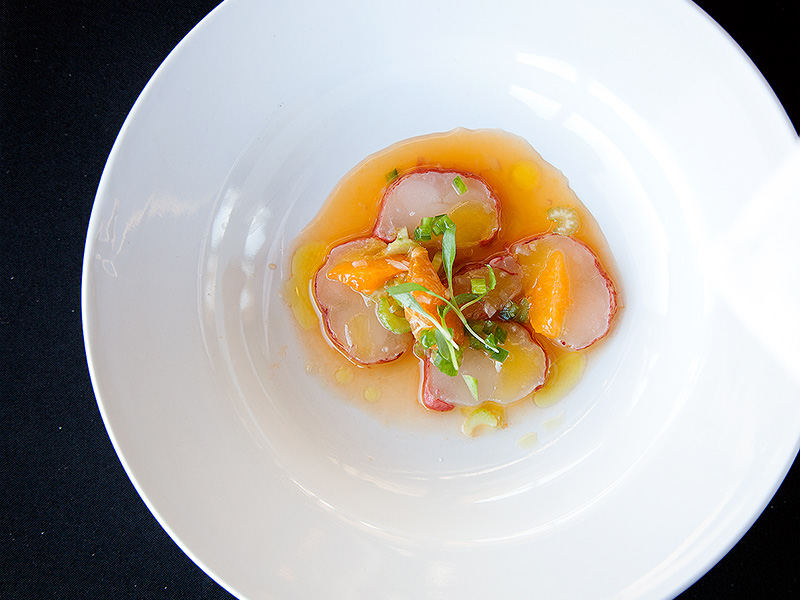 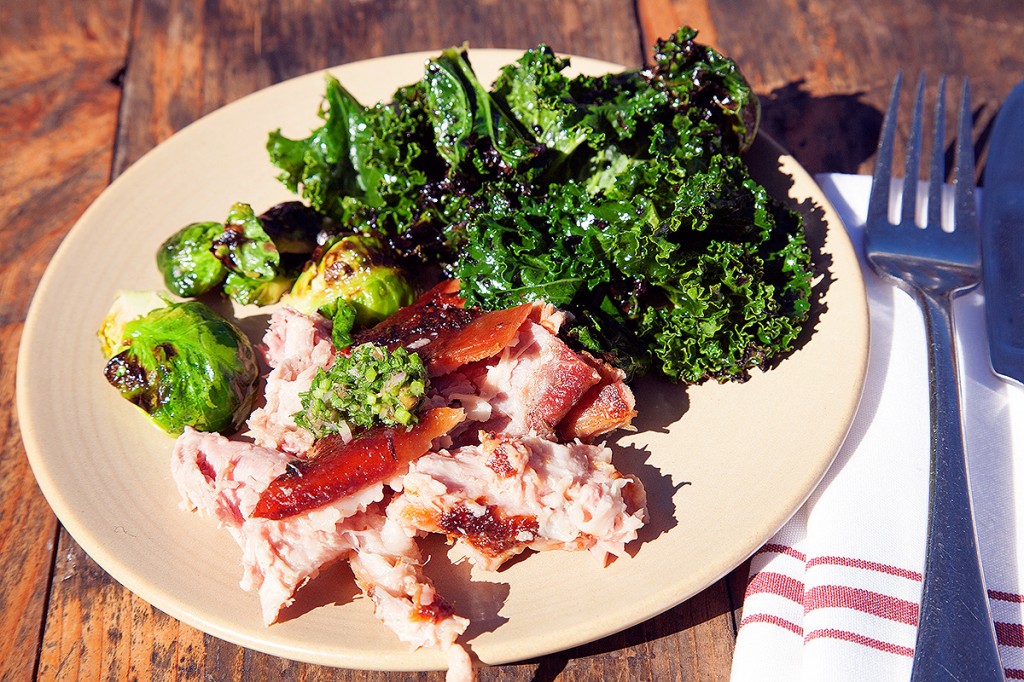 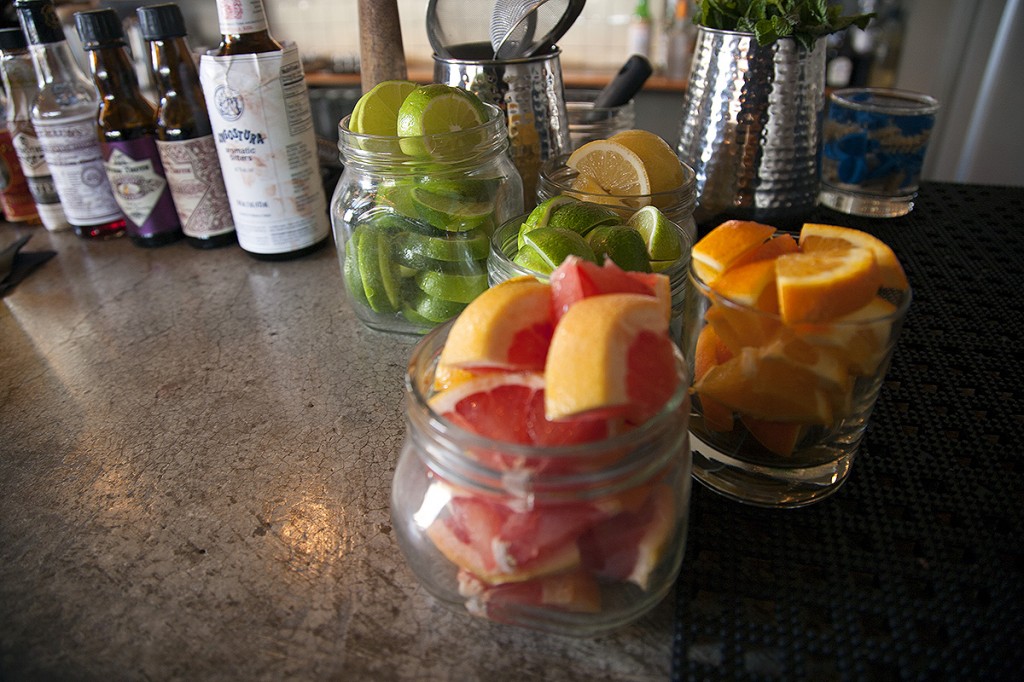 To accompany the bubbles … 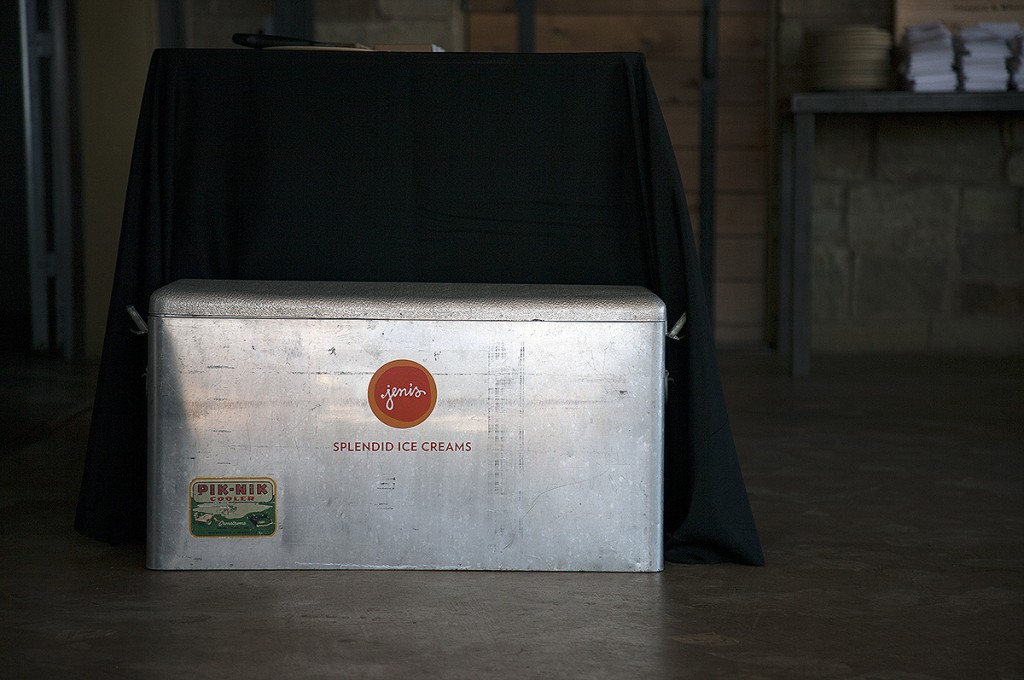 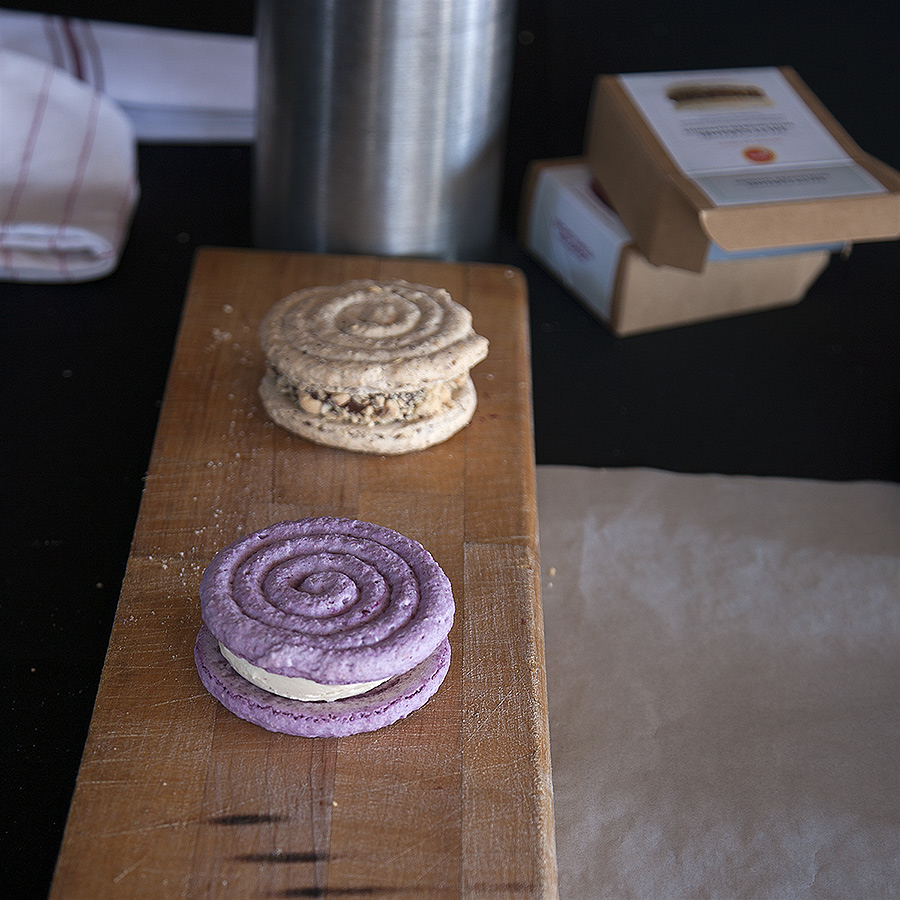 This year is sure to be even tastier than last. Just to give you a glimpse of how “real” Austin Chefs really are, here are two of my favorite answers from Austin Chefs, Tyson Cole and Shawn Cirkiel when I interviewed them for the Magazine:

Q: What is your favorite childhood memory ?

A: Diving boards and swimming pools in  Sarasota, Florida; My Redline BMX bike and tons of Legos.

Q: What is your favorite childhood memory ?

[answer]A: Food wise there are many—picking blueberries in Arkansas; Baking biscuits on a wood burning stove with my blind great grandmother; making our own butter from cows we milked, eating all over NYC; cooking Thai food with some Thai exchange students every year and them sending me spices – and the list goes on and on..The memories of food are about the only thing I remember—not sure what that means.

(ATOD: I’m guessing it means your love of food is as natural to you as taking in air is to most everyone else.)

To read the FULL coverage of the Austin Food & Wine Festival in 2013, click HERE.

A brand-new addition to the weekend is Feast Under the Stars, hosted at Austin’s Butler Park.  Thispre-Festival dinner will be a separately ticketed event, held Thursday, April 24.  Feast Under the Starsis an intimate, outdoor celebration featuringfiveTexaschefs preparing an al fresco dinner.  The collaborative, family-style menu will be prepared by chefsTim Love;Tyson Cole; Kent Rathbun (Abacus); Chris Shepherd (Underbelly); and Jodi Elliott(Bribery). Tickets for Thursday’sFeast Under the Starsare $185 per person, including paired wine and parking, and are purchased separately from the festival pass at www.austinfoodandwinefestival.com/tickets.

The complete list of programming, including panel discussions, cooking demonstrations and more, will be announced on February 25, 2014.  Please visit www.austinfoodandwinefestival.com for more information.

Tickets for the 2014 Austin FOOD & WINE Festival are available in two options:

Taste ($250) and Savor ($850), and are available at www.austinfoodandwinefestival.com/tickets.

The Taste pass includes access to over 40 demos, hands-on experiences, seminars and tastings, and daily Grand Tasting events.   Attendees who purchase the Taste pass also have the option to add on tickets for Friday night’s Taste of Texas event ($150) and/or Saturday night’s Rock Your Taco competition ($150).  The Savor experience includes priority access to all demos, tastings and hands-on experiences, private Grand Tastings on Saturday & Sunday, access to a VIP lounge with a bar and additional tastings, and access to both the Taste of Texas and Rock Your Taco evening events.  Tickets for Thursday’s Feast Under the Stars are $185 per person, including paired wine and parking, and are purchased separately from the festival pass at www.austinfoodandwinefestival.com/tickets.

All attendees must be 21 years of age or older.  For more information or to purchase tickets, please visit:

This Article Inspired by the latest Solo Release by Shana Halligan:

While higher-budgeted docs filled with even bigger names might elicit the awe of that Hollywood intangibility, Cawley’s down-to-earth subject matter, and even the subjects themselves, bring us into the story of our own lives. We don’t want to be the people on-screen, these celebrities of sight and sound and tactile surfaces, but rather we wish to paint the stars of our respective destinies with the footnotes of these men and women’s successes, failures, moments of elation, and of suffocating despair. They are, in a word, human.