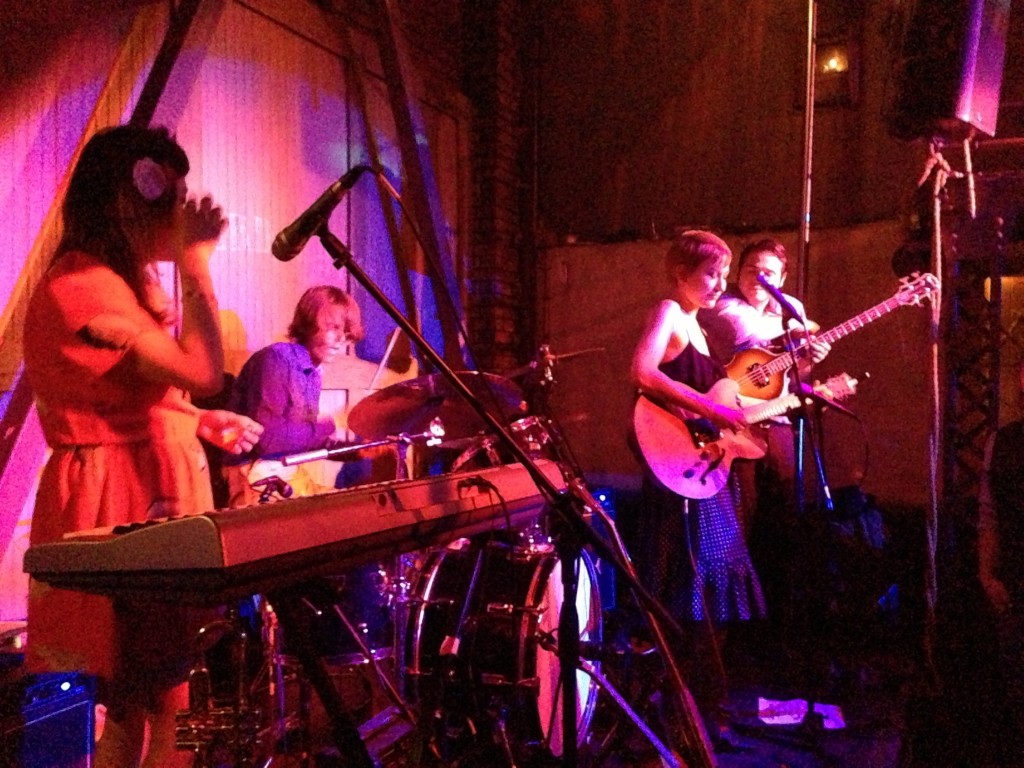 Scanning from side to side, as our GPS prematurely announces our arrival at Harvard & Stone, we spot an unassuming grey building with an illuminated wooden sign. Not having been to Harvard & Stone before, I knew based on my previous experience with The Houston Bros.’ lush Pour Vous and moody Piano Bar, that a seemingly simple exterior would probably give way to a intricately crafted interior. I was not disappointed.

As soon as I passed through the door, I was immediately reminded of the Boiler Room décor in Disney’s The Twilight Zone “Tower of Terror”, an example of cultivated antiquity: whiskey stained walls peeling away to ruddy brick, rusted and oxidized iron fixtures, tobacco tinged tufted leather and worn wood benches, liquor bottles illuminated by Edison bulbs caged in wire. Each element complementary, creating a space that oozes strong masculinity, yet remains approachable and familiar.

We arrive at 11:30pm, just when Sadie & The Blue Eyed Devils were finishing setting the stage. We weave ourselves in between patrons, bartenders swirling bottles into various concoctions, complicated movements performed with straight faces, and I wave and mouth hello to the band. Last time I had seen them perform was at our first official ATOD event at Pour Vous a few months prior, so I was eager to hear new arrangements and outstanding favorites.

Sadie & The Blue Eyed Devils have a look and sound that is almost indescribable, but the best way that I can put it is anachronistic, both in look and sound. All the band members dressed in 1930s and 40s inspired Goodwill chic, lead singer Sarah Coultas, with her short auburn hair, black ruffles and polka dots, Jazzmin Gutierrez in a red patterned dress with tulip sleeves and flower in her hair, Andres LaSource and Andrew Narvaez in blue button ups and khaki pants. The charm of their music is that it combines folky elements like banjo, kazoo, trumpet, and washboard with cheeky modern lyrics, and pop-like catchiness.
They started out with a slow, lilting ballad, bathed in rich blue and red light, building anticipation and excitement in the crowd that was growing in front of the stage. Andres nodded his head to the applause, finding the groove for the next song, and started thumping the bass drum as the other band members donned their new instruments. For me, that is the most awe-inspiring aspect of Sadie & The Blue Eyed Devils: that almost every single song, each member traded instruments seamlessly, everything from tambourine to ukulele to keyboard, showing that not only are they great at creating memorable music, but they are all multi-talented artists. Unintentionally, my body started to sync with the beat, beginning with my toes tapping, then hips swaying, and shoulders shimmying, the infectious rhythm spreading through the crowd until the whole group was moving. Sarah’s voice drips out into the microphone like honey, sweetening the deliciously dark lyrics of “Kiss the Cuts (Disco No. 6 for Charles Bukowski) as Jazzmin, Andrew and Anders moved in sequence with the pulse. Once the clapping quiets, Sarah announces that “Kiss the Cuts” and the tongue-in-cheek song “I’m Nobody’s Baby (& You Ain’t Nobody’s Fool)” are available to purchase on their official “double”, of which I highly recommend. That way, their finger snapping and toe tapping tunes can follow you home in entirety, instead of just a catchy chorus looping in your head.

Just as their set ends, music dissipates to the cheering crowd, the previously forgotten tiredness of a long day started to seep back into my ankles and shoulders. Anders ran off to the restroom, so I was unable to say goodbye, but I hugged Andrew, Sarah and Jazzmin, thanking them for a great performance. They are always so gracious and genuine, telling me how appreciative they were that I came to the show, but honestly the privilege is all mine. Sadie & The Blue Eyed Devils is a band that we at A Taste of Dawn love to support because they are artists pushing boundaries while staying humble, growing their fan base without compromising their integrity or vision. So, thank you to Sarah, Jazzmin, Andrew and Anders for being true to yourselves and being thoroughly entertaining at the same time. Thank you to Harvard & Stone, and the Houston Brothers, who have a keen eye for detail and a willingness to foster unique and unforgettable talent.

Fourth of July has been the annual…