The OC Fair: A Summertime Treat

Two different takes worth reading: 1) Nostalgia. 2) Enthusiasm that will have you laughing out loud. 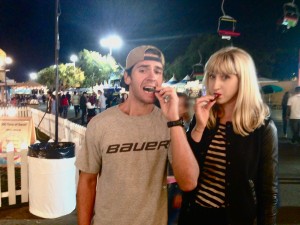 Squinting at the fading afternoon light shining through the spokes of the behemoth white Ferris Wheel, my parents, my stepbrother Danny, his friend Dave, and I entered the Orange County Fair. Although the evening was approaching, the asphalt was still warm, carrying the scent of sun-kissed straw, 8 hour hickory smoked tri tip, caramelized sugar, diesel fuel and sunscreen. Tents, stalls and booths were formed into rows, a vinyl rainbow. Goats and sheep bleat softly while nibbling on ice cream cones filled with animal feed. Snack vendors call out to passerby’s while smoke swirls from gargantuan grills layered with various browning proteins. ZZ Top is set to perform at the Pacific Amphitheater, so amidst the smattering of teenagers in cut-off shorts and parents toting oversized stuffed animal prizes, are men and women with salt-n-pepper hair halfway down their backs, who smell like motorcycle exhaust, leather and tobacco as they brush past on their way across the fairgrounds.

I’ve been going to the OC Fair as long as I can remember, but my Stepbrother Danny and his friend Dave who were out visiting from the East Coast never had, so it was exciting getting to introduce them to something so nostalgic.

After “scritching” some baby wallabies and having our clothes nibbled on by deer in the petting zoo, we decided we couldn’t resist the allure of the smorgasbord of food choices any longer. Instantly, Danny and Dave are submitting to the smell of Juicy’s, somewhat of a meat emporium, boasting glossy pictures of sausages the size of your forearm and pulled pork sandwiches overflowing with glistening barbeque sauce. Danny and Dave decide on sharing one of the massive “hot dogs”, almost a foot long, on a toasted white bun, loaded with grilled onions and peppers.

After being handed the hefty portion, Danny’s face went from slight bewilderment to contemplative joy once biting into the sausage, nodding in approval. After walking past a few more stalls, they decided their second course would be a Tri-Tip Sandwich from a different barbeque spot. At first, I thought I was going to survey the options before making my culinary choice for dinner, but gave in to the rumbling in my stomach and also ordered the Tri-Tip. It was simplicity at its best. A slightly toasted wheat bun with tender tri-tip, barbeque sauce optional. Despite the steep Fair price tag, it was completely worth it. The meat fell apart in my mouth, smoky and incredibly tender, and dipping it into the warm barbeque sauce added a citrus tang, as well as brown-sugary sweetness.

Part swap meet, part carnival, part exhibition, we passed by merchants selling everything from roasted pistachios, to Jacuzzis, to Reggae-inspired knitwear. We peruse the garden area, craning our necks to look at sunflowers the size of giraffes, and the impressively large speckled horns on Watusi cattle. On one of the small outdoor stages, a “live karaoke” band played. After watching a spray paint artist detailing a sugar skull portrait, my Mom and I decided it was time for the carnival rides.

The boys were still recovering from their veritable meat overdose, but my Mom and I were ready for our favorite ride: The Tilt-a-Whirl. Having done an experiment years prior testing the speed/spin dependent on a persons seating arrangement in the ride, we determined sitting as close together, pushed back against the center of the buggy is the most effective position for optimal turning. The lights on the rides and carnival games started flickering on, the denim blue horizon melting into inky indigo. As much as I enjoy rides, I don’t trust the stability of the upside-down rides (or other riders’ stomachs) at the Fair, so we chose to stick to relatively grounded entertainment. Except for DISKO: A giant orange wheel set atop what almost looks like a half-pipe, and on the circular platform are seats to straddle facing the outside of the ride. The two boys decide their dinner has settled enough, and join us. Holding onto the handlebars attached to the seat, a black back restraint springs up behind us like scorpion stingers, firmly pinning us in our places. The platform begins to sway back and forth in the crescent, swinging closer to the tops of each side with each pass, all while starting to spin. It is both a mixture of giddy, child-like excitement, watching the colored lights and faces blend, but also the terrifying feeling that you might fly off the side, despite being sandwiched in plastic and metal. We managed to survive.

Our final ride of the night was The Haunted Mansion, which was instantly appealing to me because the façade was a combination of seemingly random airbrushed horror movie monsters, and strobe lights. The ticket-taker shakes his head at the five of us, muttering that “it wasn’t worth the money”, but we board anyways. He was accurate. It was mostly dark with a few delayed screams following generic, emaciated animatronic ghouls, all of which lasted maybe a minute. But, you never know until you try, right?

Then it was dessert time. We debate on getting the “Maple Bacon Doughnut” to try for the novelty of it, but decided on the Chocolate Covered Bacon instead. The name of the stall was something like “Heart Attack Café” or a similarly comically menacing name, with menu items like gouda cheese stuffed Portobello mushrooms wrapped with bacon and “widow maker” garlic butter bacon fries, all of which actually sounded delicious. But, since I was too full (and had my heart set on a cinnamon roll) we just order the chocolate covered bacon. The pieces are a few inches long, with slight condensation from being frozen. Combination of dark chocolate and bacon bits, it is both richly sweet and salty. Although we all agreed the flavor was tasty, we were wishing it was literally a piece of bacon dipped in chocolate for maximum flavor, yet doing so would most likely increase the price three fold.

Then, it was cinnamon roll time. I had been hyping them up the entire outing, trying to veer us on their course several times in the evening, so I was hoping that they did not disappoint the boys. The cinnamon rolls are probably one of the most accurately priced and portioned morsels at the fair, a hearty golden brown rectangle smothered in warm cream cheese frosting. Crispy on the corners from the caramelized cinnamon sugar, and moist on the inside, it is tastefully decadent. The cream cheese frosting is not overly sweet and has a nice tang. Danny is so blissfully entranced by his roll, that when a piece of it drops on the ground, he swiftly scoops it back up and into his mouth, with the rest of us looking on in mild horror.

We said our goodbyes to the pygmy goats and the camels contentedly chewing their cud, the carnival lights twinkling against the black sky, yawns escaping our lips and paces slowing steadily until we reach the car to go back home.

We were there for almost 5 hours, yet only managed to see a third of the content. Whether you are a food, craft, animal, ride, or music enthusiast, there is something for everyone at the OC Fair.

So, as many of you know, I am a full-grown man. I chop wood, wear flannel, play a contact sport, drink beer, do dumb things with my friends, and eat an excessive amount of meat. I like to pride myself on my carnivore-like nature. Walking through the welcome gates at the OC fair, I experienced the beginning stages of a meat stroke. Then proceeding further through the smoke and smells of my paradise, I came to behold Juicy’s World Famous BBQ … They had an eighteen wheeler truck BBQ station, with over 300 turkey legs in sight, a brisket bigger than my torso, giant western sausages that could overflow an Olympic sized pool, and onions and peppers for days. I had mistaken the salivation in my mouth for awesomeness rather than realizing that I was slowly slipping into a food coma. I had a foot and a half long western sausage, humongous brisket sandwich, a tall-boy Long Board beer from Beers of the World, chocolate covered bacon, and the most delicious cinnamon bun that the universe has ever seen. All I wished though was that I would have remembered eating all of the delights, but I blacked out with excitement and I’ll just have to go do it all over again. Or … Until I can remember it. But that might take a while.

I also have been sort of inclined to create my own ride that supports the male anatomy, as the ride wrongly named the DISKO did not. I hope down the road I will be able to bare children, if you know what I mean. Also, another idea: A “Haunted House” that is not created in the back of a tractor-trailer and only 42 seconds long. I know it’s a transportation issue here “carnies”, but lets be real and step up the haunted house game.

After all of the food and ride sickness, Alexis and I ventured over to see the baby animals. I had an epiphany that I act like a goat for about 50% of my day. Standing on things, jumping around, walking like I am inebriated, eating every thing in sight (including clothing), and trying to head butt the people I am friends with.

Thank you, OC Fair, for making me realize that my life is worth living. Keep eating, keep smiling, keep laughing, stay manly, but most importantly live to be rad.