Shana Halligan Takes Our Breath Away at The Greek Theatre 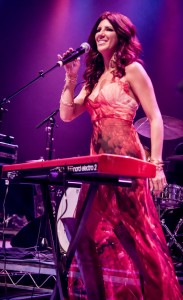 It was an unusually mild evening, the sun was cooperating giving pause to it’s overly inexhaustible temperatures, as the cool swift night air trickled over the hills of Griffith Park making its way to the illuminated sign. The sign?

Imagine a concert that just fills you up with the crisp melody of soul, sex, and a fluid movement that awakens every part of you – that is Shana Halligan’s performance tonight. While I was thrilled to also be seeing Morcheeba and Thievery Corp. perform, it was Shana that was the real draw for me. Having never been able to see her live in concert with Bitter:sweet, the anticipation of finally seeing Shana perform on the grand stage is building. My photographer, Clarence Alford, and I hurriedly make our way to will call, happily pick up our tickets, say hello to friends and to Shana’s husband Eric Kaufman, her infamous father Dick Halligan and his beautiful wife Marilu, and scurry towards our seats. Clarence researches where Press Photographers should be and I patiently wait. Shana is performing first and as the clock moves its steady hands towards show time, I feel the excitement begin to swell. First, Raul Campos of KCRW welcomes the crowd now slowly filtering in, filling in the red empty seats one by one. Suddenly I see Patrick Bailey, lead guitar, step onto stage in his artistic style; Nick Rosen then steps on with his upright bass nestled against his body; Davey Chegwiggen takes a spot in front of his percussion set, hat on and ready to go; Mr. Numberwonderful puts on his earphones and places himself in front of the DJ equipment, Stephanie Amaro de Abad comes up to the microphone and straps a guitar over her shoulder, and moments later out walks Shana. Like a statuesque Greek Goddess, her iconic deep red hair, and maxi dress flowing with reds and ambers, she is picturesque and the tone is set. Smile on, she steps up to the keyboard and begins with her new song, “Private Meeting”. The rhythm and sensual glide of the song is the perfect opener. She walks out from behind the keyboard to up front and center, gives a, “Hello Los Angeles! We’re so excited to be here!” – and you can feel it – and then she introduces the 2nd song, “True Love” off of the Paper Butterfly EP (Rob Garza also did a remix of this!). 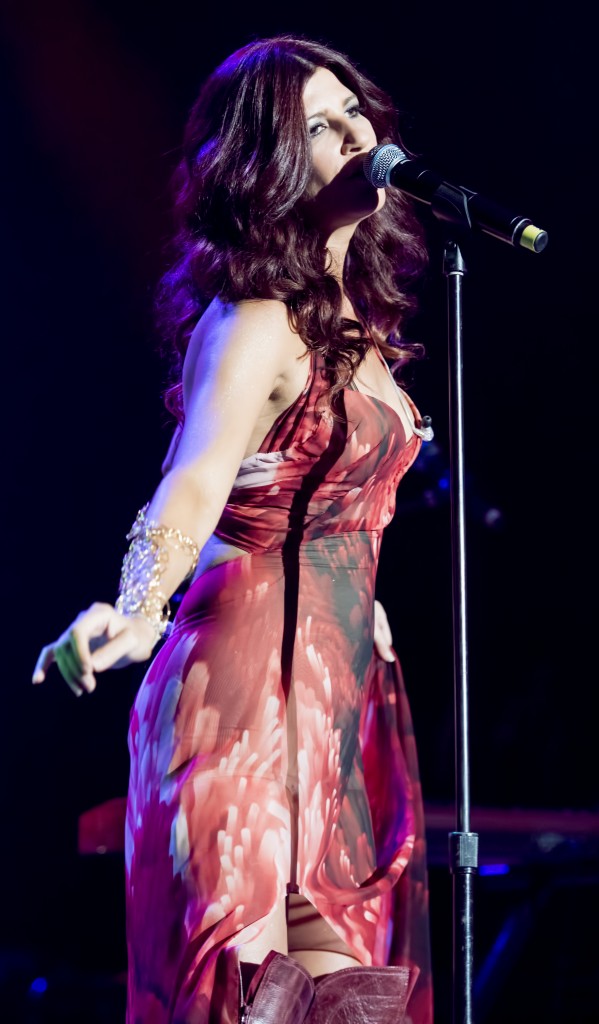 As the percussions pick up, her energy heightens, the beat floods the stage and as if on cue, everyone in the audience is moving. The 3rd song is “Unusual Day” followed by the cult classic, “Mating Game” and the entire stadium is up on their feet singing along, moving their hips as the undeniable intrigue of the song that has received just shy of a million hits on YouTube dances throughout the entire theatre. The set continues with “Repaved” and “Bittersweet Faith”. The final two songs are “Illuminate” and Bitter:sweet’s “Dirty Laundry”. However it’s “Illuminate” that really takes hold of me. The haunting sweetness of this song tells the tale of loving someone in spite of fear and the reality we can never be someone’s everything. One line in particular, “Since I met you I feel strong, I know how weak feels” shows yet another level of Shana’s vocal range with a subtle grit and soulfulness that soothes you and moves you at the same time. Joined by backup vocals, this is the song that really crept into me with its lyrics, the range of Shana’s distinctive voice, the sultry tone of Stephanie’s backup vocals, and music that begs you to follow along. Once Illuminate steals the show, she ends her set with the wildly popular, “Dirty Laundry” causing the audience to take the contagious energy and thrill of the music to the perfect finish. Throughout the performance, the new music has a certain excitement to it that makes me eagerly anticipate the release of the new album [EP]. The final performance of Shana’s came when Thievery Corporation invited her on to the stage for one final song. That was when the crowd soared with applause. Honestly, she stole the show!

It seems Shana Hallligan only gets better with time, her voice evolving with more range and heart than I have ever heard from her. The minute the new songs are released, I encourage you – no, I implore you to purchase the EP’s. They are exquisite. On a side note, there is a rumor floating around that Bitter:sweet is possibly getting back together. Stay tuned …

Father’s Day RoundUp – I write this to you from the perspective of a daughter but it is to every dad out there who knows how important your role as our example really is.