I had the pleasure of seeing a preview of the show opening at the Pasadena Playhouse this weekend. I was given the opportunity to sit down for one-on-ones with the Writer, Vanessa Claire Stewart, Director, Jaime Robledo, and the entire Cast of STONEFACE. The passion and love behind the birth of this show is what makes it so special. Vanessa Claire Stewart, French Stewart‘s (“MOM”, “Inspector Gadget 2“, “Third Rock From The Sun“) wife, wrote this play when her husband French told her his idol was Buster Keaton. He explained he had always want to play him but, as time marched on, felt he was too old to play the role. Alas, she disagreed and out of a sheer act of love and the hope of giving her husband his dream role, she wrote one for him. The play began with sell-out performances at the 99-seat Sacred Fools Theatre in Los Angeles where it won multiple Awards and stole audiences hearts. Now, as a natural progression, the Pasadena Playhouse has invited them to bring the show to a much larger 600+-seat theatre for a limited engagement. For anyone who ever loved classic cinema or believes in the beauty of physical comedy, the power of love, and the stories of friendship, this is a play you MUST see.

“I mean, I never thought I’d have all of this. Look at me! I’m 50, married to this incredible woman [pointing to Vanessa], have a beautiful little girl, work for Chuck Lorre during the day [MOM on CBS], and at night, I get to do this with all of my friends playing a character of a man I’ve admired all of my life. I’m living the dream!”

Opening this Sunday, the show runs for 3 weeks. Please see the information below to purchase your TICKETS.

THE PASADENA PLAYHO– — USE presents … 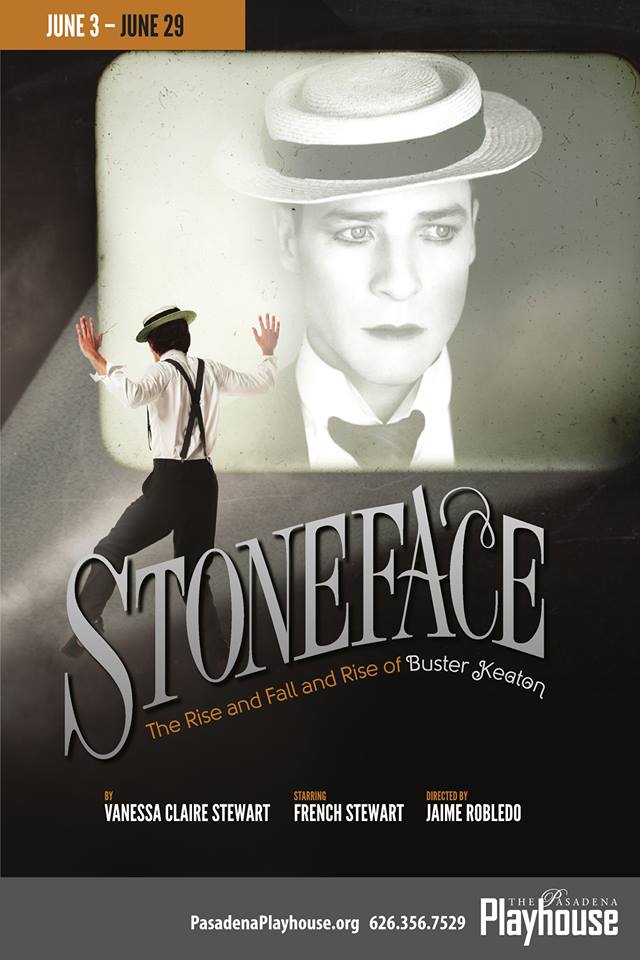 Writer Vanessa Claire Stewart (formerly Vanessa Claire Smith) starred in and penned the multiple award-winning Louis and Keely Live at the Sahara, which had a record-breaking run at the Geffen Playhouse in 2009 after originating at Sacred Fools Theater Company.

Chronicled through the lens of his own silent films, STONEFACE recreates some of Buster Keaton’s most memorable gags live on stage, capturing the legend of a bygone era and telling the tale of the redemption of one of Hollywood’s greatest performers. Following a successful engagement at Sacred Fools Theater Company this past summer, STONEFACE was designated a Los Angeles Times “Critic’s Choice” and French Stewart’s performance hailed as “… quite simply, a revelation.” LA Weekly said, “GO! … one of the best new works of the city’s theatrical season.”

In conjunction with The Pasadena Playhouse production of Stoneface audience members can enjoy an interactive installation in The Georgia T. McClay Friendship Center, created by Los Angeles-based theatrical, interior, and event designer Tifanie McQueen. The exhibit aims to enhance the audience’s understanding of Stoneface’s inspiration and history. Audience members will have the opportunity to “Be a Buster,” by taking a photo in a Buster Keaton style porkpie hat and “Try the Table” by experimenting with a contraption like the one seen in the dinner scene from “The Scarecrow.”

Daisy is the youngest actress ever to win a Tony Award for her performance as Mary Lennox in The Secret Garden (Drama Desk and Outer Critic Circle Award nominations). Most recently on stage she was seen in San Francisco, Los Angeles and New York in her third one woman show, One For My Baby, directed by Drew Droege. Other theater credits include Les Miserables (Broadway), James Joyce’s The Dead (Original Broadway production), the first national tour of Love, Loss, And What I Wore, Jersey Shoresical: A Frickin’ Rock Opera!, Be Aggressive (world premiere at La Jolla Playhouse, Garland Award honorable mention, and regionally at TheaterWorks), On the Mountain (world premiere at South Coast Repertory), A View from the Bridge (South Coast Repertory), The Wild Party (The Blank Theater Company. 2005 LA Weekly Award for Best Supporting Actress in a Musical) and a whole bunch of other plays and musicals. Her T.V. and film credits include “The Mentalist”, “Without a Trace”, “Ghost Whisperer”, “Numbers” and “The Unit”, “The It Factor”, “All My Children”, “Another World”, “Space Cases”, “Square One TV” “Losing Isaiah” (Paramount), “Ripe” (Trimark), “Tony n’ Tina’s Wedding” (Green Street Films) and “Judgement” (HBO). Daisy co-created, co-wrote and starred in “Krystal Park”, a soap opera set in a trailer park, pieces of which can be found on YouTube.

Jaime Robledo most recently directed the West Coast Premiere of Edward Einhorn’s adaptation of Do Androids Dream of Electric Sheep? which garnered 8 LA Weekly Theater Award Nominations including Production of the Year and the sequel to 2010’s Watson entitled Watson and the Dark Art of Harry Houdini. The original Watson won him an LA Weekly Award and an Ovation nomination for his direction and the Saturn Award for Best Local Stage Production as well as being named one of 2010’s top rated new plays in Los Angeles by Bitter Lemons. His direction of the Sacred Fools production of Stoneface: The Rise and Fall and Rise of Buster Keaton earned him an LA Weekly Award for Best Director.

The cast of STONEFACE for The Playhouse presentation features (in alphabetical order):

Conor Duffy as Edward Sedgewick/George Jessel (Stage: Stoneface Film: “From a Place of Darkness,” “Falling in Love with the Girl Next Door,” “The Break Up.”)

Pat Towne as Louis B. Mayer (Stage: Stoneface,Frank Zappa’s Joe’s Garage (winner of two LA Weekly Awards,) Hoboken to Hollywood, winner of the 2011 LA Weekly Award for Musical of the Year, Gorey Stories (Ovation Award for Best Musical in 2005) founding member, Managing Director of Chicago’s Annoyance Theatre (Pat also originated the role of Greg in the Annoyance’s production of The Real Live Brady Bunch, and eventually went on to direct the show Off-Broadway.)

Tuesday through Friday evenings at 8:00 p.m.

SAN SEBASTIAN, SPAIN – Juan Mari Azrak and Elena Azrak Espina work in tandem. A Father and Daughter duo, their cuisine has taken Spanish fare to an entirely new level. First introduced to them through research, it is their passion, their quest, their innate desire to bring new life to cuisine that cultivates authenticity, fresh high-quality ingredients, and an ever evolving willingness to surprise that endeared me to want to share them with you.