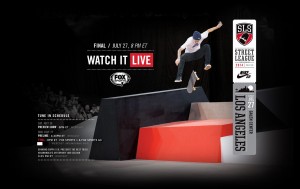 Rarely do I post about sports – BUT – I will be interviewing Skateboard Champions, Chris Cole and Sean Malto as well as newcomer-turned-Finalist, Matt Berger and would like to invite you to take part in a little bit of sports history.

Founded by pro skateboarder Rob Dyrdek in 2010, Street League Skateboarding (SLS) was created to foster growth, popularity, and acceptance of street skateboarding worldwide. Since then, SLS has evolved to become a platform that serves to excite the skateboarding community, educate both the avid and casual fans, and empower communities through its very own SLS foundation. In support of SLS’ mission, Nike SB joined forces with SLS in 2013 to create the SLS Nike SB World Tour.

To further raise the profile of street skateboarding, SLS begins a new multi-year television partnership with FOX Sports 1 for 2014. All SLS events will get extensive international coverage on FOX Sports 1, with additional live coverage on StreetLeague.com.

As the premier competitive series in skateboarding, the SLS Nike SB World Tour elevates street skateboarding and showcases an international roster of skating’s elite pros as they compete in an easy-to-follow, instant-scoring format.

At each stop on the tour, world-famous arenas are transformed into custom concrete skate plazas, challenging the pros to raise their skateboarding to new highs as they compete for the largest prize purse in skate history—more than $1 million dollars.

The winner of each tour event receives a “Golden Ticket” guaranteeing them a spot in the 2014 Super Crown World Championship at the Prudential Center in Newark, New Jersey.

Only eight pros qualify for the final event of the 2014 SLS Nike SB World Tour and get the opportunity to claim the title of Street League Super Crown Champion.

Throughout the year, the SLS Foundation also aims to empower communities with the mission of helping to build free, public skate spots, as well as create new SLS Certified Skate Plazas capable of hosting future events and additional league programs.

Austin is a city I have come to adore. The culinary prowess of the chefs, the relaxed and confident vibe that finds it’s way from kitchen to plate, the absence of arrogance, the curiosity of experimentation – it’s what makes Austin, AUSTIN. A landscape I must admit is one of the most colorful in terms of flavor and innovation. While I have posted about the Food & Wine Festival this year, there were moments outside of the Festival where I was able to sit down with so many remarkable chefs and visionaries and do a private tasting. One such tasting was with the Carillon’s Chef, Josh K. Watkins.