SAN FRANCISCO,  MAY 12 —  Robots are massing and drones are abuzz as Betabrand kicks off the tech world’s foremost fashion spectacle. The online retailer is giving a runway to makers, hackers, and wearable technologists — clothing designers too!

With drones and robots, you will find your fashion sense and tech curiosities stirred!

The festivities begin with the world’s first e-bike commute, a pilgrimage of 50+ electric cyclists and skaters led by GenZe, makers of electric scooters and bicycles.

This amped-up pack will ride from San Francisco’s Embarcadero to Silicon Valley Fashion Week’s main stage at the Chapel in the city’s Mission District. 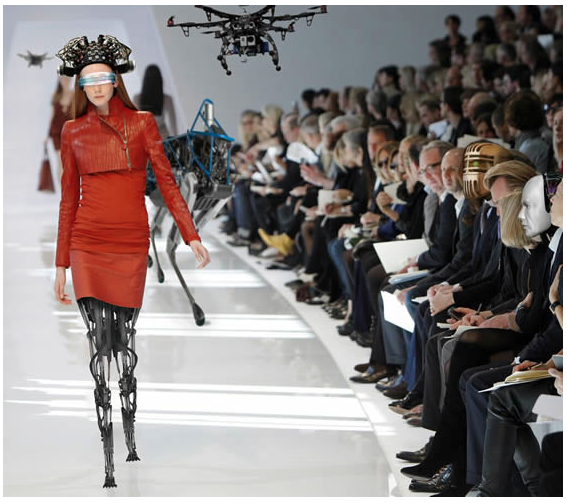 Wednesday night’s theme will be Wearable Tech, while the Thursday finale will showcase crowdfunded fashion.

Says Betabrand founder Chris Lindland, “With technology in every pocket and soon every wrist, Silicon Valley has an outsized impact on the way people look and experience the world.  Why, the next Karl Lagerfeld is likely staring into a computer, drinking his 4th Red Bull right now!

The event sold out (1200 tickets) in a matter of days. And drones are diligently preparing to replace models on the runway; watch as these garments dance gracefully through the air in ways Gisele Bündchen never could … unless she were juggled by a cyborg Tom Brady.

Arthur Waugh is a poet and documentarian whose works were found in literary journals in the 60s, 70s, and 80s. He is also my father. On May 18th 1988, on the cusp of having his first book of poetry published, this book, Orion in the Tradewinds, he suffered two massive cerebral hemorrhages leaving him with extensive brain damage, short term memory loss, terrible aphasia, and an inability to do the thing he loved most — write poetry.