Last night, another truly great film won an Oscar. I had the pleasure of screening this movie at the Oscars Symposium this past Tuesday. Remarkable animation, this is a heart warming and heart-wrenching story with a statement appealing to humanity. Writer, Director Gabriel Osorio + Pato Escala told a story of Chilean exile in a beautiful way that leaves a lasting impression.

SYNOPSIS: Every day, a melancholy old bear takes a mechanical diorama that he has created out to his street corner. For a coin, passersby can look into the peephole of his invention, which tells the story of a circus bear who longs to escape and return to the family from which he was taken.

These are the first Academy Award nominations for Gabriel Osorio and Pato Escala. 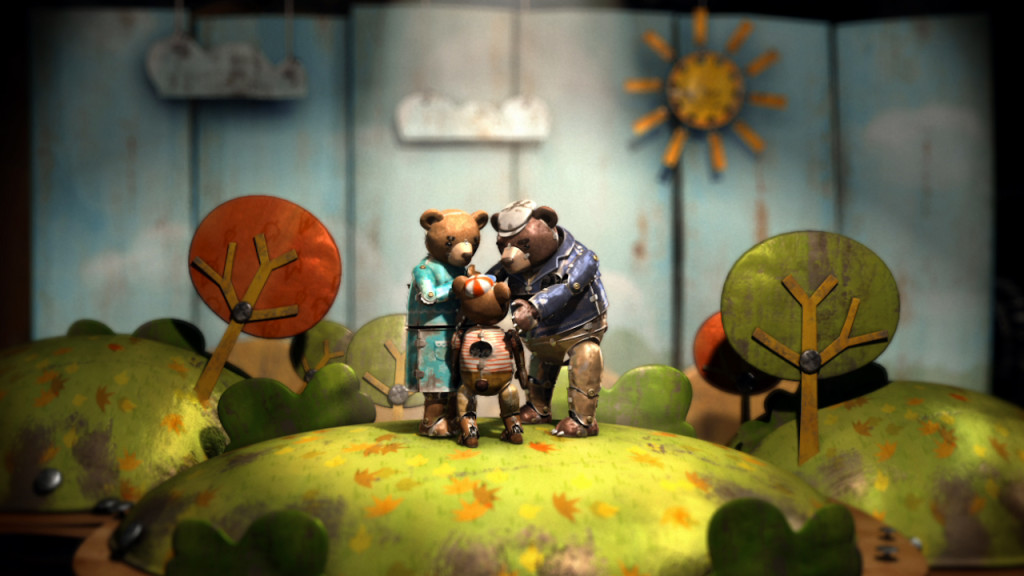 PATO ESCALA:
Wow.
GABRIEL OSORIO:
We are really happy right now. We want to thank the Academy, our families and everyone in Chile that have supported us and trust in our work. Personally I want to dedicate this achievement to my grandfather, who is the one who inspire this story and to all the people like him who have suffered in exile. We really hope that this must never happen again. Thanks.
PATO ESCALA:
Thank you all. We are from a small country called Chile. This is the first Oscar for our country, so this is very important for us. Thank you all. Un gran aplauso para todos. Viva Chile!
Thank you scroll:
Gabriel Osorio & Pato Escala would like to thank:
Our families, our sons Samuel and Pedro Escala, and Bruno Osorio. To Leopoldo Osorio, who inspired this story. To everyone who believed in our project, especially the Chilean Government and UDLA-Chile. To Banco Estado, Brooks Brothers and Latam for their support. To our friends and to every person who is or has been a part of the Punkrobot Studio team. To the Chilean Animation Project and the Latin American Animation world. THANK YOU SO MUCH!

Q. Hello, congratulations.  BEAR STORY was released in theatres across America and Europe through a Shorts HD release of the Oscar‑nominated short films.  How important is it for you, as short filmmakers, to have your film shown to a wide audience in theatres?

Q. Firstly, congratulations.  First Oscar for Chile.  I’d like to ask, obviously diversity, being a big topic in this year’s Oscars, 88th Oscar Academy Awards.  And what ‑‑ do you think that short film is a more diverse category and if and how, why?

A. (Gabriel Osorio)  Well, I think we, as you said, it’s the first Oscar for our country, so we just want to say #OscarSoChilean.

Q. I’m Peruvian, but I’m still happy for you guys.

A. (Gabriel Osorio)  Hey, we are all Latin Americans.

Q. There’s a lot, like, knowing these movies, even being nominated talking about like political issues and social issues.  There’s a lot of turmoil right now with immigrants here in this country.  There’s a lot of changes in South America, too.  And I know for a fact that Pinochet still has a lot of fans all over Latin America.  The movie is based on something that happened with this ‑‑ it’s related to this guy, so what do you think these type of movies, even being animated movies, can do for making people aware of what will happen if something like this comes back?

A. (Pato Escala)  My personal hope is that, I know it sounds maybe ingenuous or innocent ‑‑ that’s the word I was looking [for] ‑‑ maybe a lot it’s innocent, but we really hope that we can get this message to the next generations, to kids, so they cannot make the same mistakes again.  So that’s really our hopes as animators, as communicators and as filmmakers.

Q. Hey, guys, congratulations.  You guys are one of two films from South America nominated in the animation categories.  Maybe can you talk a bit about sort of what inspired you to get into animation and what makes it the medium that you guys want to explore from anywhere in the world?

A. (Gabriel Osorio)  Point of view.  So, that’s why.  We want to bring you like what’s happening in Latin America right now, what happened before, what’s going to happen in the future.  And it’s incredible, you know, for the one of you that ‑‑ that has been to Latin America you are going to understand me.  It’s very unique.  It’s very different.  And for those who don’t know Latin America, please be our guest.

Q. Congratulations on your award.  Thirty percent of our audience is in western Africa and in Brazil and South America.  What would you like to do to see a collaboration between African American filmmakers and documentaries and the Latino community?

A. (Pato Escala)  I think that’s great in terms that we all can bring new perspective, new visions.  It’s great you know because for us it’s something that we have in ‑‑ in ourselves that it’s really common for us, our culture.  But bringing that culture here is something that I think is new and fresh.  So yeah.  I think that bringing different cultures is great, it’s perfect.

[Both winners speak in Spanish.]

These transcripts may not be reproduced except as brief quotes used in conjunction with news reporting about the 88th Academy Awards®. All content Copyright 2016 Academy of Motion Picture Arts and Sciences. “Oscar®,” “Oscars®,” “Academy Awards®,” “Academy Award®,” “A.M.P.A.S.®” and “Oscar Night®” are the trademarks, and the ©Oscar® statuette is the registered design mark and copyrighted property, of the Academy of Motion Picture Arts and Sciences. Additional information regarding the “Terms & Conditions of Use” and “Legal Regulations for Using Intellectual Properties of the Academy” may be accessed online at http://www.oscars.org/legal

Joanna Going … on Life, House of…