T his year it was a Live Action Short, STUTTERER, that stole my heart and the hearts of every theatre goer at nearly ever Film Festival around the globe. Ben Cleary, Shan Ogilvie, Serena Ermitage, Nico Casal, and Michael Paleodimos took home the golden statue tonight and I couldn’t be more proud!! When I first saw the movie, I called it an Oscar Contender. This film is too phenomenal to ignore!

Below is their transcript and their thank you list (beyond grateful to say they included me in that)! When you watch something as wonderful as this film, it’s impossible not to want to do whatever you can to make sure everyone you know sees it. I didn’t expect such a lovely gesture as to be included in their “Thank you’s” but it means the world to me. Thank you to Ben and the crew.

Thank you Academy for seeing the brilliance the rest of us saw!

To the cast and crew of this movie: CONGRATS!!!! It is well deserved!

NOTE: The 1st friendI knew that won an Oscar was: Sebastian Junger for his Documentary Feature Film Restrepo + Korengal {Nominated}. 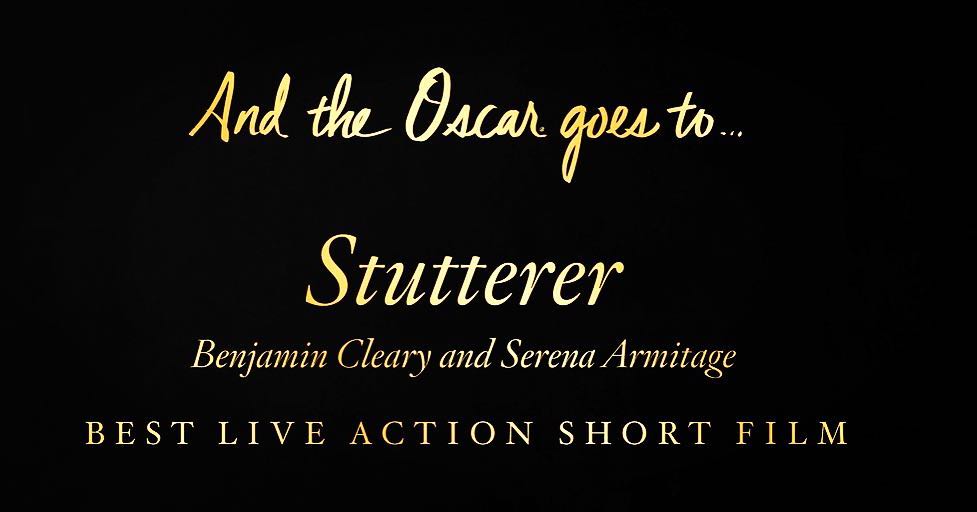 Q. Congratulations.  And I wanted to ask, how did the ShortsHD, the actual compilation of the Oscar‑nominated short films help towards your campaign for this Oscar Short and what did it make you feel seeing your short film on the big screen in a cinema?

A. (Benjamin Cleary)  It was amazing, yeah.  No, absolutely.  And the other four films that were in my category, we’ve sort of ‑‑ we’ve seen it a few times now at different screenings and stuff, and they’re beautiful short films.  And even to be in the same kind of conversation, the same categories as them has been an honor.  And ShortsHD has been amazing and to getting it all over the country, so it’s been an honor, too.  And I think that’s ‑‑ is that answering the question?

A. (Shan Christopher Ogilvie)  It was incredible to see it with like friends and family in your sort of hometown, and certainly ShortsHD, that did that.  And seeing it in context, it was almost like seeing it for the first time again.  I’ve seen it many times at festival but seeing it with the other short films.

Q. It’s been an extraordinary awards season for Irish film, two Irish films nominated for best picture, Fassbender and all the rest.  At the end of it all you’re the winner, you’re the Irish winner.  What message do you have for the nation?

A. (Benjamin Cleary)  I think you said the winner, but I think for Irish film we’ve had an amazing year this year.  I saw ROOM and BROOKLYN in Savannah back in October at the Savannah Film Festival, and two films that I thought were incredible.  ROOM I watched and cried about three times and tried to hide it from my friends while we were watching.  And, you know, really, really amazing films.  I think we might have won an Oscar tonight, but I think in terms for Irish film, getting nominations like this is a win.  And, you know, I feel incredibly honored to be mentioned in the same conversations as these films.  And so, you know, I think a great year for Irish film and, you know, long may it continue, and hopefully it’s the start of something that’s going to continue on and keep going from here.

Q. What do you guys love about being storytellers?

A. (Benjamin Cleary)  That’s a deep one.  I don’t know, I suppose it’s when you come up with a script and you pour your heart and soul into it, and luckily sometimes you get people who you show it to and they join in, like Shan and Serena, the other producer.  They start to share your vision.  They start to say with five grand we can make this happen, and that’s a rare thing.  And it’s a great thing, and it’s something that I was just so lucky to have with this.  We started this as friends, it started so small, and it was amazing to have people who just supported the vision and wanted to make it happen as much as I did.  I think that’s all I can really say.  It’s like ‑‑ I feel genuinely honored to have shared this with five or six best friends.  And we’re here now and we never thought this was going to happen, and we never thought our little film would get here.  So I think anyone can do it if you’ve got people like this behind you.

A. (Shan Christopher Ogilvie)  I think for me film had quite a big impact on me sort of growing up and it actually had quite a transformative effect on me as a person.  So for me as a storyteller, the goal is to be able to touch someone and to actually impact their life in a way that actually changes them in some way, changes their behaviors, changes their thoughts.  And we’ve had some of the most amazing feedback from people that come up to us, and like, you know, this is amazing.  Festival wins are amazing, but nothing compares to when someone comes up to you after watching the film with, like, water in their eyes and genuinely thanks you for that.  It’s incredible.

You know, when you make your, your first ever film, you’ve gotta convince a lot of people to jump on board and take a risk with a first-time director, and, you know, to every single member of the cast and crew of “Stutterer” for jumping on board and taking that risk with me I’m forever grateful. And to the Academy for this award. It’s such a huge honor. Thank you so much. To my amazing parents for all the support, thank you. Chloe Pirrie, you’re amazing, wherever you are up there. Matthew—to the wonderful Matthew Needham, you are this film, brother, thank you so much. Every day is a proud day to be Irish, but today even more so than usual. To everyone for all the support back home, thank you so much.

On behalf of myself and Shan who produced this film with me, we just want to thank Ben for bringing on this journey, and to the Academy for honoring short films. Thank you.

These transcripts may not be reproduced except as brief quotes used in conjunction with news reporting about the 88th Academy Awards®. All content Copyright 2016 Academy of Motion Picture Arts and Sciences. “Oscar®,” “Oscars®,” “Academy Awards®,” “Academy Award®,” “A.M.P.A.S.®” and “Oscar Night®” are the trademarks, and the ©Oscar® statuette is the registered design mark and copyrighted property, of the Academy of Motion Picture Arts and Sciences. Additional information regarding the “Terms & Conditions of Use” and “Legal Regulations for Using Intellectual Properties of the Academy” may be accessed online at http://www.oscars.org/legal

he moment Orange Is The New Black…