One of China’s leading contemporary artists, Lan Zhenghui will next embark on a U.S. tour featuring a residency in New York and university lectures in multiple cities across the United States 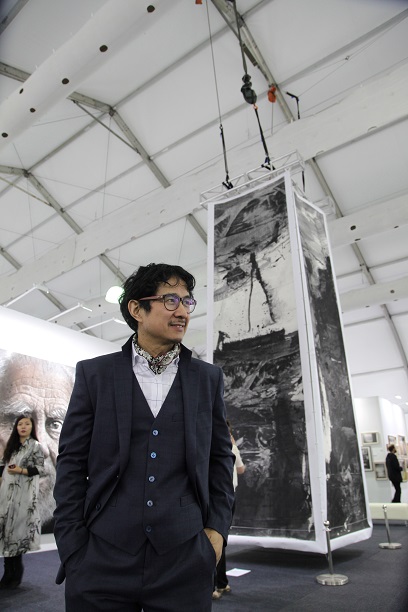 We had the pleasure of meeting Artist Lan Zhenghui two years ago at the LA Art Show. Endeared by his passion, we talked with him for a while. It is clear that his passion to create stems from a place of love and emotional depth.

The artist created his new master-work to express the power of sadness and an epic awareness of tragedy. After Hong Kong Art Week, Lan will next embark on a U.S. tour that includes a second residency at Mana Contemporary co-sponsored by Ethan Cohen Fine Arts, and university lectures in multiple cities. 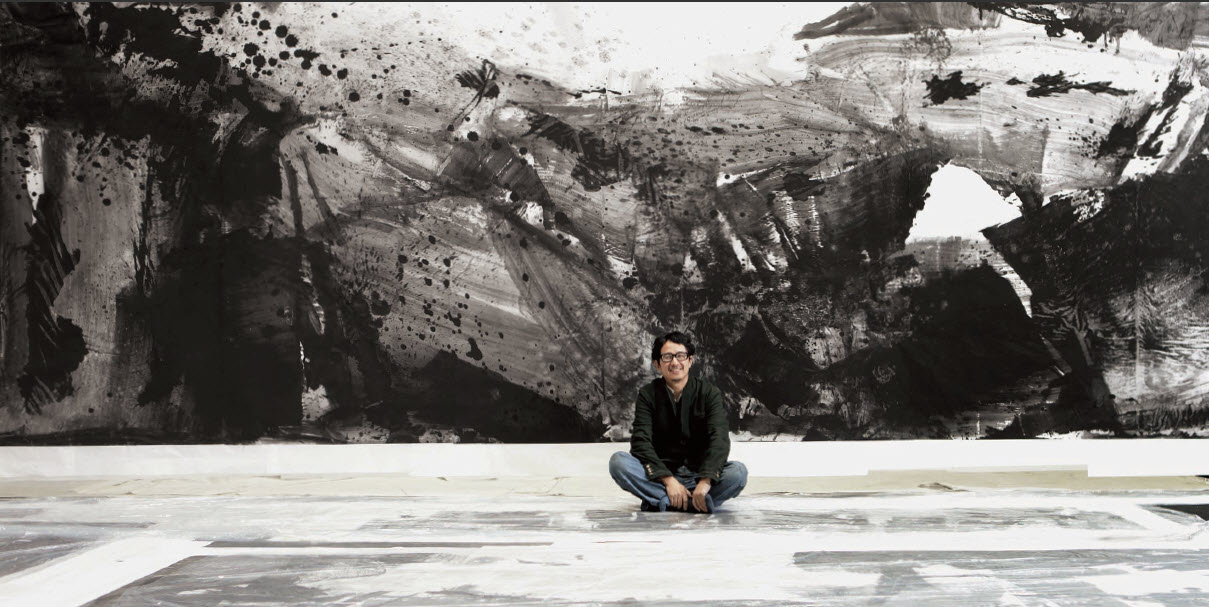 Lan is renowned for taking the freehand strokes of traditional Chinese painting to new, monumental levels by infusing them with the abstractions and expressiveness found in modern painting.

“The focus of my work is the profound consideration and the emotion of the ink,” says Lan Zhenghui.

“What makes this new installation completely different for me is that I have been challenged by dimensions required by the selection committee and translating this into the necessary sense of space – to then construct a dignified phenomenon of transcending tragedy, representing the mortality we all face. I would have liked to reach higher to even greater heights.” 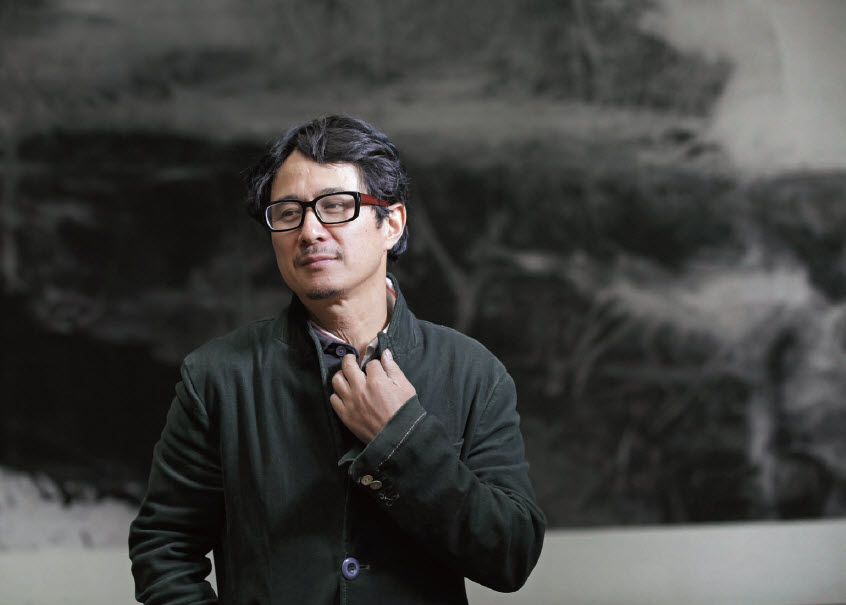 The source of the Lan’s inspiration is derived from ink. Occupying the aesthetic confluence between traditional Chinese Ink painting and Western abstract expressionism, Lan Zhenghui’s work reinvents both.

He lets the ink follow and discover its own momentum in bold, kinetic, strokes. He has liberated ink from being determined by form. But the spirits of Chinese landscape linger like ghosts in the canvas. They haunt both the process – the brushstrokes, the vectoring – and the resulting shapes. Mountains, rivers, storms, even figures, surge and evaporate subliminally. 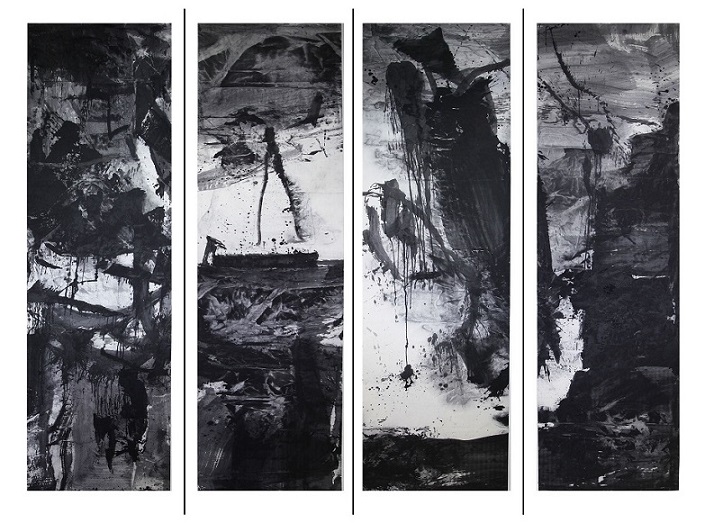 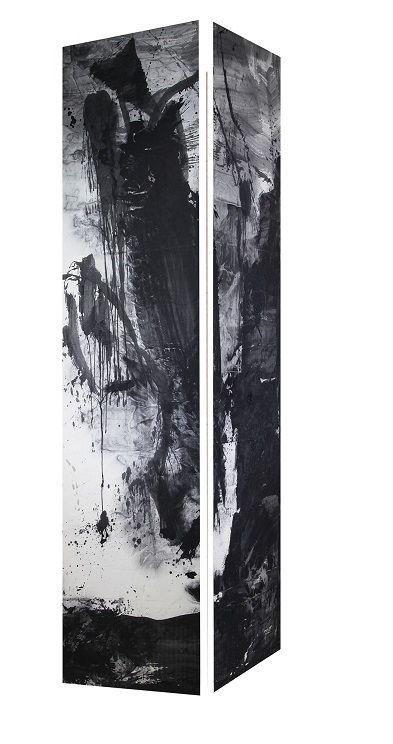 Purveyors get a closer look … 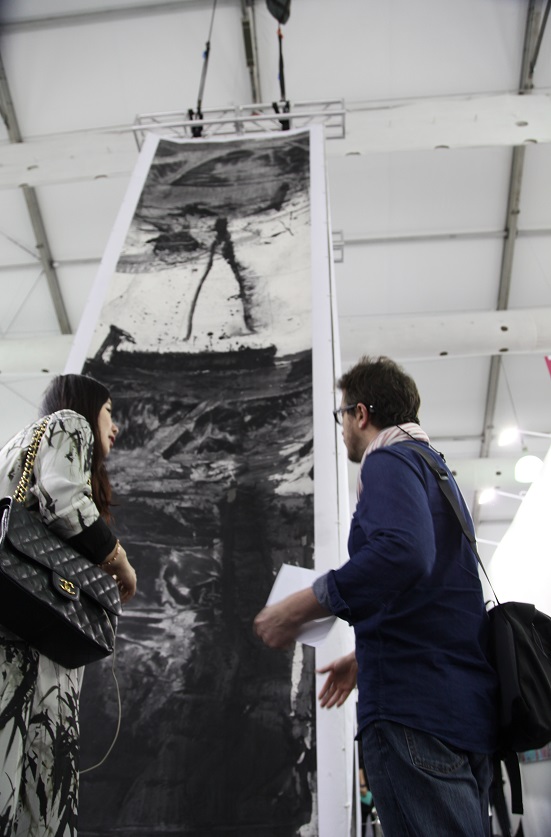 Born in Sichuan China in 1959, Lan graduated in 1987 from one of China’s most prestigious art academies, the Sichuan Academy of Art (famous alumni include Zhang Xiaogang and Zhou Chunya).

He has focused his career working in contemporary ink painting and calligraphy, and his powerful ink movement is based on more than 20 years of passionate research for his vision of constructing art via ink traditions in new ways.

Known for monumental, large-scale abstract ink paintings, Lan’s work departs from Chinese ink traditions through his raw individualism, (a rarity in China), emotional expressiveness, and physicality. This results in bold, varying densities of ink application and the artist splashing ink directly onto the paper. Preferring a freehanded approach instead of a brushstroke, in 2000 Lan launched the “power brush” movement.

Most recently, Lan’s work is featured in the U.S. in the national traveling exhibition titled
28 Chinese, an exhibition of Chinese artists gathered by American collectors Don and Mera Rubell after ten years of visiting artist studios in China. The traveling exhibition was launched during Art Basel Miami Beach and has traveled to the Asian Art Museum in San Francisco and the San Antonio Museum of Art, and plans to continue traveling the United States throughout 2017. 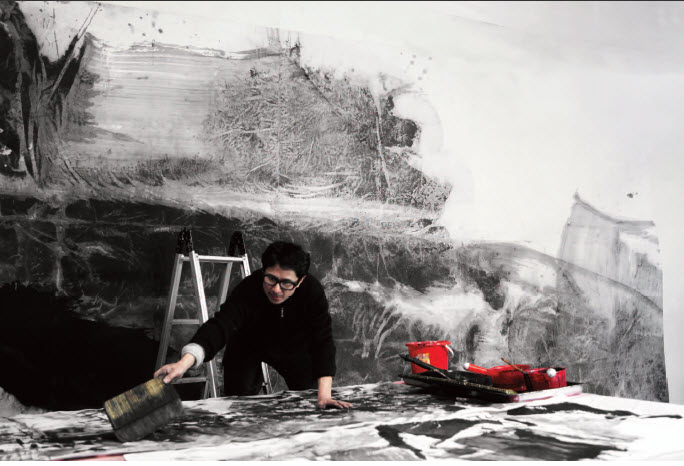 Lan’s work has been shown at the China National Art Museum in Beijing; at China’s Guangdong Museum of Art; the Gallerie du Monde Hong Kong; The Third Biennial China-Italia in Turin, Italy; the Flemish Museum of Art Museum in Brussels; the Art Institute of Chicago; the International Art Expo in Taibei; the Duolun Museum of Modern Art in Shanghai; at Art Dubai; SDMOMA, Shanghai, China; and the Baden-Wurttemberg in Germany. 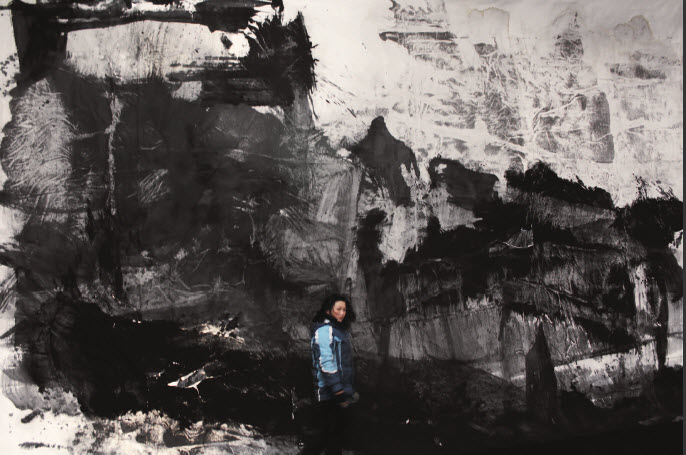 Lan’s work appears in the public collections of the China National Art Museum in Beijing; the Consul General of the British Consulate at Guangzhou; the Chinese Cultural Centre of Toronto, Canada; and the Artron Group of China, among others. He is represented by Ethan Cohen New York and Canadian Fine Arts in Toronto.

The artist has been selected by some of the world’s leading luxury brands for special projects, including Mercedes-Maybach and Volkswagen Phaeton. For 2016, Lan has been awarded a returning second residency at Mana Contemporary and has been asked to lecture at universities throughout the United States.


Art Central, Hong Kong’s contemporary art fair with a distinctly Asian focus welcomes thousands of collectors, VIPs and Hong Kong’s social elite. Billed as one of the most anticipated events on the city’s cultural calendar during Hong Kong Art Week. This year the fair welcomes over 100 hand-selected galleries from 21 countries, 75% hailing from 23 cities across greater Asia as well as 30 new names never before seen in Hong Kong.  Housed within the city’s largest ever, architect-designed temporary structure, the fair will produce a dynamic program that includes interactive installations, cutting-edge new-media, engaging panel discussions, and host some of Hong Kong’s hottest eateries.

Shall We Start With An Aphrodisiac? written…