Patricia Gucci, In The Name of Gucci

Patricia Honors Her Father, Aldo: The Man, The Father, The Brand

Gucci is a name synonymous with taste, fashion, and sophistication. It is an iconic brand as well as an iconic family. This Father’s Day, Patricia Gucci is sharing the story of her parents love affair with the world. In her memoir, “In The Name of Gucci”, Patricia chronicles her life, her parents love affair, and the secrets that existed before they were finally brought into the light. It’s a candid look at love, family, life and business. We had the pleasure of interviewing Patricia to get a truly unfiltered look at the beauty behind her story …

The gripping family drama—and never-before-told love story—surrounding the rise and fall of the late Aldo Gucci, the man responsible for making the legendary fashion label the powerhouse it is today, as told by his daughter.

As I read through your interview for the book, one statement really stood out:

“Aldo Gucci had created a marketing phenomenon that would withstand the test of time.” – In today’s ever-evolving world of fashion and design, I think there is a desperate need for timelessness. What do you think differentiates that timeless appeal your father was instrumental in creating versus current trends?

In the 1950s and ’60s it was arguably a lot easier to make your mark, there was less competition and more opportunity to create somehow.  With that said, there was also the risk of venturing into the unknown, of doing something that had not been done before.  The Gucci crest, the association with equestrian heritage, the GG insignia and, above all, the dedication to quality my father instilled in the company ensured that the brand would survive the trends of future generations. 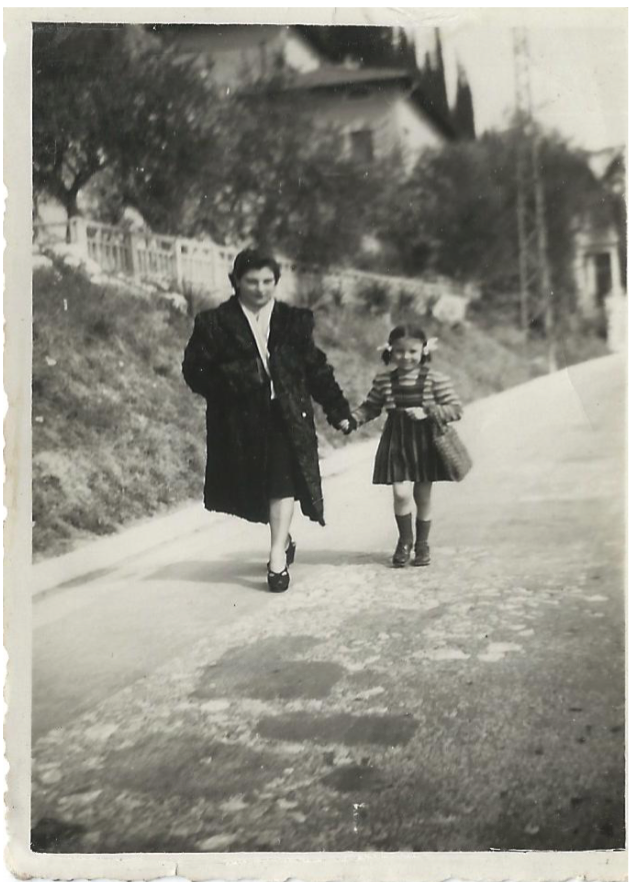 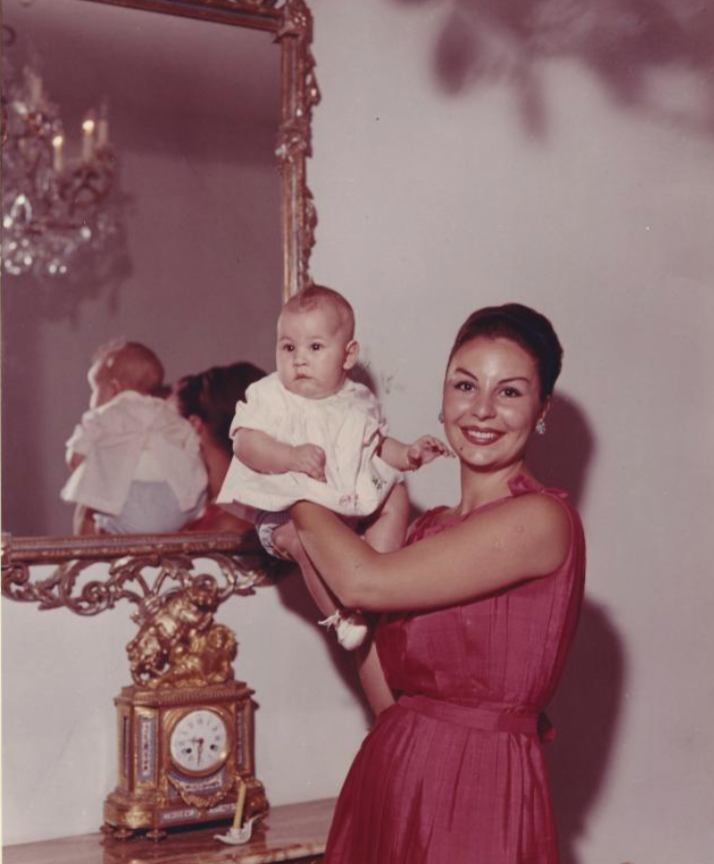 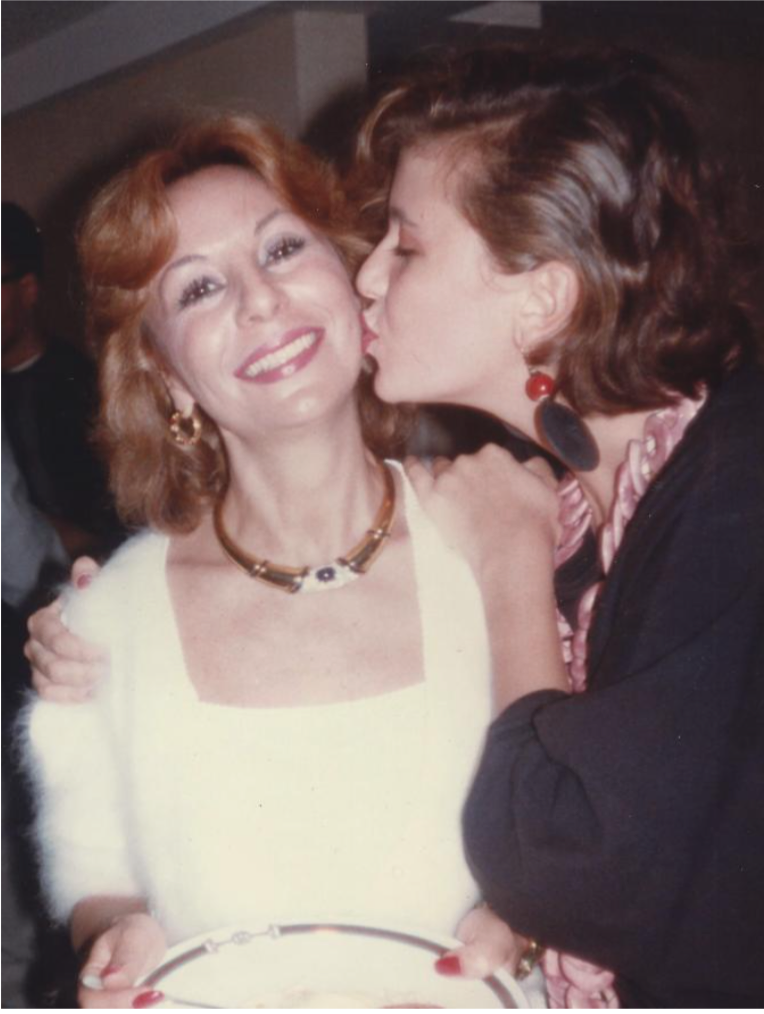 What is one of your fondest memories of time you spent with both your father and mother?

The 1970s in Palm Beach were a magical time for us as a family.  My father was able to relax there like nowhere else and my mother felt free and easy.  That is my fondest memory – being free and easy with my father and mother.  I couldn’t have asked for anything more.

What is something your father always told you that stuck with you that you think of or defer to, now as a mother yourself?

It wasn’t so much what he said to me personally over the years that stuck, it was the praise he gave me in front of others – at the end of a fashion show, completing or recognising me in his speeches, like on my eighteenth birthday.  Praise is important for children and, along with a sense of responsibility, I express that as a mother.

While you were under a gag order, what was one of the most challenging aspects of knowing there was a story to be told and not being able to tell it?

Having to stand idly by while my father’s legacy was being swept under the rug was difficult but in retrospect had I told the story in those years the tone may have been different. Time heals everything and also on a personal level I felt I had reached a certain maturity that allowed me to talk about the past in a balanced and more objective manner.  The time was right.

Of all of the love letters from your father to your mother, was there any particular one that really impacted you?

Yes, the one where he is supplicating her to reconsider getting married to Pietro and saying he felt “alone in a storm” and determined to “fight for a life worth living.”  It really brought home just how important she was to him. 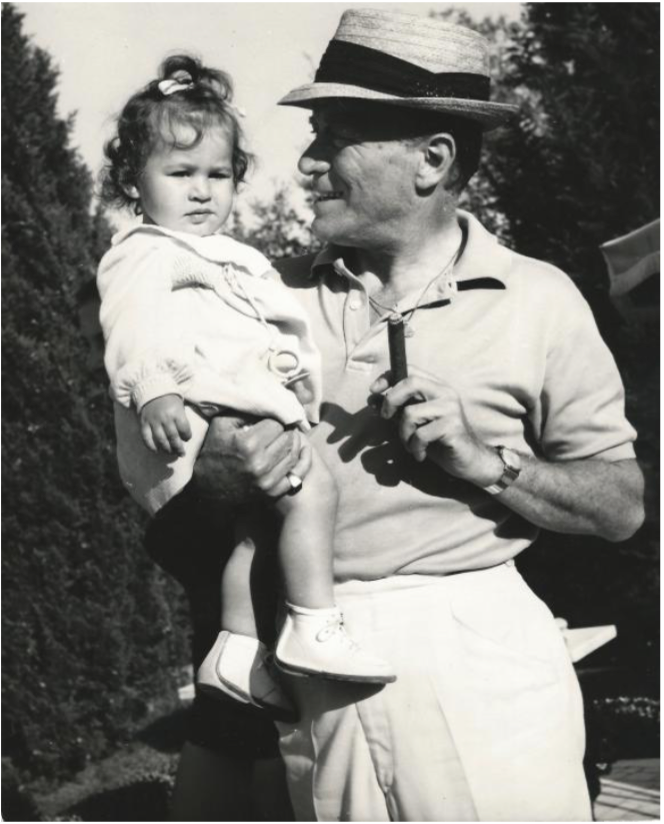 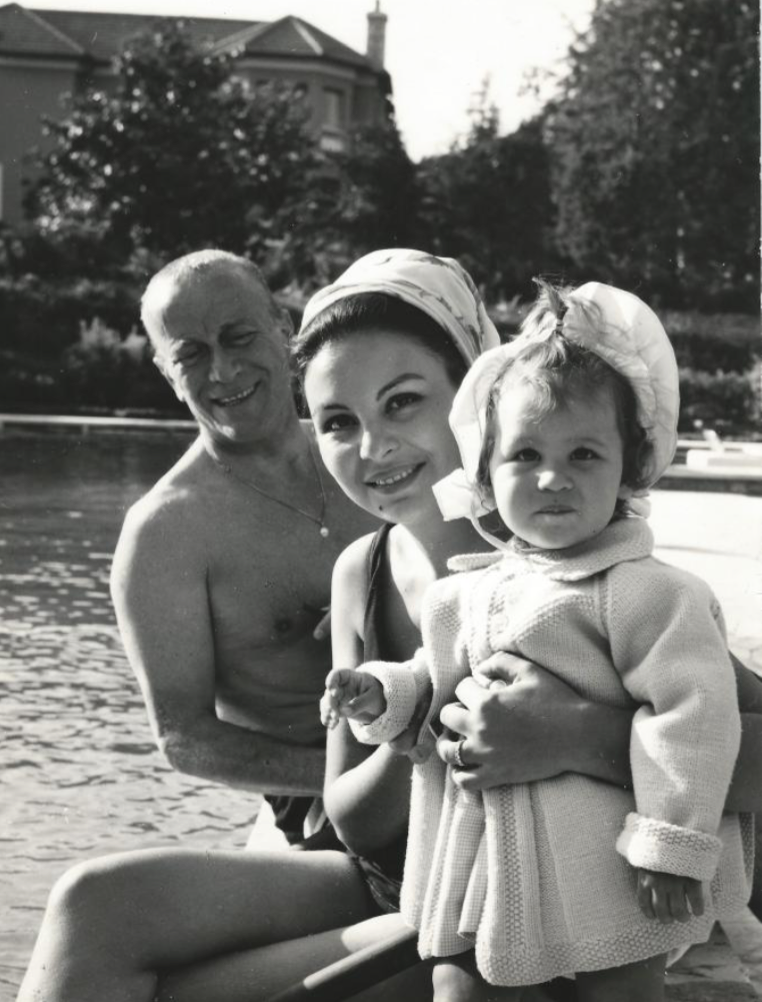 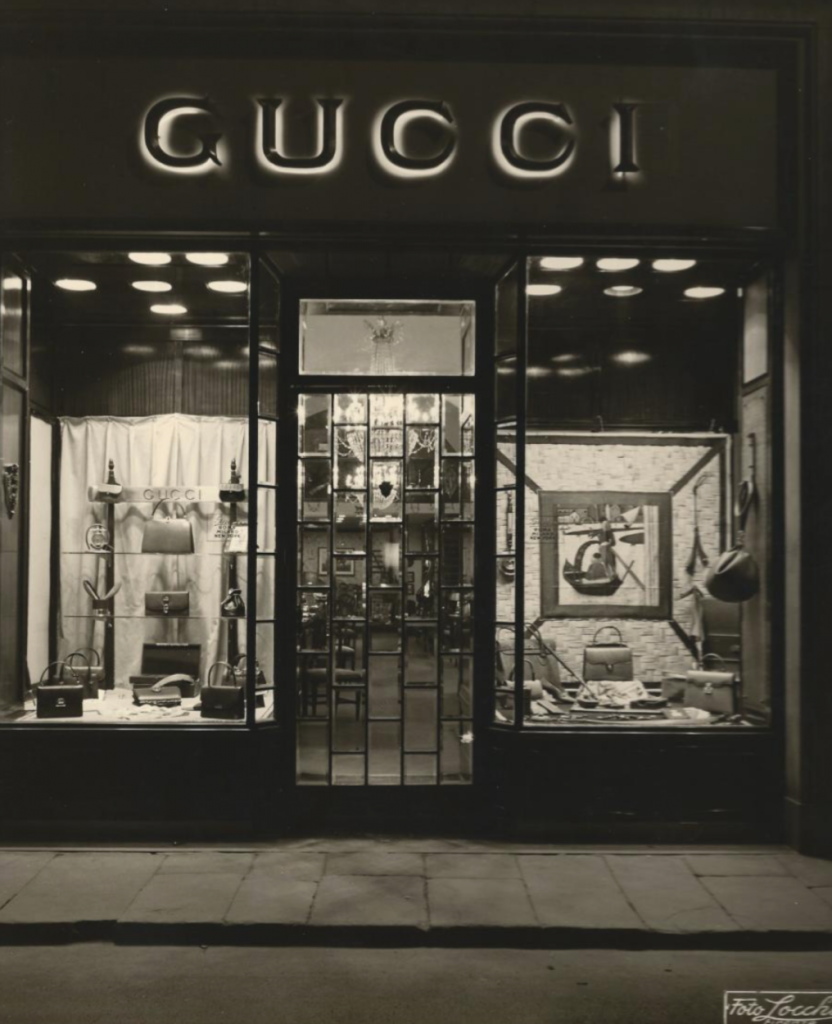 Being raised with passion and culture so present in your daily life, in all of your travels, what place have you traveled to that has inspired the most passion in you personally?

My trip to India was so inspirational, but also a trip I made on my own to the Jordanian desert.  Being far away from the world as we know it will always give us a new perspective on life.

Being the only daughter, what was it like being in a room with both your grandfather, Guccio, and your father?

Regrettably I never met my grandfather, who died in 1953 – ten years before I was born.  I would have loved to be in room with the two of them, just to sit there in silence and observe.

If you could summarize your father in one sentence, what would it be?

There is so much we can all learn from legacies that started new waves of living and the Gucci family did precisely that. Knowing there is a woman out there who has the tenacity, will, passion, and intellect to so gallantly tell a story with poise and grace? It’s something I’m thrilled to share with all of you. Patricia’s book is not only one to inspire you to dream, but to instill your belief in the kind of love we all strive towards, the willingness to continually adapt and evolve in business in spite of faltering economies or an ever-changing world of struggling to break through the glass ceiling. It drives home the truth that a nurturing nature is critical to collective thriving.

Thank you Patricia Gucci for your willingness to share a story so beautiful, honest, and open about your family, your life, and everything in between. 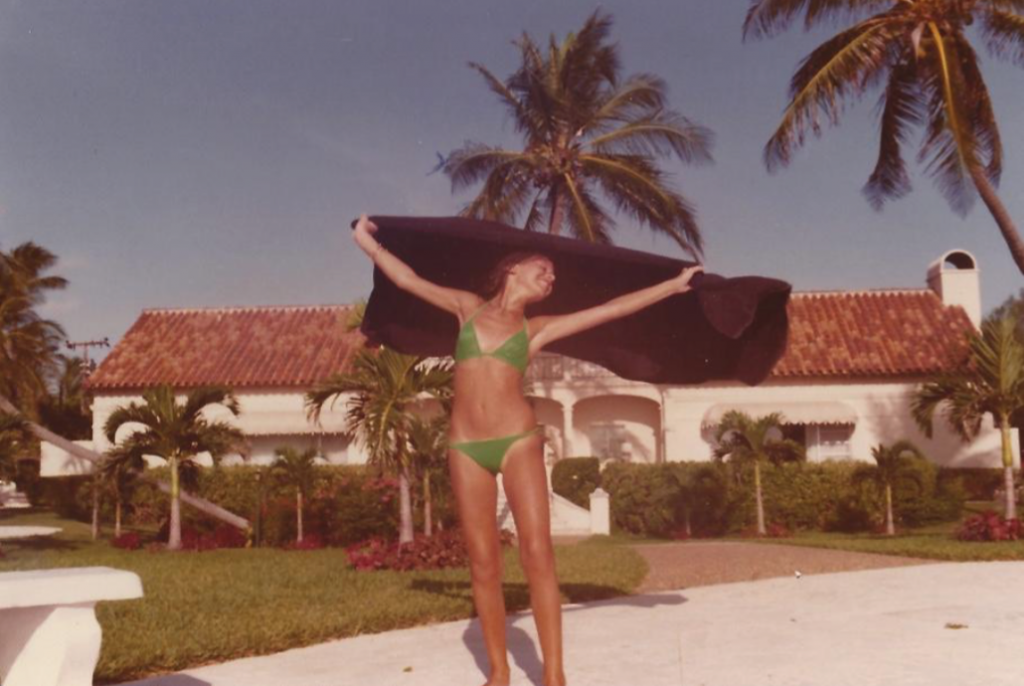 Patricia Gucci was born in London and is the only daughter of Bruna and Aldo Gucci.

She was educated in England, Italy and Switzerland before moving to New York to study acting, despite her father’s wish that she dedicate herself to the family business. In 1982 after a year of study her father’s wish prevailed and she was appointed to the board of Gucci and roving Ambassador in the US and Asia until the sale to Investcorp in 1987.

Aldo Gucci was born in 1905 to Aida and Guccio Gucci – the company’s founder. Patricia’s father was the visionary responsible for developing Gucci beyond its Florentine roots and turning the company into a global luxury brand, opening its first store in Rome and then launching in New York in the 1950s. His pioneering spirit led to a string of stores across the US and beyond, establishing Gucci and the Made in Italy brand like no other before him.

Patricia is establishing a legacy of her own, developing biographical projects based on a collection of diverse experiences and a unique perspective.

She has three daughters – Alexandra, Victoria and Isabella. She lives in Switzerland.

A Tribute to a Memorable Father on Father’s Day

In the Name of Gucci: A Memoir, by Patricia Gucci (Crown; May 10, 2016) is a daughter’s bittersweet tribute to her beloved father which traces Aldo Gucci’s marketing brilliance and stamina in establishing Gucci as one of the world’s most iconic brands.  It is the first book written by a direct descendant of Guccio Gucci—Patricia’s grandfather and the company’s founder. 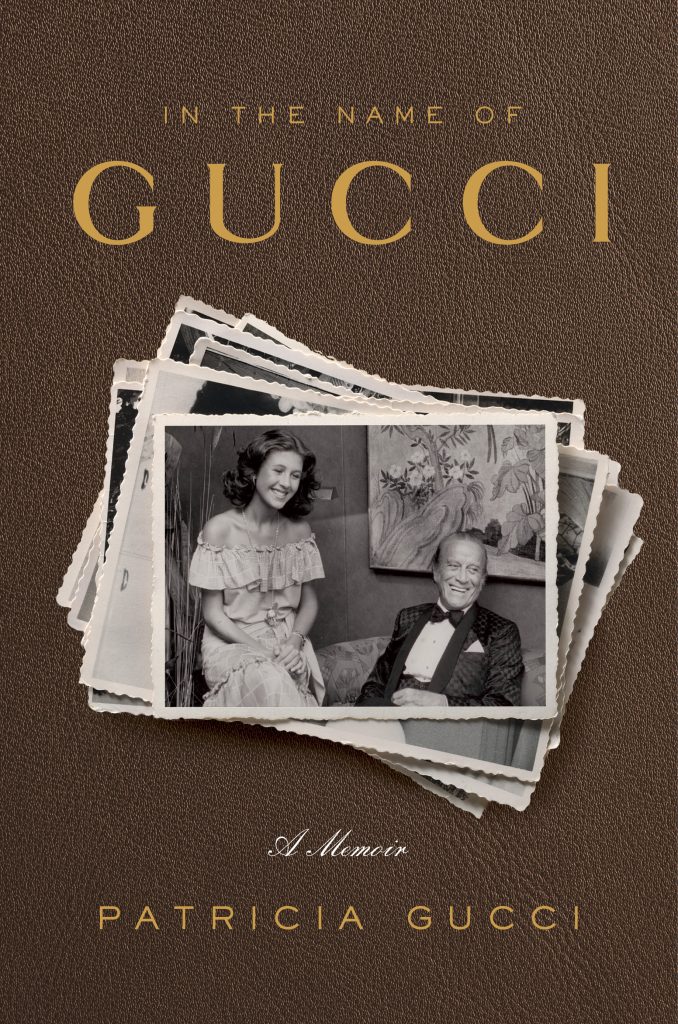 In the Name of Gucci chronicles Patricia Gucci’s life as the secret love child of Aldo Gucci and Bruna—the woman he fell in love with when she was just eighteen, and remained at his side until his death at 84 years of age. What started out as an affair became a lifelong commitment and for the last 20 years of his life, long after he had been estranged from his first wife Olwen, it was Bruna who was considered his wife in the US, culminating with their marriage in the 1980s. Woven throughout the book is the complicated, but loving father-daughter relationship between Aldo and Patricia Gucci, the first woman in the family to be elected to the Gucci board of directors, and who ultimately became his sole universal heir.

Aldo Gucci was the first Italian to set up an Italian luxury goods retail operation in the US, opening on Fifth Avenue in New York, Worth Avenue in Palm Beach and Rodeo Drive in Los Angeles, paving the way for the ‘Made in Italy’ phenomenon throughout the world for countless others to follow in his footsteps.

In 2009, nearly 50 years after her mother and father’s love affair began, Patricia asked about their decades-long relationship. While Bruna had in the past always shut down such inquiries, this time she left the room, returning with the many love letters Aldo had written her over the years. Two decades after Aldo’s death, Bruna had opened a window to her life with Patricia’s father—the first glimpse into what had been a mystery for so long. Bruna’s gift marked the start of Patricia’s quest to piece together the jigsaw of her parents’ lives and, ultimately, her own.

IN THE NAME OF GUCCI is a daughter’s bittersweet tribute to her beloved father – a larger-than-life figure whose memory stirs up joy and sorrow in equal measure. Joy for the positive energy he brought into Patricia’s life; sorrow for the way he was betrayed by those closest to him and having to watch his legacy being swept under the carpet.

The book reveals, for the first time, the soft sensitive underbelly of the patriarch who was peacemaker and always looked after the interests of his family while ruling his company with an iron fist.

Via never-before-seen letters, the book chronicles the enduring love between Patricia’s parents in an era when an extramarital relationship and having a child out of wedlock was punishable by imprisonment. For Bruna, it was the start of a clandestine affair and years of secrecy and concealment. The poignancy of Bruna’s isolation from the world is graphically depicted–first, living in England as a foreigner and, later, her sense of not belonging in Aldo’s world.

Aldo Gucci’s marketing brilliance and stamina in establishing Gucci as one of the world’s most iconic brands. He was the first Italian to set up a luxury goods retail operation in the U.S., opening on Fifth Avenue in New York, Worth Avenue in Palm Beach, and Rodeo Drive in Los Angeles, paving the way for the ‘Made in Italy’ phenomenon throughout the world for countless others to follow in his footsteps.

In a saga worthy of a Greek tragedy, the book chronicles Aldo’s fall from grace, detailing from a deeply personal perspective the disintegration of his dynasty. The glue that held everyone together, when Aldo was convicted of tax evasion everything fell apart, and it heralded the end of Gucci as a family business. Being alone in prison allowed him to reflect on his life and the importance of family, loyalty, and his love for Bruna and God. Bruna and Patricia were the only members of his family who ever visited him in prison (only one of his ten grandchildren came to pay his respects; his sons never made an appearance) and by the end of his life he knew they were only two people who would always stand by him.

After a lifetime of longing for a true father-daughter relationship, Patricia finally feels close to Aldo only to discover he is dying of cancer. Patricia and her mother stand vigil at Aldo’s deathbed, unable to imagine a world without him. Shortly after his death, Patricia learns that Aldo had made her his sole universal heir.