Shaky Knees Festival, ATLANTA: The Atlanta crowd gathered to celebrate music, rock n roll, and a reason to harken in summer with all the right beats. Day 2 welcomed us with a plethora of bands but it was my one-on-one with Barns Courtney and LANY that inspired some much appreciated love of music. The contrast of two musical artists newer on the scene, making their way into the hearts of music lovers, this Atlanta sit down was one we are all to happy to share. 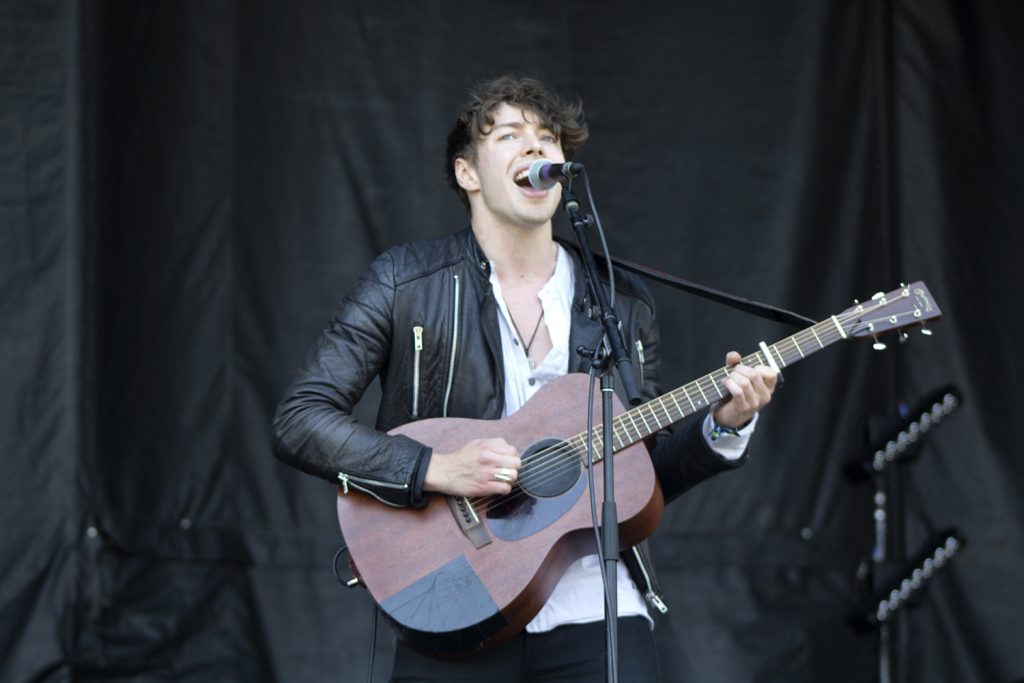 One of the lesser known acts of the festival but still with a powerful voice, Barns Courtney’s set started with a very humble audience turnout. But in good spirits, Courtney kindly made a joke about the turnout after performing his first song. A couple songs in, I went to a tent across from the stage to grab a bite to eat and as I sat with my loaded veggie tater tots in the grass, I could see the gradual incline of bystanders being pulled closer by Courtney’s voice. Courtney only played a thirty minute set, but you could hear the loud cheers after every song from a mile away and by the end of it, there were closer to 200 people cheering for his powerful vocals and, almost all, leaving immediately after his set. Courtney may not be well known now but he is one to keep an eye out for! I later got the chance to speak with Courtney about his upbringing what has impacted his sound and lyrics. Here’s what he had to say:

ATOD-Lexi: I read that you didn’t really know much about music other than the tunes your mom played until your friends introduced you to Nirvana.

BC: That was when I was really young. When I moved to Ipswich I was 14 so I started listening to actual music—my own volition!

ATOD-LS: What did your mom have you listen to?

ATOD-LS: What made you pursue music? Was that always a part of the plan or was it after you made more discoveries musically?

BC: I think like anybody, people just have certain things that are just in them. There are pictures of me when I was three years-old with one of those shitty spring microphones, I had all my teddy bears lined up singing to them. And I’m just hugely impractical and really bad at life.

ATOD-LS: Does your mother sing as well?

BC: She does, but not professionally. My grandfathers on both sides of my family were singers in big bands during the war.

ATOD-LS: What was that defining moment when you discovered your sound?

That’s an interesting question, because I wanted to make a record like a Jack White or Black Keys kind of deal and I recorded everything in my friend’s bedroom in this decommissioned old folks home that he lived in, because we didn’t have any money for anything. We wouldn’t have a drum kit so we’d have to make the percussion out of an old filing cabinet in the hallway. Or there was no bass so we’d have to use the piano in the rec room—the low notes. We just kind of stumbled across this sound through necessity.

ATOD-LS: What was the first lyric that you wrote that you felt proud of?

To be honest I’m always worried about my work. I tend to write when I have something to say or when I need to get something out, so I never really think too much about it. Then when it’s there and I look at it I’m like, well, hopefully that will be good for the general public.

ATOD-LS: What makes your music genuine?

For me I only write about things that I’m going through, I try to be as honest as possible. I never write music for the sake of it or to try to achieve any particular goal. I went to this guy’s house the other day called Youth and as soon as I went in through the front door, it was thick with marijuana smoke and he handed me this huge blunt and was like, smoke dope! I sat on the floor and he had this shitty old harmonium and he’s completely ignoring me, hanging out with his friend and I’m just hashing out some song! There was something really life affirming and beautiful about it. It was a really nice moment and, in the end, it all ended up getting worked into the song and I guess in a roundabout way that’s how I like to do it.

ATOD-LS: Create your own Wikipedia description in ten seconds.

Barns Courtney is an absolutely delightful young man who does not have any problems in the bedroom and you want to make love to him immediately because you’ll regret it, and, everything your mom said about creepy men isn’t true. 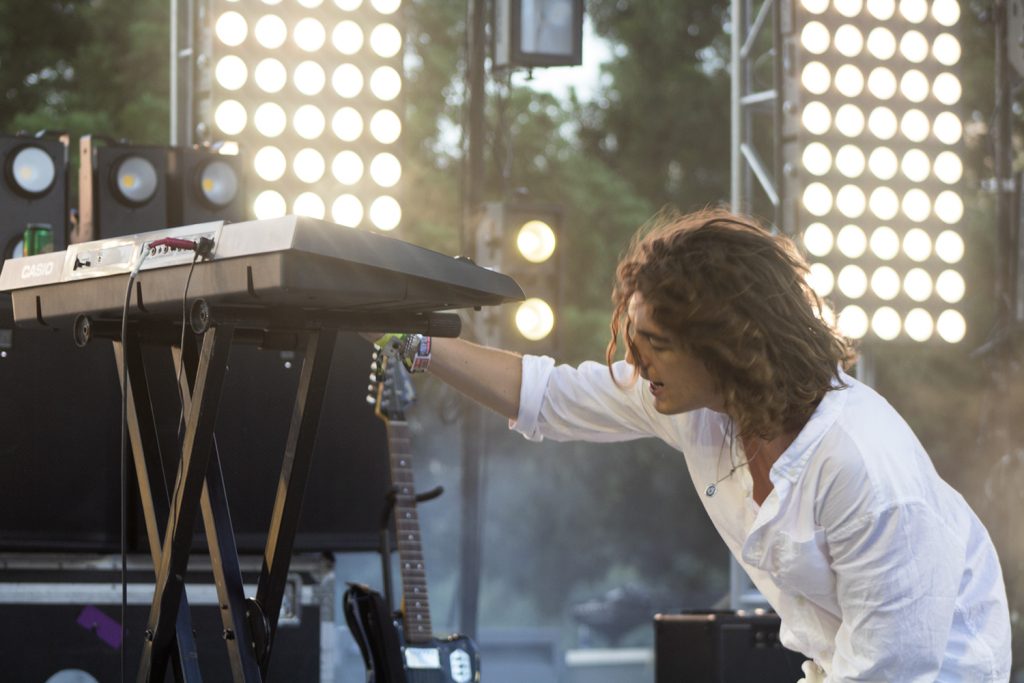 “They’re songs that make you feel like you deserve to be loved.”—LANY fan

Whether you’re looking for a song about romantic, platonic or unrequited love, LANY’s got you covered. They are some of the sweetest guys I’ve ever met. I spoke to them about following their instincts when writing alternative songs infused with R&B beats and I asked them about their process when writing some of their more vulnerable and honest lyrics. We sat down to talk just before their show:

ATOD – Lexi: I read in an interview that you are more inspired by movies when it comes to your music. What about movies inspires you and what is the process of breaking down that visual and turning that into lyrics?

Sometimes. I’m really moved by colors and cinematography; the way things are shot. Honestly sometimes at night before I’d fall asleep I used to go through Tumblr. There’s been times where I’d go back and reference the way an image makes me feel and almost even paint a picture around it.

ATOD-LS: There are some heavy R&B beats in your first album. Was there a particular movie like, “House Party” that influenced it?

No, that’s just what we came up with because we had never played together and that’s what our instincts were. I used to mow yards in high school and all I would listen to was Brian McKnight and Charlie Wilson and even Mario and Ray J and it was hilarious. We love that stuff!

ATOD-LS: (to Paul) You started off with a solo career, but how have you guys influenced each other as a band?

We started as friends. I think there’s just a ton of trust. Jake is one of the best drummers in the world and whatever his instincts are we just trust. These guys have shown me trust when it comes to writing our lyrics. So we each carry our own weight.

ATOD-LS: (to Les) I read that you and Paul met Jake at the YMCA. I’m interested to know what you were doing at the YMCA?

We used to live in Nashville together. There was this YMCA in Greenhills. It was cheap and I was there with my friend Kyle Reaves and that’s where I met Jake. [Les over to the side]: Just a couple of guys lifting weights!

ATOD-LS: What makes you feel the most vulnerable when writing lyrics?

We’ve been working on some new songs and this was probably the first time I actually felt embarrassed to tell them a lot. They wound up loving it! I was writing this song and was like, “ok I’m so scared to redo this line”, and then we went with it. I think once we put it down, I’m just confident that it’s going to come across the way I want it to come across.

ATOD-LS: What was the first lyric that you wrote that you felt truly proud of, one that felt the most like you?

I was really, really proud of Walk Away, because that was the second song that we made. It was overall just a great way to talk about how I’m actually just not good at relationships. Then our third song we wrote was ILYSB and there were a lot of lines in there that I’m really proud of.

ATOD-LS: In the music industry, there’s this ongoing competition to be unique and to stand out. In  my opinion, the genuine quality of lyrics and music has somewhat deteriorated. What makes your music unique?

It’s just us following our instincts. We never set out to be unique, I don’t think. We have never said, let’s try to be so different. That has got to be so exhausting! What actually is different? Nothing is different. Yesterday I was just enjoying listening to The Fray and I’m like oh my god this is so tight! I just think us being us has attributed to our success as a band.

Day 2 consisted of a multitude of bands including:

The Decemberists is one of those bands that I can’t quite put my finger on what makes them great, but in a good way. There’s something sort of nostalgic about their music, and not that their evidently inspired by another decade, but in the way that their lyrics are written and are so simplistic. The crowd cheered for every song, lyric and guitar solo during their hour and a half long set; entranced by every word and cheering loudly to communicate their appreciation during every break in every song. One thing that I did appreciate about the audience is that they had every intention on actually experiencing the music instead of focusing on capturing every song on video or in pictures.

The only words I can think to use to describe Walk the Moon are energetic, colorful and eccentric, but their performance was so much more than that. Seeing Walk the Moon live is one of those things that you have to experience to get the full effect, in my opinion. They all seemed so excited and enthusiastic, it was almost like they were playing their first live show again. They’re dancing, energy and wide smiles throughout the set were incredibly infectious and put them on my list of bands to see live again!

PICNICS: Meant for sun kissed cheeks, bright and summery attire, and soaking up the warmth with refreshing spritzers and delicious cuisine, all the while doing so in wonderful company.