clothes that speak to us

alice + olivia by Stacey Bendet is proud to announce that the late Neo-expressionist artist and frequent Andy Warhol collaborator Jean-Michel Basquiat has been selected, through the Basquiat Estate, as the partner for the second capsule collection that will help support the Council of Fashion Designers of America’s efforts to promote young talent. The collection, shown as part of the alice + olivia Resort 2017 season, will land in stores and online in November 2016.

Basquiat is an artist that transformed the way street art was perceived. A man that spilled his soul onto the canvas or the wall, his pieces are undeniably poignant and demonstrative of everything good and true about contemporary art. His art redefined an entire generation. Having created with another iconic artist, Andy Warhol, Basquiat pushed the boundaries of how we perceive truth, society, and creativity. His work inspires us so when we heard alice + olivia had created a line utilizing his work? We fell madly in love …

alice + olivia by Stacey Bendet is proud to announce that the late Neo-expressionist artist and frequent Andy Warhol collaborator Jean-Michel Basquiat has been selected, through the Basquiat Estate, as the partner for the second capsule collection that will help support the Council of Fashion Designers of America’s efforts to promote young talent. The collection, shown as part of the alice + olivia Resort 2017 season, will land in stores and online in November 2016.

Jean-Michel Basquiat earned his recognition in the art world before the age of 27, even gaining the title of youngest artist to be given a solo show at the widely respected KestnerGesellschaft Gallery in Germany. His personal achievements and participation in an American art movement that ushered in a wave of young new artists make Basquiat the perfect next partner for the promotion of young artists within the fashion industry. 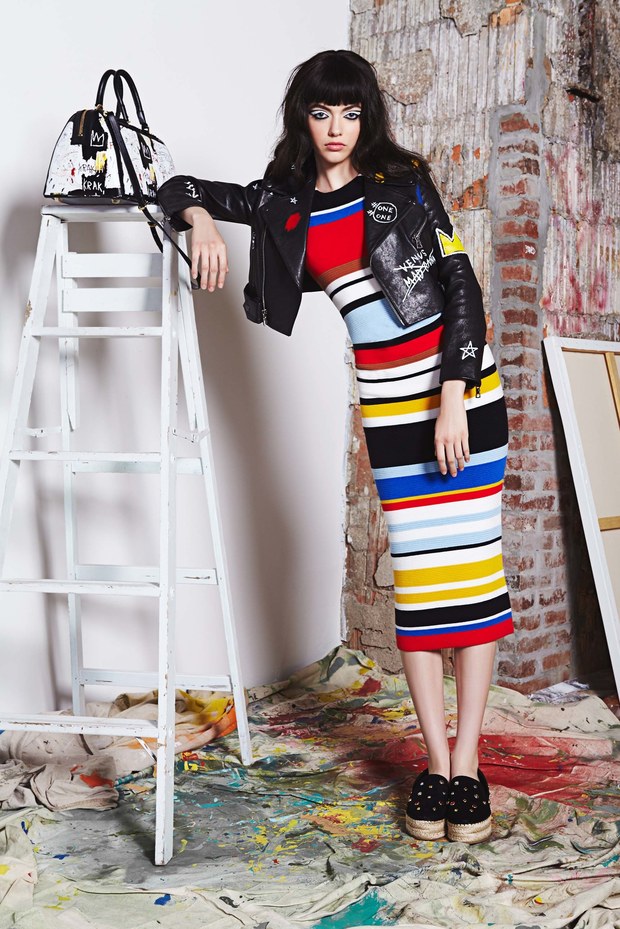 As part of the partnership with the CFDA, alice + olivia works with a new artist each year to create a capsule collection that will be available for purchase at all alice + olivia by Stacey Bendet stores, aliceandolivia.com, and other retail partners with 50% of the proceeds from select items donated to the CFDA.

“Jean-Michel Basquiat is one of my favorite artists. This partnership is exciting for me as it is very reflective of my brand and our continued collaboration with artists. It is also wonderful to be able to raise funds for the CFDA and support their ongoing initiatives within our industry that develop new talent.”

The new collection includes a variety of unique apparel pieces, accessories and gifts that feature iconic elements of Basquiat’s art, such as the golden crown and colorful, street-art inspired design, mixed with alice + olivia’s whimsical and feminine touch. “Beat Bop” 1983, “Replicas” 1983, “Ascent” 1983, “In Italian” 1983, “Panel of Experts” 1982 and “Notary” 1983 are some of the artist’s famed works that Bendet cites as inspiration for the capsule collection. Elements of these iconic works can be seen throughout the collection of apparel, accessories, and gifts. Bendet delivers a modern interpretation of Basquiat’s iconic artworks with the incorporation of beadwork and embroidery details which add a dimensional element to the iconic Basquiat works as they come to life in the form of dresses, tops, skirts, jackets, handbags, shoes, eyewear and more. 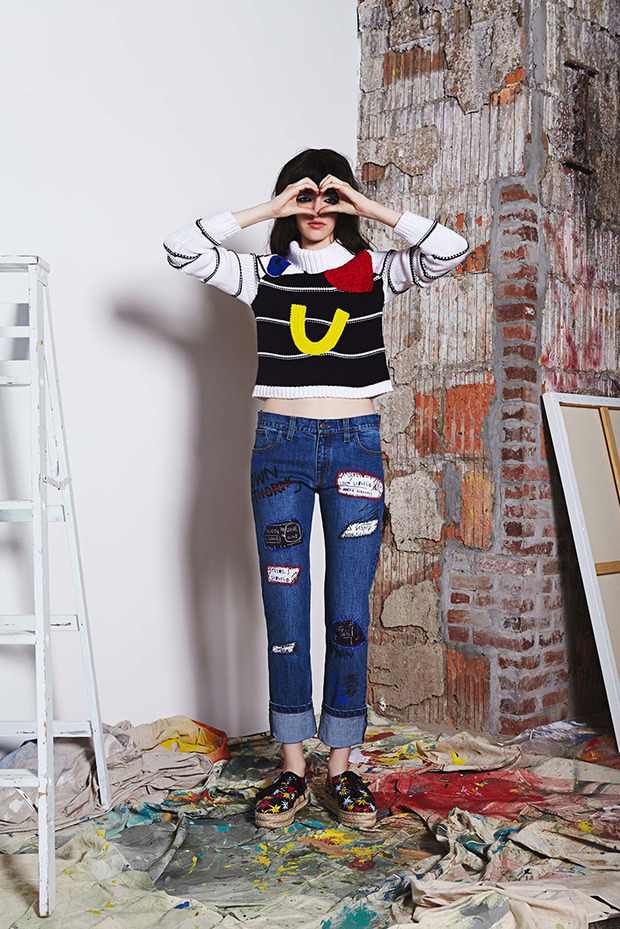 Steven Kolb, President and CEO of the CFDA, says:

“We could not be more appreciative of Stacey Bendet and her work to help us in our cause to advance up-and-coming fashion talent. Thanks to this initiative, the support we will be receiving from alice + olivia is of great value to our organization.” 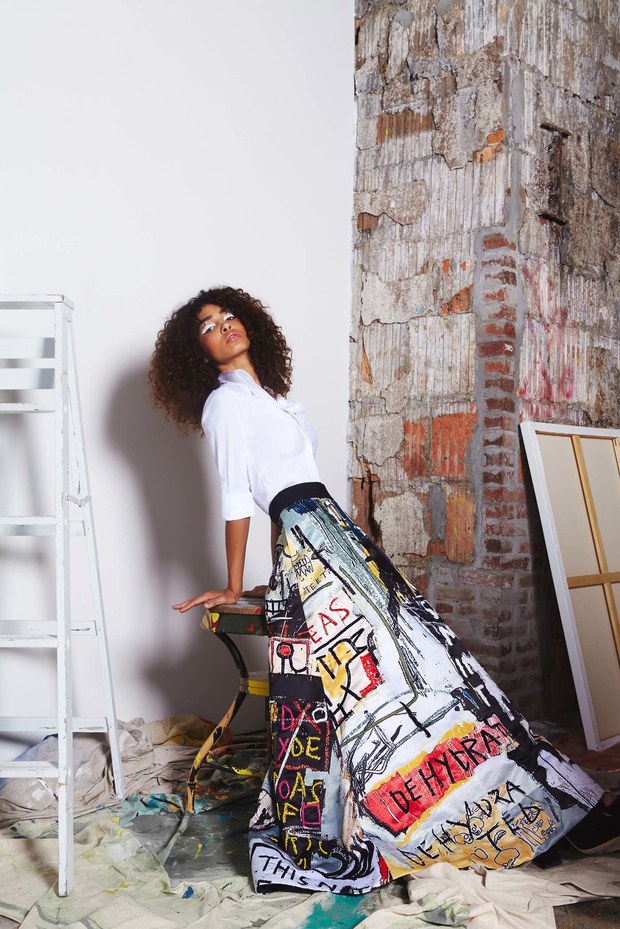 For the first CFDA capsule collection, debuted in April 2015, Bendet partnered with celebrated artist Domingo Zapata, a Spanish-American who has studios in New York, Miami, and Hollywood. Zapata’s pieces created for the partnership included a hand-painted ball gown, hand-painted full-length skirt, and custom two-piece skirt with a matching leather bustier featuring piping in a print painted by Zapata, all of which were auctioned off by Paddle8 with 100% of proceeds benefiting the CFDA.

Launched in 2002, alice + olivia by Stacey Bendet is a brand that allows customers to express their personal style. With collections that juxtapose the whimsical and flirty with the sexy and sophisticated, a+o epitomizes the personality and sensibility of its founder, Stacey Bendet. The brand was born from Stacey’s quest to create the perfect pair of pants, and has since grown into a full lifestyle collection including ready-to- wear, gowns, shoes, accessories and handbags. Pulling inspiration from the world around her, Stacey incorporates bold colors, unique prints, and eclectic details to create vibrant and dynamic pieces. The brand is a Hollywood favorite with celebrity fans including Beyoncé, Gwyneth Paltrow, Katy Perry, Sarah Jessica Parker, Michelle Obama and Taylor Swift. alice + olivia by Stacey Bendet is available at aliceandolivia.com, over 30 free-standing boutiques located in major cities around the world including, New York, Los Angeles, San Francisco, Tokyo, Hong Kong, Dubai, Singapore, as well as over 800 of the finest department and specialty stores worldwide. 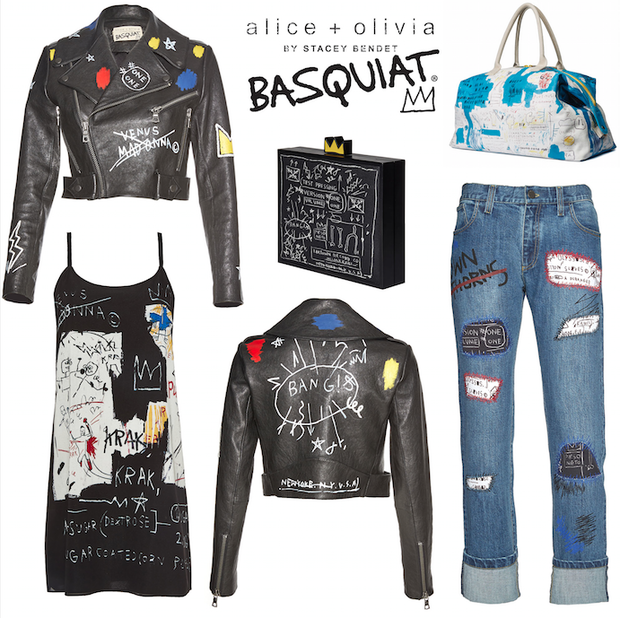 In 1978 Basquiat left home for good and quit school just one year before graduating form high school. He lived with friends and began selling hand painted postcards and T-shirts. In June of 1980, Basquiat’s art was publicly exhibited for the first time in a show sponsored by Colab (Collaborative Projects Incorporated) along with the work of Jenny Holzer, Lee Quinones, Kenny Scharf, Kiki Smith, Robin Winters, John Ahearn, Jane Dickson, Mike Glier, Mimi Gross, and David Hammons. Basquiat continued to exhibit his work around New York City and in Europe, participating in shows along with the likes of Keith Haring, Barbara Kruger.
In December of 1981, poet and artist Rene Ricard published the first major article on Basquiat entitled “The Radiant Child” in Artforum. In 1982, Basquiat was featured in the group show “Transavanguardia: Italia/America” along with Neo-Expressionists Sandro Chia, Francesco Clemente, Enzu Cucchi, David Deutsch, David Salle, and Julian Schnabel (who will go on to direct the biographical film Basquiat in 1996). In 1983 Basquiat had one-artist exhibitions at the galleries of Annina Nosei and Larry Gagosian and was also included in the “1983 Biennial Exhibition” at the Whitney Museum of American Art. It was also in 1983 that Basquiat was befriended by Andy Warhol, a relationship that sparked discussion concerning white patronization of black art, a conflict that remains, to this day, at the center of most discussions of Basquiat’s life and work. Basquiat and Warhol collaborated on a number of paintings, none of which are critically acclaimed. Their relationship continued, despite this, until Warhol’s death in 1987.
On February 10, 1985, Basquiat appeared on the cover of The New York Times Magazine, posing for the Cathleen McGuigan article “New Art, New Money: The Marketing of an American Artist.” In March, Basquiat had his second one-artist show at the Mary Boone Gallery. In the exhibition catalogue, Robert Farris Thompson spoke of Basquiat’s work in terms of an Afro-Atlantic tradition, a context in which this art had never been discussed.
In 1986, Basquiat travelled to Africa for the first time and his work was shown in Abidjan, Ivory Coast. In November, a large exhibition of more than sixty paintings and drawings opened at the Kestner- Gesellschaft in Hannover; at twenty-five Basquiat was the youngest artist ever given an exhibition there. In 1988, Basquiat had shows in both Paris and New York; some critics, an encouraging development, praised the New York show.
Primary source for biography: Sirmans, M. Franklin. “Chronology.” Jean-Michel Basquiat. Ed. Richard Marshall. New York: Whitney/Abrams, 1992. 233-250.

PinUp and the Search for Bicycling Betty…