Like any good tale of travel, its how you arrive that sets the tone for the entire experience. This is the beginning of a story that introduced me to a city I had never been to: Hamburg – and I got there by way of one of Europe’s greatest perks: the train.

Taking the train from Berlin to Hamburg, I was absolutely awed by the rich textures and colors of green that blanket this part of the country like the ocean bathes a shore in California. Through the window exist unknown strangers living their lives, buildings that have cracks and tales that could rip your heart or make you fall in love were you to know what happened years ago – when perhaps a war was upon them, or a storm came thrashing through or it’s where someone stole their first kiss when they were young and happily foolish. Bright yellow flowers blanket the landscape throughout as if the ground beneath it was rooted in sunshine. Peeking in through the endless rows of trees, this sea of marigold seeps in as if to say, life is different here. I’ve never encountered anything quite like that as we pass small German villages cascading along the countryside, keeping the train tracks company. It’s no wonder artists flock here like lost lamb. It’s endearing and makes you feel like you could swim in a pool of yellow inspiration. Buildings and farms with steeples, made of brick aged with every year that has passed leaving behind fragments of character and charm.

Arriving by train into the Hamburg Hauptbahnhof station, a place inhabited by nearly half million travelers each day, Hamburg is a city alive with the hustle and bustle of business men and women and those with places to be. Architecturally inspiring, from spires to stairwells that stir ones imagination, Hamburg is quite a place. Most everything is new in terms of the city itself due to a large fire in 1842 that destroyed all but one building. As a result the city was rebuilt in the eyes of the past and the design you see sprinkled throughout this city is one that emits deco, gothic design, modern design, and its own creative form of expression. That is most visible along Alster Lake where bridges lined with locks are met with industrial ports only contradicted by the gorgeous new Elbphilharmonie. A philharmonic that has revived the cultural landscape of a city known as the “City of Music and Water”. 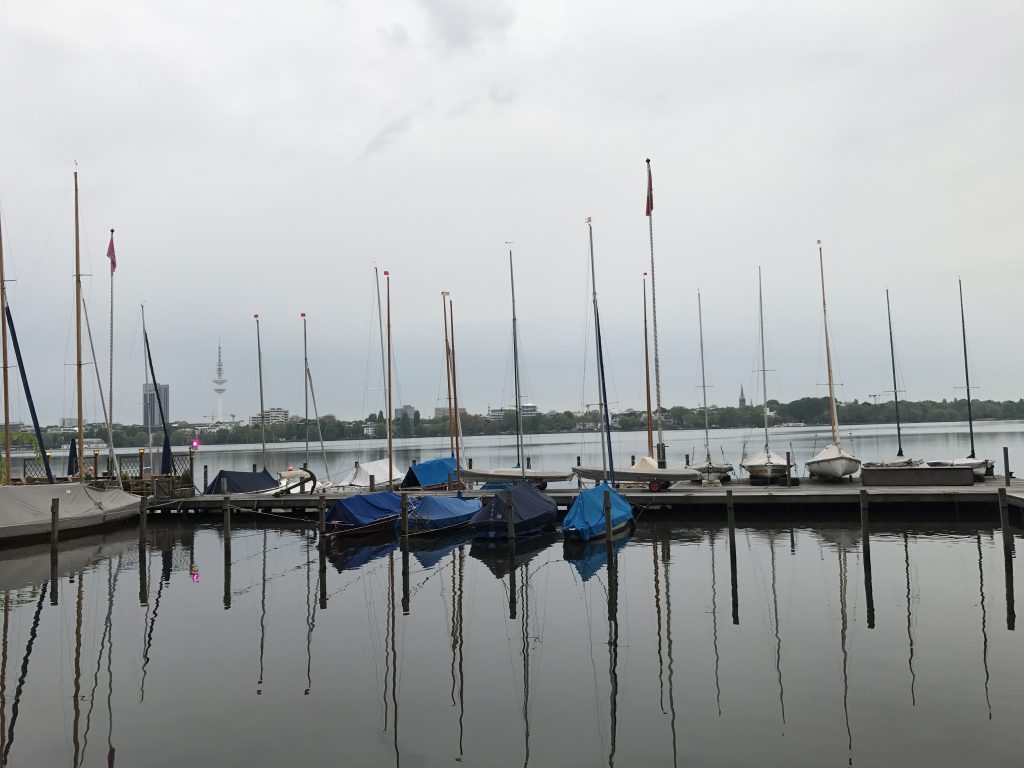 After checking in at Le Meridien, it came time to delve into the culture, art, music and culinary scene of the city and it was Mr. Tomas Kaiser that led us through the city with an encyclopedic knowledge of every building, the rich history, the artists commissioned to revive this city on the water, and so much more. Hamburg is also the port that serves as the primary port for Eastern Europe, also serving as the incoming harbor of China and Russia so imagine the things that have been through here over time (including coffees and teas from around the world)!

In the course of rebuilding, Hamburg was rebuilt solely with villas and no castles in an effort to make it a place everyone can work to be certain there was no shortage of jobs and to diminish the threat of economic instability. That said, the moment you settle in and see the thriving German city, you see a real beauty. So thanks to the know-how of Tomas, below are some of my favorite things to do in Hamburg.

This is a city that you can walk through in a day and stumble upon secret gardens, beautiful brick laiden warehouses, intricate entryways that are either flats or businesses, quaint cafes lining the water, terrain that spans the riveting Außenalster (the Alster Lakes), architecture that looks like something out of literary prose, and rather friendly people. With nearly one hundred parks and gardens, Hamburg also is the quintessential stop to picnic, enjoy a coffee or simply take a moment to appreciate nature.

Things to explore: St. Nicholas – a gothic designed church, Burg Kaffee – a hand pressed coffee brewer that makes delicious coffee,  Schanzenviertel – a revived pop-culture district, Planten un Blomen – the green soul of Hamburg starts on the Inner Alster lake and winds its way along the Colonnaden shopping street with whitewashed arcades and a multitude of street cafes. There is The Fontenay – a brand new hotel whose architecture (designed by architect, Jan Schtomer) is modern and sustainable with a futuristic feel and is said to be one of the more ambitious hotel projects in all of Hamburg (set to open sometime in 2017). For those who love a good outdoor workout, the running trail that goes along the perimeter of Lake Alster is phenomenal and you should also explore the buildings and art within the city, appreciate the mass amounts of bridges adorned with locks of love and messages of hope, the mosaics around the port, a gorgeous hotel & restaurant design (“East Hotel & Restaurant”) by Spanish architecture firm Miralles Tagliabue, and of course the brand new Elbphilharmonie.

The Elbphilharmonie is the astounding new philharmonic building designed with so much thoughtfulness, every detail has a purpose. The outer facade moves much like the river itself. When the sun hits it just right it seems blue and fluid as if it’s in a state of continual movement which feels like musical notes drifting through the air. Located on the tip of the HafenCity, architects Pierre de Meuron, Jacques Herzog and Ascan Mergenthaler designed something of a marvel. Atop the Kaiserspeicher designed by Hamburg architect Werner Kallmorgen was commissioned with the design. Like its predecessor, the new Kaispeicher is geared to storing goods such as cocoa, tobacco and tea. The contrast of modern and historic is what makes this such a unique stop. When you enter in to the philharmonic itself, you take an escalator designed to be the longest rounded escalator in the world and it’s quite an experience! It’s almost like being in a portal taking you to another time and space.

The Grand Hall is exquisite with acoustics built in that allow every single guest in any given seat to experience sound precisely the same. There is also an organ that spans the entire space making it more of an art fixture than a mere instrument. I had the pleasure of attending a concert in the Recital Hall, no less impressive than the Grand Hall, with wooden textured walls designed with the same acoustic ingenuity as the rest of the philharmonic. Seeing Boris Giltburg for the first time, the young pianist and prodigy whose musicality and physicality take you on such an extraordinary emotional journey, it’s truly moving and unforgettable. With views of the city from every angle, this building is something to revel in.

One of my other “exploration” favorites was sailing with Captain Martin from Käpt’n Prüsse, a sailing school and tour company located on auf der Alster. Having been a virgin sailor, Martin walked me through every step and me and my sail-mate Johanna took turns manning the helm, being jibe masters, learning the difference between wayward and leeward, and we even broke down the mainsail mast. Being out on the water while the rain drizzled above was more fun that I’ve had in a long while. It was peaceful and requires patience and a tremendous amount of skill. Certainly made me appreciate regatta teams that brave the waters on the regular. Dressed top to bottom in water appropriate gear, it’s official that I have a newfound love for sailing and cannot wait to do it again – and again!

Little known facts: There is only 1 street left with merchant houses, polo and rowing are big here, they plan on spending €12billion over 25 years to bring in new urbanism, 7,000 apartments, new universities; the size of the harbor is the same size as Copenhagen.

Travel Tip: Book your tickets to Elbphilharmonie and THEN plan your trip. With sellout performances months in advance, it’s well worth putting the effort into long term planning.

Please note that while at the present, the G20 has caused a rather different view of the city of Hamburg, it is an exquisite place to see, a wonderful place to dine, and a terrific place to work.

Next up … EATING in Hamburg | Part 2, COME HUNGRY!

Heading to Hamburg from Dawn Garcia on Vimeo.

Week 1- Lifestyle Change A Mission To…