After a two and half year renovation, Los Angeles has its beloved Ford Theatres back! Nearing its hundredth anniversary, today I was invited to tour the gorgeous John Anson Ford Theatres and what I found was a cultural mecca with all of the architectural nuances and breathtaking infrastructure that sets it apart. Deemed a California landmark, the Ford Theatre is more than a place to nestle in and feast your ears and eyes. In fact, it is more important to our city landscape than you’d imagine. The morning begins with a live performance by Las Colibri.

LA has a reinvigorated cultural gem! from Dawn Garcia on Vimeo.

Like any massive architectural and structural undertaking, to create the final product unveiled this morning in the heart of the Hollywood Hills, it took a village. A village of innovators, politicians, designers, architects, artists, landscapers, city officials, benefactors, fundraisers and a rather lofty vision. That said, as the California sunshine shone down on those of us invited to tour the theatre today, a well of pride came mounting to the surface. Unlike any other LA theatre, this theatre has a story whose tale epitomizes the cultural diversity of the city itself.

“Where there is no vision, the people will perish.”

A sentiment echoed on the newly built stage this morning by LA County Supervisor, Sheila Kuehl as she introduced us all to the newly redesigned theatre. In the company of Architect Brenda Levin, Interim Executirve Director of the Ford Theatres Olga Garay-English, Chair of the Board David A. Ford, Former LA County Supervisor Zev Yaroslavsky, President and COO of Pankow Dave Eichten, Parks & Recreation Director John Wicker and CEO of LA County, Sachi Hamai, we learned the intricacies of just how this renovation began and completed. The stories each respected person shared were ones of triumph, challenges, pride, humility, frustration, passion and most importantly, a unified vision. Much like any building framed by time and nature, nearly a hundred years had done quite a bit of damage to the building, its foundation and its overall functionality. In danger of being completely torn down, the city and its valiant supporters came together to draw out a plan for a revival that wouldn’t dare compromise the integrity of the history but implement the sustainability and design essential for its longevity. That’s what today was all about. Honoring the many people it took to rebuild and repurpose and being mindful that this theatre really is a place where creativity comes to life. 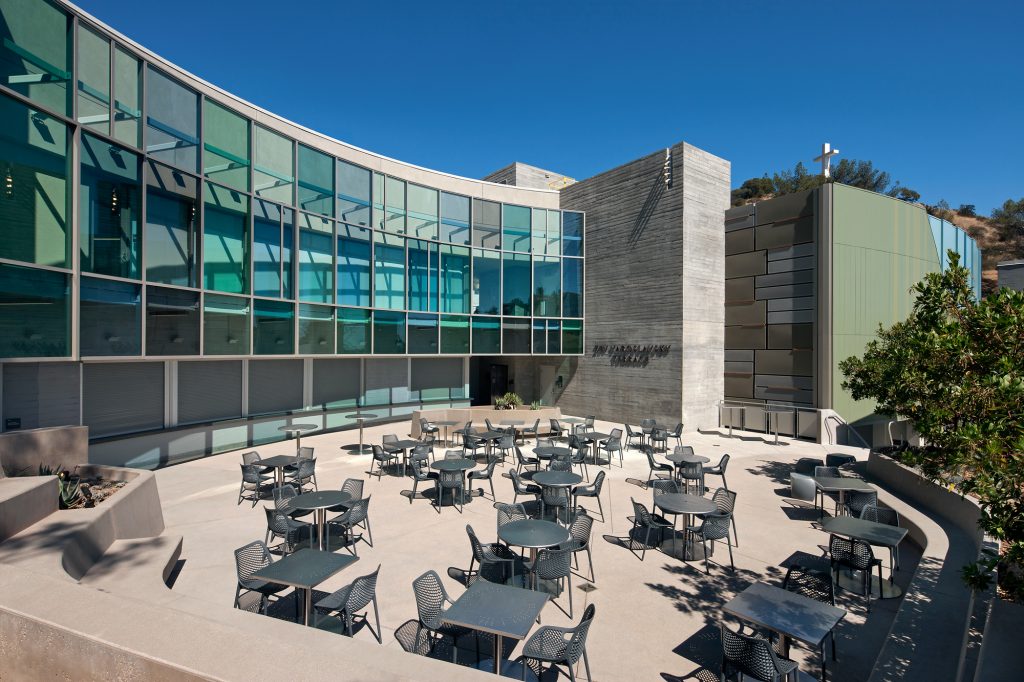 In true form of Los Angeles and the diverse population of culture that makes up the heart of the city, every element was carefully thought out with one exceptional difference: Brenda Levin and her team, along with everyone at the Ford Theatres, thought about making the experience just as divine for the performers as it is for the viewers themselves. Beginning with some of the most perfectly engineered sound, lighting and production elements, the stage sets the tone for a thoughtful approach and an environmentally conscious solution. Ika Brazilian wood lines the center stage and the scent of the wood mystifies you into a state of tranquility. That transcends when you begin to look around and see the structures all around the stage. A blend of concrete, plaster, wood, soundboards, LED lighting, succulents growing along the three-tiered retainer walls leading up the hillside, creating a depth effect that allows the stage to seem larger than life. Directly across the stage is the production booth and sound wall. The sound wall crafted out of steel beams and brilliant technology silences the hum of the 101 and the continual city buzz and spans the perimeter of the theatre itself. While all of this is immensely impressive, it’s what happens in the lower levels of the stage that blew my mind. Conscious of space needed for artists to move freely around, the design below leads you into a fully air conditioned space with a green room, a massive dressing room, vending machines, wide hallways and a community area. In other words, the days of artists cramming into small spaces with few luxuries are over. It must also be said that the artists’ entry from the stage is a work of art itself. Much like a concrete bunker with old school design appeal, the original design mimicking a cross between Decco and modernism is visually encapsulating. This was proven today as Viver Brasil took the stage and lured us into a state of utter bliss as they danced and musically wowed us into joyful submission. 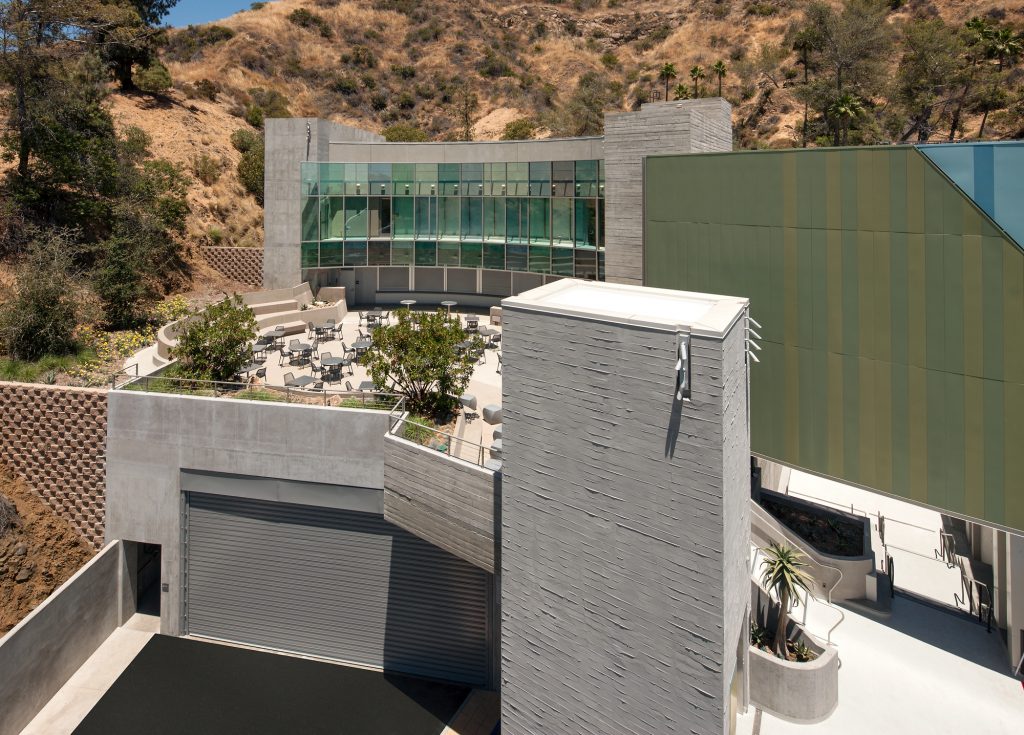 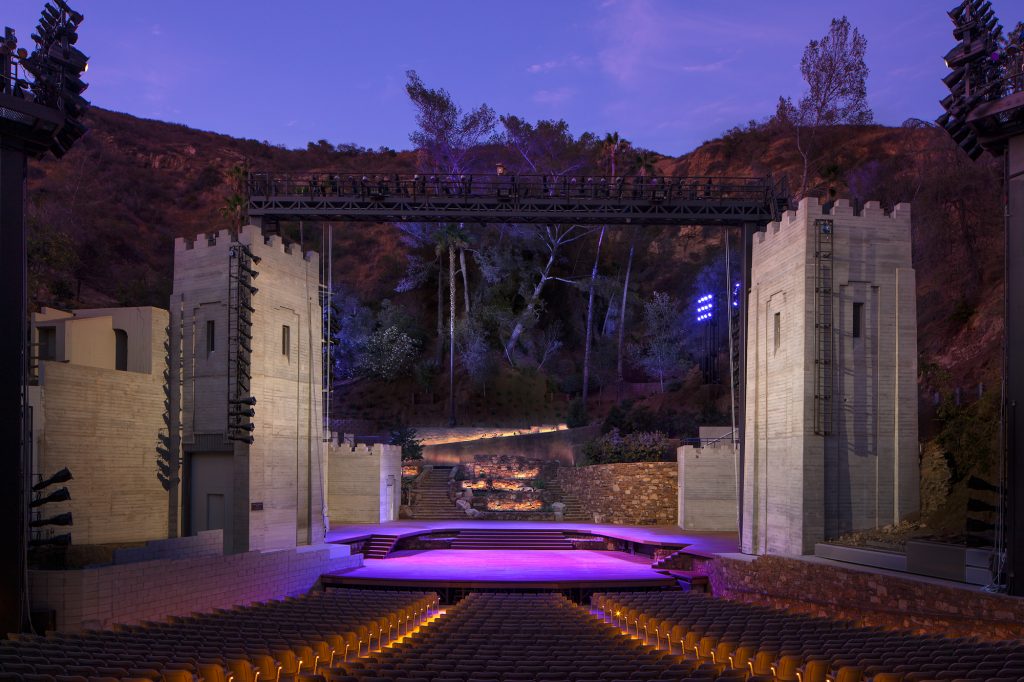 With a brand new space and an awakening ideal, “IGNITE @theFord” is a concept that epitomizes the culmination of inspiration, the centrifuge of beautiful diversity, and a wealth of unity. A vision of the truly forward thinking Christine Wetherill Stevenson who began this theatre at its inception in 1920 (originally called The Pilgrimmage to unite all of the world’s religion in one accepting locale), little subtleties like the cross-bearing arch on stage right pay homage to the renderings of a time when the theatre began. In staying true to the precipice of bringing the world together – on the stage, the new infrastructure, including the production offices and “The Zed” culinary center is built in line with the natural formation of the neighboring hillsides. In truth, the John Anson Ford Theatres, now officially re-opened as of tomorrow, will be the 1200-seat home for Angelenos and cultural savants alike.

A special thanks to Brenda Levin, LA County Supervisors Zev Yaroslavsky and Sheila Kuehl, David A. Ford, Olga Garay-English, Adam Davis, Jennifer Price-Letscher and all of the LA city officials for having the foresight to know and understand the importance of the John Anson Ford Theatres. Our city is one rich with culture but it was starving for a cultural epicenter where we were free to embrace the true essence of the city itself. Personally, as a native Angeleno, you’re my new heroes.

To buy tickets to their Opening Gala tomorrow evening or buy tickets and see what this brand new season has in store, visit: