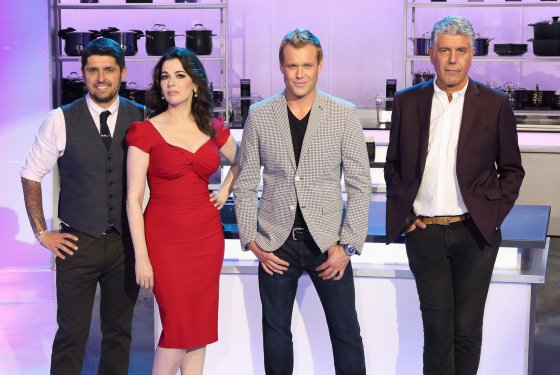 A Taste of Dawn RADIO Talks with 3 Chefs from ABC’s “The TASTE”:

Today in the studio we have three amazing chefs, Andres Dangond, Renee Everett, and Cynthia Presser who were all participants on ABC’s new culinary competition show “The TASTE”. On the show, sixteen competitors from pro chefs to home cooks whip up dishes attempting to impress four of the world’s most notable chefs. Each dish is judged in a blind taste test.

The judges: Chef Anthony Bourdain, Nigella Lawson, Ludo Lefebvre, Brian Malarkey. Each Judge will coach a team of four competing pro and amateur cooks chosen from a nationwide casting call as they vie to create the best tasting dish. In each episode, the groups face team and individual challenges with a variety of culinary themes through several elimination rounds. At the end of each episode, the mentors will have to judge the competitors’ dishes blind, with no knowledge of whose creation they’re sampling, what they’re eating, how it was prepared or whom they could be eliminating.

On the show, I talk to participants Andrés Dangond, Renee Everett, and Cynthia Presser. Each have their own unique style of cooking and it was so much fun hearing their stories of getting on the show and the things that have taken place as a result of it. Thank you to Chefs Dangond, Everett, and Presser for taking the time to be on the show and – making all of us hungry!! It was an absolute pleasure. 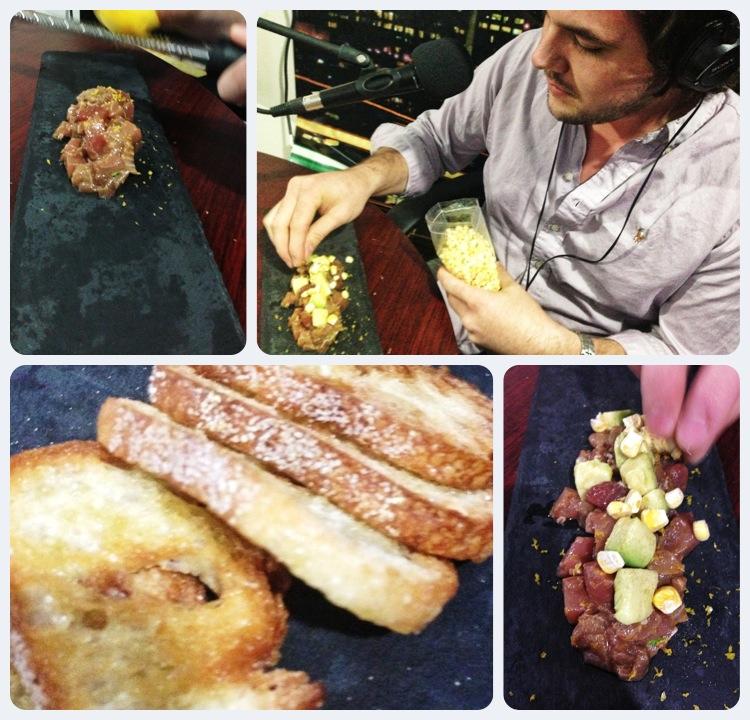 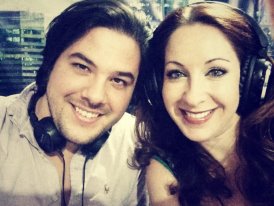 While talking with all 3 Chefs, in the studio Andrés came prepared with the dish he plated on The TASTE: Tuna Tartare with a balsamic/wasabi/sesame oil vinaigrette, freeze-dried corn, cilantro and smoked salt with a Meyer lemon zest. Bursting with flavor, I can see how he made it and personally, I think it was a mistake he didn’t make it further.

Out of 16,000 eager cooks and chefs only 60 made the final cut. Among them were the 3 Chefs on today’s show. Each with their own unique story, experience, and passions, the love for they do is apparent in every way. You can find Renee Everett at her new position working alongside Chef Ludo Lefebvre at his brand new restaurant in Los Angeles, Tois Mec. After regretting letting her leave too soon on the Show, he said he would offer her a job and turns out, he really did! Cynthia Presser is currently working on a Cookbook “Cooking with a Brazilian Twist”, and my friend and Chef, Andrés Dangond can be found preparing gourmet meals across Southern California and creating innovative concepts for his own restaurants. I am pleased to announce I will be doing an in-depth interview for ATOD Magazine with Chef Renee Everett so keep an eye out! Her story is truly amazing!! 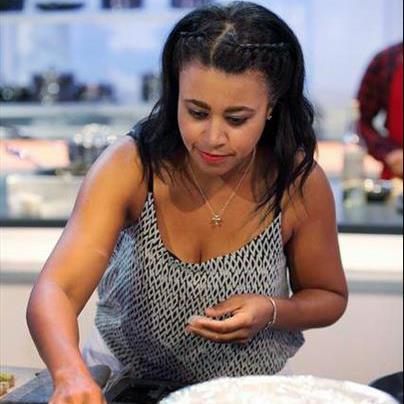 Cooking since the age of three, Renée made her first creation after pulling a chair over to the stove and figuring out how to turn it on. At the age of 14, while visiting her grandmother in New Orleans, she got a job at her cousin’s restaurant serving as a hostess. After a long career in government and governmental public relations, Renée enrolled in culinary school and graduated top in her class. She worked her way up from the prep kitchen to line cook to executive chef in a five year span, learning every aspect of the business. Renée has worked side by side with the Executive Chef of the Gibson’s Restaurant Group, working in both Gibson’s and Hugo’s kitchens; was on the opening staff of LuxBar; worked the line at Quartino’s and was a sous chef at Ditka’s in Oakbrook Terrace.

After living and studying in France for four months, Renée accepted a position as Executive Chef of Park 52 in Hyde Park. Renée was featured on local news and served as C-CAP judge and mentor to local National Restaurant Association Educational Foundation Pro-Start teams.

She can also butcher a pig in less than 20 minutes … using only a knife. (She will be in ATOD Magazine for an exclusive in-depth interview in the next month!) 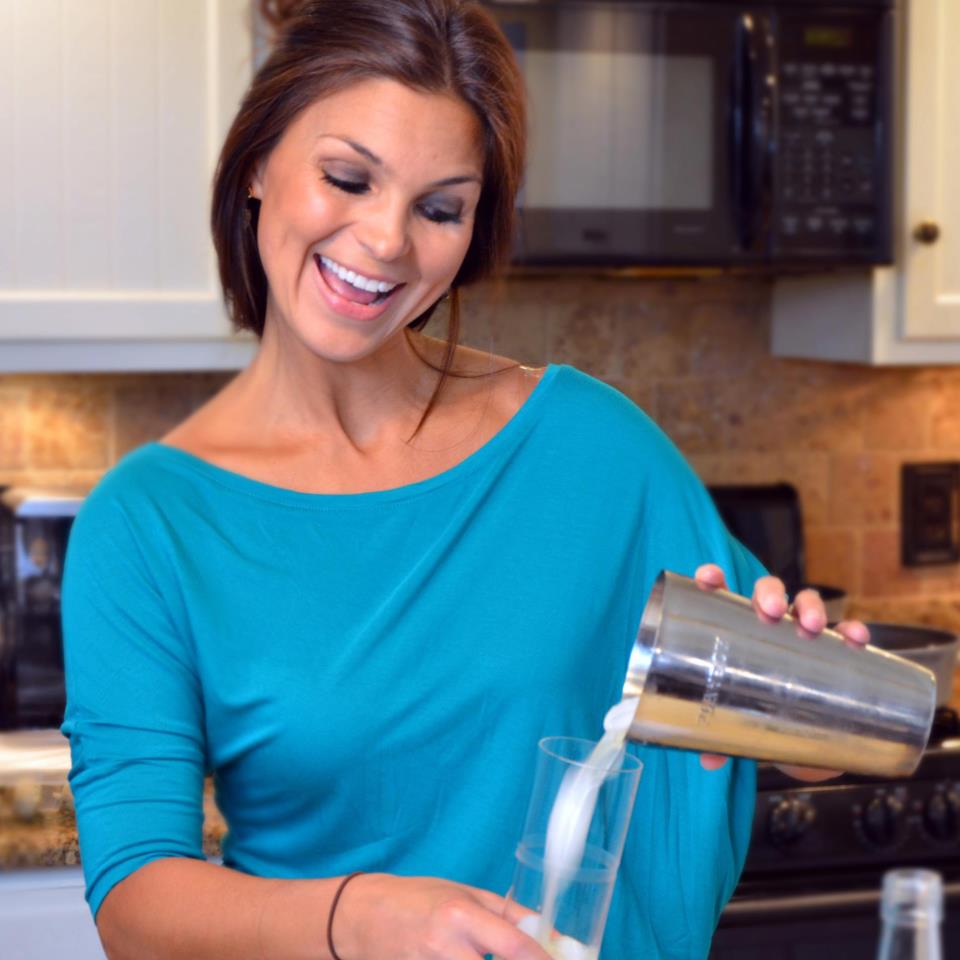 Cynthia Presser (originally Ana Cynthia Ferreira) grew up in the vibrant, tropical surroundings of Brazil where she started cooking at 16. She moved to San Diego, CA when she was 24 with a suitcase of belongings and her recipe journal.  She moved to Fort Wayne, Indiana in 2009 to raise her family. Shortly thereafter, she created a cultural event in Fort Wayne called A Taste of Brazil, and started her cooking website, www.cynthiapresser.com. Her website quickly grew to over 10,000 visitors per month, giving her the opportunity to share her culture through Brazilian recipes and other world-inspired dishes. 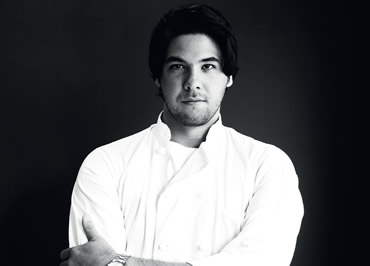 Working in the restaurant industry since he was 14 years old, Chef Andres Dangond, who is also founder of YB&R (Yellow, Blue & Red), a pop-up restaurant with rich history and a cuisine founded by Colombia’s natives, graduated as an ‘Honorary Student’ from Le Cordon Bleu.  Over the years, Andrés has learned from some of the best chefs in the world, training in Colombia, Spain and the US. He remembers his apprenticeship under Grant Achatz at ‘Alinea‘ and Laurent Gras at ‘L20‘ as two of the most influential and inspirational experiences for him in his career and life.

January Review This past month kicked off…