No Room For the Ordinary 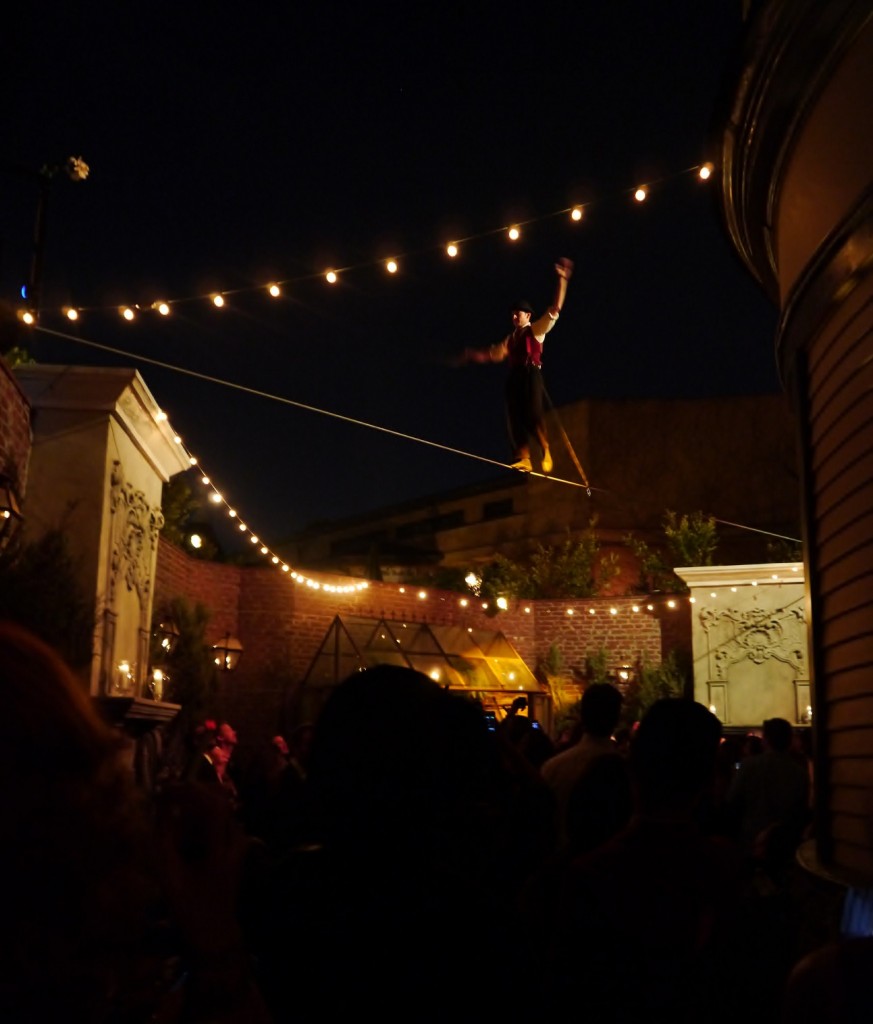 The sun is starting to descend on the summer solstice as I shuffle along Hollywood Boulevard, passing shops selling souvenir t-shirts (I bought a few). I brush across the faded star of Duke Ellington that compels me to sing “It Don’t Mean A Thing” under my breath. Kei, my guest and photographer for the night, is stopping to take pictures of the shingled walls and antiquated charm of the historic Hotel Juniper, the new refurnished home where No Vacancy—the recent brainchild of Mark and Johnnie Houston of Pour Vous and La Descarga fame—is located. The building is surrounded by the rapid expansion of newer Los Angeles, squeezed between bland homes and apartment buildings, yet an excited crowd is forming beneath the smoky sign advertising Hotel Juniper that looks rustic and rich with history. Perched under the faded sign is an illuminated neon “NO VACANCY” that challenges patrons to enter rather than turn away—and I suddenly feel that inside these walls I can satisfy my craving for Hemingway adventurism that I’m trying to best convey with a messenger bag slung over my shoulder that’s only carrying a lone Snickers bar.

A clean-cut man in a suit jacket and jeans approaches and leads us into the main entrance. We ascend a hardwood staircase draped in plush, red carpet that evokes images of Clark Gable and Greta Garbo strutting underneath the flashbulbs of eager paparazzi. And it only takes a few steps into No Vacancy to realize old Hollywood breathes within every crevice of this venue—Hotel Juniper itself dating back to 1902, once a homeschool for Charlie Chaplin’s children. There are old hotel rooms still preserved in their original condition, antique cash registers with punch-in keys and felt wallpaper still intact and pleasant to the touch. I immediately feel like I can swing down a staircase on a rope, swinging a large sword at my foes like Douglas Fairbanks—but I wouldn’t survive in prison.

I am escorted further onto the main floor; various hues of sepia and the smell of polished wood floors inhabit the room.  Velvety sounds of The Jazz Age engulf me in a comforting blanket of piano chords and clarinet. There is much to be seen on the main floor, and a careful eye to detail is rewarded greatly—glass display cases featuring vintage telephones and tea kettles, old photographs pre-dating World War I, and elegant, bejeweled chandeliers dangle from the ceiling. The furnished and lavish bar is bursting with a plethora of different spirits and intriguing cocktail menu designed exclusively for No Vacancy by “the dirty dozen”—not Charles Bronson or Ernest Borgnine, mind you, but rather some of the most respected and imaginative minds in the mixology/bartending industry from around the globe.

I walk up to the bar and order myself a China Doll, giving my best eyebrow raise of masculine intensity, and I receive a creamy, decadent cocktail garnished with a tiny pink flower. Admittedly, it does deal a small blow to my phony bravado—but the drink was delicious and the Houston Bros.’ strong attention to detail to their cocktail menu, among many other things, made every sip something of pure exhilaration.

Being this was the soft open to No Vacancy, there was a cavalcade of surprise guests and acts.  In one room I had my fortune told by Lady Aquamarine—the future is less bleak than I would expect—and after being told what my life had in store for me, I walk out onto the back patio feeling good and weave my way into the middle of an eclectic crowd forming outside around red, leather upholstery and outdoor fireplaces. The scent of cigar smoke and gin permeates in the air as I watch a man in a bowler derby and burgundy vest preparing to walk a tightrope strung above all our heads. Everyone in the crowd is dressed diversely, reflecting different periods of American fashion, some as flappers, others in pinstriped suits that look plucked from Bugsy Siegel’s wardrobe, and I try to avoid looking like a valet, in my sea foam tie and slacks that are pulled up a little too high. An ocean of heads and bodies of screenwriters, models, producers, Jeff Goldblums, and entrepreneurs are undulating in response to a gorgeous cover of Portishead’s “Glory Box” being performed by a live jazz band as moonlight hits.

As the band fades out, the man in the bowler derby starts to climb a ladder to where the tightrope begins. He stops to sweep out his arm over the audience, clutching a bouquet of flowers, and begins his trek across the tightrope above faces draped in cherry lipstick and blue eye shadow, everyone frantically trying to capture the moment with their camera phones, and me scribbling details in an orange notebook. The crowd and I reward the tightrope walker with a much deserved crackle of applause and it is after this moment that the co-owner of the bar, Mark Houston, arrives, blazing through the crowd in a grey suit and whirlwind of smiles, hugs, and handshakes from the many friends who have come to support him. And although I have never met him before, Mark sets aside time to speak with me, giving me a tour of the location and tells me of his vision for No Vacancy, explaining how he wants the bar to rise above the cheesiness of Hollywood Boulevard as well as restore a treasured landmark and era of Los Angeles history. I thank Mark for the hospitality as he disappears back into the crowd. I rejoin the festivities outside for one last time. A woman in fishnet stockings is dancing and twirling flaming batons, and as she spits a burst of flame that flickers shadows across many faces, I pencil the last sentence in my orange notebook, the last minutes of the night trickling down Hollywood Boulevard.

(Dawn Garcia: I want to say thank you, as always, to my friend Mark Houston for welcoming Cord on my behalf and thank Cord because I am so happy to have you on board as our latest novice writer. You are, in every literary way, a delightful muse of words dripping with color and charm. I also want to thank Kei Taguchi for his truly visually telling images! Welcome to ATOD Magazine™.)