Where the Funny Things Are: The Comedy & Magic Club

The tired windshield wipers on my ’65 Mustang were turning my view of Hermosa Beach through the drizzle into a smear of sloshing greys and blues. It was a gloomy Wednesday evening in July, hot & damp, reminding me of the sticky heat of summers in the woods of Upstate New York. I had been invited to The Comedy and Magic Club by the wonderful Ben Seidman (a great Magician and Comedian) to watch his buddy Andrew Norelli perform Stand Up. Having heard great things about the venue itself, which recently had its 35th birthday, it was a great opportunity to get acquainted.

Showtime was readily approaching, so after finding parking down the street, I hurriedly greet Ben as we made our way inside. The room was warm and inviting compared to the murky charcoal exterior. The carpet boasted abstract renderings of spotlights in amber, maroon, sage green and mustard. Lining the walls were large museum glass encased with comedy memorabilia. Just to our right was the Robin Williams android from “Bicentennial Man” and Ray Romano’s iconic flannel-and-jeans combo from “Everybody Loves Raymond”. Ben also said that they have some pretty neat vintage magic posters, but unfortunately I didn’t have time to see them.

Our seats were against the right wall, nestled in between two elderly women playing Sudoku and a middle-aged couple, also friends of Andrew’s. We caught Andrew on his way towards what he referred to as the Green Room, and chatted for a quick moment before the show was about to begin. Tall with wavy brown hair, he had a friendly, welcoming smile, and seemed genuinely pleased to meet me, asking about the magazine.

There is a two-item minimum during the performances, so I ordered a Gin & Tonic and the Apple and Gorgonzola Salad, and Ben ordered a Vodka Soda with Lime and the Firecracker Shrimp. My sources tell me that as far as the entrée selections go, the Filet and Salmon are both great, so I’ll make sure that next time I attend, I come hungrier!

The room lights dimmed, the curtain rose, and the edges of the stage lit up like a jukebox, glowing rainbow swirling at a diagonal. The spotlight kicked on and the first comic was introduced. I didn’t know how many people were to perform, as RodMan (the headliner) was the only one listed online, so I frantically wrote down their names from a picture Ben took of the set list. 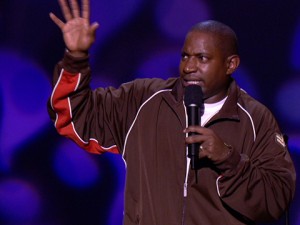 Francisco Ramos was the first to perform, and would serve as the emcee for the evening. Energetic and engaging, he played up his Venezuelan roots, talking about the benefits and disadvantages of having an accent.

Next up was Andy Woodhull, who emitted a very conversational vibe, more like a friend telling you stories, talking about his new role as a soon-to-be stepfather.

Chinedu Unaka was very relatable, talking about the unfortunate truths of ordering at Starbucks with a complicated name, and the fumblings of the less than sensitive baristas who work there. Sadly, from my experience working for Starbucks, it is a completely true and embarrassing scenario.

Hailing from London, Gina Yashere is not what you expect, Nigerian by heritage yet sporting a thick British accent. It’s a beautiful thing, and she does a good job of playing up the cultural differences between the UK, USA and Nigeria, as well as the idiosyncrasies of hotel cleanliness (or lack thereof). 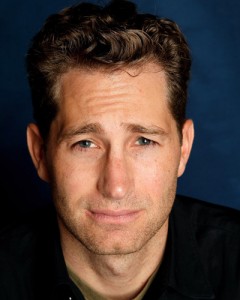 Andrew Norelli followed, and made the smart move of using very locally weighted topics like health nuts and social media. Since he was the performer we were primarily going to see, I had done some research on him, watching a few video clips of previous performances (including his spots on The Late Show with David Letterman and Comedy Central’s Live at Gotham) and I was impressed that everything I heard was fresh material, even making me cry over a flaxseed oil joke.

I was happily surprised that despite the increasingly audible responses from the crowd, that there wasn’t any heckling. But as soon as headliner RodMan took the stage, he made a point of addressing all of the front row patrons, namely a VERY “California”, tennis-playing couple and an elderly woman who was thoroughly engrossed in their dialogue. Some of his material I recognized from watching his videos on YouTube, but his phraseology, the delivery and tone that he uses to tell his jokes set him apart. As Ben put it, “he has one of the most unique cadences … no one can tell his jokes and have the same effect.”

Side note: Before the show had started, I had remarked on Ben’s tee shirt choice – a navy blue ode to Maurice Sendak’s “Where the Wild Things Are,” and thought to myself how fitting it was for the situation: a departure from the real world, leaving the stresses of the day outside, and as the night progressed, drinks were consumed faster followed by louder bursts of laughter. You could track the transformation of an unassuming room into a jungle inhabited by mischievous beasts engaged in a playful romp, only to return to reality when the house lights grew brighter, and waiters wove through the rows to clear away debris, and deliver change.

Later, I asked Andrew what his experience of The Comedy and Magic Club had been overall, both the venue itself and performing there, to which he responded:

“The Comedy and Magic Club is a special place. It has so much history and consistently has a crowd with a very high comedy IQ. The audience brings a focus and respect to the club that makes it feel like more of a theater show and less of a typical comedy club or nightclub.”

And it was true. Everyone in the audience had been engaged, clapping enthusiastically, and left with a smile on their face, happy sighs escaping their lips. As for me, I found it increasingly difficult to eat during the performance because I was laughing so much. The notes I was so determined to take turned into purple nonsense on the page.  I was laughing to the point that my eyes were watering, stomach aching from practically giving myself hiccups, making unnatural squeaking noises in between breaths and cheeks sore from constantly smiling. The experts aren’t kidding when they say that laughter is a workout, and what better place to do it than at a great venue like The Comedy and Magic Club.