The Rainmaker: Who Cares if its Not Feminism—Its True

The other day I reread Susan Patton’s letter to young women who attend Princeton.

In this letter, which spurred quite a bit of controversy in the weeks following its release, Patton asserts the simple idea that at no other time in their lives will these women have access to men who are not intimidated by their intellect or their ambition. With that in mind, these coeds should do their damndest to snag a freshman as soon as possible. She didn’t say that verbatim, but that’s the gist.

And you know what—she is right. I know this with absolute certainty because I’ve lived it. In college I had my pick of eligible, smart, sensitive, and thoughtful men. Post graduation, I had my pick of jerks. If once in awhile, an incredibly decent guy came around, he would inevitably be looking for someone younger and prettier, or as single women like to say euphemistically “emotionally unavailable.”

So when I saw N. Richard Nash’s dust bowl-era play, “The Rainmaker,” last Friday night, a show that I probably don’t need to tell you is recommended by the LA Times, my first thought was “yeah, it’s still relevant.”

The fear of being an unmarried, childless woman in her late 20s might not resonate so deeply as it once did in this age of post-feminism (now she can wait until her early 30s to freak out). Our collective idea of modern living assumes that if a woman is unmarried it is by choice. But I assure you, that fear and the self-doubt that accompanies such a situation is still deeply felt. We haven’t come such a long way.

In fact, it might even be worse now—because we aren’t allowed to talk about it without backlash, as Patton faced. At least when it was acknowledged that a woman needed a man to be whole, if she didn’t have one, she got some sympathy. These days an unmarried woman is assumed, at least superficially, to be a “career gal,” as a well-meaning, blundering ex-boyfriend called me during our 10 year high-school reunion. I recall that moment as one in which I wanted to confess (and I admit this with embarrassment), “No, I really do want to get married–it just seems that no one wants to marry me,” but instead laughed, murmured some half-hearted agreement and then quickly asked him about his two adorable children and his lovely, younger wife who didn’t finish community college.

I imagine Lizzie Curry, the near spinster in “The Rainmaker”  bashing the guy over his head and then going to cry in her room—and I mean that in the best way possible. I know Lizzie. I know her because Tanna Fredrick plays Lizzie Curry like the woman we all want to be. Tough, capable, vulnerable, and yes, beautiful. Ms. Fredrick so seamlessly embodies Lizzie and it barely matters when she breaks character, as she did once in the performance that I noticed, during which the staging calls for her to slam her fist on the table in frustration, and Ms. Frederick accidentally smashes a plate instead. The only thing that revealed that it wasn’t in the script was due to the way the other characters chose not to notice.

Frederick is also in luck with her “men.” The ensemble cast, all part of The Rainbow Theater Company, has an easy sense of trust that only comes with an experienced group. The scenes with Fredrick and her father, H.C. Curry, played by Stephen Howard are the most moving. Howard is winning as a loving and understanding father who really does see his hard-working daughter as a beauty.

Also charming is the most innocent of her brothers, the comic foil, Jim, played by Benjamin Chamberlain. Chamberlain isn’t above playing the fool with dim-witted gusto, and to an enjoyable effect. He also captures Jim’s loyalty and kindness.

The no-nonsense brother, Noah (excellent David Garver), works to keep his family together, even as he undermines their chances for happiness. It’s a complex role, and one difficult to play with as much likability as Garver is able to achieve.

With such an excellent cast, it’s easy to nitpick. The only off note comes from Robert Standley’s Starbuck. Starbuck is supposed to be a charming con man, but on Standley, the snake oil is a little too thick. Still in later love scenes, he embodies the hope and confidence of a true “confidence man”—one that is able to inspire the confidence of others.

The tale is a familiar one—resting on the idea that nobody can love you until you love yourself. But of course this internal struggle to believe in ones own beauty comes much easier when surrounded by people who already believe in it for you.

“The Rainmaker” is presented by Henry Jaglom & The Rainbow Theater Company, in association with Edgemar Center for the Arts. The show is directed by Jack Heller and produced by Alexandra Guarnieri. 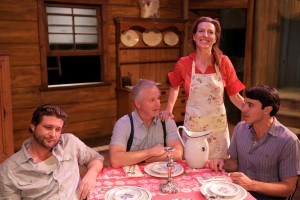 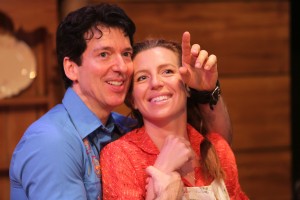 “Rainmaker”
A play about love, desire &  magic.
Dreamers on a hot summer day prove that our faith in miracles never quite dies.
LA Times critics choice!!!

“UNLESS YOU SEE THE CURRENT PRODUCTION OF “THE RAINMAKER” AT THE EDGEMAR CENTER YOU’VE SIMPLY NEVER SEEN THIS PLAY… IN A DEFINITIVE STAGING, DIRECTOR JACK HELLER CRAFTS A STRIKING SPECIFIC PORTRAIT OF A BYGONE TIME…
AS FOR THE PERFORMANCES, EACH SHOULD BE DISTILLED, BOTTLED AND PRESERVED FOR POSTERITY… THE CAST SHINES BUT THE STANDOUT OF THIS TERRIFIC CAST IS TANNA FREDERICK’S ASCERBICALLY YEARNING LIZZIE.
PLAIN AS MUD IN THE EARLY SCENES, FREDERICK LETS DOWN HER HAIR WITH STARBUCK – AND, BY SOME MAGIC OF THEATRICAL ALCHEMY –  BECOMES A GENUINE BEAUTY. IT IS A TRANSFORMATION NOT TO BE MISSED!” –

Coming to The Edgemar Center For The Arts, playing “Lizzie” opposite Robert Standley’s “Starbuck”

AND SHOWING SCENES FROM THE PLAY WITH THE CAST!

All proceeds from this performance will be donated to Peace Over Violence. Established in 1971, Peace Over Violence is a sexual and domestic violence, stalking, child abuse and youth violence prevention center headquartered in Los Angeles and dedicated to building healthy relationships, families and communities free from sexual, domestic and interpersonal violence. One of the first agencies of its kind in the country, POV has been committed to social service, social change and social justice for over 40 years. POV’s innovative programs are comprehensive and include Emergency, Intervention, Prevention, Education and Advocacy services. For more information, please visit www.peaceoverviolence.org