Double Header of Talent: Shaun B and Orlando Napier at Harvelle’s 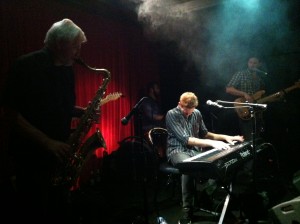 I’m sitting on a leather stool inches from the stage, surrounded by inky blacks and red upholstery. Underneath the slow whir of ceiling fans, a crowd with cream-colored fedoras, thick-rimmed glasses and red leather pants starts to build on the checkered dance floor of Harvelle’s in Santa Monica–a club sandwiched between boutiques and tourist traps, a neon sign above illuminating only a few letters, standing out like a sore thumb. Inside, people are swaying, clinking glasses of bourbon to the playful set of Shaun B., the first performance of a double header also featuring Orlando Napier (The Voice). Shaun is sporting a colorful blazer patterned like butterfly wings, fluttering his fingers across keyboard keys and crying out lyrics with the energy of Stevie Wonder and confidence of Ray Charles. The contagious energy awakes guests from their tables and soon the dance floor is full of swinging necklaces and undulating hips. He is soon joined onstage by colorful singers and a man in a blue and pink luchador mask as backup keyboardist.

I find myself unconsciously tapping my pen on my notepad to the rhythm of the music, the lights overhead bathing me in greens and blues that color me with excitement– as well as the man leaning against the wall to my left. He is a thin, handsome man in a striped shirt and jeans, sipping on Stella Artois and bobbing to the music–and I realize it’s the second headliner of the night, Orlando Napier–and since we are standing inches from the speakers, I flip into a blank page of my notebook and write “Break a leg up there” and hold it up to him. He smiles and shakes my hand twice before hopping on stage, embracing a glistening-with-sweat Shaun B. who concludes his set with supercharged covers of Stevie Wonder and The Turtles’ “Happy Together.”  As Shaun exits, I shake hands with him for an incredible show; a performer I not only didn’t expect to see, but was supremely impressed by. He thanks me with an infectious grin.

Second in the batting order, Orlando, the artist I’m here for. He gives me a silly, sexy pose and points to me as I take a snapshot of him, and then unbuttons his shirt, which draws eager shrieks from the women in the crowd – and one bearded man. Then he is joined onstage by a drummer, guitarist and tenor sax man, his father and former band leader Hugo – or “Pappy Nappy” as I like to call him – (granted wrongfully I think it’s clever, and secretly hope it catches on).

The set begins and Hugo serenades smiling faces with the purr of his saxophone, Mr. Napier tapping his feet and raising an arm to the sky, singing and scatting with the authority of a much older jazz musician. He sifts his fingers through his hair as the heat in the room plucks beads of sweat from the crowd’s foreheads. Like Shaun B., Orlando throws his heart on stage, dropping to his knees in surrender to the music and snapping his head back and forth like a bullwhip, cracking smiles across faces on the dance floor. A fog machine on stage cloaks the audience in a layer of smoke that serves as tribute to his fiery, magnetic performance; and as he blazes into a cover of Bill Withers’ “Lean on Me,” there’s a crackle of snapping fingers and clapping hands from women having sweet nothings whispered into their ears.

Napier’s set is certainly mellower than Shaun B.’s, yet the different styles of each performer work amazingly as a doubleheader, and together, because it isn’t long before Napier’s set concludes with Shaun B. jumping on stage to share a piano with him, fusing their styles together in a roaring finale that speeds up tempo and proves how versatile each performer is. Clapping, dancing, and toe tapping begin to converge into a collective sound of ecstasy from fans of both artists.

The final song of Napier’s comes to a close as lights dim to a murky red, similar to the neon sign advertising the club outside, ceiling fans are cooling sweat spackled on foreheads, and the fog on stage billows into the audience one last time, blanketing a sashaying woman in grey, until only the shimmer of her necklace is seen.

I’d like to thank Harvelle’s, Shaun B., David Tran and Orlando Napier for a wonderful night of great music and fun. The bubbly energy of Shaun B at the beginning of the night spread across the crowd and remained until the last note was played.

(ATOD Magazine – Editor, Dawn Garcia: Orlando first was introduced to me by seeing him play at the Piano Bar in Hollywood. His voice, his masterful confidence as he sang with a tone that crept up through the air like a perfect breath of conviction and sensuality, and then – the way he glided across the keys of the piano – well, one is dared not to feel it seep into your soul. This is why he is the 1st Artist featured in the brand new WebSeries set to launch late this Fall. Orlando is unlike any other talent I have ever come across and every time you have an opportunity to see him, I implore you to go. You will never be disappointed.)