The Challenge is on …

The day ends and a different kind of Food Event is about to begin. A culinary world, an incredible global community created to support chefs and their passions and push them to be their best – at all times; Something I wholeheartedly subscribe to. While we are flourishing with the Celebrity Chef nuance, I love to see these chefs dig deep and go back to doing what they love most: COOK. While the Food & Wine Festival is in full swing by day, it is the evening events that feed me in all ways. Tonight a few hundred gather at Butler Park in the center of Downtown Austin intrigued by the music blaring from the stage as the DJ plays Lenny Kravitz, “It Ain’t Over til It’s Over” as I enter (oddly perfect since I just interviewed his Producer and friend, Mathieu Bitton a few weeks prior) and the smiles of those eagerly waiting in line to feast on tacos presented by some of the best chefs in the US. While the 2012 Champion, Chef Tyson Cole was there to defend his title, the competition was fierce and the judges: Andrew Zimmern, Graham Elliot, and ZZ Top’s Billy Gibbons this was sure to be quite the lineup. I meet up with Jason Dady’s PR gal, Emily Reynolds Stringer and Chef “Tim the Girl” McDiarmid to feast on the festive tacos being served up by the Chefs themselves. No pretension here, this is an all out competition and these guys and gals are playing for the win. I scurry as quickly as possible with the gals through as many taco tastings as possible. Sometimes we split off to cover more ground because after all, there are over a dozen different options! Pretty soon we’ll need a stretcher to lay us out just to digest! While every taco looked divine and I had the truly distinct honor of meeting and chatting with almost every chef, there were my favorites. How did I choose? Solely based on taste. Presentation in a taco is far less impressive to me if the flurry of flavor isn’t oozing through every bite. Being of Spanish and Mexican descent, taste to me, especially in a taco, is hard to hide behind a pretty disguise. I didn’t taste every taco but I did taste most. I missed Rene Ortiz’s, Christina Tosi’s, David Bull’s, Bryce Gilmore’s, Tony Mantuano’s, Vinnie Totolo’s, Laura Sawiki’s, and Jon Shook’s. I had no more room left in my stomach! The most wonderful and warming aspect of this evening was the people that came out in droves to support every Chef, cheer them on steadily, try as many variations as one could, sip on delicious wines and spirits, and just take in the ease that is Austin.

Tyson Cole‘s taco was a hamachi taco with almonds and the beauty and innovation with his taco was the taco shell itself. A Rice based shell it was delicate, simple, and refined. The Judges awarded him this WIN for the 2nd year in a row. The best part was when it was announced, we were standing right at the UCHI table and the entire staff burst out in applause and enthusiastic pride. 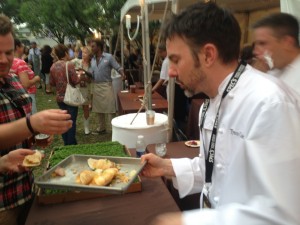 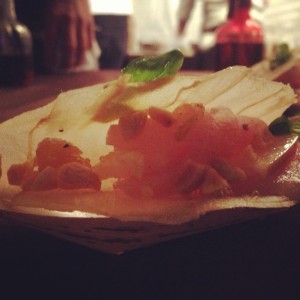 The only Meatless Taco on site and this taco was not only original but so beautifully seasoned in spice, texture, flavor, and blend of both legumes and veggies that it really stood out. Potatoes and rajas taco. 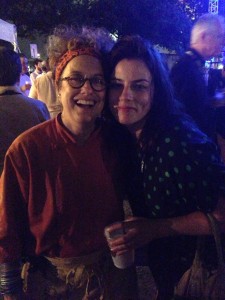 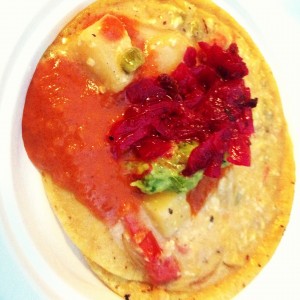 This taco had so many gorgeous components between the meat, the radish, the crisped pork and avocado puree, it was impossible not to find the most enticing harmony with everything on the plate. 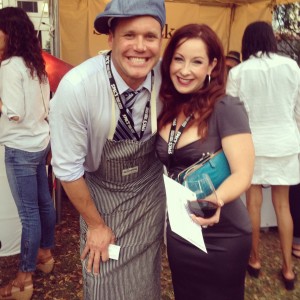 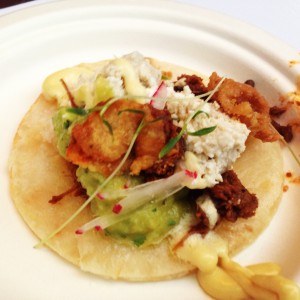 Tim did something I am far more familiar with with a juicy cut of steak but what made his taco utterly and undeniably delicious was the chile basted lime that we were all instructed to use as a chaser. This was a pure and well made taco. 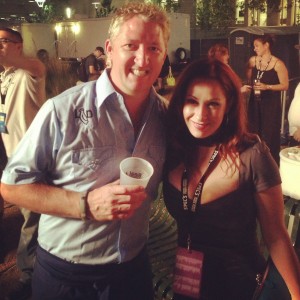 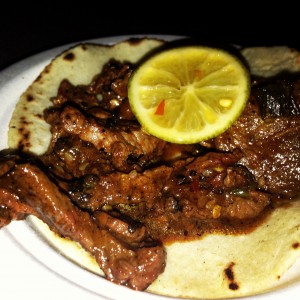 Jonathan created a taco that had such interested components, adding that asparagus really did make it more fun to bite on. The pic below is of one of his Chefs who was there on his behalf. 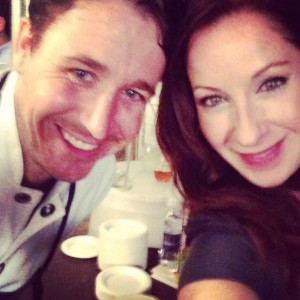 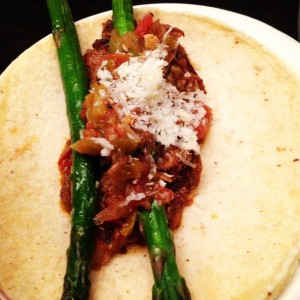 Marc’s taco was easy, meat cooked flawlessly, and surprised the palate with a unique culmination of spices and sauce. 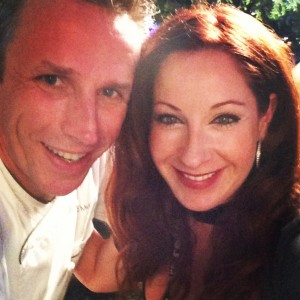 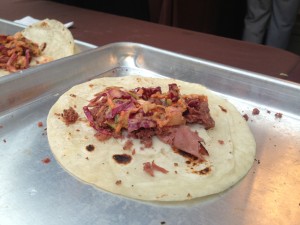 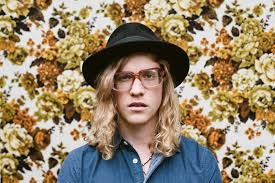 the beckoning of soul was beating against us, the instruments sound and the voice of a man that I cannot help but describe as perfection walks on to the stage. Hat on, jeans affixed to his body, shirt listlessly resting over a tee, he steadily reaches for the mic and begins to sing a rendition of Bob Marley’s “One Love”. Every word that trickles from his mouth oozes sexy. EVERY. ONE. The way he moves confidently across that stage, soul bare, as genuine contentment looms out to everyone that finds themselves drawn to him like bugs to a bug zapper (a newfound reference for this California girl), he plays us like a Pied Piper. In essence, as soon as he begins, he has you. Gripping onto you, playing fervently to every awaiting ear, somehow, in that moment, I can’t help but kick off my heels, lay my clutch at my feet, and just let the beat direct my hips to sway back and forth as he sings. It’s like a young, more handsome and eager Mick Jagger is reincarnate and without warning, the rainclouds gallop in. Droplets fall onto the crowd one by one until, as he sings Sugar Ray, the torrential downpour begins. The crowd thins but not me. No I stand there in my beautiful PinUp Girl dress by Laura Byrnes and I let it saturate my finger-waved red hair, the dirt now forming into mud gushing around my toes and yet – I still dance. And as I look to my left another girl, beautiful and overdressed is also standing dancing in the pouring rain, eyes closed, and just past her – the man in the tuxedo shirt, Mister Graham Elliot. Others have jackets over them or umbrellas to offer shelter but not us. We wade happily as the rain washes over us and Allen soothes our very core until eventually, the threat to the equipment is too great and he and the band have to call it a night. It was worth every second of muddy feet, ruined hair, and that wet cat look I now have to sport. This is, after all, a once in a lifetime experience. And so ends Rock Your Taco. Now … off to the W Hotel Austin. Pedi-cab anyone?

“On Saturday night, Austin’s own reigning champion Chef Tyson Cole came back to defend his title for the greatest taco in the land – and was victorious once again! The country’s top chefs went head-to-head putting their own take on the tortilla-wrapped treat. Guests got in on the action as well, rubbing shoulders and taking bite-sized bribes from the chefs themselves.

Attendees got to sample each inventive taco creation from contenders such as Marcus Samuelsson, Susan Feniger, Tim Love, and more, and washed them all down with the perfect beer, Chateau St. Michelle wine or tequila pairing. With the retro-soul of Allen Stone, Rock Your Taco was an incredible evening under the Texas stars! See below for mouthwatering pictures from Republic Square…”

So, as many of you know, I am a full-grown man. I chop wood, wear flannel, play a contact sport, drink beer, do dumb things with my friends, and eat an excessive amount of meat. I like to pride myself on my carnivore-like nature. Walking through the welcome gates at the OC fair, I experienced the beginning stages of a meat stroke. Then proceeding further through the smoke and smells of my paradise, I came to behold Juicy’s World Famous BBQ … They had an eighteen wheeler truck BBQ station, with over 300 turkey legs in sight, a brisket bigger than my torso, giant western sausages that could overflow an Olympic sized pool, and onions and peppers for days.