Making a Difference One Step At A Time

Fashion sometimes is far more than stitching and fabric – it can be making a difference. ATOD Magazine is so proud to be partnered with TOM’S Shoes because like us, they support art and humanity.

Philanthropy became their business and that is why this week I am focused on showcasing some of my favorite TOM’s finds for the fellas. Each product links directly to the store for purchase.

“Be the Change” Graffiti Men’s Classics

Keep them close to your heart. The Giving Pair Necklace is a hand-made tribute to the children you’ve helped and the shoes you’ve given along the way. Crafted by jewelry artist, Thomas Mann, this delicate pewter charm is laced with a subtle black cord.And as always, with every necklace you purchase, TOMS will give a pair of new shoes to a child in need. One for One.

Blake Mycoskie is the Founder and Chief Shoe Giver of TOMS, and the person behind the idea of One for One, which has turned into a global movement. TOMS has given over 10 million pairs of new shoes to children in need since it began in 2006. The company also recently expanded its unique business model to include TOMS Eyewear, helping to save and restore sight for those in need.

TOMS humble beginnings happened unintentionally. While traveling in Argentina in 2006, Blake witnessed the hardships faced by children growing up without shoes. His solution to the problem was simple, yet revolutionary: to create a for-profit business that was sustainable and not reliant on donations. Blake’s vision soon turned into the simple business idea that provided the powerful foundation for TOMS.

Over the course of its first five years, TOMS was successful enough in providing shoes for children in need. But Blake, having recognized other vital needs during his travels around the world, realized that One for One could be applied to more than shoes. He developed the idea for TOMS Eyewear in which for every pair of eyewear purchased, TOMS would help give sight to a person in need. One for One.

From shoes to eyewear and now a book, Blake’s unique approach to business has awarded him with numerous accolades. In 2009, Blake and TOMS received the Secretary of State’s 2009 Award of Corporate Excellence (ACE). At the Clinton Global Initiative University plenary session, former President Clinton introduced Blake to the audience as “one of the most interesting entrepreneurs (I’ve) ever met.” People Magazine featured Blake in its “Heroes Among Us” section, and TOMS Shoes was featured in the Bill Gates Time Magazine article “How to Fix Capitalism.” In 2011, Blake was named on Fortune Magazine’s “40 Under 40” list, recognizing him as one of the top young businessmen in the world.

Before TOMS, Blake, a native of Texas who always had an entrepreneurial spirit, started five businesses. His first was a successful campus laundry service, which he later sold. Between business ventures, Blake competed in the CBS primetime series, The Amazing Race. With his sister, Paige, Blake traveled the world and came within minutes of winning the $1 million dollar grand prize.

Blake is an avid reader and traveler. He is passionate about inspiring young people to help make tomorrow better, encouraging them to include giving in everything they do. His hope is to see a future full of social-minded businesses and consumers. 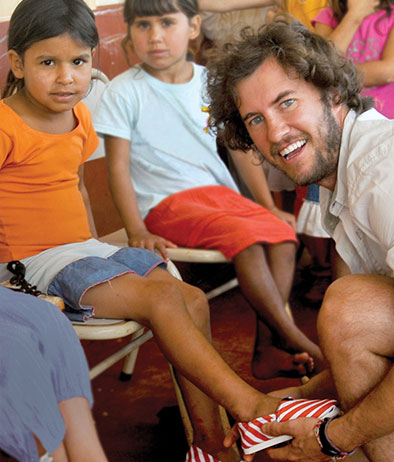 ATOD on Hiatus   hile the summer…