Cabernet and Red Bordeaux Varietals that will send your mouth soaring …

Paso Robles is one of California’s most beautiful little secrets – though now, after being named the wine region to watch – it is a city making an impact. And producing some of the most illustrious wines! I have been invited to go visit the region for an entire week so next week you can expect to see some photos that will make you salivate from the vineyards to the helicopter wine tasting tour to delicious cuisine. I will be spending a week at the beautiful Villa San Juliette with one stop at Summerwood Resort & Winery. For those of you who want to experience something truly magnificent, I encourage you to purchase tickets. There are a few left and the Event begins Wednesday with a grand gala Saturday night.

After the success of the inaugural CABs of Distinction event (launched last year to celebrate and promote Cabernet Sauvignon and red Bordeaux varietals produced in Paso Robles, California) and the increased exposure and credibility from Paso Robles being named Wine Region of the Year by Wine Enthusiast Magazine, the PRCC has geared up for even more exciting events in 2014. The CABs of Distinction events will take place in locations across the Paso Robles AVA with enhanced sommelier, media, trade and consumer experiences.

The five-day event begins with the first annual CAB Camp, April 22-24.  In collaboration with The SOMM Journal, the PRCC has developed a three-day, comprehensive and educationally-focused tour that will explore Cabernet and red Bordeaux varietals in Paso Robles. The 20 select sommeliers and key wine buyers will gain in-depth knowledge of the promise of these varietals from the Paso Robles AVA (American Viticulture Area). The behind-the-scenes educational experiences will include component tastings, analysis of clonal selections, barrel tastings, vineyard tours, En Primeur barrel tasting of the 2013 vintage, current vintage tastings, a Library/Rare and Reserve tasting that will show the ageability of these wines, winemaker dinners, a zip-line tour over vineyards, and more.

Media- and trade-only events will be held April 23-25. The PRCC has made complimentary tickets available for qualified media and trade to attend educational events that will shed light on the true potential of Cabernet and red Bordeaux varietals from Paso Robles. The non-profit association of 28 winery members will host: En Primeur barrel tasting from the as-yet-unreleased 2013 vintage at 3:30 p.m. followed by a tasting of all current vintage red Bordeaux varietal wines on April 23 in the Paso Robles Inn Ballroom. The following day will include a vintner panel discussion at 10 a.m. moderated by Matt Kettmann, contributing editor of Wine Enthusiast and senior editor of Santa Barbara Independent. The afternoon will then transition to the Library/Rare and Reserve tasting beginning at 2:30 p.m. after lunch. Friday, April 25 will consist of self-directed events at member wineries and winemaker dinners in the evening.

Access to the media- and trade-only events can be requested by emailing info@pasoroblescab.com

Consumer-focused events will take place April 25-26. These two days will showcase spectacular quality wines from producers of world-class Cabernet Sauvignon and red Bordeaux varietals. The weekend begins on Friday with wineries hosting various events throughout the day and winemaker dinners at wineries and in Paso Robles’ most sought-after restaurants at night.

Luxury VIP ticket holders will start the day with an intimate private vintner-hosted reception and lunch at Thomas Hill Organics in downtown Paso Robles at 11 a.m. The indulgent multi-course menu will be paired with select Cabernet and red Bordeaux wines creating a palate experience like no other. After lunch, enjoy complimentary shuttle service to the event site where you will be the first to arrive and taste through member renowned reserve wines at 1 p.m. VIP guests will have private access to a VIP Lounge throughout the day, and continued access to the Gala from 2-5 p.m.

Premium-Reserve VIP tickets are also available for early entry to the Reserve Tasting at 1 p.m., access to the VIP Lounge throughout the day, as well as full access to the Gala.

Tickets for the CABs of Distinction Gala event can be purchased at www.pasoroblescab.com. The website includes member winery details and contact information, trade tools and the PRCC blog with extended member features, harvest reports and other news. 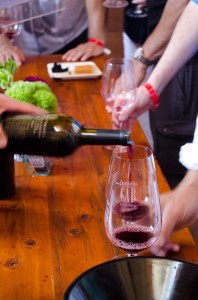 ABOUT THE PASO ROBLES CAB COLLECTIVE

Brought to you by our friends at:

I have been to Austin twice in my life. This April was the 2nd time. This time I was greeted by familiar faces, succulent food, savory sweets, open minds, exquisite talent, momentous friends, and a slew of food, wine, life, travel, and culture lovers to which degree I have quite possibly never encountered before. Passion and a thirst for life was present more so than I can remember on this wonderful trip to Austin all in the name of the 2013 Austin Food & Wine Festival.