FROM OUR EDITOR: I most recently came across an exquisitely talented pastry chef. Her recipes (and photos) make your mouth water. I couldn’t help but share her delightful creations with all of my readers. I encourage you to visit her site.
Bojon Gourmet | FACEBOOK | Twitter | Pinterest 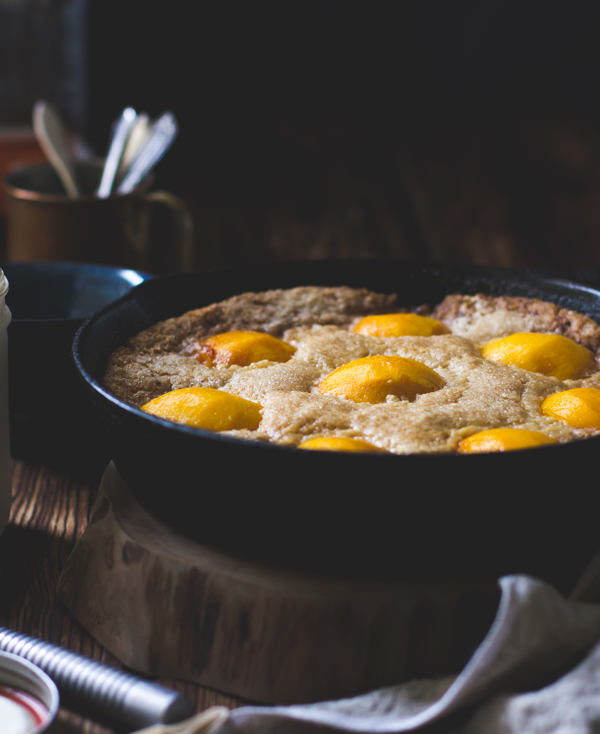 For the past few weeks, I’ve been hearing talk of summer being over, presumably because of school starting back up in many places. Being neither in school, nor knowing many people who are, the notion of summer being over in mid-August perplexes me. Summer break may have ended, but the season itself doesn’t officially end until September 21st, and it doesn’t even unofficially end until next Tuesday, post Labor Day. 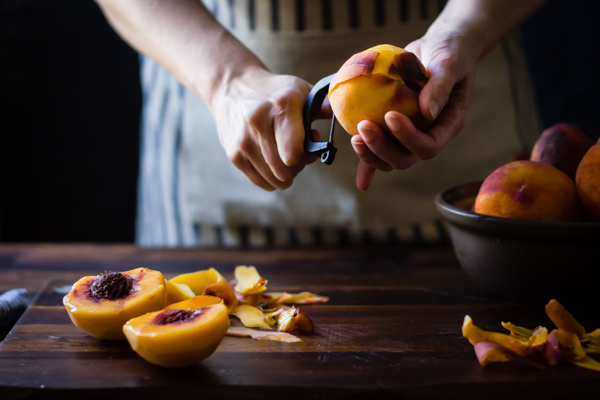 Unlike the rest of the Northern Hemisphere, summery weather doesn’t usually hit San Francisco until September, October, and occasionally November, when Karl the Fog takes his summer vacation. (Yes, our fog not only has a name, he also has an Instagram and a wicked sense of humor.) 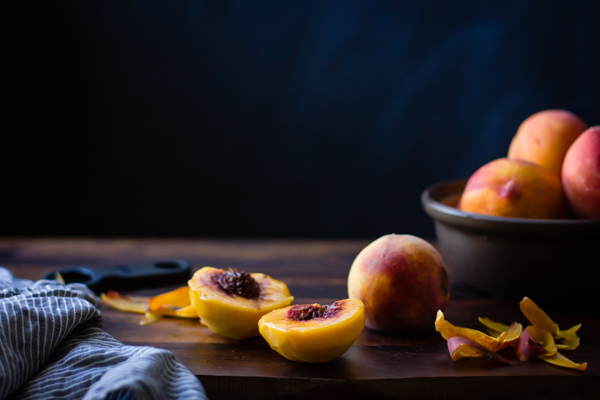 Here in San Francisco, most of our summer looks like this at 2:24. 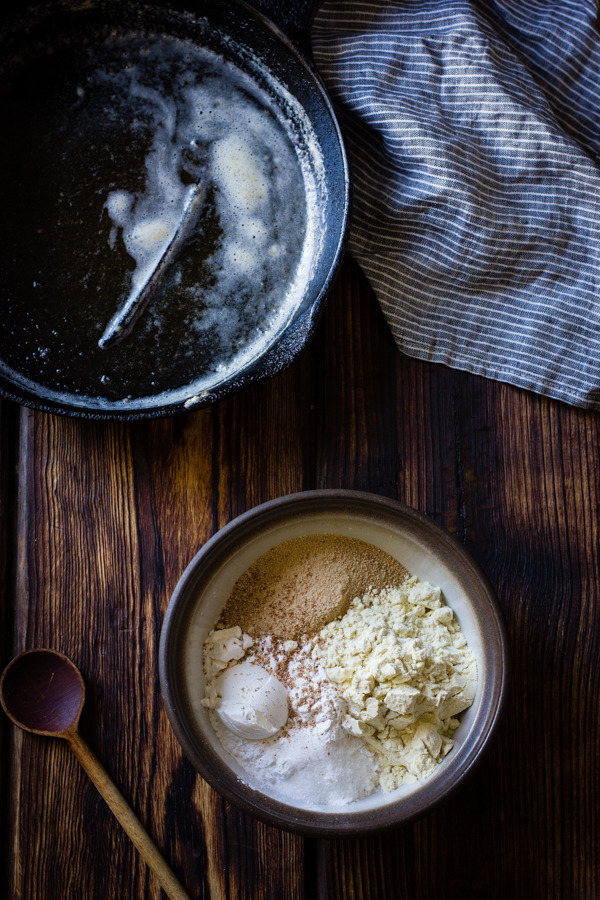 For me, summer just began last Tuesday. San Francisco farmer’s markets and I have a rocky past, so when my friend Lea invited me to join her in Oakland at her local market, I jumped at the chance. “It’s pretty small,” she warned. But compared to San Francisco’s markets, this one was palatial, taking up two wide blocks, and brimming with dozens of organic farm stands, each more plentiful than the next. I thought I’d died and gone to heaven. There was so much space to walk around, and no one cut in front of me in line or elbowed me out of the way. I even set my germ phobia aside to taste some stone fruit, which was piled high at nearly every stand. 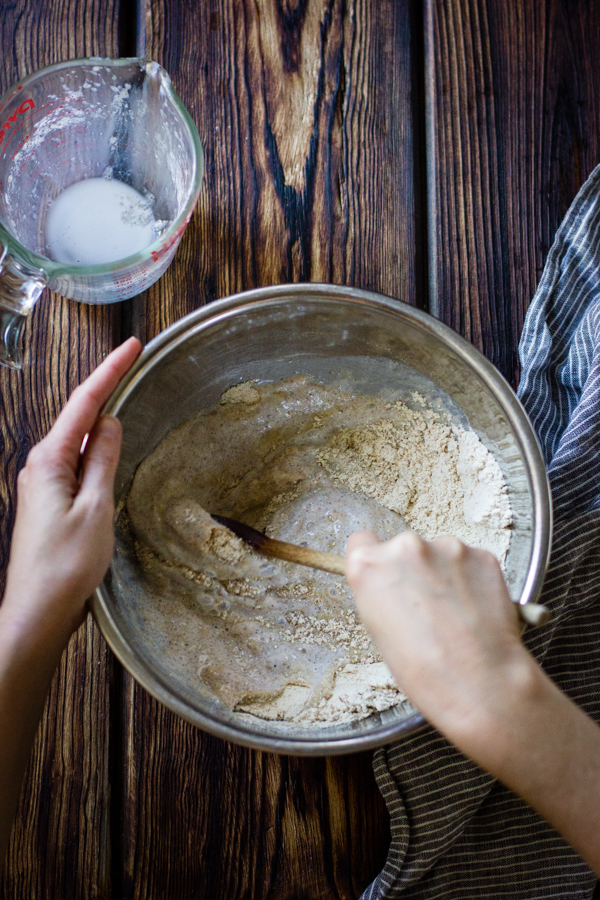 We stopped at one stand that had a large crowd gathered around a mountain of Oh Henry peaches. I sniffed one, and it was like summer has exploded in my nose. We waited for a sample and, after slipping slices of dripping, bright orange peach into our mouths, we both grabbed a bag and started loading up. 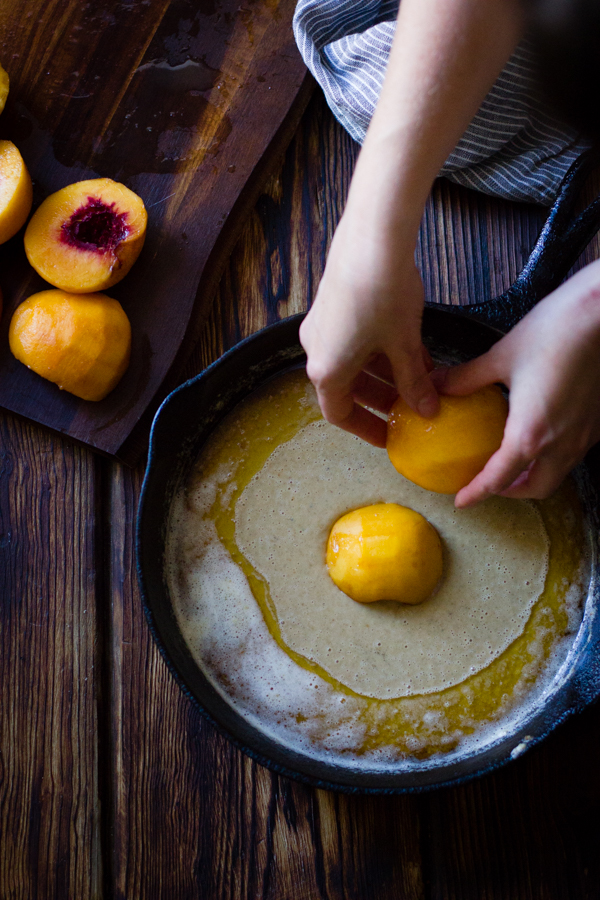 The peaches of late summer are larger and heavier than their June counterparts. Their flesh is dense, their sweet-tart flavor more robust, making them better for baking than the peaches of early summer that taste soft and floral and seem too precious to squander on a pie.
The Oh Henries were destined for this recipe, a Southern-style cobbler discovered and adapted by my friend Amelia. While I normally think of cobblers as sliced fruit topped with biscuits resembling cobblestones, this is the inverse: a custardy cake batter topped with peach halves. I’m having trouble finding definitive information on the different types of cobblers, but this version seems to have its roots in the South. Either way, it is quite delicious, and easy to make. 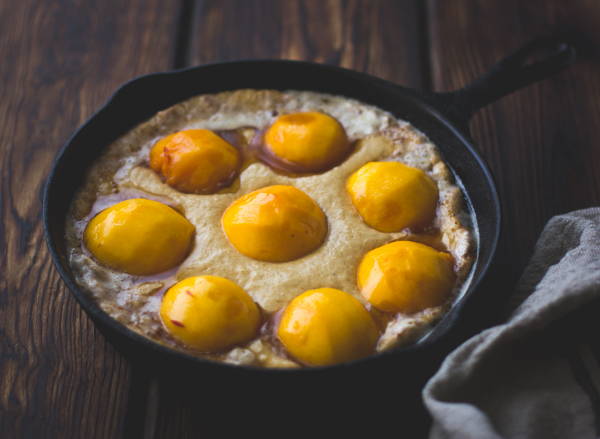 Butter is browned in a skillet, then topped with a loose batter made from flour, sugar and milk and crowned with peach halves. The batter puffs up around the fruit, soaking in the golden butter as it bakes. I added a vanilla bean to the browning butter, which made me think of maple sugar and nutmeg, so I added those to the batter. When Amelia and I tasted the final result, we both thought “bourbon!,” so we sprinkled some over the baked cobbler, which added a bit of boozy tartness. 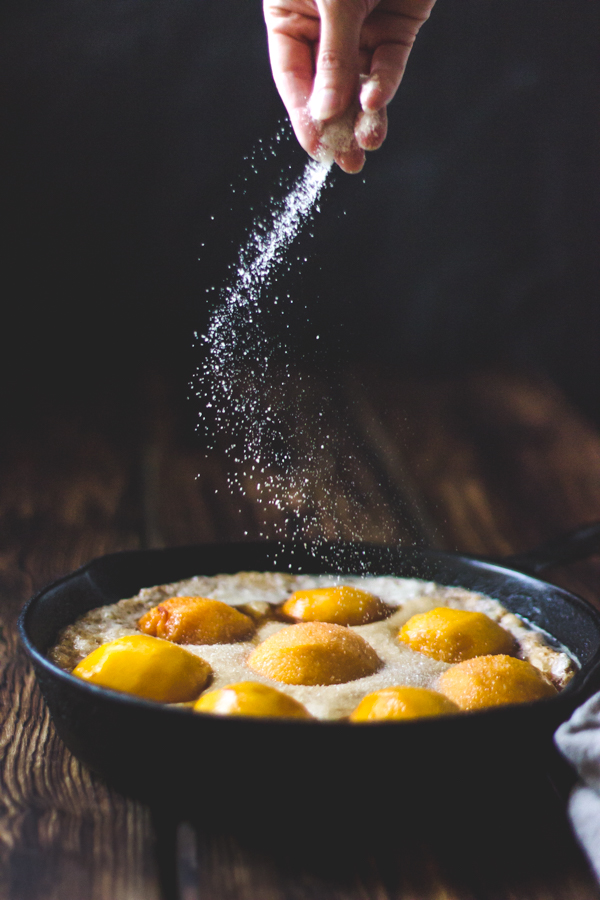 The dessert comes out like a pudding cake of sorts, gooey and warm, with addictively crispy edges. The peaches soften a bit, holding their shape in perfect little orbs, tender and juicy. We topped bowls of the warm dessert with Vanilla Buttermilk Ice Cream, which makes a cool and creamy foil to the warm fruit. 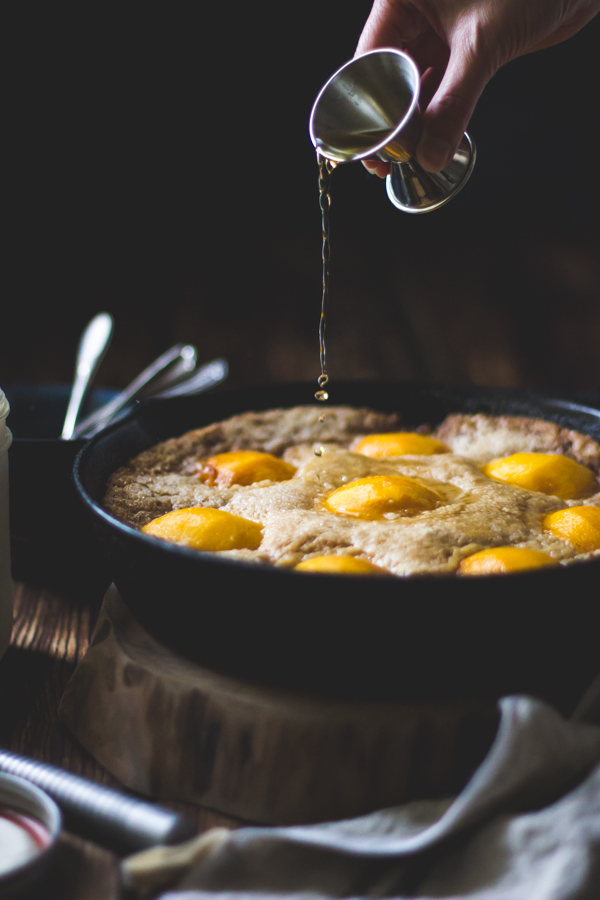 To make this gluten-free, we first tried 3/4 cup millet flour, 1/4 cup tapioca flour, and 2 tablespoons cornstarch. This combination worked beautifully, but when we added the bourbon, it brought out the bitter notes of the millet and tapioca. We switched to a combination of sweet white rice flour and less millet, with gave the cake a puffy, smooth texture and milder flavor. The one caveat is that the high moisture content reacts with the rice flour to make a slightly sticky/chewy texture. Next time, I’ll try swapping in 1/4 cup sorghum flour for an equal amount of the sweet rice flour, but I wanted to get this recipe posted in time for Labor day festivities, while it is still semi-officially summer. 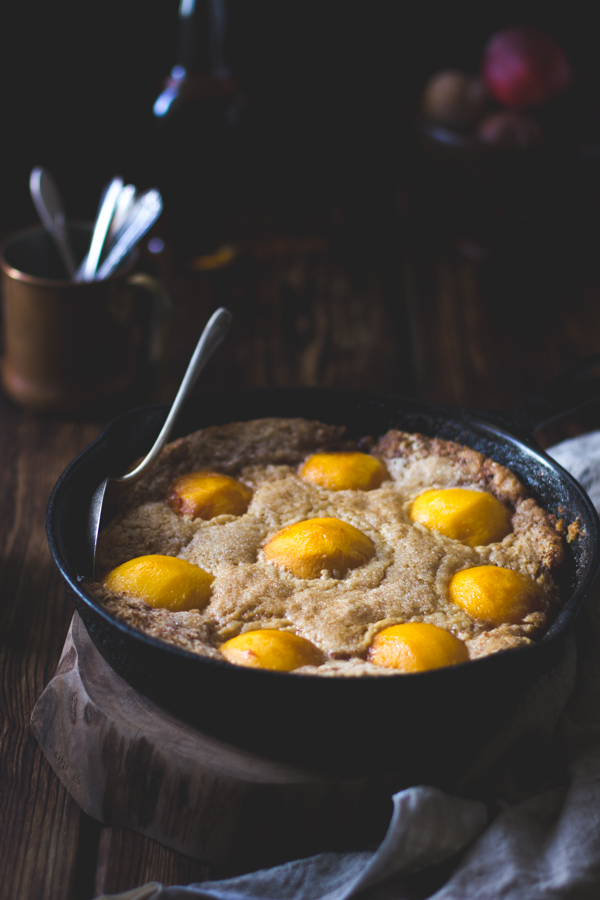 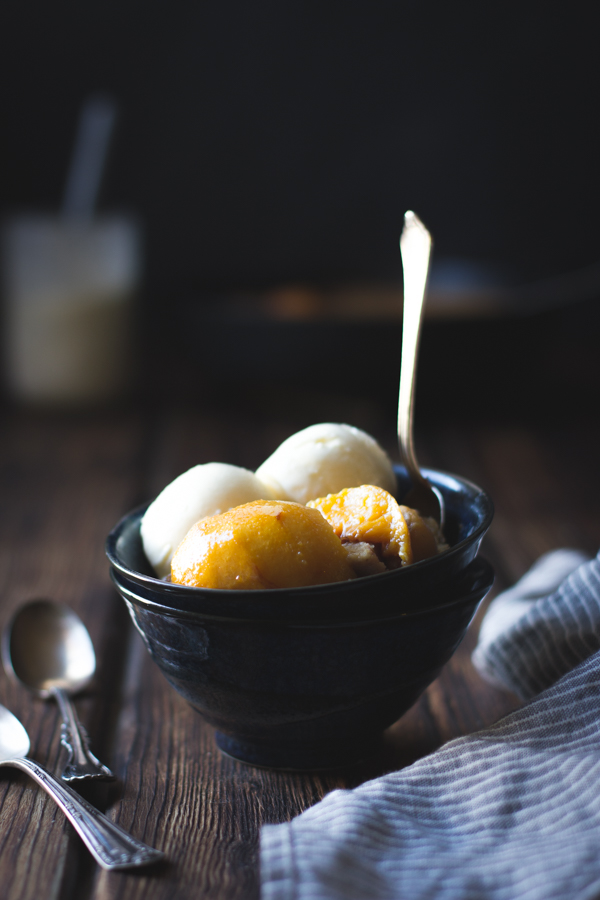 Besides, I won’t be able to get my hands on any Woodleaf Farm peaches before next Tuesday when I journey back to Oakland for my farmer’s market fix. 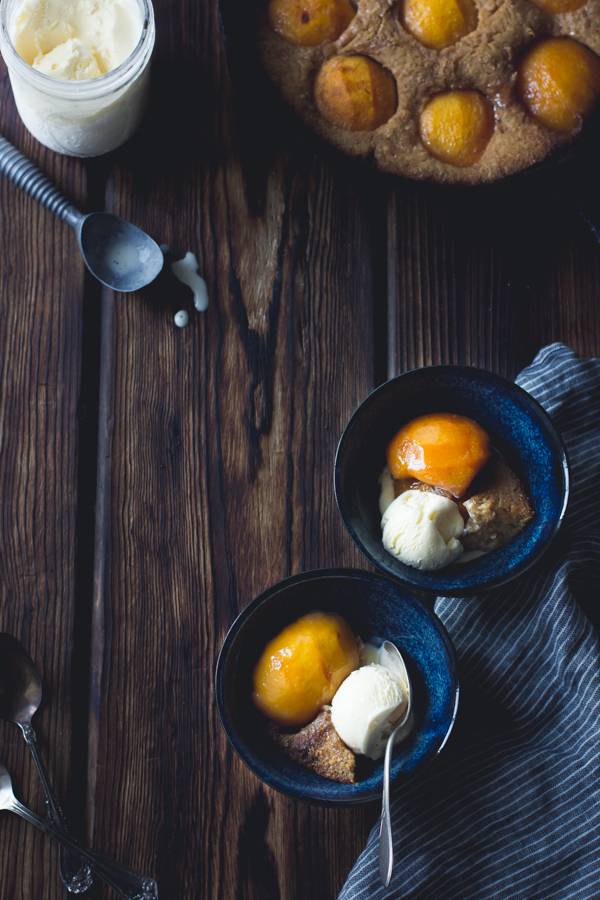 Wishing everyone a happy rest-of-summer, however long it lasts.
Millions of peaches:
Maple Sugar, Bourbon + Brown Butter Peach Crisp
Rosemary Peach Maple Leaf Cocktail
Vanilla Brown Butter Peach Buckle
One year ago:
Padron Pepper and Goat Cheese Tacos
Southern-Style Peach Cobbler with Maple Sugar, Bourbon + Brown Butter {Gluten-Free}
Adapted from my friend Amelia, who adapted it from an online recipe she jotted down years ago
I used millet and sweet white rice flours here, but I think regular rice flour, sorghum flour, or an all-purpose flour blend would work well, too. If gluten isn’t an issue for you or your guests, feel free to make this with 1 cup all-purpose flour, omitting the cornstarch and chia. I’m fairly certain that you could use buttermilk in the batter in place of whole milk if you prefer. If you don’t have peaches, I think this could be made with apricots, plums, poached pears or quinces, and/or berries instead.
All ounce measurements are by weight.
Makes 6-8 servings
6 tablespoons (3 ounces / 85 grams) unsalted butter
1/2 plump vanilla bean, split lengthwise and scraped
1 cup (8 ounces / 235 mL) whole milk
1 tablespoon ground chia seed
3/4 cup (3.75 ounces / 105 grams) maple sugar (or light brown sugar)
1/2 cup (2.75 ounces / 80 grams) sweet white rice flour
1/2 cup (2.5 ounces / 70 grams) millet flour
2 tablespoons (.5 ounces / 15 grams) cornstarch
1 1/2 teaspoons baking powder
1/2 teaspoon fine sea salt
a good grating fresh nutmeg (~1/8 teaspoon)
4-5 medium-large peaches, ripe but firm, peeled and halved, pits removed
2 tablespoons organic blonde cane sugar (or maple sugar)
2-3 tablespoons bourbon (optional)
vanilla or vanilla buttermilk ice cream, for serving
Position a rack in the center of the oven and preheat to 350ºF.
In a 9- or 10-inch oven-proof skillet, melt the butter with the vanilla pod and scrapings over a medium flame. Continue cooking, swirling the pan occasionally, until the butter turns golden with dark flecks and smells nutty, 5-10 minutes. Remove the pan from the heat and set aside, removing the vanilla pod once you are ready to add the batter.
Meanwhile, stir together the milk with the chia seed and set it aside to thicken. In a large bowl, whisk together the maple sugar, rice flour, millet flour, cornstarch, baking powder, sea salt and nutmeg. Whisk in the milk mixture until the batter is smooth and well-combined. It will be fairly runny.
Pour the batter into the hot, butter-filled pan. Place the peaches atop the batter, cut-side down, and sprinkle all over with the sugar. Bake the cobbler for 30-40 minutes. It is done when:
-The edges are puffed and golden and pulling way from the sides of the pan.
-The peaches are bubbling furiously.
-The cobbler is set with you give it a shuffle.
-A toothpick inserted into the batter comes out with moist crumbs.
-If you peek inside the batter with the tip of a knife, the cobbler looks fluffy and airy.
Remove the cobbler from the oven. If using the bourbon, drizzle it all over the hot cobbler and let it rest for at least 20 minutes. Scoop servings into bowls and top with something cool and creamy, such as Vanilla Buttermilk Ice Cream. Serve warm or at room temperature.The cobbler will keep at room temperature for several hours, and refrigerated for up to 3 days. Re-warm before serving. (Don’t store it in a cast-iron skillet as it may pick up flavors from the pan and/or remove the seasoning.) 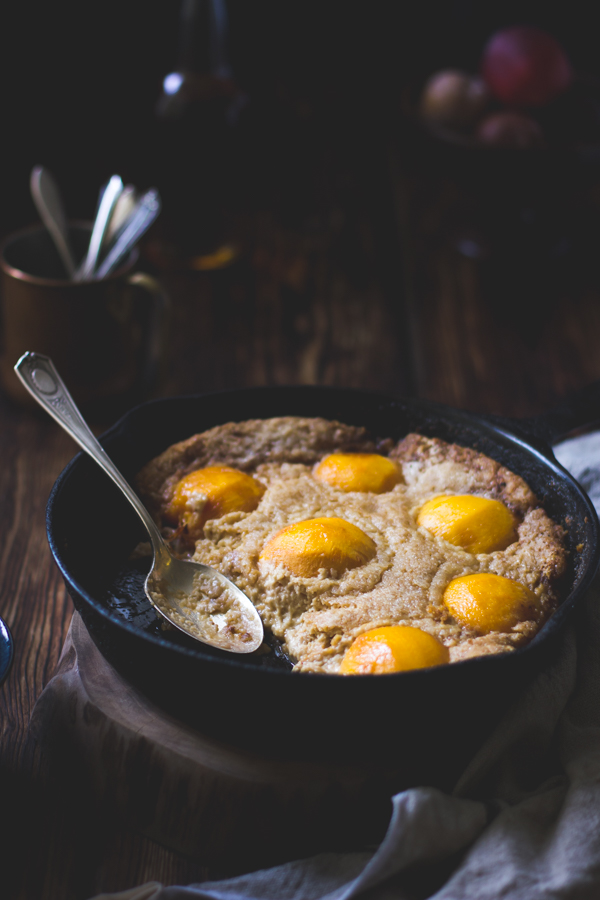 For more on Food that I’m ADDICTED to online, visit: 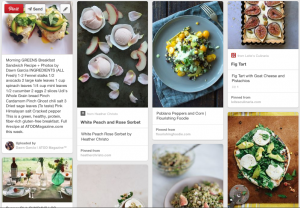