Much like his name, Louis Carreon has the soul of someone who carries on and lives every waking moment of his life. His work exudes the heartbeat of truth with the absence of omission. It is both essential to contemporary art and a foundation for emerging styles. A cross between street art and Miro, there is an honesty that bleeds through the drippings of each piece. When I arrived at the Mondrian Hotel entering through the Skybar entrance, Louis was there to say hello. Dressed in a white tee, black pants, black shades and a dark grey knit hat, he was cooly calm with a tinge of nerves … and I immediately became a fan. His work isn’t something you can summarize in a quick sentence. It’s second nature to him and in turn, whatever he’s feeling, whatever he’s passionate about – whatever comes to the surface, well it comes through in his art. This reveal of “FACES” is a look at an unharnessed truth that showcases itself without any barriers. With subtleties like, “I’m Sorry”, “I Won’t Be the One You -“, and “1-800-666-LUST” painted ever so coyly in the paintings on the wall, the things that climb through his thoughts and into his work makes it more than approachable, it makes it rather poignant in a world of art that sometimes drowns itself out by trying too hard to be something it isn’t. 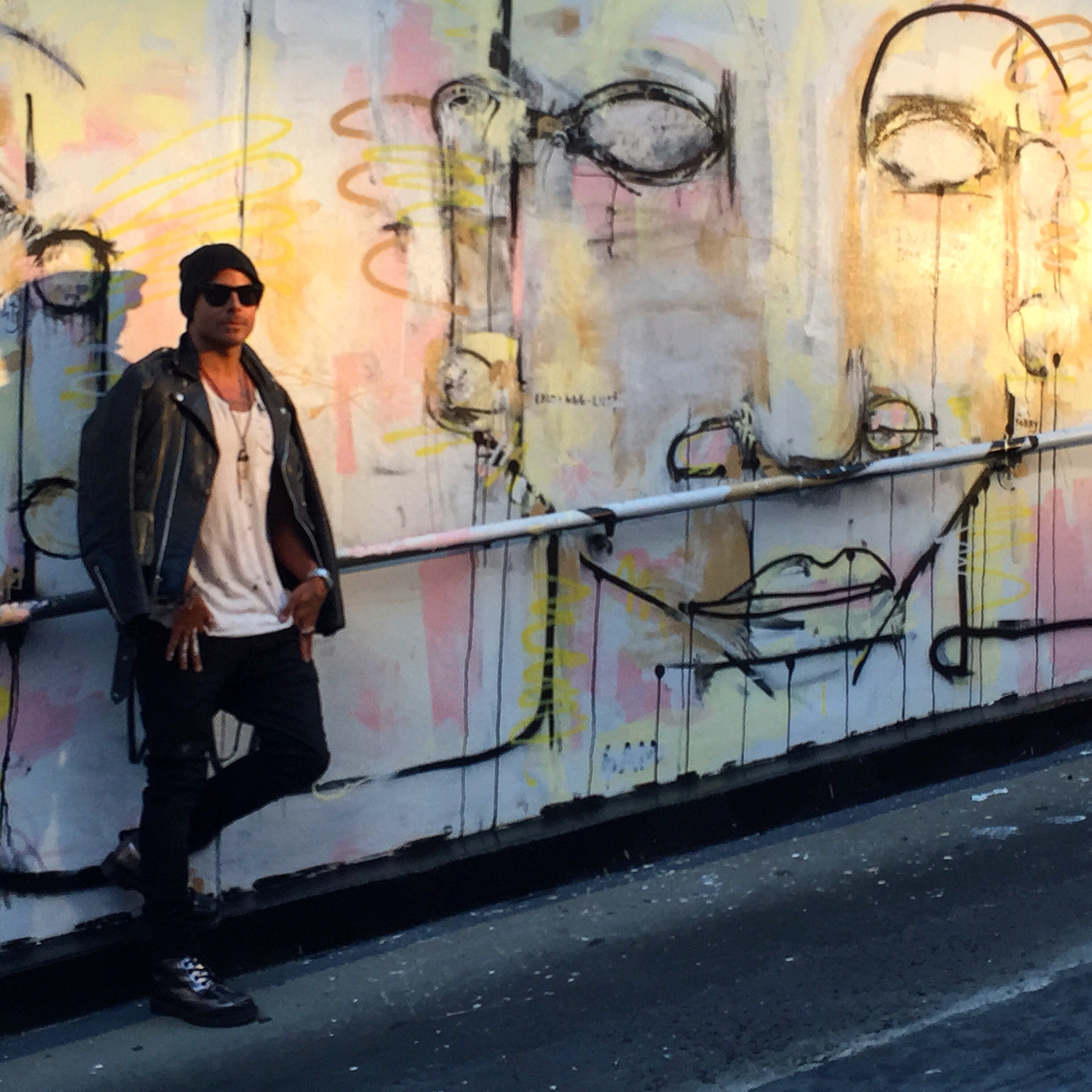 Carreon isn’t someone “trying to be an artist”. He just is. He oozes it from his paint stained hands to his decadent smile. With a quick witted sense of humor, the man behind the art is the real deal. Not in theory and not in jest. What he creates to become his oxygen. And the most elating part? He isn’t going anywhere. His creations are reminiscent of something desperately lacking in so much of the emerging art world: a little dose of candid rawness, a whole lot of transparency, and a complete conviction that art is merely his primary language.

I will be sharing my interview with this Los Angeles Artist very soon but on this particular evening, this unveiling, his work did something for me that hasn’t happened in a very, very long while: He inspired me to write. And I did. Below is what his work inspired. But regardless, should you find yourself in your car desperate for something to do, I encourage you to make your way over to the Mondrian Hotel on Sunset Boulevard and truly appreciate the depth of what Carreon creates.

For me, it just comes out. I just start painting and the result is whatever ends up on the wall or the canvas.

Thank you Louis for inspiring me … and for being uninhibited.

Currently, Louis is working on a coffee table book that will feature Painting, Photos, Poems from prison, and Short Stories of his past set to be out later this year. 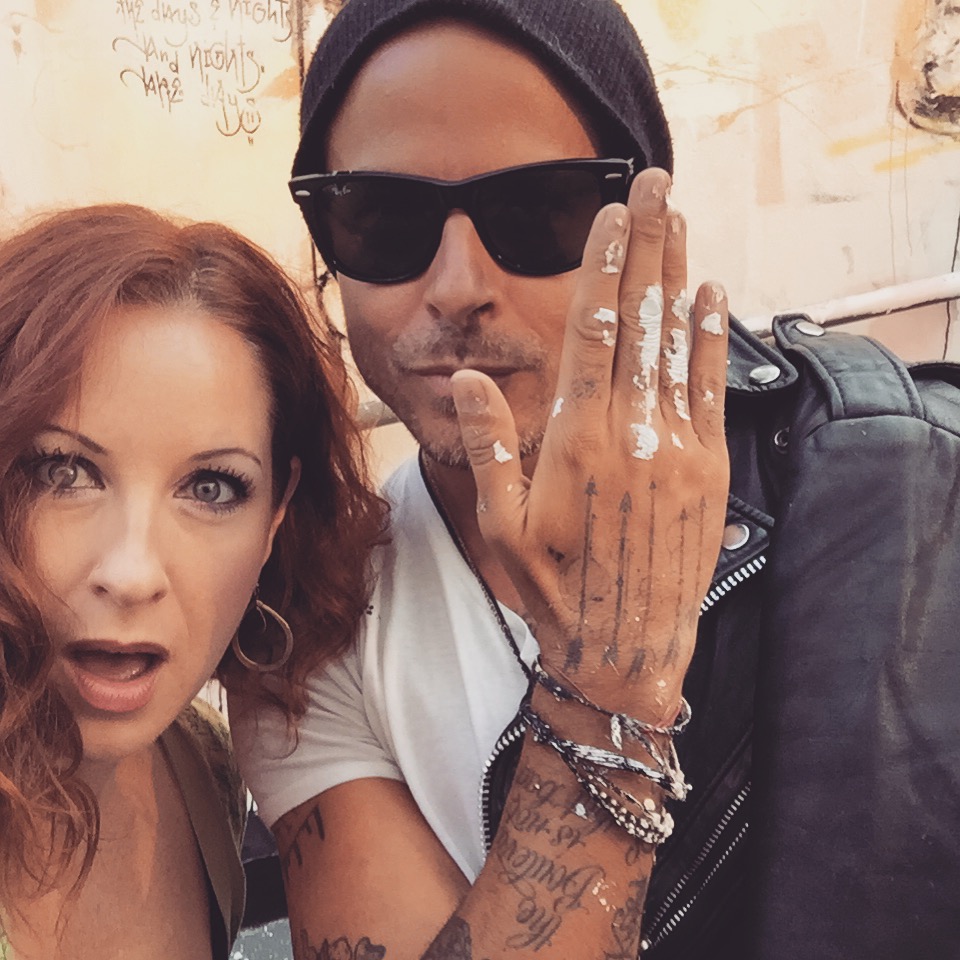 Observation Piece by Dawn Garcia, Inspired by the works of Louis Carreon

The ARTIST | An artist in their height of pivotal reveal still has that beautiful and wonderful nervousness that permeates through those confident eyes and jagged smile and for a moment, his soul is bleeding out behind the shelter of his shades. The people here to look, hoping to understand and perhaps they do. But – in a wakeful sleep, blissfully unaware of the emotional truth that drips in a single stroke of his brush – they long … for something. But in the eyes of the faces he has openly created exists an honesty and hollow hope for more. A wall transformed with hours of second nature. And I sit. And watch. In wonder … because in our vacant moments, we all bleed out and we do so with something seemingly unfounded.

And yet – our heartbeat illuminates without hesitation and everything we pretend to know swarms just overhead until the only thing left to face is the cadence that dances in those dark corners of who we are. 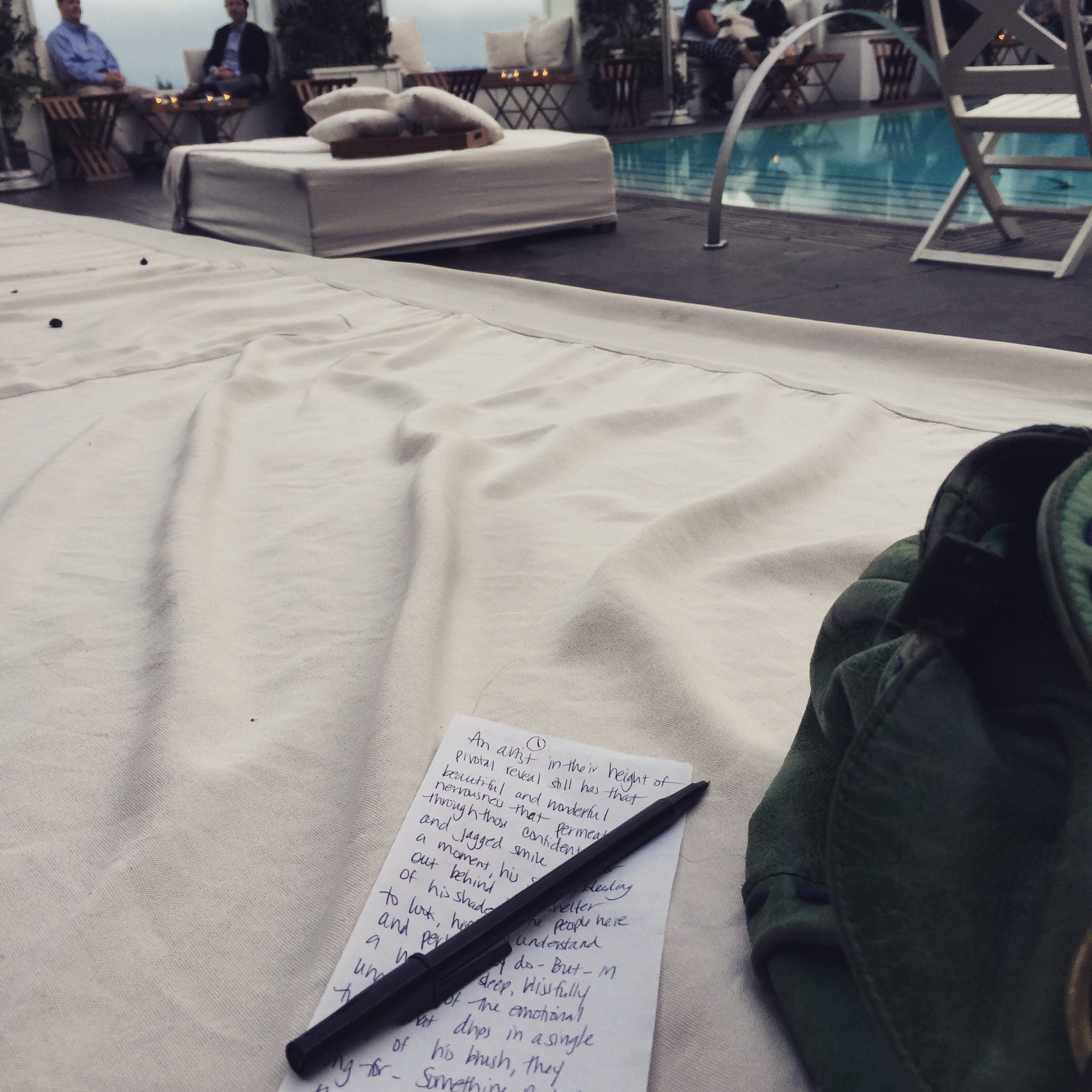 The CROWD | The night Hollywood air blows with effortlessness {one assumes}. Eager bodies situated on the mattresses strewn across this tinsle-town Freudian contradiction, while others wander uncertain of where to place their languid flesh – lonely – but somehow secretly, spotlight thieves at heart and while there is a vacancy to the dance, I can’t help but indulge. Something is so tragically unnerving and hauntingly exciting in those who look in in curious wonder. They scan the room hoping to get a glimpse of someone famous, and really, at this point, they can’t tell …

Their minds race because those faces seem so familiar … but why? This is the dance that LA knows best. A hungry little beast starving for attention and in this town, well, sometimes it feeds the insatiable. My pen scurrying across this long strand of receipt paper I begged to have from the angel behind the bar with his shiny bald head wearing glasses across his perfectly shaped nose. His smile is everything good about this town: honest and helpful – and hopeful.

I seem to have stirred some curiosity as I sit, stuffed in a black dress writing away on the priceless little mattress I claim as my own. The makeshift outdoor bed weighing down on this wooden planked playground for every LA dreamer and every lonely studio head. Two men scour the room while talking about world travels. The “travel” men stop on me and stare: the busty redhead now writing notes like a tabloid journalist having absolutely no idea that the writer in me has merely drifting into creative bliss. Maybe they don’t see me. Perhaps tonight, I’m invisible. I see a girl with long black hair dusting the exposed part of her back talking to her friends who seem to disinterest her. She catches a glimpse of me writing and smiles. Maybe I’m not quite so stealthy. A beautiful reminder that we are not simply shadows lurking in the busied corners of this place. We are souls drifting into one another without intention. All looking about. All lost in the echoes of conversation, the bellowing drunken laughs, the people all staged here as if an “Entourage” shoot is about to film. Faces all filling this space. The things we see! Insecurity gleaming on a gorgeous blonde’s face.  An overly cocky, prestigiously confident Oxford man with his hands pressed against his tailored pockets in discomfort. Aren’t we all our own wonderful contradictions?

The MAGIC: I’m not entirely convinced this entire place isn’t some sort of magical façade, engaging every wakeful person in here to find something extraordinary in the simplest of things. Tonight, it was art and as my writing adventure seems to be drifting into the crowd, this dulling moment is perfectly halted when a photographers stops and asks me what I’m writing. I simply say, “I was inspired by an artist and couldn’t help myself”. We are all characters in someone’s story and tonight, they are characters in mine. I can’t help it. Life is it’s own unraveling cinematic scope and there is something rather extraordinary about that. Perhaps a tangent in this wonderful scene unfolding was exactly what I needed. And after a brief interlude with the stranger behind the lens, my desire to be home takes hold of me and the pen, so bold and fragile knows … its time to go.

A Little Staycation in WeHo 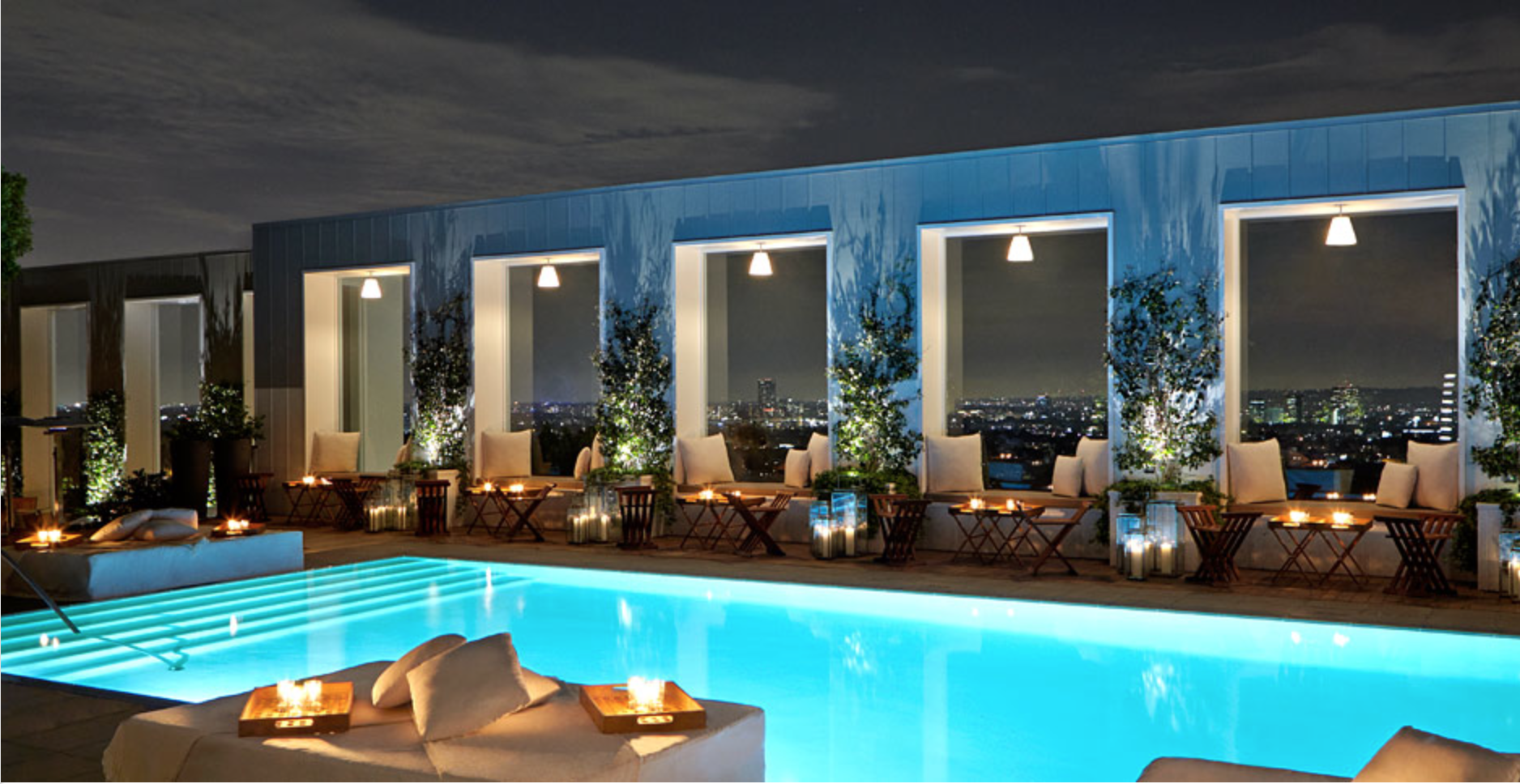 In the wake of the ongoing limitations…