Art is the silent, still thing that sits on a wall for millions of strangers to stare upon. But when art becomes your voice because it can silence the fears swarming inside of you like an infestation, it no longer is a thing. It becomes the living, breathing re-creation of emotion that is essential to simple existence. An existence void of a world fraught with hateful behavior and ugly words. Art is not merely restitution for ones soul, it is the courage we need to cry, to laugh, to close our eyes and feel the brush of flesh against our backs. Art is liberation. And an invitation to find that the things we hope to hide within. Art extends its hand to let you know that you are not, even in the mildest of ways, alone.

But I know that there are plenty of people who call themselves Artists who have no understanding of the true nature of being willing to bleed out to share an emotion. There are those that cannot push themselves to be among the finite few that create simply because there is no other form of freedom. In the opposing sentiment, I also understand that there are plenty of able bodies who dare call themselves art savants whose elitist snobbery stands in the way of them being completely saturated by a piece of art, let alone being enthralled by the hands that created it.

These are the moments when we must ask: What IS Art?

Tonight I watched a movie, “The Women In Gold”. A true story about Maria Altmann, an octogenarian Jewish refugee, who boldly takes on the Austrian government to recover the Klimt painting, “Adele” (aka The Woman In Gold on permanent exhibition at NYC Neue Gallery) that was stolen by the Nazis in 1941 and never returned to her family. The painting was of her Aunt, Adele Bloch-Bauer. The story centers around a painting but the heart of it lies with just what art means in a world that refuses to understand its importance. With schools doing away with art programs by the thousands, I believe we are making a grave mistake. Art is the only pure thing left in our world.

Our future of humanity depends on our ability to see the romance and truth, the joy and hope, the ugliness and violent nature that exists in every form of art. But something about a canvas painted with something as primitive as paint and as humbly by a willing hand, well, that’s our saving grace. Unlike words that pour from us with consciousness of grammar, political correctness, or a lack of abandon, ART has no words; No notes that must be written, nor calculations that must be measured. Much like the way we saw the world as a child, a canvas holds our future as an unobstructed mirror of all we have that separates from the animals, all staring back at us.

I remember the first painting that took me over. I was in Chicago and I saw the Stained Glass exhibition of Marc Chagall. Intricate, painted pieces of glass that individually seemed nice but honestly, perhaps unimportant, until they are pieced together. Pieced together they become ardent in the potential of finding beauty when it seems there is none. The colors he uses knowing they were done at a time of such change, the brightness and dismal, contradicting joy literally took my breath away. The second painting that personally spoke to me was Van Gogh’s, “Garden of the Poets”. I was at LACMA, a museum that has been dear to me since I was old enough to go on my own. It was a rare Van Gogh exhibition where paintings from Brussels were on loan for a limited time. The premise of the exhibition was unique because each painting incorporated letters between Vincent and his brother, Theo. In Arles, there was the known Yellow House. A house rented by Vincent where he would go to paint. He would invite artists to come together, among which was Paul Gaughin. An artist Van Gogh was rather taken with and so before Paul would arrive at the Yellow House, Vincent had painted several paintings to adorn his room in hopes he would be inspired to create. One of the most memorable of that series was “Garden of the Poets”. Knowing that the painting was done out of passion and a mere desire to inspire a fellow artist, well, it struck me. It reminded me that artists are only as good as their ability to embody art. We all need each other. I’d encourage you to look into the story, it’s rather alluring … And, ironically, it now calls the Art Institute of Chicago it’s home. 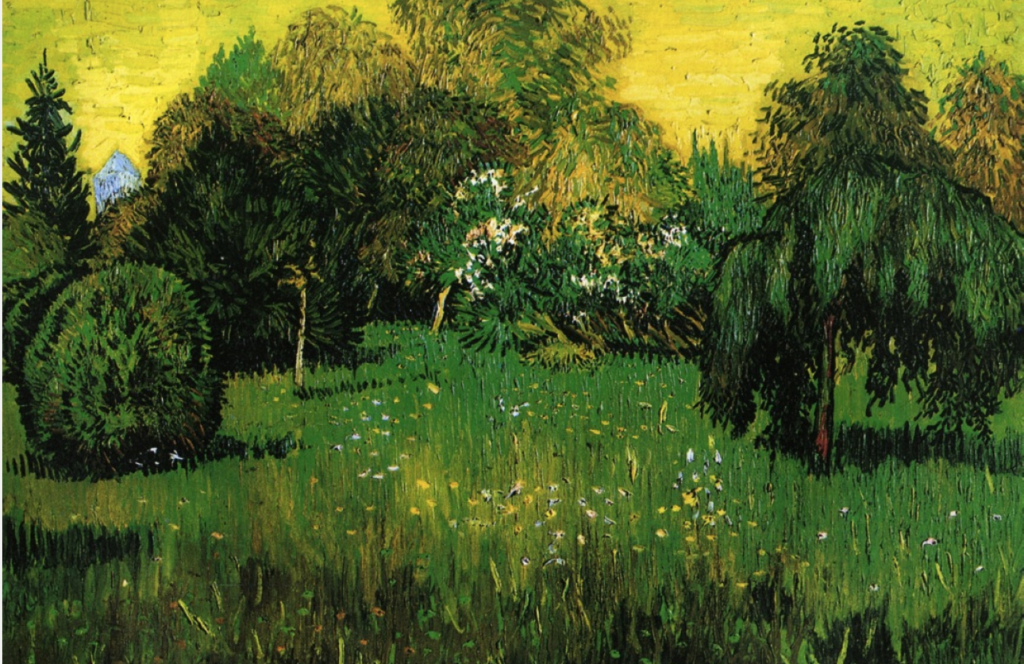 I know I’m tragically romantic and I try to see the beauty and good in everything if I can. I know I am heartbroken when people disappoint me or people show disrespect. I am genuinely injured when people behave unkindly because in truth, I will never understand it. We all have our moments but the selfishness and arrogance of so many is beneath us all. The remedy for that? ART, and I hope and pray that museums never become hostile houses for art that has been neglected or made to seem so unnaturally fantastic that their purpose is drowned out by imposed ideals.

Art is not a sordid investment. It is our lifeline.

Each year I attend to LA Art…