WSWA is a gathering once a year where hundreds of wine and spirit makers come together to showcase their brands and give distributors, investors and media an opportunity to taste their particular line of liquor. With three days to explore a diverse range of everything from bourbons to wines to jello shots and mixers, you have your work cut out for you. While I’m a happy, equal opportunist in terms of alcohol, I am officially bored with the same old thing so finding something that awakens my palate and galvanizes my thirst is a priority.

So what am I looking for? I want to be surprised. Last year’s show introduced me to an array of spirits I hadn’t tried or even heard of before and while this year there were fewer of those, I did find myself wowed at least a handful of times. That said I’m looking for three things that give a brand an edge: 1) clever packaging and branding, 2) a story that tells a tale so compelling or emotional you can’t help but fall in love, 4) and most importantly, it has to taste amazing!

Below is a glimpse at two brands that took me on a tasting journey – and – make sure to check back for a list of more spirits that made an impact.

pairs well with: savory and sweet, on the rocks or straight 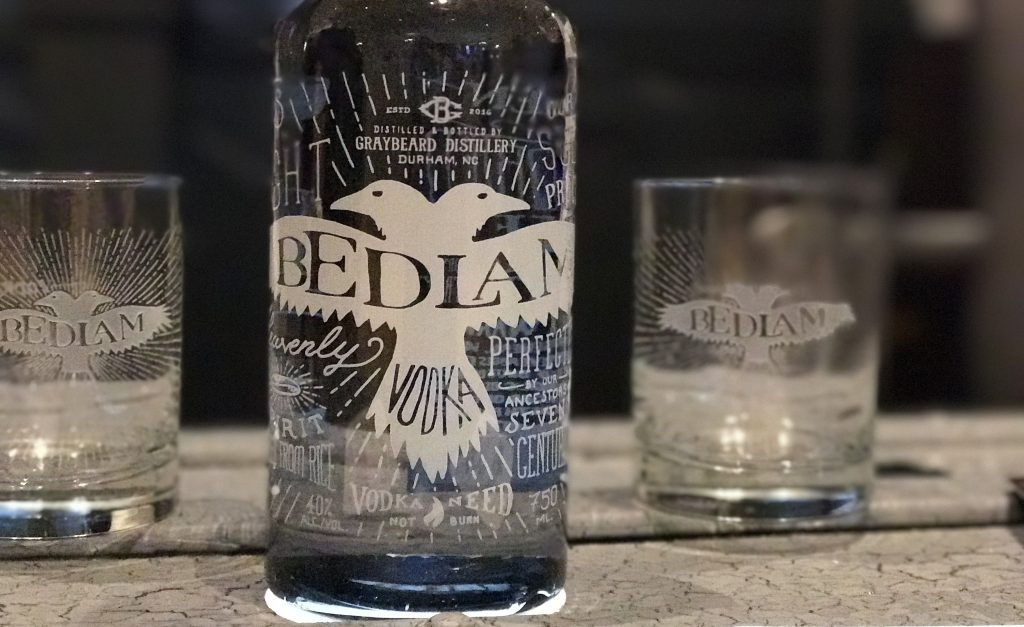 Bedlam Vodka is a name you may not have heard of yet but it’s going to be a name you’ll start hearing more of very soon. First off, admittedly I was never too excited about vodka. Sure its great for mixing but I wouldn’t say I stay home and wind down sipping any brand of vodka. BUT that’s because there hasn’t been a brand that really aroused my tastebuds enough to make me commit. Until now. At the urging of hearing someone rave about this thing called “Bedlam” at the WSWA show, I had to see what the fuss was all about. The minute I arrived I knew – if nothing else – they had their branding down. A bar set up to the left of their own grey wooden built “set” with their insignia logo dead center, chairs, a table on which a bottle and their genius tumbler glasses are staged, as music seeps out subtly and you see a team of people who look like they’re your dearest friends – they’re easy going and very familiar. Each person wearing a black shirt with that logo you’ll love immediately, there is an ease to them that invites you to want to hear their story and of course, taste what they’re serving up.

Scott Russ (COO + Head Distiller) , Brandon Evans (CEO) and Samuel Searcy (CCO) smile and settle in as they  pour me a shot and Scott proceeds to tell me the story of how Bedlam came to be. The smells that escape the cup remind me of fresh bloomed flowers, herbs and sake. It’s refreshing and subtly sweet all at once and it’s beautiful.  Scott begins the tale of how his grandfather, in a stroke of genius, realized there was a way around the laws responsible for making distilling so dang taxable! Imagine if you will, generations ago, distillers in Ireland utilizing corn and wheat and rye for whiskeys, bourbons, and more. Each grain was heavily taxed and regulated except for one grain that was filtering through, unnoticed, without anyone paying any mind. Rice! So, nearly 200 years ago, as the story goes, the Russ’, Barnard’s and Callahan’s made life far more intoxicating for the people of the region by deciding to smarten up and use this tax-free grain to make something no one was drinking: Rice based vodka. Chances are it was also pretty high proof! So, in true homage to his grandfather, Scott Russ ditched his legal career and decided to try his hand at bringing back this family spirit.

Intrigued by the tale, the adventurous drinker in me has to taste this newfound vodka. Sam pours me a drink, I sit down on the chairs with Scott and I take a sip while he continues to share the history behind this unique vodka. I pause after sipping: WOW! As you let it sit on your tongue and reach the roof of your mouth, sweet notes tend to burst in a cadence of flavor and then, that slight savory dance of florals and rice grain take over. Its unlike any other vodka I’ve ever tasted and at 40% alcohol with packaging that distinguishes itself from any other brand, its going to change the way people view vodka on the whole. I’m not the only one who thinks so. In fact at the Brand Battle, one sip in and the panel of judges were sold. There in search of a brand that changes the game and causes industry disruption, they all agreed this was the winning label. Bedlam won the Media Award for Hot New Brand in North America, they took first place in the Brand Battle, and took silver in Vodka.

Based in Durham, North Carolina, they are rolling out their official “Launch” in May of this year. Be sure to follow them on Instagram and visit their site to find out just where you can place your lips on a glass filled with this beautiful bodied vodka. Oh and the price point? $21.95 USD! 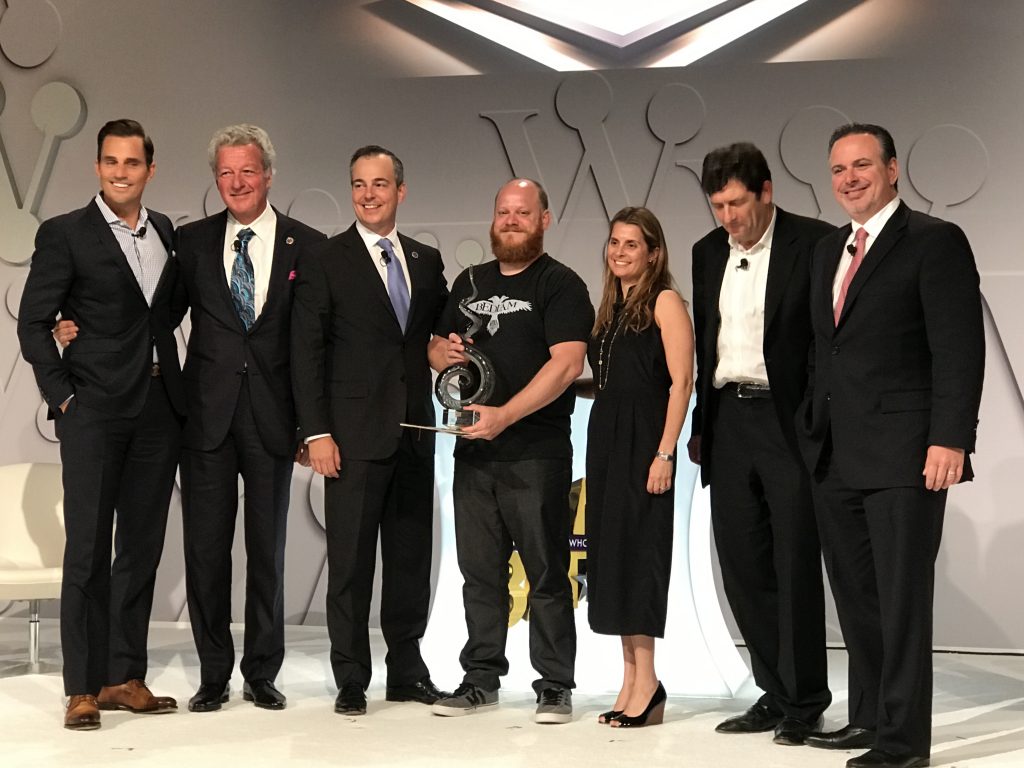 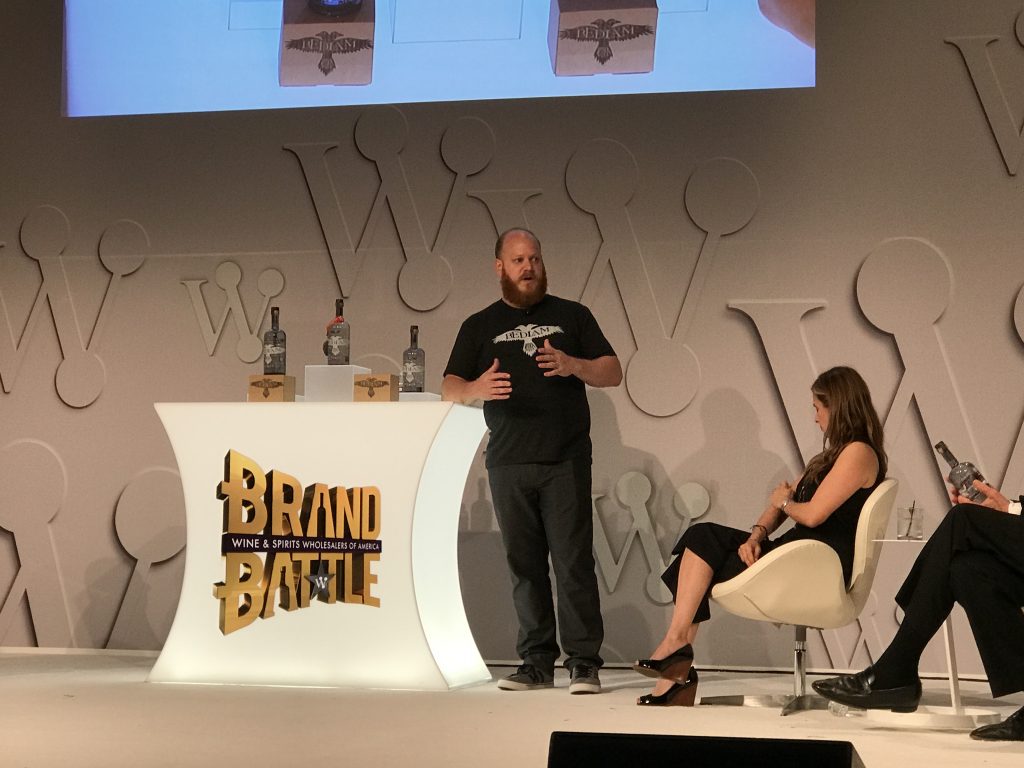 crema tasting notes: chocolate, nutty, could easily be used in place of a Bailey’s 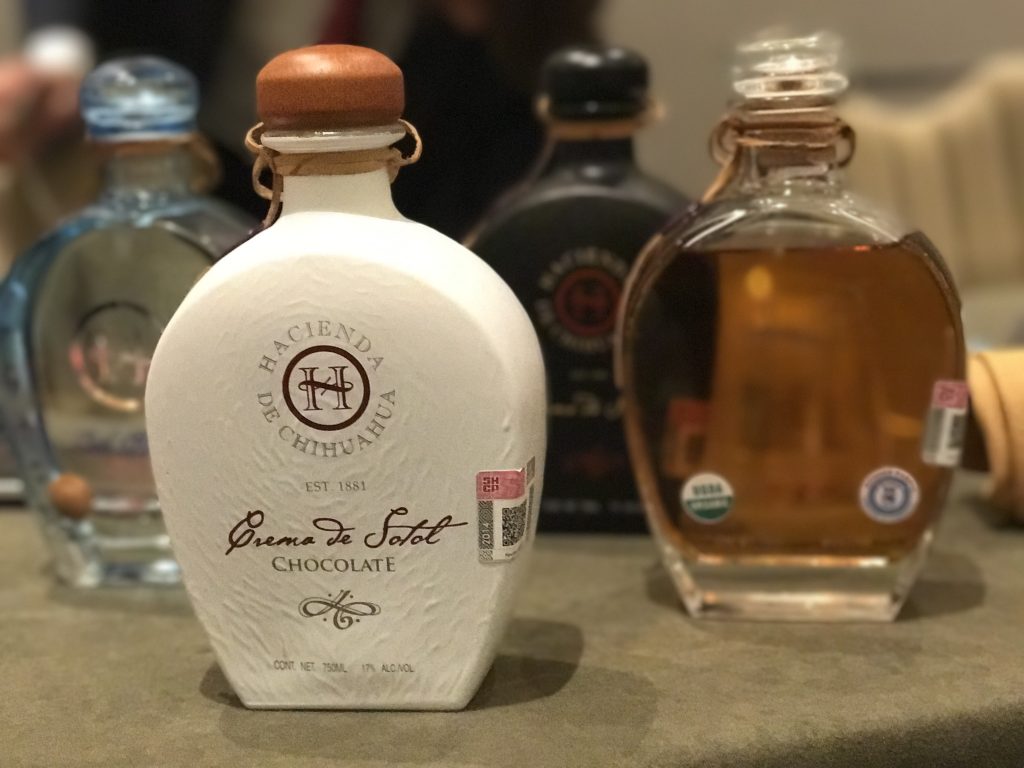 In the region of Chihuahua, Mexico is a beautiful wealth of tradition, culture and incredible terrain. It also happens to be the home of the “best kept secret in Mexico”! A secret dating back 800 years, reserved for the hacendados and distinguished guests. The secret is Sotol. Sotol is something connoisseurs that love tequila find themselves over the moon for and while at WSWA, the secret found its way to me.

As I wandered through the convention, I visited a hospitality suite that was housed with an array of different brands from Mexico, Italy, Ireland, Scotland, Russia, Argentina and Spain. As I entered I struck up a conversation with Enrique Elias Valdés from Haceienda de Chihuahua. As we talked, I began to notice the bottles of Sotol but not before Enrique begins to pour the Sotol Ultra Premium Crema into a small cup. The smell of chocolate and pecan drift my way and as I bring it to my mouth to take a sip, it is easily one of the better sweet liqueurs I’ve tasted. Something about it’s range of flavors make this the perfect addition (or replacement) in a White Russian or an Irish coffee. Made from the agave plant, there is something very distinct about this spirit line.

So what exactly is sotol? It is an organic agavacea, wild-harvested in the Chihuahuan Desert of Northern Mexico which takes 15 years to mature. Hand distilled by José Daumas Gil de Partearroyo “Pepe”, the in-house master distiller, who received his Masters degree in enology at the world renowned École Nationale Supérieure Agronomique de Montpellier, France, his résumé includes a plethora of well-respected brands such as Martell, Larsen, Möet and the like. He is the quintessential embodiment of what it means to make a hand crafted spirit. He oversees every single step of the process and doesn’t let quality slip by. The story of the sotol is beautiful and the devotion to crafting something exquisite is admirable. Considering one of these agave plants yields a single bottle of the platinum, you can’t help but revel in the heart and devotion it takes to make this delectable spirit.

Next, it’s time to taste the Sotol Platinum. As I taste it, I am hooked. Its cleaner and smoother than any other tequila I’ve had. Enrique proceeds to tell me more of the story and how each time they move to a harvest a new plot of plants in Chihuahua, they reach out to the locals and offer them jobs to help with the distilling and picking process. They believe in giving back and I swear you can taste it in every one of these spirits. They also continue to replant so they never leave an area depleted. And just as I think I can’t like this product more, Enrique shows me their bottles. Every bottle is absent a plastic wrap and instead has two leather straps that move over the lid to keep it closed and ensure no leakage. Holding the bottle, you can turn it upside down and watch as a tiny opening in the lid fills with just shy of one ounce of whatever is being poured. It’s a brilliant packaging design and an undeniable technique.

The Hacienda Tabalaopa, a family jewel since it’s establishment in 1881, has historically embraced Sotol as the spirit of the region. Vinomex is leading a new generation of Mexican spirits … The beauty of it is? It’s affordable! The range is $30-$150 . Available in the US, Canada, Europe, Chile and China. Visit them online to find a store near you.www.Vinomex.com.mx | @sotolhacienda | #SotolChihuahua 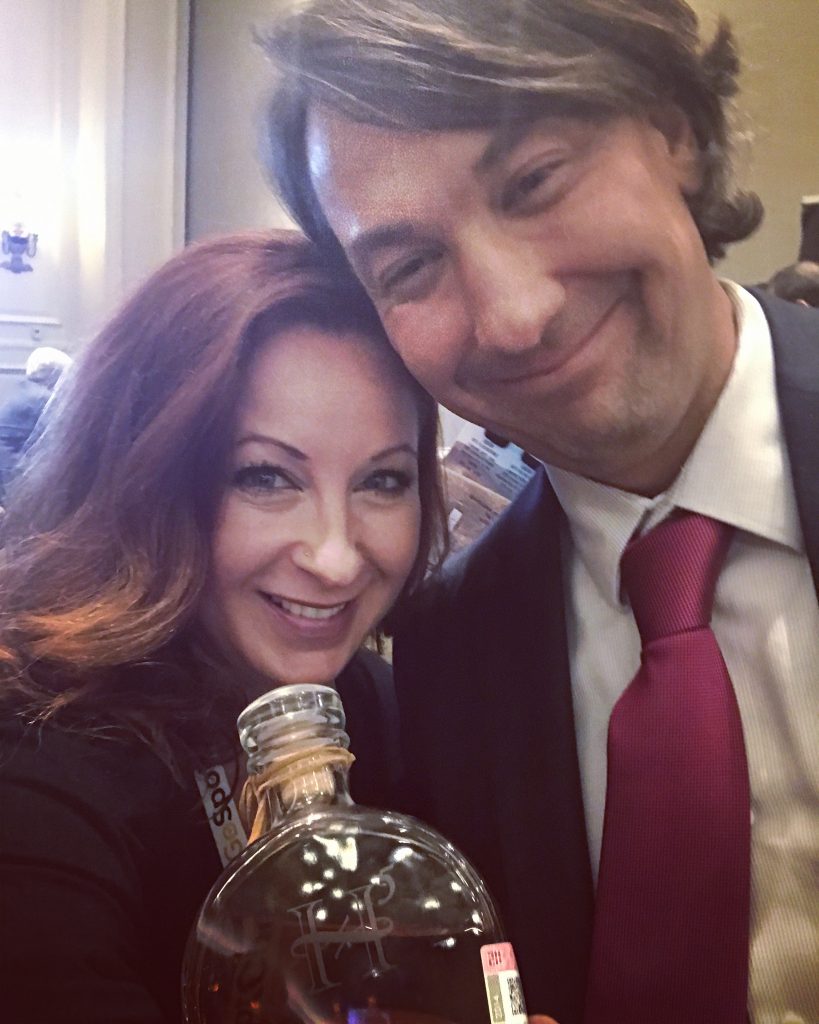 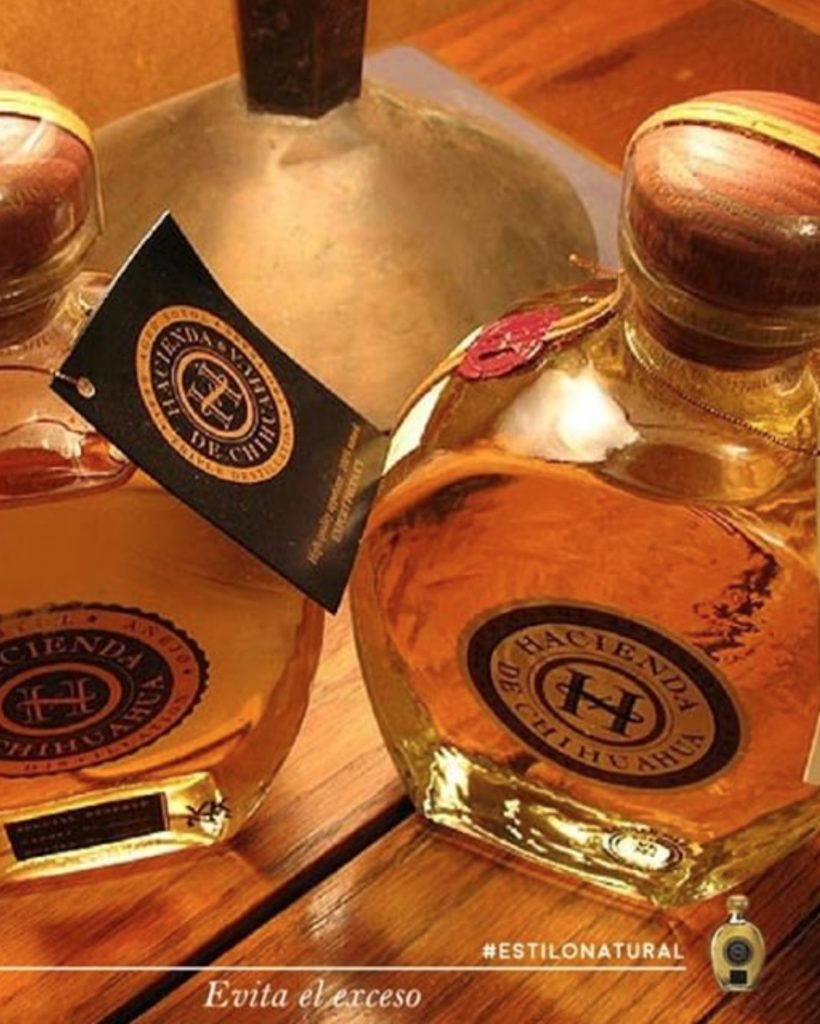 Stay tuned for more brands I found while discovering and tasting at WSWA this year in Grande Lakes Orlando, Florida at the gorgeous Ritz Carlton and J.W. Marriott.

Southside With You a love story for…