A Conversation of Hollywood, Equality, and Creativity

This week in the peak of yet another warm day in Los Angeles, I took my ten year-old daughter out on a mommy/daughter date night to be a part of something that I hope will resonate with her always. Beginning with a lovely dinner, we arrived in Beverly Hills in anticipation of Pacific Standard Time: LA/LA’s partnership with The Academy of Motion Pictures, Arts & Sciences’ Samuel Goldwyn Theatre for their Monday night screening series. Tonight we would be watching “Real Women Have Curves” with a panel discussion to follow with actress America Ferrera, Writer/Playwright Josefina López, Producer Effie T. Brown, Actresses Ingrid Oliu and Soledad St. Hilaire.

The conversation began with writer/playwright Josefina López. Asked what inspired this screenplay that she wrote and the young age of nineteen:

JOSEFINA LÓPEZ: I was told by an acting teacher, you’ll never make it in Hollywood because you aren’t white or thin enough. I remember crying and crying thinking I wasn’t beautiful and then my teacher started to cry and said she was told the same thing once and she wasn’t saying it to hurt me but it was just the way the business works. I guess the men want to play all the heroes in the story and so I guess the women have to be thin enough for them to be lifted up in their arms to walk into the sunset because men are meant to be the heroes in all the stories. And when she said that, I remember I tried to lose weight for like two weeks, I did. I took her advice, I was like eighteen years old and then at some point I got really angry and I thought you know what? First they’ll tell me that I have to lose weight, then they’ll tell me to change name because it sounds so Mexican, and then they’ll tell me to change my hair color, and then they’ll tell me why don’t you stop talking so much about the fact that you were undocumented, and at some point I had to ask: do I have to give up everything I am to be an actor? If I do then there’s nothing left of me. So instead of me saying I should change, I said, fuck you society, you should change!

At that moment, the crowd erupted in applause because at some point, the dialogue has to change. 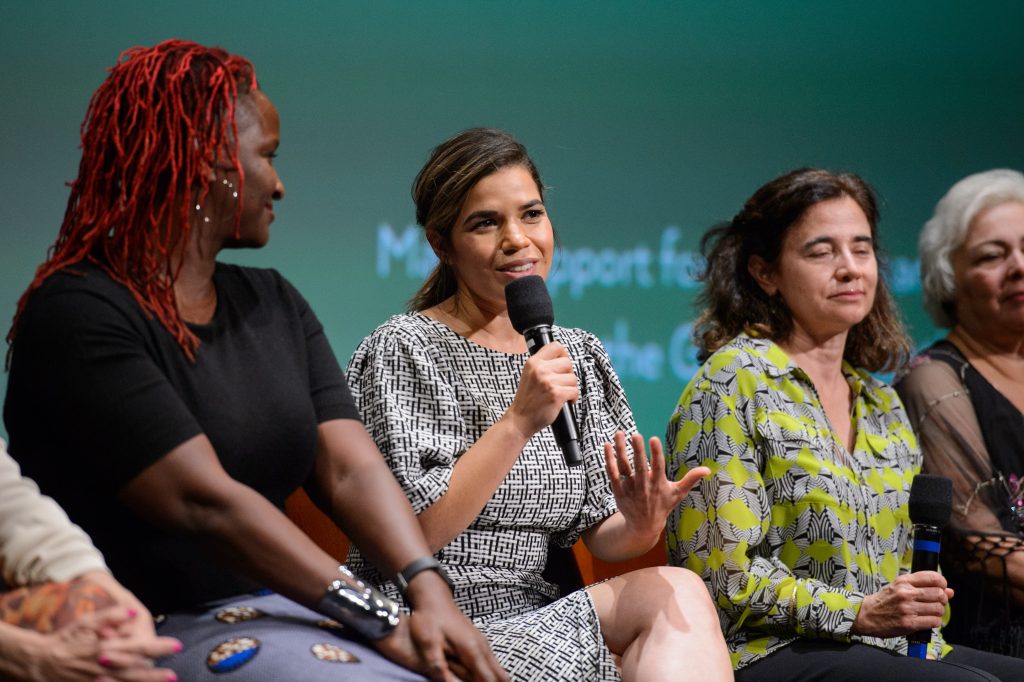 AMERICA FERRERA (In what ways the film impacted her life and career): That is a really big question and in short, in all the ways. I could have never known that at 17, being 1 of 6 children to a single mother with weeks where we wouldn’t have warm running water or running water at all, or electricity, having this dream of being an actress coming from where I came from – my own family, my friends, my teachers, people would say it was very unlikely. With the naiveté of a young person, I believed it. Even in the moment of getting this role and knowing how special it was, I could never have understood then the way I do now what an anomaly this film was and the fact that I had been in the right place at the right time at the right age. To get to take on this role, this film – it set the bar for me.

I remember traveling the world with this film and people of all ages, all ethnicities, male, female, you name, coming up to me saying, “that’s me, I’m that girl”. For that to be my first experience with acting, with film, to realize it wasn’t just about being an actress and getting to make movies but telling stories that reflected peoples lives back at them?  It changed everything for me and it made me realize that I could have a career that meant something more than myself, my own dreams, and my own aspirations. It is hard to realize how little has changed and how little has happened for Latino women in film or just people of color since this film and the way that it was received.

But I think what keeps me going and a lot of the women and people of color I know going is that if we don’t break down the doors that we can break down then we are not doing justice to the people coming behind us.

EFFIE BROWN: Maude Nadler had a real talent for putting together modern dysfuntional functional families and this was the second movie I had ever produced and it was real and it was hard and it was lovely. America was the first actress we auditioned but we continued to audition because we couldn’t believe we found the right person at the first casting. Those are the stories that really move me. The scene (where the women strip down) was a monumental scene, a monumental moment. It still is. 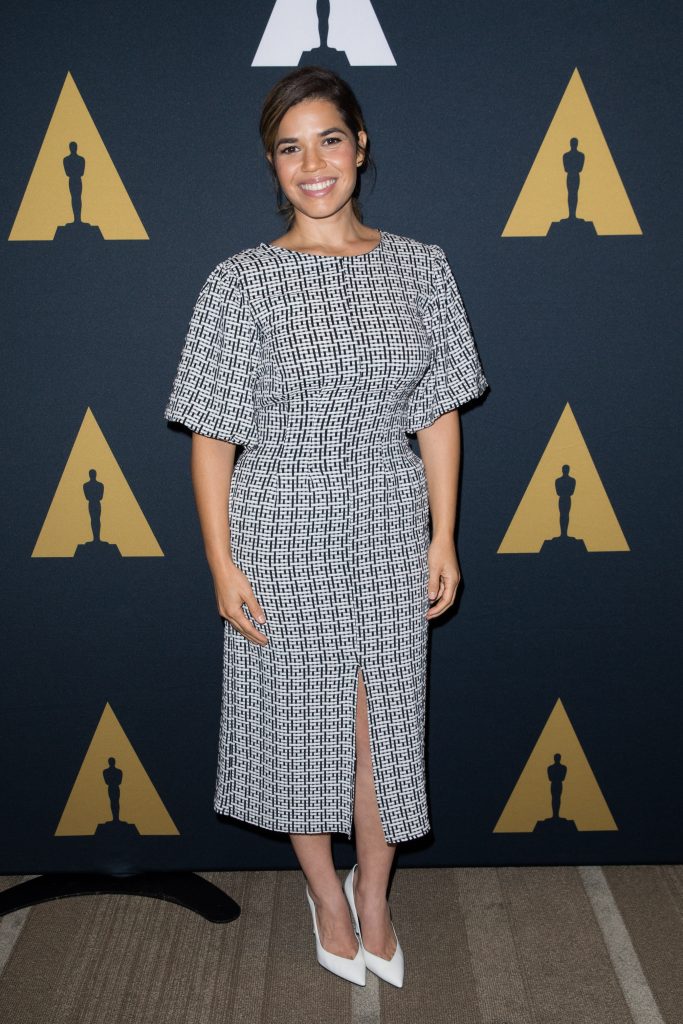 Actor America Ferrera (left) prior to a screening of “Real Women Have Curves” presented by the Academy of Motion Picture Arts and Sciences as part of Pacific Standard Time: LA/LA, on Monday, October 16, 2017. 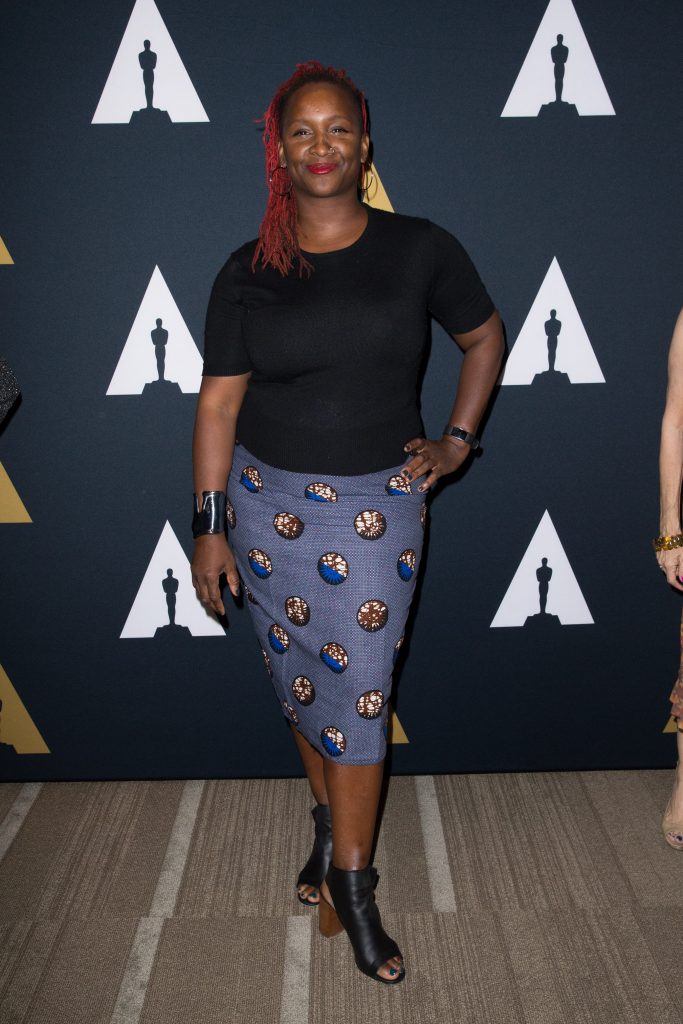 Producer Effie Brown prior to a screening of “Real Women Have Curves” presented by the Academy of Motion Picture Arts and Sciences as part of Pacific Standard Time: LA/LA, on Monday, October 16, 2017.

To know what these women have accomplished, to see their impact on storytelling from screenwriting to producing to acting, it’s pivotal in the continual shift of women of color and women in general, speaking out, coming together, and creating a platform that can no longer be ignored. This particular event was close to my heart. Growing up in Los Angeles, I was told I could do anything by my mother but then reminded by men, some family, and classmates that being “creative” was “cute, not reality based”. At the same time I was contradicted by being told I shouldn’t be too “feminine” or “sexy” or worse, told I was “overqualified” or “too strong”.

In light of the recent news about Harvey Weinstein’s deplorable acts against women in this business, this film was more poignant than ever and as we celebrate my culture and the culture of every Latin American woman out there, it’s high time we band together. With the constant microscope of the “business” stressing an unidealistic physical version of what we’re supposed to look like and weigh as women, I think it’s safe to say we are fed up. This film exemplifies the brutal beating down of a woman’s self esteem by family, culture, society and a total disregard for what actually matters: who we are and what contribution we’re making to the world.

While we all find our way through current events that are shedding light on a continual societal breakdown, may we never forget that women are not a sub-species. We are smart, loving, nurturing human beings and we have a voice – a voice that cannot be silenced, with talent that will no longer be blinded by doubt, with tenacity that no longer takes a back seat to mindsets that are outdated and degrading. We are a collective whole and we deserve to feel beautiful, be mothers, be lovers, be executives, be artists, and be – equal.

As a woman that writes screenplays, teleplays, books and has a magazine focused on bringing the world together, as a mother that loves and protects the beautiful notion of a daughter that sees the potential in everything, as a Latina that is proud of my heritage and the strides we’ve made, I say we take these opportunities – these films – these art movements – and we applaud their efforts and be instrumental in creating more projects that honor one another, push the conversation of what is happening in this nation, and be fearless when it comes to understanding one another.  Most importantly, may we learn that we are not the beings “behind” anyone. We are beside you. And we aren’t going anywhere …

To every woman, Latina, woman of color and girls discovering who you are, you are exquisite! You are beautiful – every dimple, every line, every bright smile. Never forget it.

A huge thank you to the Academy (who continues to improve, recognize diversity, and truly impact a new directive), Effie Brown (a producer whose spirit and kickass work ethic is essential), America Ferrera (who is a beacon of self awareness, talent, beauty, intellect, and perseverance), Josefina López (who has proven that you can always tell your story and tell it well) and a special thanks to the Getty. The Getty has made PST LA/LA possible and as a result, the course of dialogue is finally shifting …