CHICAGO – The City of Chicago’s award-winning Chicago Riverwalk, a 1.25-mile promenade through the heart of downtown, has quickly become one of the city’s most popular destinations for art, music, dining and the enjoyment of natural habitats, beloved by Chicagoans and visitors alike.  Replete with ample spaces for the appreciation of the city’s distinctive architecture, guests also encounter opportunities for boating, fishing, jogging and more as they traverse Chicago’s most beautiful waterway or bask in sunshine along the riverbank, savoring a tasty gelato or cool drink.
“The Chicago Riverwalk has helped transform the Chicago River into the city’s next great recreational frontier,” said Mayor Rahm Emanuel. “Today, the Chicago River brings people together, adds to our quality of life, and contributes to Chicago’s economic growth in a way that enhances, not endangers, our environment. It is great to see Chicagoans from every neighborhood, and people from every part of the world, enjoying the Riverwalk and experiencing the sights and sounds of Chicago.”

The Chicago Riverwalk is a prime example of the City’s official motto, “Urbs in Horto” (meaning “City in a Garden”), offering the serenity of nature amid the exciting vibrancy of an urban retail, business and arts hub.  The six-block Riverwalk was officially completed in 2016 under the leadership and vision of Mayor Emanuel to transform the Chicago River into a recreational destination and weave the life of the River into the urban fabric of the city. The beautifully designed promenade features a series of distinct settings, each aesthetically cohesive yet unique in character.  Beginning at the southwest corner of State Street and Wacker Drive, the Riverwalk moves southwest for six City blocks, divided into “rooms,” each partitioned by one of the City’s iconic movable bridges. These sections include:

The Riverwalk has transformed the Chicago River from a waterway previously utilized primarily by industrial barges or sightseeing boats into an approachable public amenity to be enjoyed by all.  The project also represents the realization of a key element of Daniel Burnham’s historic 1909 Plan of Chicago.  The design was created by Sasaki and Ross Barney Architects and was constructed by Alfred Benesch & Co. Engineers and Walsh Construction. 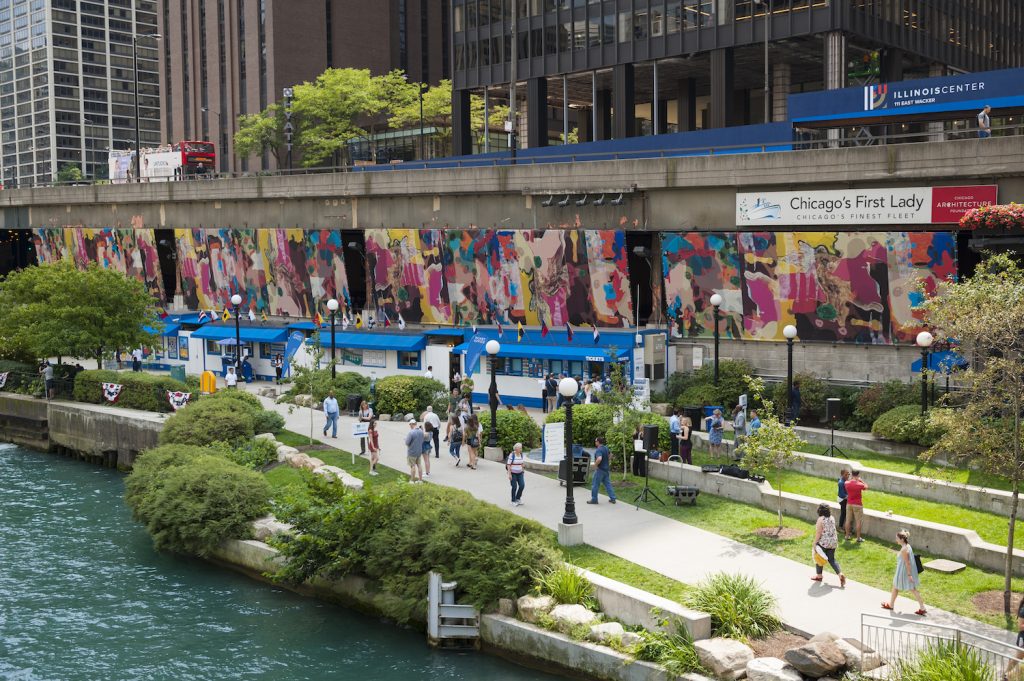 Dining and recreational opportunities abound along the banks of the Chicago River, including cafes, wine bars and craft brewing. Restaurants, many of which offer live musical entertainment, include Chicago BrewHouse, City Winery Chicago, Frost Gelato, Island Party Hut, The Northman Beer and Cider Garden, O’Briens and Tiny Tapp and Cafe. History and engineering enthusiasts will enjoy a visit to The McCormick Bridgehouse & Chicago River Museum, where they can learn about history of the River that helped establish Chicago as a business mecca and marvel at the technology involved in the movable bridges. Public art installations, changing seasonally, are peppered throughout the Chicago Riverwalk for sightseers to enjoy. Guided walking tours, let by the Chicago Architecture Foundation or Chicago Greeters, as well as birding tours led by Audubon are available. The Chicago Park District’s Fishing at the Getty program lends anglers free poles and lures.  For more information, visit www.chicagoriverwalk.us.

Those who wish to venture onto the water can book a tour from Chicago Architecture Foundation/Chicago’s First Lady Cruises-Mercury, Chicago Cycleboats, Chicago’s Skyline Cruiseline or Wendalla Sightseeing, or rent their own vehicle from Chicago Electric Boat Company or Urban Kayaks.  Those with their own boats can book hourly dockage on the main branch of the Chicago River at Downtown Docks, while Chicago Water Taxi shuttles commuters to West Loop train depots. 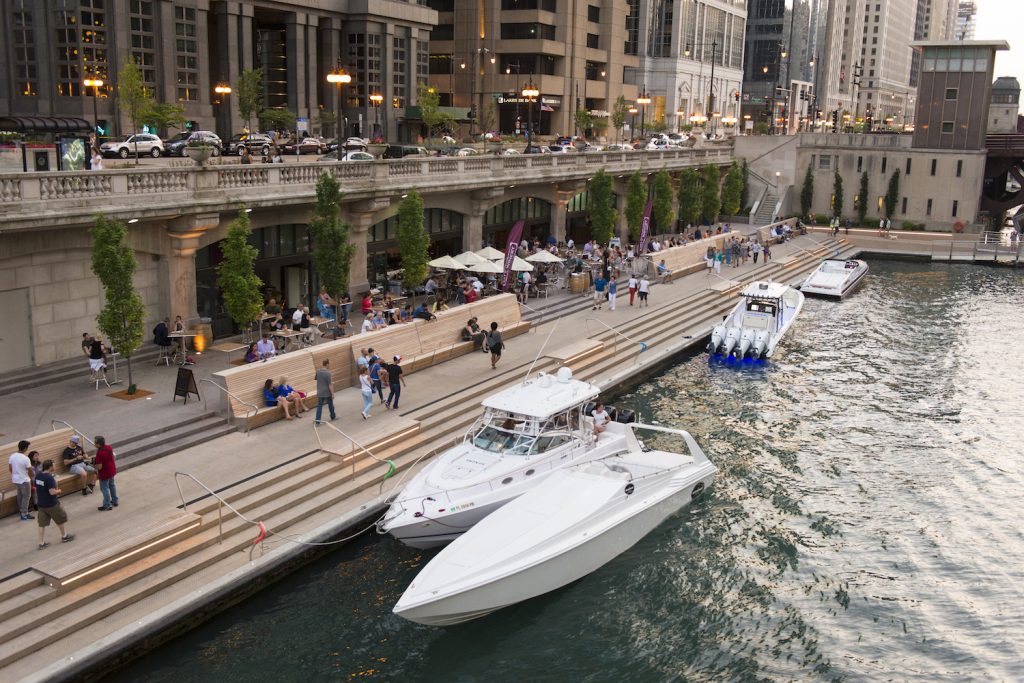 Riverwalk Marina in the summer with boats

Beginning this fall, the Chicago Riverwalk will become the prime location for the enjoyment of Art on theMART, a large-scale lighting installation projected across nearly three acres of the southern facing façade of theMART, the building formerly known as The Merchandise Mart.  The installation project, privately funded by Vornado Realty Trust, is part of the Terra Foundation for American Art’s Art Design Chicago initiative and will be implemented by Obscura Digital (www.obscuradigital.com) is the foremost design engineer of large projection installations.  Art on theMART marks the first time a projection of its size and scope will be completely dedicated to art projection with no branding, sponsorship credits or messaging allowed. It will be a curated, ongoing series of ever-changing installations beginning after dusk for pedestrians and residents to enjoy. The City and theMART will be working in partnership in the management and ongoing curation of the projected art work.  More details will be released at a future date.

The Riverwalk has been honored with more than 20 design awards including a 2018 American Institute of Architects’ Honor Award for Regional and Urban design, the profession’s highest recognition.  Critical reaction to the Chicago Riverwalk has been enthusiastic. Chicago Tribunearchitecture critic Blair Kamin wrote “the Riverwalk marks a significant step forward in achieving the ideal — voiced by Daley and adopted by Emanuel — of transforming the once-neglected downtown riverfront into a showcase public space that creates the equivalent of a second lakefront. Here, in bold strokes worthy of Daniel Burnham, Chicago is confirming and renewing its identity as a civilized metropolis.” James Stewart, writing for The Telegraph, wrote “this is a city that clearly enjoys its river. After 1871 it aspired to be a Paris of the prairies. Last year it came good, opening the mile-long Riverwalk promenade. Lined with waterside café-bars, it’s the Seine with skyscrapers.” Edwin Heathcote of The Guardian called it “complex, urbane, intriguing… its success has been instant and electrifying.” The Chicago Riverwalk also garners stellar reviews from public reviews sites such as Tripadvisor, Foursquare and Yelp.