The North Plan: A Play With a Purpose … 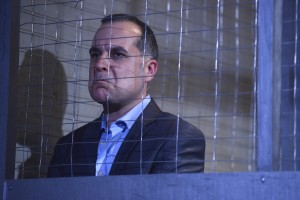 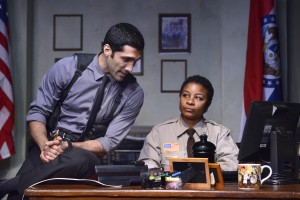 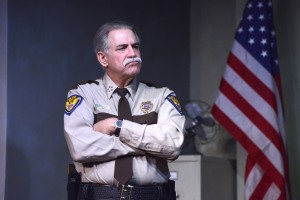 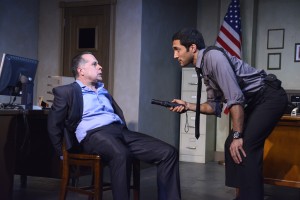 On opening night, April 27, The North Plan suddenly became the highlight of my year. The night was chilly, but it did not cool down the fire that erupted inside The Elephant Theatre. The cozy, comfortable stage allowed the audience to get close to the actors and feel the play and experience a night full of laughter and thought. The North Plan is a ruthless splinter group seizes power in Washington, a bureaucrat for the State Department runs off with the new regime’s top-secret Enemies List. With Department of Homeland Security agents trailing him, he finds himself trapped in a police station in a small Missouri town. 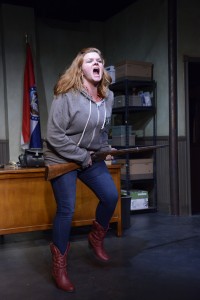 His last hope for survival is in the people around him: an unsympathetic police chief, an ambivalent administrative assistant, and a fellow prisoner, a motor-mouthed local who’s turned herself in for drunk driving. Kerry Carney’s performance as Tanya began the play, and she quickly had us laughing with her blend of quick-witted, beautifully timed responses and sarcasm. The exchanges between Tanya and Shonda, played by Bernadette Speakes, set the tone for a fast-paced, hilarious series of dialogue. Shonda became the straight-woman and allowed the timing of Tanya to surface and keep the plot moving quickly and entertainingly, while displaying her own sense of timing to compliment the dialogue. The introduction of Carlton, played by Chris Game, fused with the storyline, and Carlton became equally witty and serious. Carlton expressed the energy and seriousness necessary to keep the audience entertained. The stoic appeal of Swanson, played by Stan Roth, allowed the audience to empathize with the characters; when his serious nature put the focus on the seriousness of the issues, as well as enjoy the comedy of the dialogue, all the characters truly shined.

When Act II began, Pittman and Lee, played by Dominic Rains and John Forest, emerged as the antagonists in the play. Their banter and aggression flowed so fluidly they could have been genuine Homeland Security Agents. As the play came to a close, the audience continued to laugh and enjoy the quintessence of comedy and entertainment with a serious underlying message. This is a play that cannot be missed! Special thanks go to Jason Wells for writing such a wonderfully entertaining play; David Fofi for directing a play that accomplishes a difficult task: mixing comedy with a message. Also, thanks go to Ken Werther and the rest of the cast and crew for bringing to Hollywood a wonderful and exciting play.

PRESENTS THE LOS ANGELES PREMIERE OF

THE NORTH PLAN BY JASON WELLS

OPENS APRIL 26 AT THE ELEPHANT SPACE

When a ruthless splinter group seizes power in Washington, a bureaucrat for the State Department runs off with the new regime’s top-secret Enemies List. With Department of Homeland Security agents trailing him, he finds himself trapped in a police station in a small Missouri town. His last hope for survival is in the people around him: an unsympathetic police chief, an ambivalent administrative assistant, and a fellow prisoner ­ a motor-mouthed local who’s turned herself in for drunk driving. The North Plan is a sharp, dark, dystopian comedy set in the here and now.

Playwright Jason Wells is a winner of the M. Elizabeth Osborn Award, and a finalist for the Harold and Mimi Steinberg/New Play Award, both from the American Theatre Critics Association. His other plays include Men of Tortuga and Perfect Mendacity. The North Plan debuted at Steppenwolf’s First Look in Chicago in 2010, and had its official world premiere at Portland Center Stage in Oregon. Of the play, the Chicago Tribune said, “A black and darkly entertaining comedy … fun, smart, involving, and just disturbing enough for a Saturday night on the town.”

There will be three lower-priced preview performances of The North Plan on Wednesday, April 24, Thursday, April 25, and Friday, April 26 at 8pm, and opening is Saturday, April 27 at 8pm. The regular running schedule is Thursday, Friday and Saturday at 8pm, through June 1 only. Tickets for previews are $20, regular performances are $25, and opening night tickets are $35 (which include a post-performance reception with the cast). The Thursday, May 2 performance will be ‘Pay What You Can.’ Also, there will be an added ‘Play Care’ performance on Saturday, May 25 at 2pm, at which parents can bring their kids, who will be looked after by experienced child caregivers (at no extra charge), while the parents watch the show.

The Elephant Space is located at 6322 Santa Monica Boulevard, just west of Vine, in Hollywood.  Street parking is available.

#FashionFriday – Ready For Anything: Whether you’re dressing for a high-brow meeting or simply heading to the office, never underestimate the power of looking your best. And by best I mean chic, elegant, put together, and impossible to ignore.