Eroica Trio: When it comes to classical music, there’s a good chance only a minority of us have a relatively mediocre knowledge of the major players. There is, of course, Mozart, Bach, Vivaldi, Debussy, and then we have Rachmaninoff, Dvořák, and Haydn. All wonderful composers in their own right, all with the direction of visionaries and the drive that masters such as them can only have. Luckily, I would get the opportunity to see three of these musical behemoths at the 600 Town Center Dr, Costa Mesa, CA 92626, in what has to be one of the more eclectic ensembles ever put together for the stage, to be played by one of the most magnanimous and widely-recognized schools of music: the Pacific Symphony orchestra.

The first of the evening’s performances are a strong indicator of what’s to come: Overture to The Creatures of Prometheus, Opus 43, by Beethoven. The guest conductor for the evening, Jean-Marie Zeitouni, is a zealous character who takes this brief (at only five minutes) fable and turns it into an odyssey of sights and sounds. He’s the sort of the man who knows how to paint a picture, how to turn simple F naturals into emotions, and C sharps into creatures. Music director of the Columbus Symphony and since 2011 artistic director of I Musici de Montréal, Zeitouni has an eloquent and fiery style that has helped him lead more than 200 performances around the world. I fancy myself an admirer of classical music—95.1 KUSC is the only station I’ll listen to during my daily commutes, much to the chagrin of my significant other and family—but I must admit that I am vastly inexperienced when it comes to “picking out the story” in a musical piece. In essence, me listening to classical music can be likened to looking at a coffee table art book and only seeing the colors instead of the overall picture. Zeitouni teaches you to read. To dissect. To understand.

Creatures of Prometheus starts off with one of my personal classical motifs, a pomp and circumstance blast of musical notes to encourage the audience to pay attention: this is a story worth hearing. A melodic dance-drama ballet piece surrounding the Greek tale of a titan who brought fire down from Mt. Olympus to the very people he created—us—the orchestra does a wonderful job of balancing between a lilting soliloquy and dramatic bookend to a story which, if you follow even the most basic Greek texts (or, perhaps, have seen the Ridley Scott film of the same name), doesn’t end well for the cultural hero, symbol of progress, and champion of mankind. Listening, you will constantly find yourself being pulled to and fro, with notes denoting the lackadaisical meanderings of a utopia crawling with newborns, to the more sinister bars hinting at the inevitable tempest following Prometheus’ treasonous acts against the gods. Simply put, a questioning of life, by life. It is, in and of itself, a whirlwind that captures the imagination and ignites the senses—and in only the first five minutes! 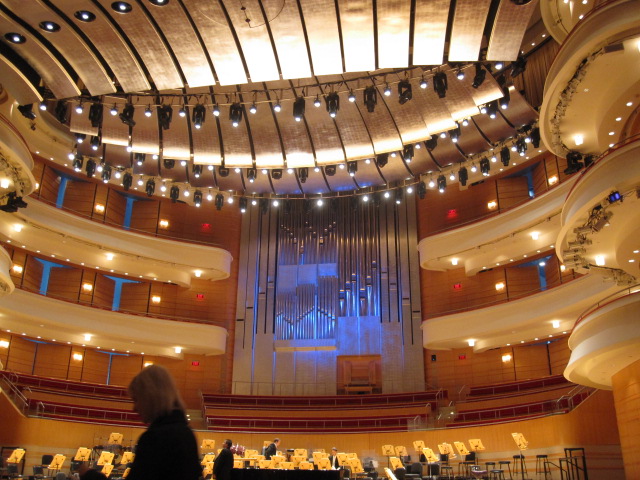 Jumping ahead, we come to the orchestra’s performance of Debussy’s Nocturnes, split into three movements: ‘Nuages’ (clouds), ‘Fêtes’ (Festivals), and, my personal favorite of the three, Sirènes (Sirens). Now, the pieces are pretty straightforward; in ‘Nuages’, Zeitouni rouses the players into muted stoicism as they reenact the slow course of silver-lined vessels carving paths out of a star-studded sky. Likewise, in ‘Fêtes’, the story of two parties coinciding—one a festival parade passing by the other—are emphasized with powerful notes and festive whimsicalness, coming together in a clandestine chorus of color and lights. As the parties pass in opposite directions, so too does the music begin to fade away until we are left only the dark of night. However, it is this darkness to which we arrive at Nocturnes’ third and final movement, ‘Sirènes’. As mentioned earlier, this was my favorite of the three; accompanying the orchestra here are Women of the Pacific Chorale. Debussy, integrating women’s voices into the piece to mingle with the lithe undulations of the orchestra, uses the seemingly endless rhythms produced to weave one of the more fascinating and hypnotic arrangements you’ll ever come across. Visions of seafaring captains and marauding pirates being culled from their various journeys, meld with the atmosphere in a billowing song and dance of passing mermaids. It should be noted here that the Pacific Chorale, internationally recognized for exceptional artistic expression, stimulating American-focused programming, and influential education programs, stands out as one of the more fascinating aspects of the evening, a quasi-eighth wonder whose slow, organic vocals threaten to pull even the most stationary of audience members from their seats and into the depths of the sea.

And yet, all of this pales in comparison to the headliner of the evening, Beethoven’s Triple Concerto in C Major for violin, cello, piano, and orchestra, performed by one of the most successful all-women chamber ensembles in the world, the Eroica Trio. Garnering its name from a Beethoven piece denoting a “middle-period” in the composer’s work where pieces henceforth were riddled with emotional depth and structural rigor, the group—made up of cellist Sara Sant’ Ambrogio, pianist Erika Nickrenz, and violinist Sara Parkins—similarly takes audience members aback with their incredibly magisterial ferocity and practiced wit. What better piece to emphasize the skills of the titan threesome than the Triple Concerto, a sporadically played arrangement that brings out the magical allure of each member, burdened with individual yet simultaneous solos throughout. Sant’Ambrogio said it best in a recent interview: “It is incredibly exciting watching three soloists toss these amazing melodies and virtuosic fireworks back and forth to each other and the orchestra while the conductor holds it all together and shapes that lush wave of orchestral sound that Beethoven is so famous for.”

Weaving in, around, through, and throughout one another and the orchestra, their bows and smiles similarly flashing with an iridescence not unlike lightning, the Eroica Trio tackle three movements of the Triple Concerto with a deftness of ingenuity as apparent as their winning charm and stage presence (I have no doubt that the applause at the beginning was as much a welcoming to the stage as it was an expression of being in the company of such visions). Think you’re already familiar with the Triple Concerto? See and hear it for the first time when you bear witness to the Eroica Trio’s uniquely satisfying proposition of the heart and soul. An unforgettable performance, truly.

While I am a viewer, in this article I want to tell you something concerning the fourth and final piece of the evening, Benjamin Britten’s Young Person’s Guide to the Orchestra; many people might not know this about me—or, at least, no one outside the circle of peers I had back in high school—but I actually practiced the Viola for about eight years before giving it up in the latter half of my senior year. During those years, however, despite having such a steadfast association I very much disliked having to play in front of the rest of my class. So when I learned that Young Person’s Guide is referred to as a “nowhere to hide” piece – because literally every member (or, rather, section) of the orchestra has a solo – I look down at my hands during this final performance and immediately notice how sweaty my palms are.

The Young Person’s Guide, played in part to celebrate the centennial of one of the greatest composers of the 20th century, is pretty much just that; coupled with a large screen whose video interrupts the performance at numerous intervals, each section (e.g. the strings, the brass, the woodwinds, the percussion, etc.) is “introduced” before playing an individual variation on Henry Purcell’s widely known 1695 Rondeau from incidental music for the play Abdelazar. It is actually quite a charming piece, highly transparent in nature, and a fun departure from usual classical fare.

Upon taking leave of the Renée and Henry Segerstrom Hall, my guest and I, enthralled by such an immensely powerful performance all around, couldn’t wait to continue the experience with the help of our favorite classical radio host, Jim Svejda.

Pacific Symphony, celebrating its 35th season in 2013-14, is led by Music Director Carl St. Clair, who marks his 24th season with the orchestra. The largest orchestra formed in the U.S. in the last 40 years, the Symphony is recognized as an outstanding ensemble making strides on both the national and international scene, as well as in its own community of Orange County. Presenting more than 100 concerts a year and a rich array of education and community programs, the Symphony reaches more than 275,000 residents—from school children to senior citizens.

For more information regarding events or to purchase tickets, call (714) 755-5799 or visit www.PacificSymphony.org

The Thursday, Nov. 14 concert was sponsored by Symphony 100. Pacific Symphony’s Classical series performances are made possible by the Hal and Jeanette Segerstrom Family Foundation, with additional support from American Airlines, The Westin South Coast Plaza, KUSC, and PBS SoCal.

Tyler Dean is a recent graduate from Cal State University, Long Beach, with a Bachelor’s degree in Film and Electronic arts, emphasis on Film Screenwriting. A California native all his life, it would be in the Golden State that Tyler would pen several screenplays, a number of which have been turned into short films, and one a feature film that premiered in 2012 with the help of co-writer Jacob Whitley. Not only an avid filmmaker, but a fan of cinema as well, Tyler says he attributes his love of film to a host of influential professors from his years at Saddleback Community College and CSULB, and the Criterion Collection—an organization that seeks to preserve important, influential, and landmark films. Finding that the corrosive limitations of strict procedural journalism forbade his written work from bearing fruit in the publishing world, Tyler came to "A Taste of Dawn" because of its wanton desire in seeing the writer as an artist, one with a voice that deserved to be heard. Tyler is currently working on his next film project—a sci-fi mystery-thriller about an amnesiac and his journey of self-discovery, after waking up on an abandoned space station in the middle of nowhere.

Open
Our backyard oriole is really digging the hummingb

Our backyard oriole is really digging the hummingbird food! Been here every day talking away ... 🐥

I was feeling kind of disappointed that the #WildMovie Women’s retreat came to an end. I will admit I was petrified at the onset of going – to be joining a group of women I’d never met. Call it high school jitters or life experience, but being amidst a group of fiercely driven women inspires me – and – terrifies me.