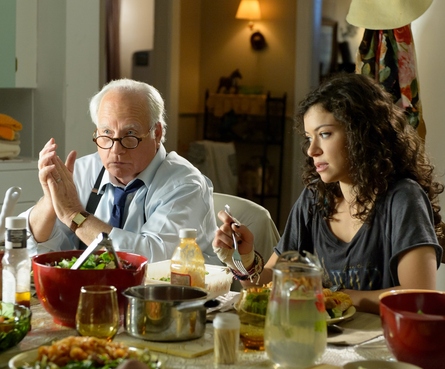 Hit the road with ‘Cas and Dylan’

A dying Doctor, who plans to check out on his own terms, takes a reluctant detour when he inadvertently winds up on the lam with an ‘anything-but-normal’ 22-year-old girl.

I was never fond of road trips growing up. Whether it was because I and my three brothers did not share my mother’s affinity for pretending we were settlers traversing the Oregon trail, or sleeping overnight in anything less than a three-star hotel was for me a notion of nightmarish quality (hey, I was a spoiled kid); to describe these cramped drives as ‘dysfunctional’ would be putting it mildly. Had our 13-hour drives been anything as deep or enlightening as Jason Priestley’s feature film debut Cas & Dylan, however, maybe I would’ve learned a thing or two about, what’s the word, living in the moment.

An exercise in the futility that comes with trying to dissect what it is that makes life worth living, Priestley’s film is largely successful on the backs of the mesmerizing Tatiana Maslany (Orphan Black) and veteran actor Richard Dreyfuss. Cas & Dylan follows one terminally ill Dr. Cas Pepper (Dreyfuss) on his way home one day from work at the hospital, when he is approached by the charming Dylan Morgan (Maslany), a 22-year-old quick-witted, smooth-talking social misfit, and talked into giving her a road home. But what should have been a quick stop turns into a hit-and-run when Dylan’s angry gun-wielding boyfriend gets in the way of Cas’ car. Fugitives of the law, the pair find themselves crossing the Canadian countryside and wind up discovering more about themselves than just a shared penchant for “murder.”

As far as “road trip” films go, Cas & Dylan isn’t the most original offering to come out of the Newport Beach Film Festival. Don’t get me wrong, there are many funny points throughout the movie, but the inevitable awkwardness of the pair trying to check into a motel for the evening, or an instance later in the film when an elderly woman invites “the cute couple” over for dinner to a hilarious conclusion, well, it can be seen from a mile away. And so we come back to the actors; although audience members might be more familiar with Dreyfuss’ work, it’s actually Maslaney, peppering the screen with her refreshing charm and charisma, which will keep you from refilling that popcorn mid-screening. Even Priestley, who you might recall from his days as the 90210 heartthrob Brandon Walsh (and has since gone on to a very successful television career), rises to the occasion in several smartly-constructed scenes, managing to stitch together a narrative that, while lacking in trailblazing novelty, imparts a sense of camaraderie in the cinematic framing of the long road that all of us are traversing, day-to-day, with next to no idea of where we’re going.

Luckily for us, Priestley’s characters do know where they’re heading, or at least temporarily. Dylan, an aspiring writer, manages to convince Cas that she’s currently in talks with a publishing house, while Cas, going through his own bout of writer’s block—the culprit being a series of suicide notes—agrees to let her help him come up with the perfect “legacy” note on the way to the publishing headquarters. It’s as simple as it sounds, which is the interesting dichotomy to Priestley’s story: our characters are, in essence, an embodiment of life and death. Cas, the aging doctor who knows when his ticket’s up, and Dylan, a well of bubbling possibility and promise, on her way to motherhood after we find out she’s pregnant. While this does allow for the director to insert some hilarious sequences (for example, in one scene Dylan slips Cas some ecstasy to help him loosen up), the film dips in and out of mediocrity when we realize that, up until just before the film’s final moments, there is hardly any character growth… or depth, for that matter.

In short, although certainly not a facelift for the “road trip” genre by any means, I don’t think anyone can suggest that Cas & Dylan failed in conveying a positive message of living life to the fullest, and to never lose hope even in the face of undeniable certainty. We can hardly fault Priestley for that!

I had the pleasure of sitting down with two of what I believe will be the actors to keep your eye on in the coming years: Garrett Backstrom and Collin Ford. Invited to attend the Red Carpet DVD Release Event of Michelle Danner’s “Hello Herman”, I was asked if there was anyone attending I’d want to interview. While the list is always interesting, I wanted to interview someone I felt hadn’t really had an opportunity to be seen outside of their realm. For the first time ever, I interviewed two, under 18, rising stars in Hollywood. Both 17 years-old, both with a rather successful career already under their belt, and the endless potential that will no doubt make them household names very soon.