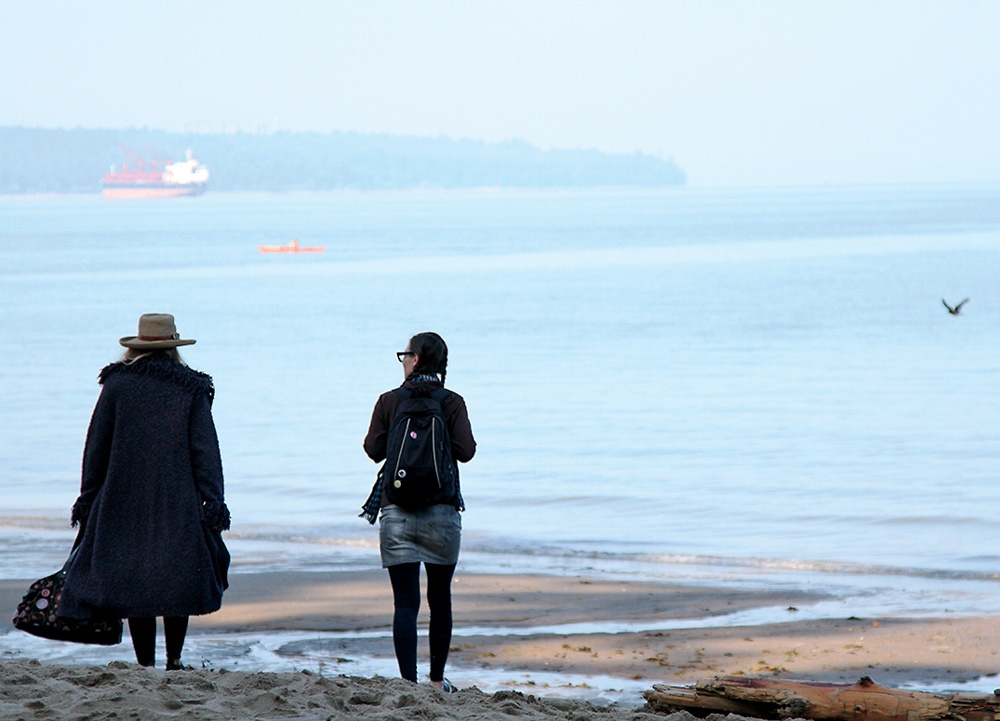 Down River is the emotionally stirring story of three young women teetering on the edge between creative breakthroughs and personal breakdowns, and their connection with the older woman they rely on for guidance, support and inspiration.

Pearl (Helen Shaver), an older woman struggling with sickness, mentors three young women living in her apartment complex pursuing their artistic dreams. The young women all deal with their own personal struggle: Aki (Jennifer Spence) is a painter unsure of her artistic merit, possessing a critical father wanting her to pursue a career in computer engineering. Harper (Colleen Rennison) is a talented singer/songwriter with a soulful voice, but relies on prescription drugs and using others to get by, and Fawn (Gabrielle Miller) struggles with getting her acting career off the ground as her fiancé urges her to start a family before they both become too old. Pearl uses her life experience to help guide them, becoming a safety net as the young women run into problems.

Down River is more than a film about four women at transitional stages of their lives: it is a statement about how we as humans struggle with fear of failure and ultimately must let go of what we can’t control. Near the middle of the film, Aki watches Pearl go for a swim in the ocean, but herself doesn’t swim since the ocean is vast and it is often unknowable in terms of what creatures are around or beneath you—her fears becoming transparent afraid of what lurks in the depths. Many segments sprinkled throughout the film elevate the narrative beyond a simple focus of women struggling with artistic success: it uncovers an underlying personal issue that each character shares: the fear of choice. Where will their choices take them? And whatever paths they do venture on, will they be satisfied where they lead? This fear restricts the characters often, and Pearl, having turned 60, has led a long life comprised of many choices—good and bad—and tries to impart wisdom on Aki, Fawn and Harper so they don’t have to make the same mistakes she made: surrendering to uncertainty and fear, knowing it leads to regret rather than accomplishment.

Besides the film’s underlying and well-orchestrated themes, it wouldn’t work without brilliant editing, metaphor and strong dialogue that is bolstered by profound complexity that every actress brings to their performance—especially Helen Shaver as Pearl who speaks a plethora of emotions with a single glance. Every character is strong yet flawed, and the ambiguity each woman carries makes them authentic and relatable—you root for them all in different ways. As they battle seemingly insurmountable conflicts—internal and external—never for a moment is there a sense that these characters can’t be real people; they live and breathe onscreen, and one would be remiss to not mention Robert Wenzek and his superb editing, doing an excellent job of intertwining each woman’s story arc seamlessly, never focusing too much or too little on one person and creating a pitch-perfect pace with brevity yet deeply significant characterization.

Written and directed by Benjamin Ratner, Down River is a sterling example of a filmmaker honing their skills and carving  our cinematic intricacy with a steady hand. It is a raw, frequently touching study about the fragility of life—and of the human psyche, this poignantly resonates with audiences deeply; while the film is often heartbreaking, it ultimately paints an optimistic portrait about embracing all facets of life and ambition—even at the most dismal of times. The sounding theme? Facing life head-on, be it a positive or negative experience, molds who we are as people. Life invites us all to live in retreat as a willing surrender of our own success and evolution.

I was born in Los Angeles; Santa Monica…