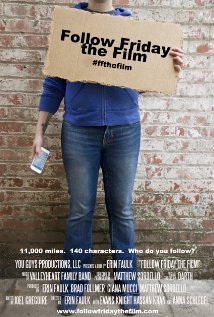 A self-proclaimed Twitter addict’s adventure to meet 140 people she follows on Twitter in an attempt to become verified as an authentic account. With a minimal crew of fellow Twitterers, she embarks on a 45-day, 11,000-mile journey around the U.S. and explores the increasingly blurred lines between ‘real’ and ‘online.’ This is a look through the eyes of the people who make social media, and one who stepped out from behind the avatar and into the lives of people she never expected to meet. [NBFF ‘14]

Technology is a funny thing. In the 21st century, we’ve come to a point in society where we decry the notion of having to live without it; children get their first iPhone in kindergarten and first grade, debates are no longer over ‘phone versus no phone’ but ‘Android versus Apple’, and sightings of anything resembling a flip phone are met with an awe usually reserved for historical museums (and yes, I’m speaking from personal experience). Now we have Facebook, Myspace, Tumblr, Instagram, Pinterest, Reddit, Kik, etc.—social media sites and smart phone applications that everyone uses to not only communicate with one another, but to receive news, announce a life-changing decision, or maybe even to pester friends and family about checking out your most recent magazine write-ups. You could argue that social media today has become so ingrained into our society that even the days of simple digital post-it note status updates are numbered, what with up-and-coming full-body, three-dimensional immersion on its way.

Taking audiences beyond the computer screen is the 2013 road trip documentary, Follow Friday the Film, with director Erin Faulk taking up the role of social media maverick on her journey into a “hyperreal” unknown, which some circles refer to as outside.

Follow Friday gets its namesake from the Twitter hashtag “#ff”, which can denote a series of recommended people or services to “follow” on said day of the week (for example: “Hey everyone, #ff @TylerGDean @ATasteOfDawn”). To “follow” someone is to subscribe to their Twitter page—once you do that, you will in essence be clued in on whatever that person decides to post and share with the world in 140 characters or less… whether it be a world-changing discovery, or what they had for breakfast that morning. If this sounds complicated, I promise you the film itself is much more digestible. Following a brief, conveniently captured-on-film argument between Faulk and her husband of nine years on the merits of following the lives of complete strangers, the former decides to embark on what will comprise the remainder of the film: an 11,000-mile journey across the U.S. over the course of 45 days, to meet 140 so-called strangers and affirm her existence in a world of avatars and digital nomenclature.

Despite the metaphorical undertones of self-discovery that oftentimes go hand in hand with the road trip genre, Follow Friday’s strength lies in the fact that the first-time director isn’t so much realizing a part of herself as she is giving an identity to complete strangers. Men and women we ourselves might encounter on a day-to-day basis without that second thought to make the connections that this world so dearly needs. In this way, you could almost consider the film a sort of reaffirmation of the basis by which social media was founded in the first place: that people are interesting, generally good, and worth connecting with. Follow Friday’s makeup is a perfect testament to this; funds to pay for gas, food, and a crew were raised via Paypal and Kickstarter; Audi donated a car for the

trip after Faulk and her team tweeted about the film; and organic food suppliers offered to ship out packages of fresh produce for the team to munch on along the way, again a by-product of Faulk’s tweeting. Now, this isn’t to say you should plan a visit with the next “ILikeFish” you meet in a chat room (there’s a 33% chance you may meet Chris Hansen), but so many people depend on fear—of appearances, of socioeconomic status, of ifs and buts—that most probably can’t even remember the first name of their next door neighbor. Faulk and her team are there to show us there’s nothing to be afraid of.

Follow Friday begins and ends with Faulk and her team waiting in the lobby of Twitter Headquarters, located in San Francisco, to hear whether or not they’ve received the social media site’s coveted verification badge. Usually reserved for public figures like Kim Kardashian who can prove they are real, it’s a generally accepted rule of thumb that it’s next to impossible for a general user to attain said status, which only further endears the film as a sort of underdog road doc—doesn’t get more “real” than that, folks. A quick visit to the director’s Twitter handle (@erinscafe) will tell you the outcome of said meeting (and yes, it’s disappointing—but it’s important to note that the optimism retained throughout the film nevertheless carries beyond this simple revelation, well into the credits, and probably even into your drive home).

Leaving the theater, your senses will be riddled with a contagious sense of adventure and wonderment with regards to the limitless possibilities of social media and the people behind the 1s and 0s of Tweets and Facebook status updates. That, not some silly badge, is the true achievement of Follow Friday the Film.

Follow Friday the Film was highlighted in NBFF’s 2014 Women Direct! series, which sought to promote women-directed films in the line-up. The series played host to over 30 of these films by women, including the world premiere of the Women Direct! spotlight feature, Fort Bliss (dir. Claudia Myers), which was followed by a panel comprised of several female directors and representatives from the Alliance of Women Directors and Women in Film International.

Before I introduce this in-studio performance, this one has to begin with a story. First, this is one of my favorite artists of ALL TIME. And I don’t say that lightly. SHANA HALLIGAN. I was first introduced to her music in 2010 while online searching for creative websites. A site had this music on there – sexy, melodic, sultry, playful, and incredibly writing worthy.