The Story of Death by Audio

A Saturday night in Brooklyn, we were invited to screen “Goodnight Brooklyn” on the rooftop of the Old American Can Factory as part of the Rooftop Films film Festival. The Festival “brings the underground outdoors”, and the art venue was filled with people downstairs in the courtyard and upstairs on the rooftop itself. The night was misty and chilly by New York’s July standards, but the turnout was solid, the rooftop dotted with faces featured throughout the film.

Before the screening begins, the band Growing performed live. Shortly after, the movie which premiered at SXSW earlier this year, began.  The documentary, directed by Matthew Conboy, chronicles the rise of Death by Audio (the performance venue, living space, guitar pedal business, and creative community), and it’s demise due to Vice Media buying out the building.

The focus on the DIY origins of the club captures the energy of the time (roughly 2007-2014), showing the friends who created and lived in the space and the community that grew around it. It’s one of those movies that’s fun to watch because it was made lovingly by someone who was part of the scene. Even if you weren’t there, you feel like you were because of the thoughtful way it was shot. The guys who lived there faced many perils even before their space was taken over, like raw sewage raining into a bedroom and cops threatening to shut down the parties. You see their hilarious camaraderie as they deal with those issues, and their commitment to having a space of their own to do what inspires them. A big message was the importance of a DIY scene – that it’s for everyone, and it empowers people to see that they don’t need permission; they can create their own music, art, communities, and most importantly, spaces for those things to exist and grow. It was something worth hearing.

In the final days of the DBA, before their space was taken over, bands came together and performed, making big proclamations about the importance of the space and love at the end of an era. Sound man and Party Spirit,  Edan Wilber was in tears as he explained the wealth of memories he accumulated through his experiences living at DBA. Toward the end of the movie, the rains on the rooftop picked up momentum, and crowds flocked downstairs for beers and conversation.

Among the now rain soaked guests were the DBA creators and musicians featured in the documentary: Oliver Ackermann, front man of A Place to Bury Strangers  (AKA “the loudest band in New York”) also built and sold guitar pedals. 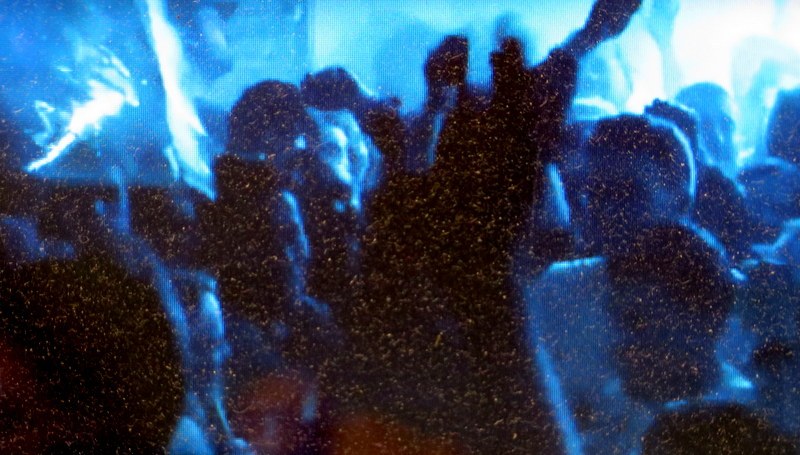 “It’s so cool that everyone came out!” he said cheerfully.

Musician Katie Rush, a New York native and veteran of the Market Hotel and DBA parties, remembers the art scene and says she hopes the world catches on to the doc.

“It was a home for everybody, not just bands. I wish I could’ve played there. People should think about the music like DBA did.”

Another partygoer named Dan said, “I’m a punk rocker, so I was aware of the place, but not being from New York City, I hadn’t experienced it. It’s inspirational, the doc. It’s like when you first start listening to the Sex Pistols, or read Cometbus for the first time and realize there’s a whole new world out there for you to explore.”

While we all gathered, drying off through enlivening talks with musicians and strangers, eventually Grooms and A Place to Bury Strangers played live for a while. Overall, the film was abundant in high-energy and beautiful footage of bands playing and crowds raging. The final words of the film were:

Every great city has a space like Death by Audio. If it doesn’t, you should start one.

The Story of Death By Audio brings viewers inside the last underground venue for music and art in Williamsburg, Brooklyn, a neighborhood once defined by its cultural contributions to the city of New York. The feature length film chronicles the origins, community­-building, influence and ultimate closure of one of Brooklyn’s best DIY venues, ironically at the hands of a former champion of their efforts.

Rooftop Films is a non-profit organization whose mission is to engage and inspire the diverse communities of New York City by showcasing the work of emerging filmmakers and musicians. In addition to their annual Summer Series – which takes place in unique outdoor venues every weekend throughout the summer – Rooftop provides grants to filmmakers, rents equipment at low-cost to artists and non-profits, and supports film screenings citywide with the Rooftop Films Community Fund. At Rooftop Films, we bring underground movies outdoors. For more information and updates please visit their website at www.rooftopfilms.com.

“A filmmakers’ journey is never dull or without challenge and that, well – that – restores my faith in the world of art. Film is that beautiful world that invites us in to one another’s lives, imaginations, and complex humanity. The cinema, the arts – they feed us all, individually, collectively, and purposefully. They strip down boundaries and beg us to have an open mind.” – Dawn Garcia. Screenwriter, Lover of Film.