Notice: Undefined offset: 1 in /var/www/wp-content/plugins/ninja-forms-uploads/vendor/benthedesigner/dropbox/OAuth/Consumer/Curl.php on line 153
 Sipping Wine In Athens In Winter

You might be shoveling your driveway right now or sitting by a warm fire sipping hot chocolate and dreaming about a far-off destination so we decided to do a little recon. Where did we end up? Athens, Greece and now is the perfect time to visit. 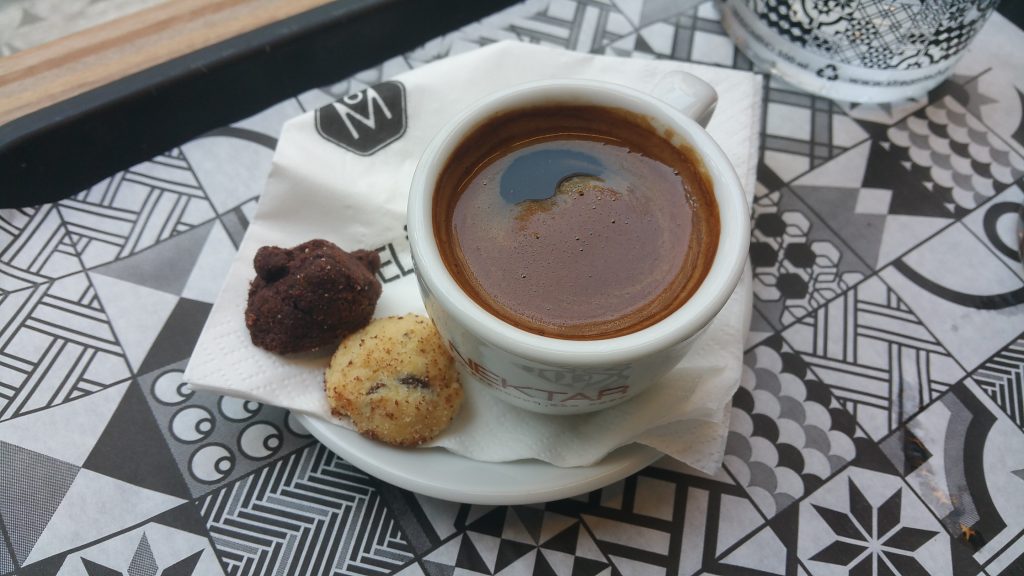 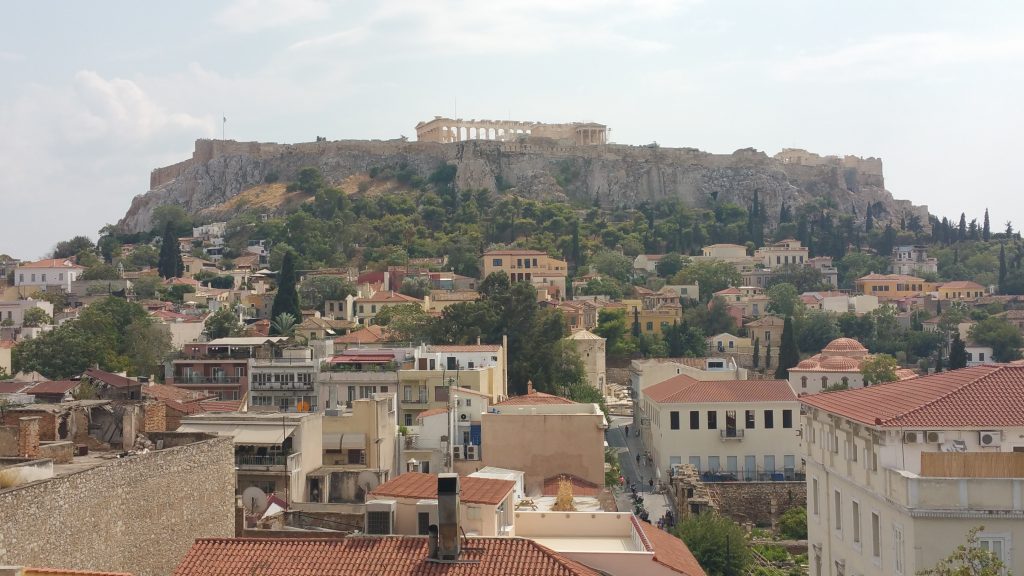 Athens is the capital and largest city of Greece. It was also at the heart of Ancient Greece and is home to the Acropolis and a slew of 5th-century BC landmarks. Whether you are a history buff or heading off to an island, Athens is a routine stop during any trip to Greece. So. we wanted to give you plenty of reasons to go in winter and spring rather than wait for summer (when everyone else is there and the weather is hot and sticky!) The late winter/early spring months have average temperatures in the mid to high 50s°F and sees less rain and more sun than other winter months. In other words … ideal. 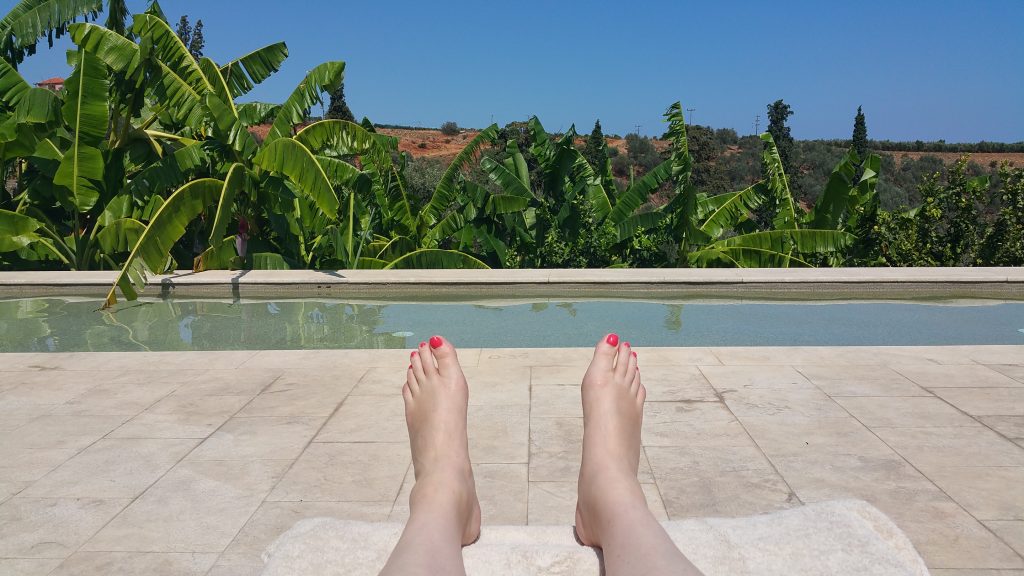 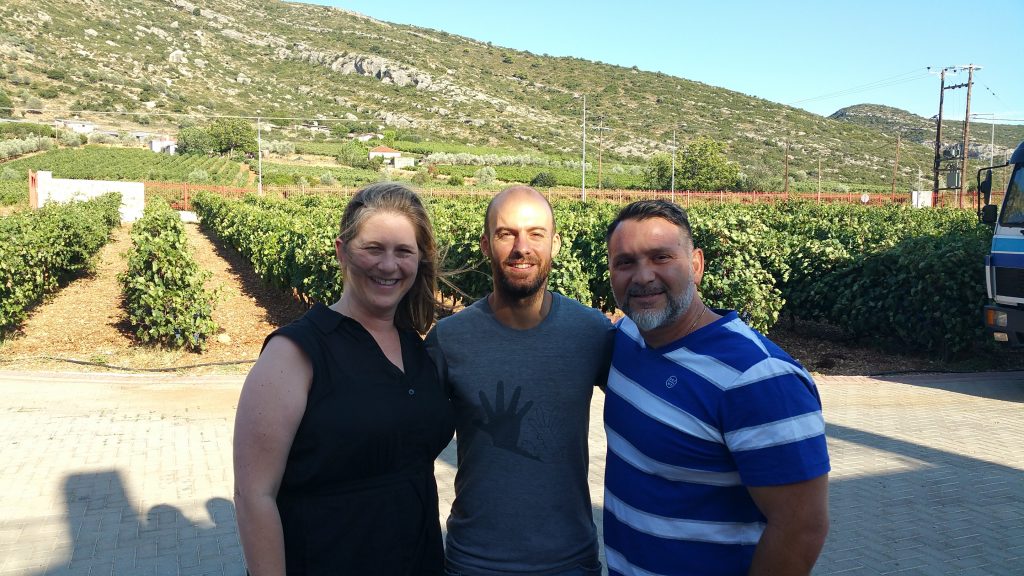 Make your home base the newly renovated St.George Lycabettus boutique hotel. Family-owned since 1975, the St. George Lycabettus is nestled into the slopes of Lycabettus Hill, a Cretaceous limestone hill that reaches 908 feet above sea level, in the city’s luxurious Kolonaki neighborhood. Just blocks to Syntagma Square, home of the Greek Parliament, the hotel is in the heart of Athens but also sits above the city, with panoramic views of the Acropolis and the Saronic Gulf and beyond. With 154 guest rooms, the room rates in February and March are approximately 117 Euro per night ($125/night) and breakfast is included. The hotel also offers a rooftop pool, fitness room, spa, screening room and dining. 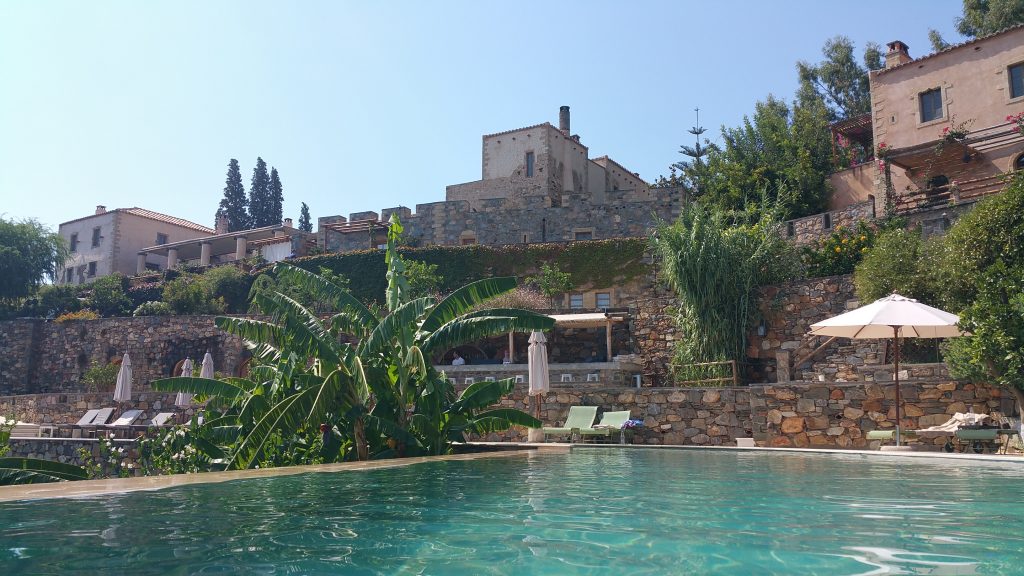 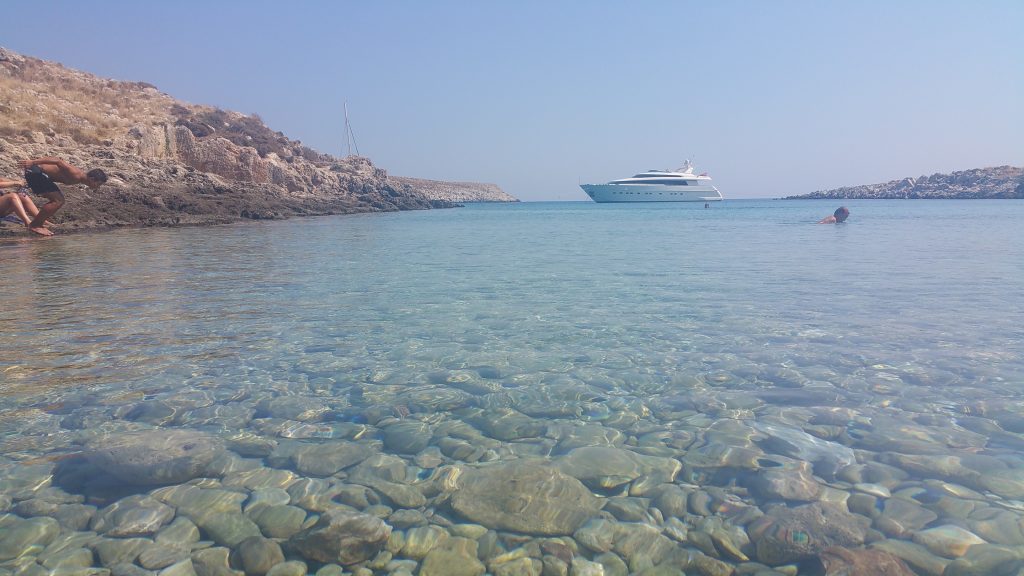 Of course, you need to visit the Acropolis and the famous archaeological Acropolis Museum. But sometimes the best way to explore a city or culture is through its food and wine … and we’re big fans of that!

With the hotel built into the slopes of Lycabettus Hill, a hiking trail is just outside your hotel room door. Starting at the bottom where pine trees cover its base, you can walk up the winding path to the top of the hill that sits at 908 feet above sea level. At the top is the 19th century Chapel of St. George, a theater and a restaurant. The walk takes approximately thirty minutes, but you can also take a funicular up the hill and/or down it. This is a lovely way to stretch your legs in the morning and enjoy the fresh air.

Explore the Food of Greece

A walking food tour through Athens is a fun way to get a sense of the city’s authentic dining scene and discover local treasures. I experienced one of these with Culinary Backstreets last year. That said, you can also explore the diversity of foods of Greece at Meliartos. 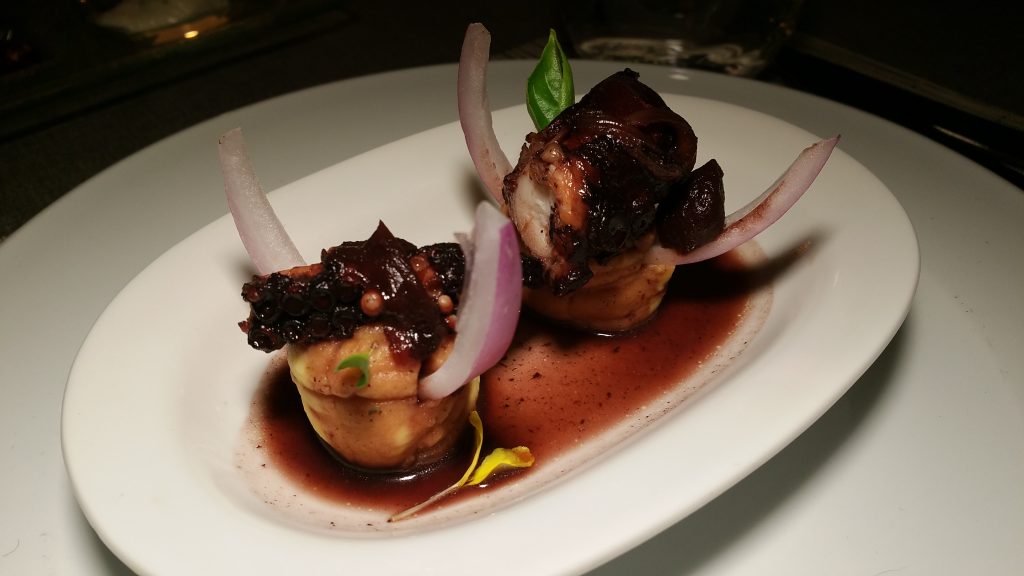 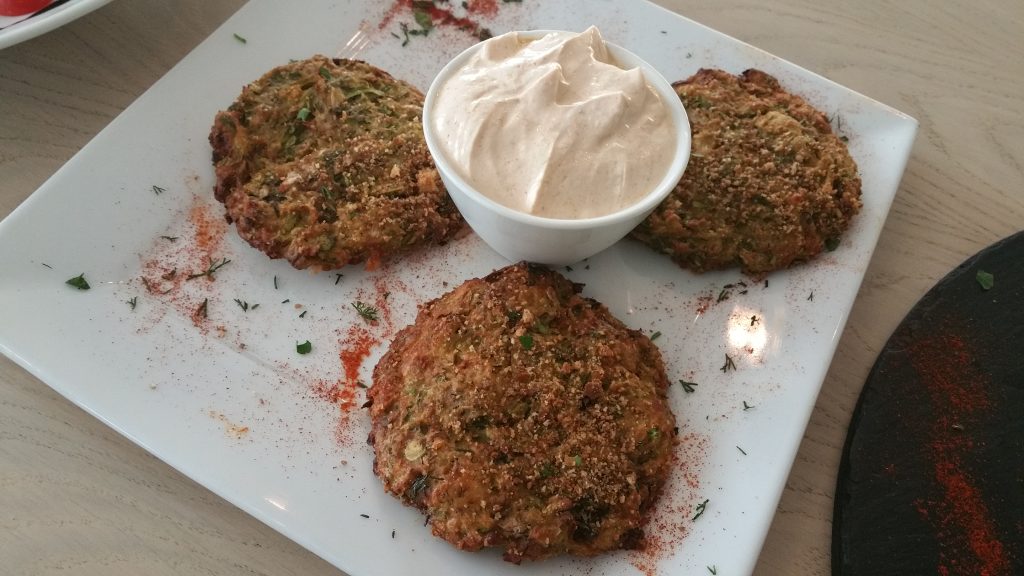 Dimitris Digenopoulo opened Meliartos three years ago with the goal of promoting Greek gastronomy with a modern twist, featuring local recipes and raw materials from local producers. Digenopoulo could not find a good pita (sandwich), that was fresh and made with natural ingredients, for his son. So, he decided to open his own place.

Meliartos of Athens is in the old historical neighborhood of Plaka, near the Acropolis. It sits on a busy corner with one side open to the street. Inside there are five sections: 1) the pie shop, 2) the creamery and pastry shop, 3) the coffee shop, 4) the kitchenette and 5) a retail shop with local products. You can pick up something to go or sit and eat. You can also take a cooking class and learn how to make some of the dishes.

Everything is made in-house, with the exception of the croissants. In the Pie shop, there are the traditional handmade pies from different regions in Greece. Phyllo, made with water, salt, flour and extra virgin olive oil, is rolled out and filled with spinach, vegetable, cheese and feta or chicken and caramelized onions. The Kourou is made with water and natural butter that is flaky, thick and rich and melts in your mouth like a good pie crust. Bougatsa is a traditional Greek pita pie from the northern part of Greece and is served savory with cheese or sweet. In the Creamery and Pastry shop there is baklava, galaktoboureko, Greek yogurt, rice pudding and fresh ice cream. In the Coffee shop, there is traditional Greek coffee which is roasted on hot sand, as well as espresso drinks. In the Kichenette, the chefs create fish and meat dishes, as well as salads, daily. And the flavors of Greece can be taken home through the locally produced olive oils, honeys, vinegars, jams and tapenades. 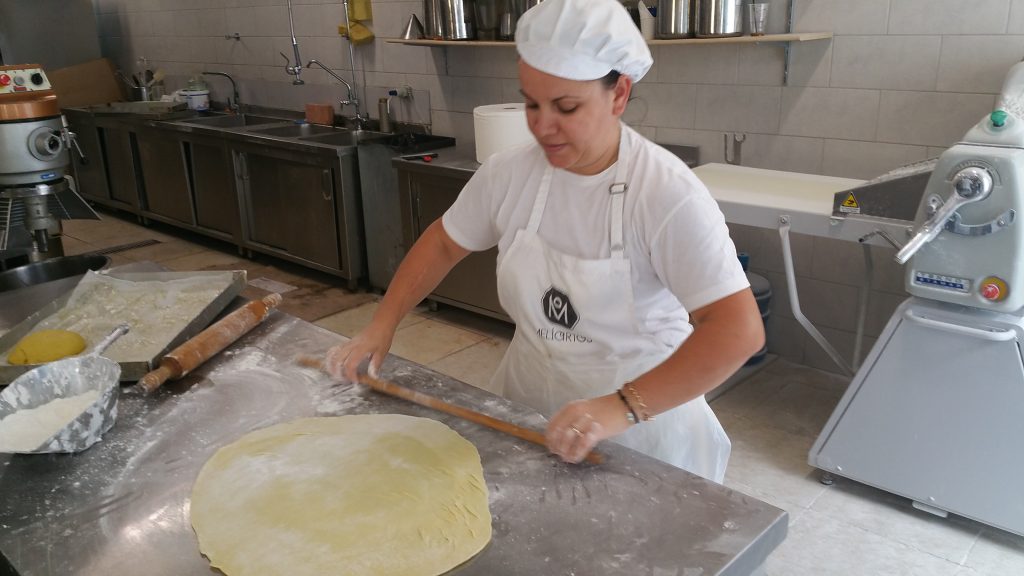 Wineries are located throughout Greece and there is even one in the city of Athens. Located east of the Athens airport in rural Attica, only two kilometers from the Agean Sea is where the most historic wines in ancient times were produced and where the main vineyards of Athenians are located.

On my first trip to Greece the previous year, I had my first taste of retsina, the Greek white wine that is aged with tree resin for a very distinct taste. At this point, I hadn’t heard such flattering things about retsina over the years but when I tasted my first one, it wasn’t bad. In fact, it was quite interesting and sort of grew on me. Turned out that that first retsina I had tasted was from Papagianakas in Attica and made with the white grape savatiano. 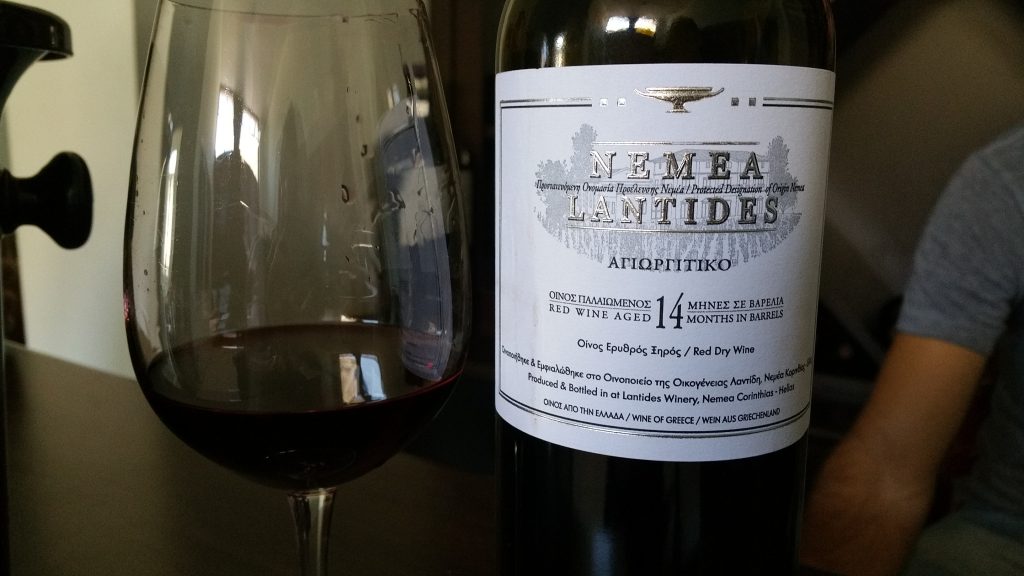 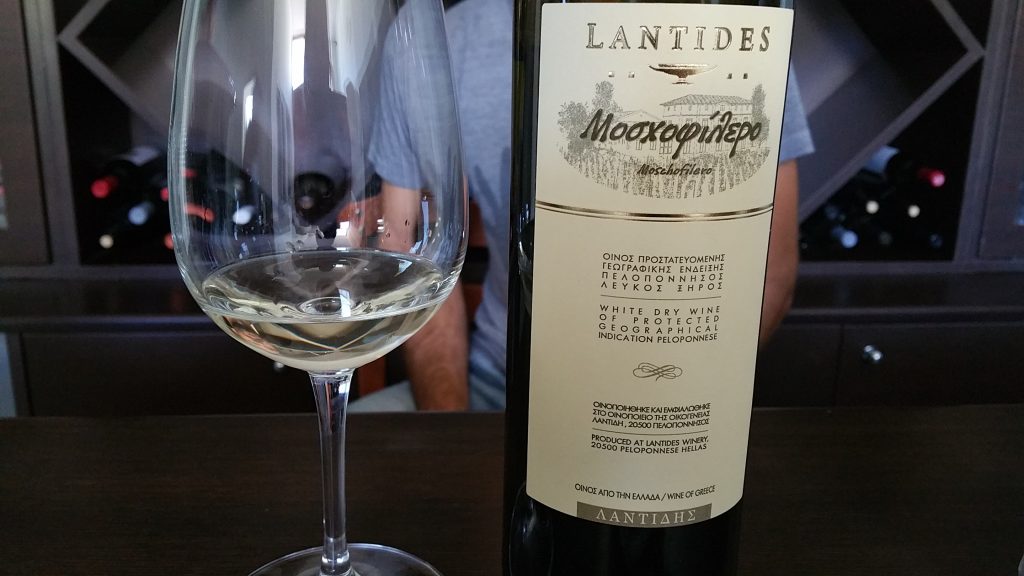 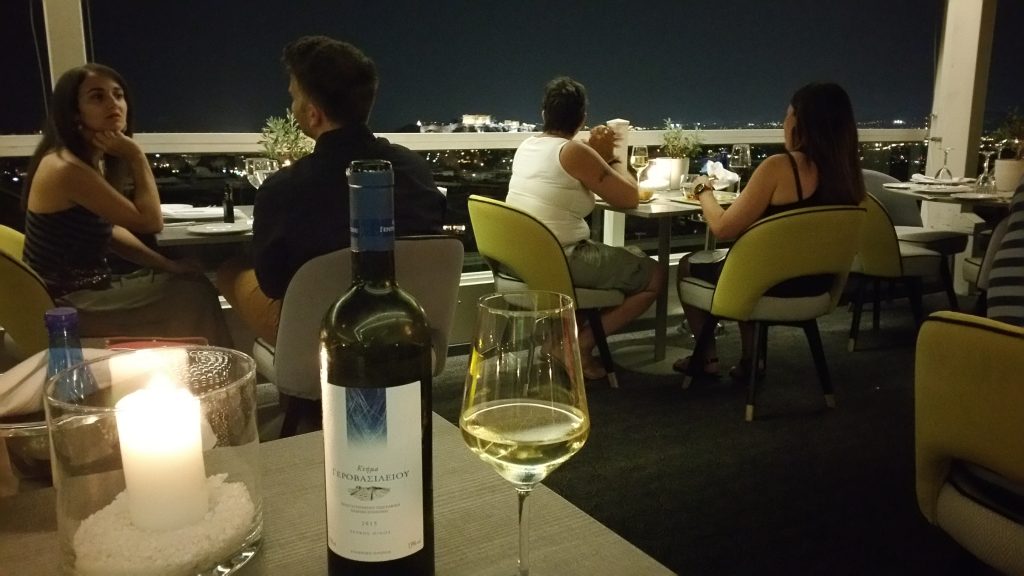 Vassilis Papagiannakos is the third-generation winemaker in his family. He was born into it as his grandfather started the winery in 1919. Today in Athens Papagiannakos’ daughter is studying to get her Master’s Degree in wine in Burgundy. Maybe one day, she’ll work with her father. Papagiannakos returned to the family business after making wine in the Peleponnese, with the mission to prove that the grape savatiano can make good wine. He built a state-of-the-art winery that is the first winery in Greece to have a bioclimatic energy saving building. Using natural lighting and natural ventilation, they save twenty-five percent on energy. In addition, the orientation of the winery to the sun and the wind means that a great breeze flows throughout.

The first harvest after the winery was completed was in 2007. The Papagiannakos vineyards are in an area that gets a minimum of 320 days of sunshine with hot and dry summers and mild winters. The bush vines are planted in limestone soil and yields are small due to the lack of water and irrigation.  Papagiannakos grows a variety of grapes, from malagouzia, assyrtiko and grecco de tuffo to aggioritiko, merlot and cabernet sauvignon, and of course, savatiano, the historic variety of the region. The savatiano vines on the property average sixty years old. Traditionally, savatiano was aged in amphora, sealed with pine resin, resulting in retsina. Papagiannakos produces premium retsina but also bottles savatiano as a dry white wine. What is unique is that the wine ages like assyrtiko. A young savatiano is very crisp, with mineral and petrol notes while it picks up more aromatics as it ages. The 2015 savatiano is very crisp and mineral-driven having seen no oak. Papagiannakos also produces a barrel aged savatiano that shows a hint of vanilla on the back palate.

Athens has options. Meliartos is the place to go for breakfast, lunch or a snack but for dinner, there are quite a few choices. The restaurant at the St.George Lycabettus Hotel offers a dizzying view of the city at night. If you can take your eyes off the view, you can sample dishes highlighting the flavors of Greece. Always in search of somewhere the locals eat, somewhere off the beaten path, somewhere tasty, a friend recommended XH. MA. Steakhouse which is located in the middle of a residential neighborhood in Athens.

For the math and science geeks, the name might already make sense to you. XH is for chemical and MA is for mathematical. It is named by the two brothers who own the restaurant who have degrees in these fields. They had opened their first restaurant eleven years ago and XH. HA. was opened two years ago. Raised by a butcher, the brothers opened XH. MA. as a steakhouse, offering a large and diverse selection of grilled meats, from lamb ribs to beef. Small plates include tiro kafteri (cheese with hot chili peppers), eggplant salad with cheese, cheese pie with honey, arugula with anthorito (cream cheese), tomato, croutons, sesame seeds, honey and balsamic sauce, grilled mushrooms, grilled mastello cheese, salads and more.

In essence, Athens is a place to discover. Go with a willingness to explore, a palate to be pleased and a thirst for something different. Ready to head to Greece? Book your ticket and pack your bags. No matter where else you go, be sure to spend a few days in Athens and explore the historic city.

Taking Romance and Creativity to the Dock…