Transitioning from meat to plant based veganism, consciously

The story of how I chose to be primarily vegan in a meat-eating world started in the not-too-distant past. But in the vein of honesty, the coronavirus is definitely making it harder not to salivate over the thought of a grass fed steak… and my need to want to support local farmers.

Growing up, my households were middle class and lower middle class. My father was an entrepreneur and owned his own trucking company called Garcia Trucking. My mom was a nurse. Two separate households as their divorce was finalized before I hit my first birthday. We, my older sister and I, spent countless days with grandparents and our aunt an uncle where the options of cuisine were largely dependent on budget. From green bean casseroles smothered in sauce, chicken with corn and Rice-A-Roni, sloppy joes, Chef Boyardee, Hamburger Helper, bacon, spaghetti—lots of spaghetti—and on rare occasions, fish sticks—or if my stepmom was feeling fancy, shrimp cocktail (frozen but we never knew the difference), our meals were whatever was cheap and could feed multiple hungry mouths. Point is I’ve eaten my way through the red meat/pork/poultry market since birth and making a transition in high school to going vegetarian once I became more aware of how meat was produced was a process.

Fortunate to be part of an education social experiment, my 11th grade English teacher Mister Olsen (also the basketball coach) launched a course called Environmental Studies. The course would focus on global warming, sustainability, plant-based eating, and understanding the impacts of our individual carbon footprints. It was fascinating to say the least. The course opened my eyes to how important recycling is, understanding what items are biodegradable, and eventually becoming educated on exactly how that food we inhale so readily is made. Let’s just say the last time I really enjoyed eating chicken I was sixteen years old.

That course educated me on more than I could have anticipated, including the realization that in the 1970s and 1980s our food drastically changed. We went from growing organic gardens with fresh produce to canned goods, Wonder Bread, Hostess Donuts, processed foods, MSG and GMO’s. That massive leap led to food allergies, gluten intolerances, and a system of youth—now adults—that have awful eating habits. Hence why I diverted to my high school teaching of that experimental class.

Mister Olsen had a profound impact on me. From ages 17 to 20 I made the choice to become vegetarian. It wasn’t easy but it was based on the idea that perhaps my decision to eat a different diet could in fact help save the environment and put an end to animal cruelty. And then I dated a boy. And that boy’s dad made a steak on the grill and the smells penetrated my senses like a desperate lover in need of touch. And the A1 sauce! Oh the A1 sauce. 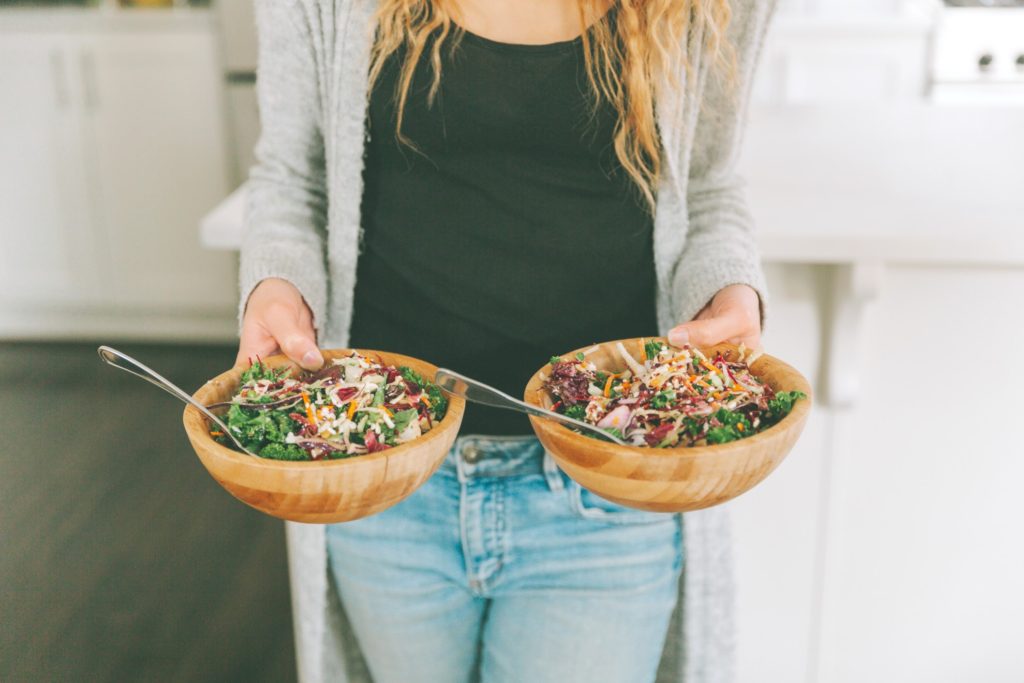 I caved. My days of vegetarianism would be behind me even if I did adopt the diet 85 percent of the time. The moment I left my dad’s house at 19 years old, I got my first apartment in Burbank and ventured into the local grocery market, Handy Market (subsequently still there today). The produce aisle was like nothing I’d ever seen. Rows of greens, orange, purple, vegetables, herbs, fruits I didn’t even know existed beckoned and my curiosity to try everything I saw took hold. That’s when I started cooking. And I cooked healthy. I quite enjoyed the flavors of real, farm fresh produce, meats and sustainably caught fish. I started experimenting with healthier meats and seafood until eventually, I was gorging on salads and fresh cut carrots and jicama, feeling abundant in energy.

Now let’s fast forward. My independence as a young woman living on my own in my home town of Los Angeles gave way to lifestyle habits that have served me well. From working out a faithful four days a week to making smart eating choices, I adopted some rather positive routines. However living in LA also makes one undeniably persuaded by whatever latest food trend filters through the city causing us all to behave as if we needed some culinary direction. Alas, veganism began to trend.

It started when I met and worked out with some well known MMA and UFC fighters that are plant-based athletes. They taught me about the multitude of options in terms of sourcing proteins from legumes, fiber rich foods, and what supplements to take to maintain proper nutrition. It was eye-opening to say the least and I had to think if trained pros can go round-after-round in a cage, maybe veganism was something I could look into and adopt.

As I entered into my thirties, pregnant and thinking very differently about food and how it’s produced, it was then that I cut out poultry. The thought of handling raw chicken was a mass deterrent. And then my daughter was born and eating clean and healthy was the only option if I wanted to be at my best. Then I cut out shrimp. And as my daughter got older, and my magazine grew, the invitations to dine with some of the world’s best chefs globally and locally came in droves. Making choices to eat smart while feasting with the best of the best has proven to be challenging, when I did the research on the benefits of eating a plant-based diet, I knew those challenges would only heighten.

The transition to eating vegan began last November. Months of reading, learning the toll meat production takes on the planet, carbon emissions, and I stuck with it because it was something directly within my power to positively affect the environment. That said, beef and bacon are delicious. Like really, really delicious.

According to the National Geographic, producing beef uses 20 times the land and emits 20 times the emissions as growing beans, per gram of protein, and requires more than 10 times more resources than producing chicken. Greeneatz wrote that livestock farming produces from 20% to 50% of all man-made greenhouse gas emissions.

But transitioning to eating zero meat has been less of a reigning success than I had hoped. It’s hard. And my body craves it so once in a while I give in, but the pandemic we’re currently in has made the once-in-a-while a bit more frequent. Maybe its stress eating. Maybe it’s hunger. Maybe its because I actually need iron, but whatever it is, I’m steadily ascending upwards back towards more plant-based eating. I just feel better when I eat vegan. And I love the planet I dwell on.

With brands like the Impossible and Beyond Meat burgers making waves into the mainstream marketplace, there are smart alternatives that use less water and gas emissions lending to a happier planet, and a healthier you. So maybe you don’t totally make the leap to being a vegan, but you can make far more educated choices and commit to eating less meat and when you do, commit to only buying grass-fed beef products, sustainably caught fish and farmed poultry, choosing to up your veggie intake, and cutting out all of that processed junk making you physically sick (even though yes, I know, chips often equal happiness).

All of this to say, you don’t have to cut out all meats and fish to do something good for our earth. Choosing to cut back on your weekly consumption can make an enormous difference (see Shrink That Footprint).

So while I toggle between mostly vegan and indulging every now and again in grass-fed and sustainable meats, I’ve avoided dairy (my favorite thing), and have already cut out all processed foods. If it’s not made right I don’t do it, but I can’t say I’ll never gorge on Taco Bell or indulge in a jar or two of Frito-Lay queso dip because then I’d be lying. I too have my limits.

While yes, I do crave a grass fed cut of filet mignon perfectly medium rare or my utter indulgence foie gras, making the transition to a plant-based diet has changed how I feel mentally and physically. My once frequent headaches are non-existent (unless I don’t sleep but that’s an entirely different story and one I’ll likely write about soon), my joints and bones hurt much less, I no longer have swelling or stomach aches, and I have more clarity and energy than ever before. It’s not for everyone but it is something everyone should try more often than not.

Brands I Can't Do Without

So in my journey of going vegan and cutting out the junk, I will share some of my favorite finds that will appeal to even the most foodie-centric eaters.

Jackfruit. Jackfruit. Jackfruit. There is barbecue, curry, chile lime seasoned jackfruit, and plain in a can (at Trader Joe’s) but consistency-wise this is on par with carne asada and pork. It’s ideal in a taco, burrito, salad, or bowl. My favorite brands Jackfruit Company, No Evil Foods.

I’m a BIG chips girl so when I also cut out corn, I was craving nachos for like two months. I have found ways to curb my salty crunchy cravings with low calorie snacks (some vegan, some not) that are way healthier and filling.

A New Year’s Feast Worthy of the [Greek] Gods Written…