Bringing Japanese and Peruvian Cuisine to Hungry Diners in NYC

Sen Sakana, a Japanese-Peruvian restaurant serving a variety of sushi, sashimi and a fusion of culinary breadth in Midtown, opened this week after a long-awaited stretch. On a windy Wednesday we attended a tasting while the flags of the Yacht Club next door flapped regally as if to signal the important arrival of their neighbor. The streets outside were darkening but once we stepped inside the restaurant, the grey mood of the street dissipated as we were ushered in. The overall look and feel of the interior lets you know that you’ll be taken care of. The aesthetic is typical of an upscale Japanese restaurant: slatted wood wall fixtures, dark furniture, and a neutral, elegant palette. The Peruvian influence was apparent right away as well. Situated behind their beautiful bar, a gorgeous bartender hands us a Sen Sakana Pisco, the restaurant’s take on the traditional Peruvian cocktail made with egg whites, and a tequila and pineapple cocktail with bitters that pleasantly stung the back of our throats.

While the vibe of the restaurant is refined, the celebratory tasting was packed to the gills with friends, family, and a Midtown after-work crowd. Because the layout is open, guests and servers alike can circulate easily between the three main rooms. There is the front dining room and bar, an elevated mid section with an open sushi bar, and a private room in the back for parties. As we chatted in line for the sushi bar, trays of scrumptious hors d’oeuvres and intricate cocktails spun past us, allowing us to learn a bit about the restaurant’s origins. 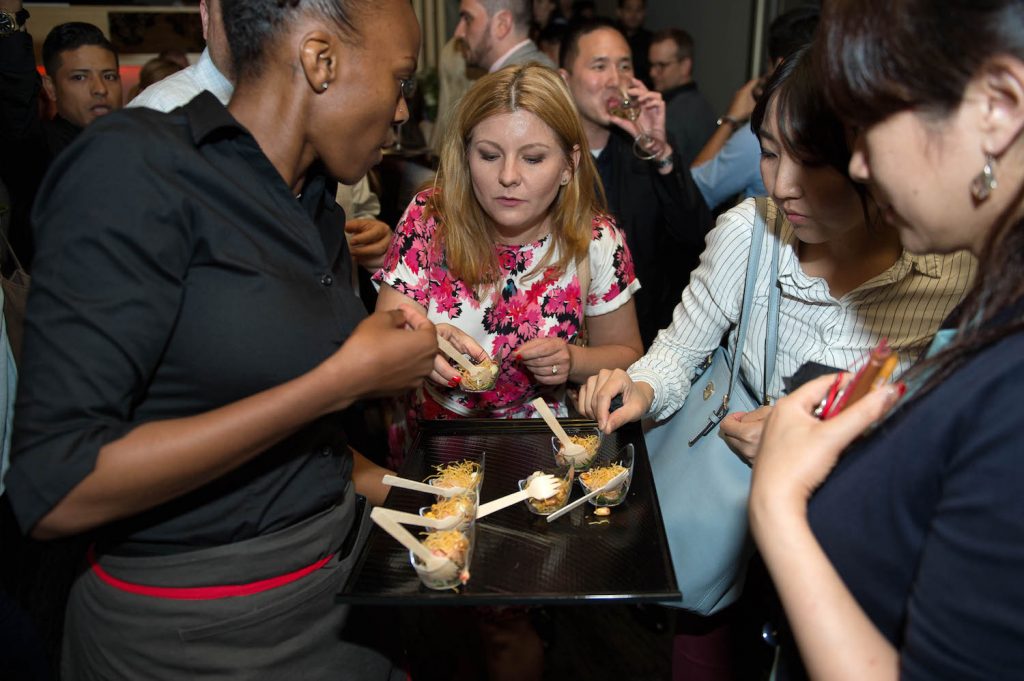 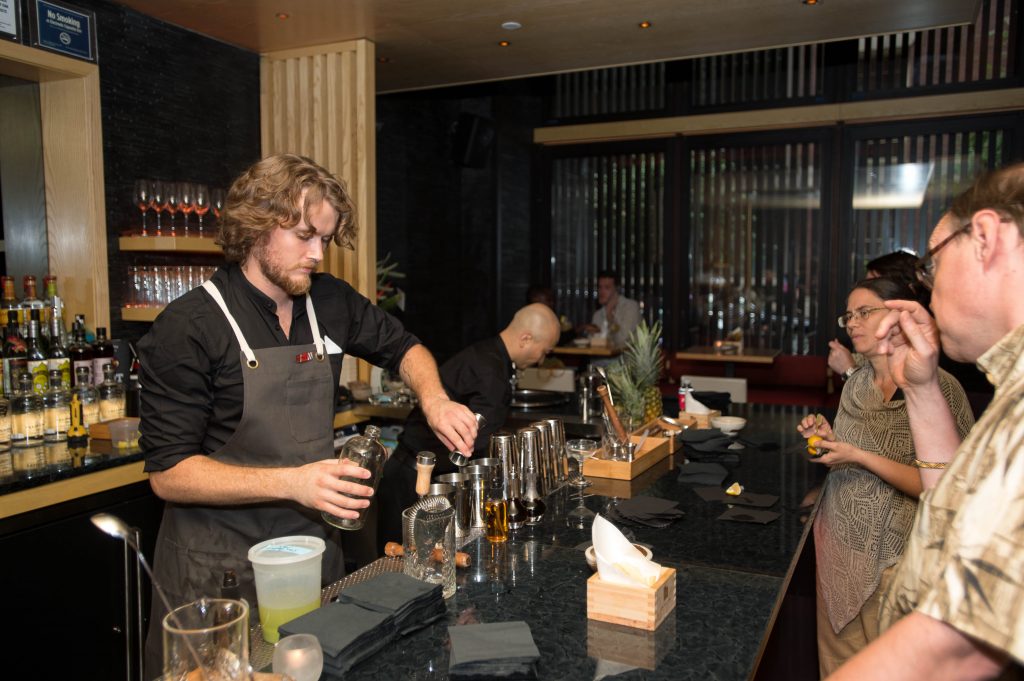 Over a hundred years ago, many Japanese migrated to Peru, continuing over the years and the two cultures combined. That was ever apparent in their culinary creations that blended both country’s coastal access to seafood, leading the the creation of a called Nikkei. While Nikkei may not explicitly refer to Japanese food fusing with just Peruvian culture, the combination is so natural and harmonious that most people understand Nikkei to mean precisely that. Lima, Peru, is home to several notable Nikkei restaurants, but Sen Sakana is the first in New York. Its size was made possible by purchasing three stores (one of which was a barber store that had to finish out its lease), and then designing one large open space.

Well worth the wait, the culinary magic that came spinning out of the kitchen in bite-size pieces was not only delicious, it was beautifully composed. Most of the hors d’oeuvres were carefully constructed in a way that seemed true to Japanese refinement. The very first bite was a tiradito called Maguno. A tiradito is like sashimi but with a sauce. In this case, the sauce is made of jalapeño and cilantro showcasing a vibrant green. The fish is bigeye tuna garnished with a bean sprout and pickled radish. 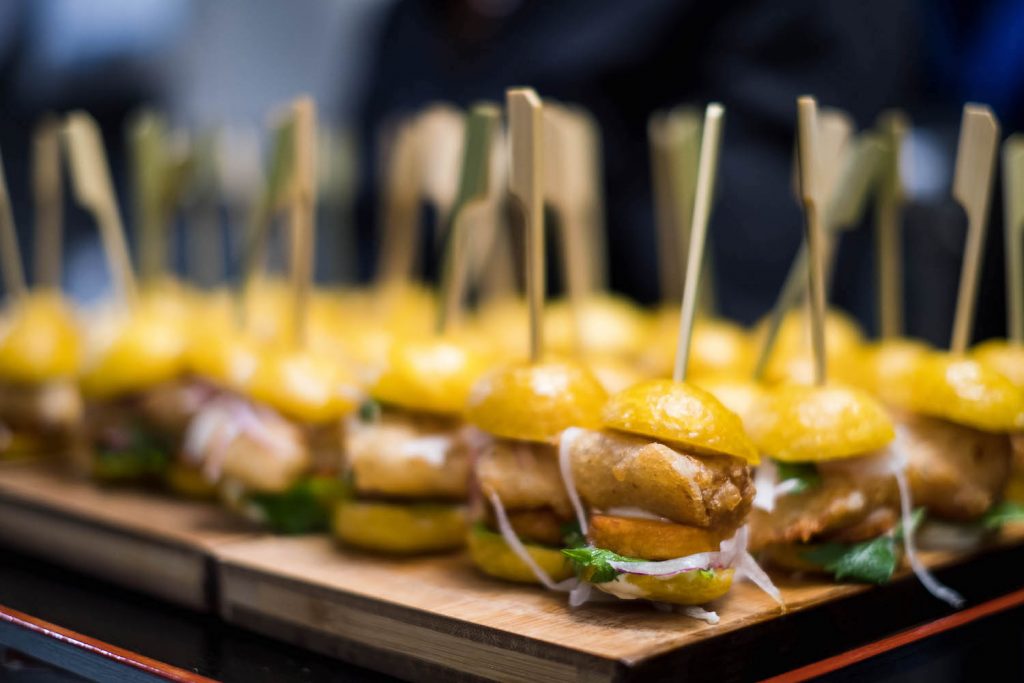 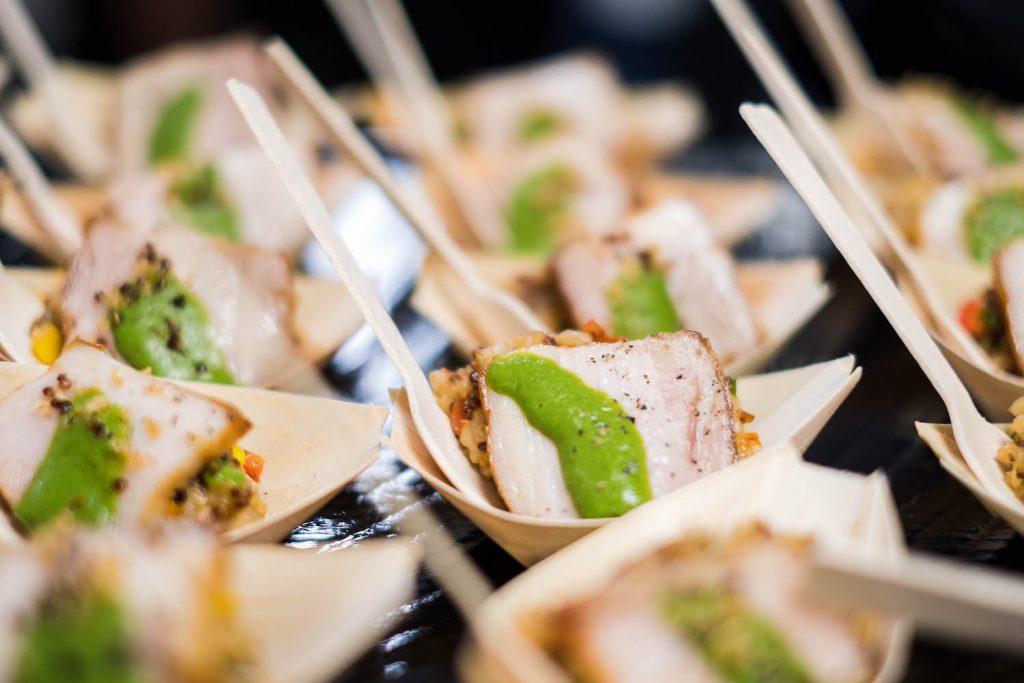 The tiny chicken empanadas were one of the most South American-influenced bites and also one of the best. For me, the tastiest snack was the Chicken Nanban, a miniature take on an entrée from their menu. It was a fried chicken skewer with Japanese potato salad on top. Yum! The fried chicken is bathed in a sweet and vinegary barbecue sauce with a quinoa-crunch so perfect it could only be of the deep-fried varietals, while the potato salad offered a completely different yet complimentary texture. Another star was their interpretation of a spring roll, which was not much larger than a piece of rigatoni pasta laid on its side, but the top was open and filled with salmon. There was a scallop version as well. Naturally, I tasted them both and the quality of the fish was so clear from the first bite.

The abundance of fish on the menu was handled flawlessly. The name Sen Sakana translates to 1,000 fish. Eventually, the sushi line opened up for us, and a server explained the different types of sushi. The Andes Yama Roll caught my eye first because atop a glossy slab of salmon was an adorable tiny baby beet slice and a sprinkling of minced chive, and, of all things, a gooseberry. It tasted of Shiso Maki (a Japanese leaf whose flavor popped up in many dishes throughout the night) and other rich complexities. The inside of the roll contained snow crab, asparagus, and the shiso.

It’s always a pleasure to watch people in their element, especially when it results in enjoying incredible food. The skilled sushi chefs rolled every dish expertly and made beautiful cuts of fish. Nowhere was this more apparent than in the back room, where even more sushi and freshly sliced sashimi awaited us.

The up-tempo music stopped in the middle of the event, and a wooden cask of sake was opened, then ladled into beautiful wooden drinking boxes (masu) that were emblazoned with Sen Sakana’s name and geometric logo. The overall aesthetic of corners and squares showed in every detail. Over sake, we learned from a realtor that the original basement was dug extra deep to create a sub-basement for the catering department and prep kitchen, which I believed when I saw the kitchen staff emerge from below. There were many hands on deck, and it was a pleasure to see them pause to celebrate, raising their glasses in a group photo. My favorite moment was overhearing a chef who had come out of the depths of the kitchen, ask for a special plate of food be sent to his family and little boy, who were seated near the entrance. The pride in the work was evident in every meticulous dish, but to overhear the chef sharing that pride with his family was gratifying. The staff and bartenders were beyond gracious. The event previewed the food of Sen Sakana, but I also got a taste of the excellent hospitality. The staff was fast and efficient and knowledgeable, and they moved gracefully around a crowded room. The bartenders were slammed the whole time and but I saw only patience exude. The restaurant can seat almost 200 guests, and Sen Sakana is more than prepared to serve them.

Make a reservation or visit them at: www.SenSekana.com