A New Year’s Feast Worthy of the [Greek] Gods

For a room whose ceiling is higher up than most 3-story buildings, the foyer in The Federal off Pine St. in Downtown Long Beach is a warm reprieve from the chilly air outside. A muted orange glow emits from the bulbed alcoves along the wall and above. For all of its vastness, the room is empty save for the telltale clinking of stemmed glassware and soft words of scattered patrons at nearby tables. I offer my name to the hostess behind the front desk and she directs me over to a small group of people gathered around a woman, clad in 1960’s speakeasy garb at the bar making drinks.

The bartender, whose name I learn is Brittany, is pouring drinks. Taking an empty stool, I order a dirty gin martini straight up. As Brittany goes to work, the glittering sequins of her dress refracting light against the chilling cocktail glass between us, I take in the rest of our small groups’ surroundings.

It should be noted the Federal Bar’s original foundation was once the Security Pacific National Bank established in 1924. When the space was eventually converted in 2013, much of the interior—frescoes along the ceiling, ornate wood paneling—remained. The whole setting makes for a transportive experience, almost haunting if only due to tonight’s unusually light customer base.

The careful thud of glass on the bar top brings my attention back to Brittany and her sequins, the classic gin martini between us. Nodding my thanks, I lift the crystalline lip to my own and sip. Fleeting saltiness, floral notes, and a dry coolness: perfection. 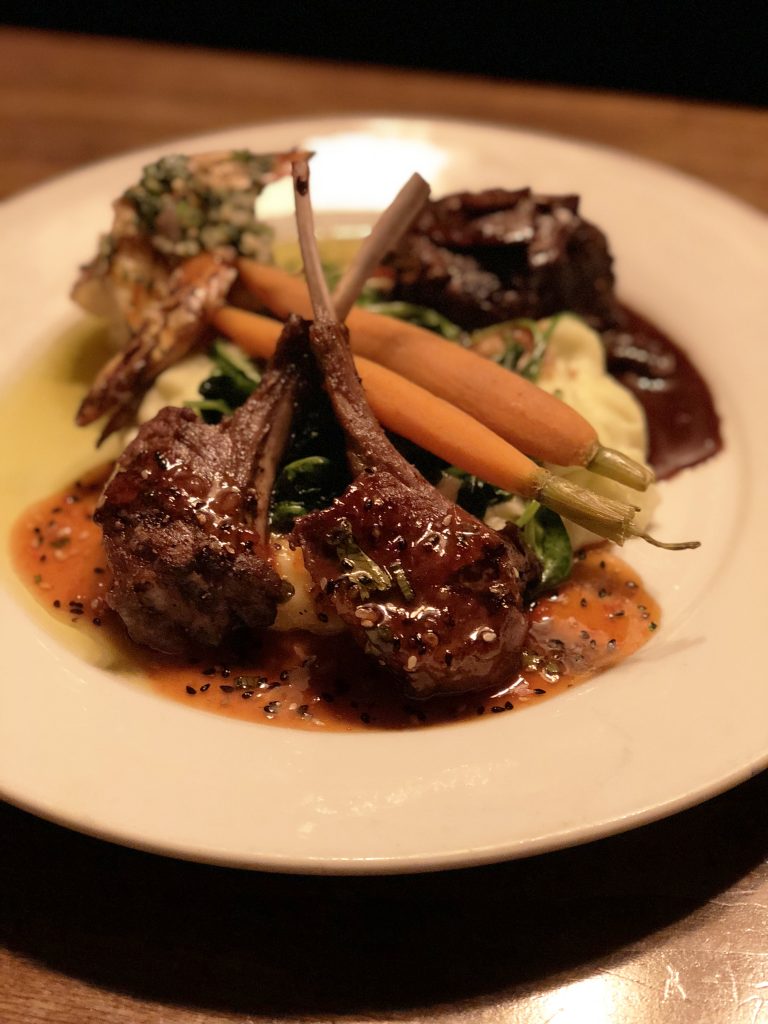 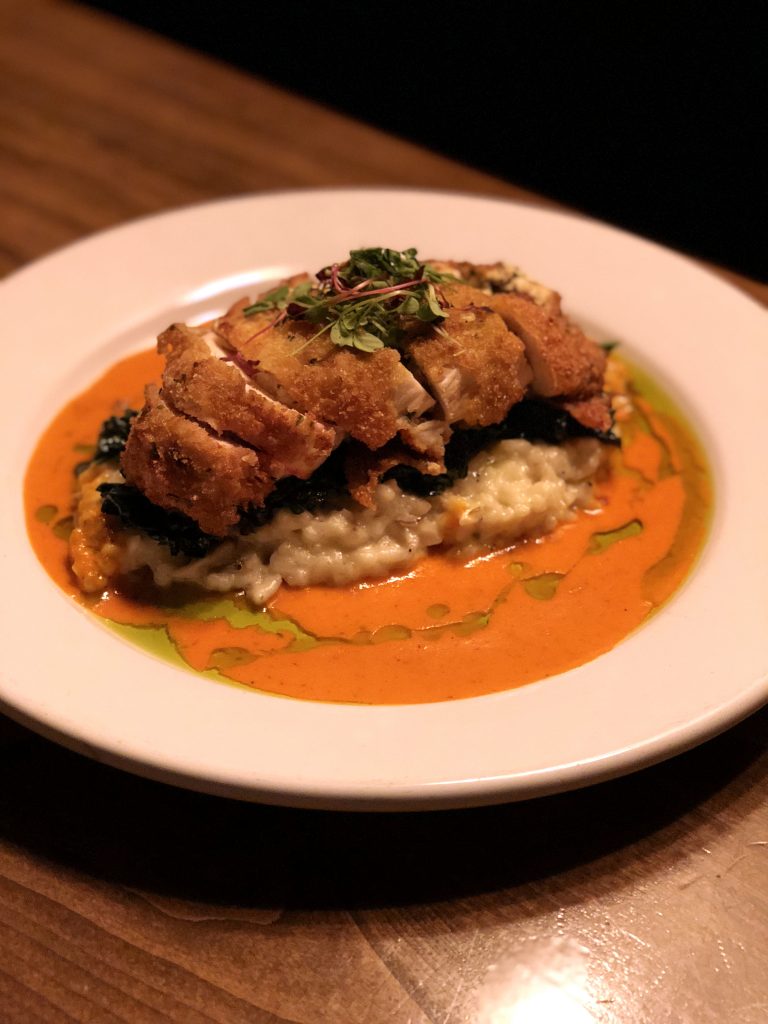 Our lips part, breathless. Before I can enjoy another martini, the rest of the group are called over to a table at the back of the room. We take our seats as the evening’s hosts introduce tonight’s menu created by executive chef Matthew Fitzgibbons, a New Year’s Eve variety showcasing flavors across a wide range spectrum.

Tonight also presents a rare opportunity to sample a selection of the Georgós NuGREEK Wines out of Sonoma Valley. Our genial host Henry explains that they use California winemaking methods, both using 100% greek grapes as well as Greek/US blends, all made and finished in Sonoma (100% greek fruit for the Ios, Santorini and Mykonos, and blended US/Greek fruit for the Ithaka). The process involves hand-picking and triple sorting the grapes, emphasizing reducing naturally occurring histamines in wine. Essentially, you’re consuming a better quality wine without having to worry about a headache in the morning.

The first Greek wine we’re introduced to this evening is the Santorini: Sophia’s Smile. A pale gold by the table candlelight, the Santorini is an un-oaked Greek grape wine produced in a Sauvignon Blanc style. Shy and light-bodied, aromas of candy and melon fill the nose upon closer inspection. Taking a sip, the aromas take hold of a flavor profile hinting at tangy citrus and a light minerality on the palate.

The first entrée of the evening is the Salad of Wild Baby Field Greens. Amid the swathe of leafy foliage lay a bouquet of colors: roasted yellow winter beets, specked herb goat cheese, pink grapefruit, and pickled red onions. Fastening it all together is a balsamic rosemary pomegranate vinaigrette, which never finds temptation overstepping its role. It is at once both sweet and savory, thanks in no small part to radicalized cubed polenta turned into makeshift croutons—a last-minute decision which succeeds with great aplomb.

The second wine of the evening is the Ios: Aphrodite’s Kiss, a mischievous rosé dappled in a purplish pink hue. No shy maid, the Ios’ legs lay in an inviting languid criss-cross across the inside of the glass bulb’s curvature. A soft strawberry perfume reminisces on the nose. Sipping, the Ios waffles between a light dryness riddled with fleeting minerality and surprisingly fruit-forward contours. In the latter, apples and citrus mingle, awash with a pleasant light creaminess. It is easily the favored wine of the evening.

Due to the purpose of tonight’s meal, the kitchen has opted to serve us all at once, à la family style. One after the other, four white, rectangular dishes are set out in front of us boasting of four individual dishes.

Using a supplied tong, I just barely manage to secure a thai bbq New Zealand lamb chop and a small helping of sweet basil parmesan potato puree. Taking the first of several bites, the lamb chop is wonderfully tender and flavorful. Paired with the puree, it is a hearty meal to be sure, especially with the addition of wilted spinach and unassuming baby carrots. However, in terms of remarkability, there isn’t much one could add beyond its being well-prepared and tasty. Some might consider that a failure, I consider it to be a neutral gesture.

Next up is the herbed goat cheese stuffed chicken breast, with wild mushroom risotto, roasted red pepper cream, sweet basil oil, and braised black tuscan kale. This is a remarkable dish. Waves of flavor fill the mouth and hum in tandem between bites of chicken and kale. Though the creaminess perforates the palate on three fronts, it never overstays its welcome. The kale, for its part, crunches right along without a care in the world adding texture to the dish. 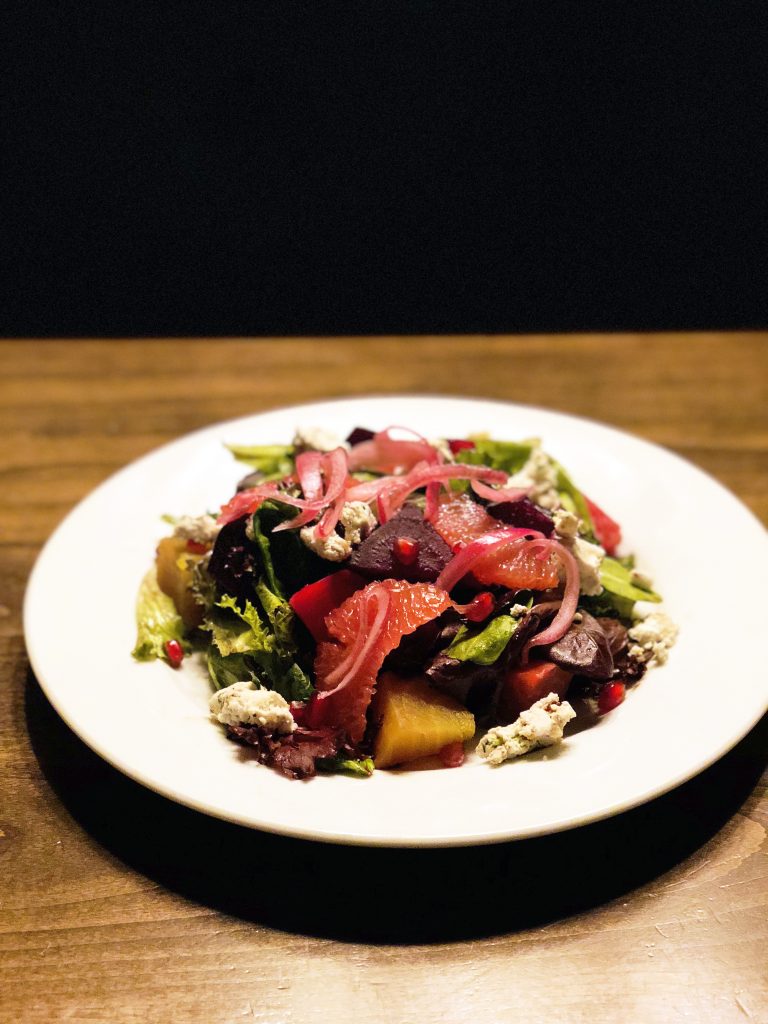 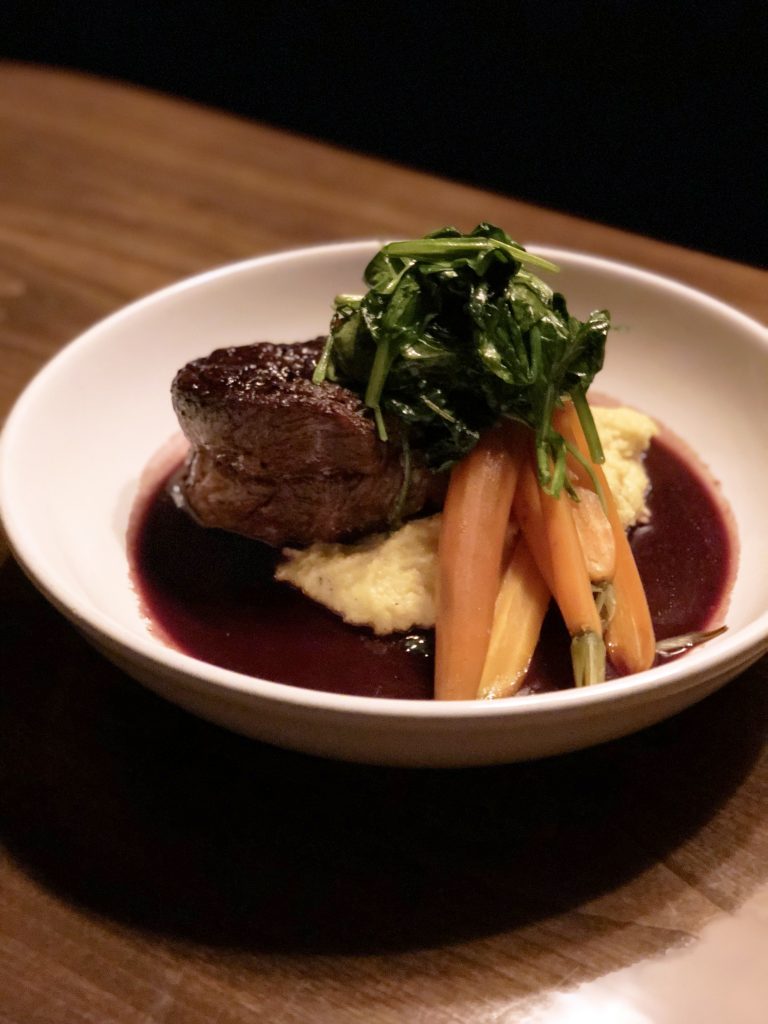 Somewhere in the meal, my glass is filled a third time. The Mykonos: Wine of Hercules is a Georgós wine made in the style of Greek Pinot Noir. Heavy, heady, and red, this is the wine you might hesitate to go all 12 rounds with. A few well-placed whiffs places aromas of caramel and warm cocoa. Taking a sip, it takes a few moments for the more complex notes to make an appearance: cocoa again, but also earth, coffee, soil, and freshly ground pepper.

In an interesting twist, I found the Mykonos paired best with the spicy heirloom tomato shrimp broth of the Pan-seared Pacific Sea Bass. Unfortunately, I wasn’t able to try the fish itself, but did get enough of the broth with a coupling of fingerling potatoes to surmise the celebrity couple of the table.

The fourth entreé of the evening is the Warm Almost Flourless Chocolate Cake, paired with the luscious Ithaka: Penelope’s Spell. A 2014 Supercab, the Ithaka boasts a powerful dark purple hue surpassed only by its imposing heaviness. On the nose, chocolate and cocoa again. A few sips reveal a velvet-soft curtain of dark fruit, caramel, mocha, and soil. A wine you could easily drink for quite some time is what the Ithaka portends to be.

The cake is as relatively straight-forward as its name suggests: a triangle of chocolate cake topped with mixed berries, a leaf of mint, caramel drippings, vanilla and chocolate sauce, and a dollop of whipped cream. It is, in fact, warm. However, I can’t help but wonder if the power here lies more in its “almost flourless” subtext, or the fail-proof accoutrements of mint and mixed berries. In any case, it’s delicious, if not familiar.

Nursing the last few sips of the remaining Ithaka and looking around the table, the thought comes easily: tonight’s New Year’s Eve menu could easily have been a feast fit for the mythological Greek gods of yore as they welcomed the new year.

Be sure to make your reservation before the year rallies and bids you adieu.

The Federal in Long Beach is throwing New Year’s extravaganzas on all three of its floors including the main dining hall, The Federal Underground, and The Parlour Speakeasy

The Federal: A 3-course prix fixe dinner package, including one alcoholic beverage and champagne toast at midnight $65 and BY RESERVATION ONLY

Georgós Wine, an emerging wine company that has taken the best of American innovation and Greek tradition and put it into a bottle right in the Sonoma Valley, is proud to launch its latest vintages. The brainchild of engineer-turned-wine-company-founder Georgós Zanganas, Georgós Wine brings five wines to market, available direct from the winery, at Whole Foods in Northern California, and at fine restaurants in San Francisco and Los Angeles.

It was 8.30pm. The hinterland when it is too late to drink horchata and too early to get lost in booze and tapas. Cava Siglos just looked too tempting, with its elegant glow radiating out, into Calle de Caballeros. My eyes adjusted to the twinkling delights in front of me as I watched the bar man muttering to himself, uncorking a fancy looking bottle of rioja The first row of spirits was a guided world tour of the history of gin. And above that towered a walled labyrinth of sherry, whisky, everything – all prize fighters of distilled majesty.