It’s that time of year when sitting around on weekends, when binge-watching an incredible lineup of well-written, deeply impactful shows seems like the right thing to do. This past month I’ve come across a slew of shows that make binge-watching all too entertaining—and necessary—so saddle up, settle in, and get ready to overstimulate your noggin.

Mrs. Maisel is indeed marvelous and Midge, played by Rachel Brosnahan is the kind of zip to the brain we all need extra doses of. Written by the ever-so-fast-talking Amy Sherman-Palladino, Amazon Prime’s The Marvelous Mrs. Maisel is a wonderful departure from The Gilmore Girls (not that I have anything against TGG). Mrs. Maisel is crass in a perfectly tailored dress, hair done to the nines, and all the jewelry, upbringing, and social etiquette one was raised to embody in the 1950s and she curses like a sailor. Admittedly, I was resistant to watch this show for fear of being painfully disappointed if it didn’t live up to all the hype, but—the hype doesn’t even do it justice! Yes, ladies and gentlemen, this beauty of a dame makes “fuck” the most sophisticated vocabulary word you’ll ever hear. The show is so flawlessly cast with David Giuntoli, Tony Shalhoub, Michael Zegen, Marin Hinkle, and the brilliant Alex Borstein.

From the pilot episode, you’re marveled, and good ole side-splitting-f-bomb dropping Midge Maisel, ball-busting Susie Myerson, astute Abe Weissman, bewildering Rose Weissman, the lousy-but-redeemable Joel Maisel, and the glimpse into the ever-so-cool but painfully tortured comic Lenny Bruce, this show will have you by the-heart, soul, gut, and yes, by the balls. Sherman-Palladino takes her ability to write dialogue like no other and spins it so seamlessly into this tale of one remarkable stand-up comic who changed her life story into one for the books.

STORYLINE: It’s the late 1950s and Miriam “Midge” Maisel has everything she has ever wanted — the perfect husband, two kids and an elegant apartment on New York’s Upper West Side. Her seemingly idyllic life takes a surprising turn when she discovers a hidden talent she didn’t previously know she had — stand-up comedy. This revelation changes her life forever as she begins a journey that takes her from her comfortable life on the Upper West Side through the cafes and nightclubs of Greenwich Village as she makes her way through the city’s comedy industry on a path that could ultimately lead her to a spot on the “Tonight Show” couch. The series was created by Amy Sherman-Palladino. 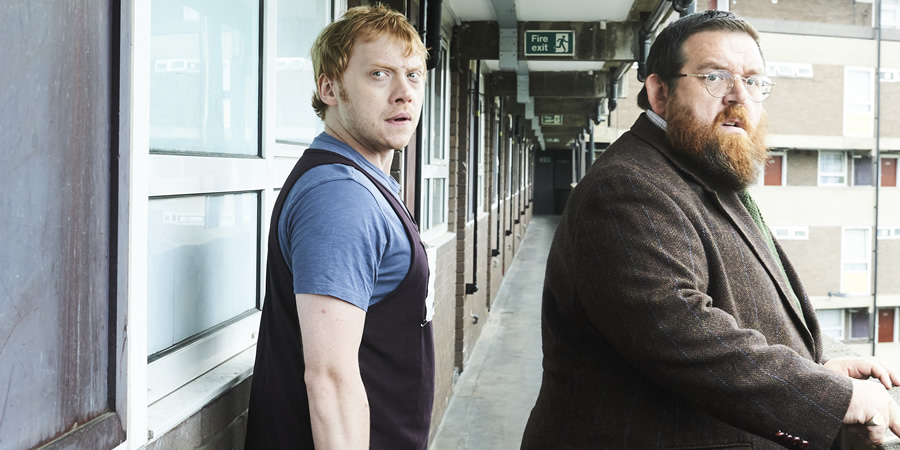 You know how Hermione and Harry had a life after Hogwarts but you really wanted to see Ron Weasley take his rightful place in the post-Potter world? What, just me? Anyway, the awkwardly funny, sarcastic Daniel Glass played by Rupert Grint partners up with the worst oncologist ever, Dr. Iain Glennis played by the genius Nick Frost teaming up in Netflix’s series, SICK NOTE. The cast consists of an array of colorful talent including the lip-injected, gorilla-loving Katerina West (Lindsay Lohan), the foul-mouthed, sexually depraved CEO of West Insurance Kenny West (Don Johnson), the adorable-but-super-twisted Linda (Marama Corlett), and the fiercely-odd Becca Palmerstne (Pippa Bennett-Warner). The story begins with Glass finding out about his cancer which transforms his hum-drum sedentary life. For a guy who is lazier than most anyone you’ll ever meet, Glass’ time playing video games with his VR bff Will-5000, skipping out on work, not being a good boyfriend suddenly shifts when people start treating him nicer because of cancer. Through mishaps, unseemly behavior, awful events, a slew of foiled plans, a fair amount of cursing, and seeing Grint slip out of the Weasley role and into his own, this show may not be rocket science but it’s damn entertaining.

STORYLINE: Sick Note is the story of Daniel Glass (Rupert Grint), a compulsive liar, who’s stuck in a failing relationship and a dead end job, where he is under the thumb of his irrepressible boss Kenny West (Don Johnson). And just when things couldn’t get any worse, he’s diagnosed with esophageal cancer. However, everyone starts to treat him better because of his diagnosis and suddenly Daniel finds he has a new lust for life. But then he finds out he was misdiagnosed by the most incompetent oncologist on Earth, Dr Ian Glennis (Nick Frost) and that’s when Daniel has a big decision to make: come clean and go back to his old rubbish life, or keep this new information a secret and pretend to be ill. He decides to go for the latter but very quickly the lie spirals out of control and both Daniel and Dr Glennis have to spend all of their waking lives trying to prevent the truth from getting out.

Julie Roberts is no stranger to incredible female roles (Mystic Pizza, Pretty Woman, Erin Brockovich, Stepmom, August: Osage County, Ocean’s Eleven/Ocean’s Twelve, Wonder) but her role as Heidi Bergman in Amazon’s Homecoming is by far her most fierce role to date. Leading a therapy-driven reintegration program for soldiers transitioning into civilian life— starring alongside Bobby Cannavale (Colin Belfast), Stephan James (Walter Cruz), Sissy Spacek (Ellen Bergman), and Jeremy Allen White (Joseph Shrier)—Homecoming is the kind of show that is so quietly disturbing, it makes you question everything soldiers looking for ways to deal with PTSD must go through, AND the roles private military contractors play. It’s a haunting look at a flawed system, complicated relationships, and the lengths to which the government may or may not go to get soldiers to re-enlist … including wiping their memories of war.

It’s a story that opens up age-old questions of military motives, soldier support, and civilian life post-deployment. The story begins at a coffee shop where Bergman is a waitress. She’s confronted by DoD agent Thomas Currasco (Shea Whigham) asking her involvement with “Homecoming” and about a soldier, Walter Cruz. Bergman has no idea who he’s talking about and moments later, we see flashbacks of her giving therapy to Walter at a high-end facility called “Homecoming”. This first season is nothing short of interesting and disturbing, well-written dialogue, beautiful shots, and probing questions. They touch on complex pharmaceuticals designed to make soldiers—and anyone for that matter—forget about certain parts of their life. You will be anxious, you will be curious, and you will start to wonder exactly what kind of things men and women in the military endure without their knowledge.

STORYLINE: Good intentions. Erratic bosses. Mounting paranoia. Unforeseen consequences spiraling out of control. Heidi (Julia Roberts) works at Homecoming, a facility helping soldiers transition to civilian life. Years later she has started a new life, when the Department of Defense questions why she left Homecoming. Heidi realizes there’s a whole other story behind the one she’s been telling herself.

Our present world is one in which horrifying injustices became our reality. Women have climbed out of the shadows of abuse, assault, and sexism to take our rightful place as equals and in spite of the push back, we’re not going anywhere, but there are those who believe we are not equal. In a dystopian world that seems more terrifying than possible, Hulu’s original series, The Handmaid’s Tale explores the women of society that have but two purposes: serve their husbands or be a handmaid the husband has sex with (while the wife holds you down—aka rape) so you can get pregnant and carry their child. Sure, it sounds like nothing you’d willingly want to watch but this series based on the books by Margaret Atwood is something everyone should watch. It is so profoundly written, cast, directed, and shot it’s a series that will forever change you.

Starring the masterful Elisabeth Moss (Mad Men) as June Osborne—renamed Offred—Osborne is a woman whose family was taken from her as she was forced into Gilead, a dystopian society of extreme gender inequality to serve the family who picks her. Chosen by the Waterfords played by Yvonne Strahovski and Joseph Fiennes, Offred’s world is no longer her own. Beautifully shot, this series uses color and tone to infiltrate the storytelling with emotions and brilliant symbolism. Handmaidens are dressed in crimson red cloaks and garbs with white bonnets showing their place in society as servants and third-class citizens, while the deep emerald greens worn by the wives represent superiority and wealth. The men in this series are intensely written and yet in spite of the displayed demeaning behavior towards women, few have some, albeit little, redemption like Nick (Max Minghella). We follow Offred’s journey as she searches for the husband and child that were taken from her, while she and other handmaidens are brutally treated, some physically maimed most often by Aunt Lydia (Ann Dowd). With a stellar cast including fellow handmaidens played by Samira Wiley (Moira), Madeline Brewer (Janine), Alexis Bledel (Emily) and Amanda Brugel (Rita), the world of handmaid’s amid the society driven and ruled by men is messy, demoralizing, and heartbreaking—BUT like all good tales of oppression, there is a sweltering sea of revolution coming.

In both seasons, we see resistance, liberation, death, murder, strength, and truth trickle out one scene at a time and every episode, while horrifying, reveal that women refuse to be anyone’s servant.

STORYLINE: A religion-based autocracy has taken over most of the United States, renaming the country Gilead. In this country women are second-class citizens. Anyone trying to escape is punished. One such person is June, who is captured while trying to escape with her husband and child and is sentenced to be a handmaid, bearing children for childless government officials. As a handmaid, June is renamed Offred. This is her story.

The WWF was the coolest form of “fake” entertainment in the 1980s and while Hulk Hogan was going at it with Andre the Giant, there was a whole new posse of wrestlers forming and they were here to kick ass and take names. Introducing GLOW: Gorgeous Ladies of Wrestling. This Netflix original series is based on the real women of wrestling with a cast of badass, funny, complex women: Alison Brie, Marc Maron, Betty Gilpin, Sydelle Noel, Britt Baron, Britney Young, Kate Nash, Kia Stevens, Kimmy Gatewood, Rebekka Johnson, Sunita Mani. Brie gives one of her best performances to date playing the awkward, out-of-work actress, dowdy, adultering and incredibly tough Ruth—whose wrestling alter-ego is a Russian agent— opposite her best friend and woman who’s husband Ruth was sleeping with, the southern Belle, soap opera actress—now single mother—and wrestling sweetheart, Debbie. Both respond to a casting call for women looking for unconventional actresses for GLOW, taking them on the ride of their lives.

A cast of characters who are just as colorful as their wrestling personas, including the Welfare Queen, Syrian Terrorist, and the Old Grandmas, they decide to work with the grumpy and crass director Sam (Marc Maron), and the trust fund man-child but sweetheart and show producer Bash played by the wonderfully vulnerable actor/director Chris Lowell. Life for the ladies of GLOW is always fraught with challenges and setbacks but these wrestling babes continue to push through, get better at their moves and, much like the women they’re based on, have fans that are die hard, some weird, but all devoted! It’s entertaining and funny, smart and motivating.

STORYLINE: A look at the personal and professional lives of a group of women who perform for a wrestling organization in Los Angeles during the 1980s.

Other shows to add to your list: Mindhunters, Unbreakable Kimmy Schmidt, Chefs Table