As we maneuver through strange times, it seems a little hearty gluttony is on the menu. We’ve scoured our emails from friends who cook, friends who make magazines, and friends who love to eat and this twist on banana bread caught our eyes…our tummies…and our salivary glands!

Before sharing the recipe, we wanted to offer a little history of how banana bread came to be—or at least one version.

Banana bread was introduced to Americans in the 1930s as bananas were in plenty and baking soda and baking powder became baking staples for breads and cakes and the like. However its official debut appeared in many popular cookbooks including Pillsbury’s 1933 Balanced Recipes cookbook. As time went on brands and agriculture evolved, the popular Chiquita Banana company put together a cookbook in the 1950s and their take on banana bread—the sweet, potassium-filled baked bread— hit its stride.

And thus banana bread came to be an American favorite in households throughout the nation. Plus its the best way to utilize those yellow fruits when they’ve over-ripened (and a good excuse to use them when we’ve forgotten to eat them!).

My friends at The Bourbon Review put together the recipe below thanks to The G and M Kitchen. Not only is it a recipe that will make you salivate, it’s full of tasty bourbon and chocolate. Who can say no to that?! Time to get baking!

(cover photo by @natabene via Twenty20)

the yummy rendering of Pate Giltner 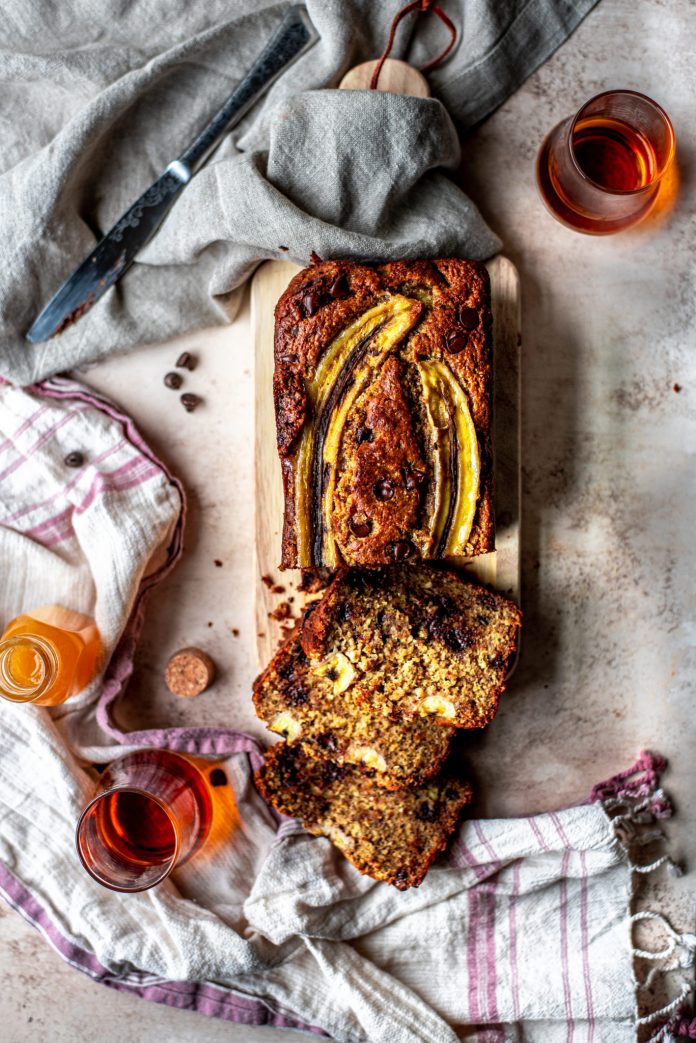 Recipe and Photos by Pate Giltner found here at www.thegandmkitchen.com

“This bourbon chocolate chip banana bread contains all my favorite things, bourbon, chocolate, bananas, and cardamom. It’s as satisfying as they come, plus its made with half almond flour and half all-purpose flour, so it’s also pretty healthy as far as desserts and breads go.

The best part of this banana bread is how easy it is to make. This recipe came to be because I had three bananas that had just gotten too ripe to eat, and the rest of the ingredients I had in my pantry. I added cardamom, bourbon, and chocoalte, because why not. They are delicious, and all make almost any dish better.

According to Bourbon Review, this pairs awesome with Basil Hayden’s Bourbon Iced Coffee .