LOVE BITES. A Play at The Elephant Theatre Company

4 weeks only thru March 2 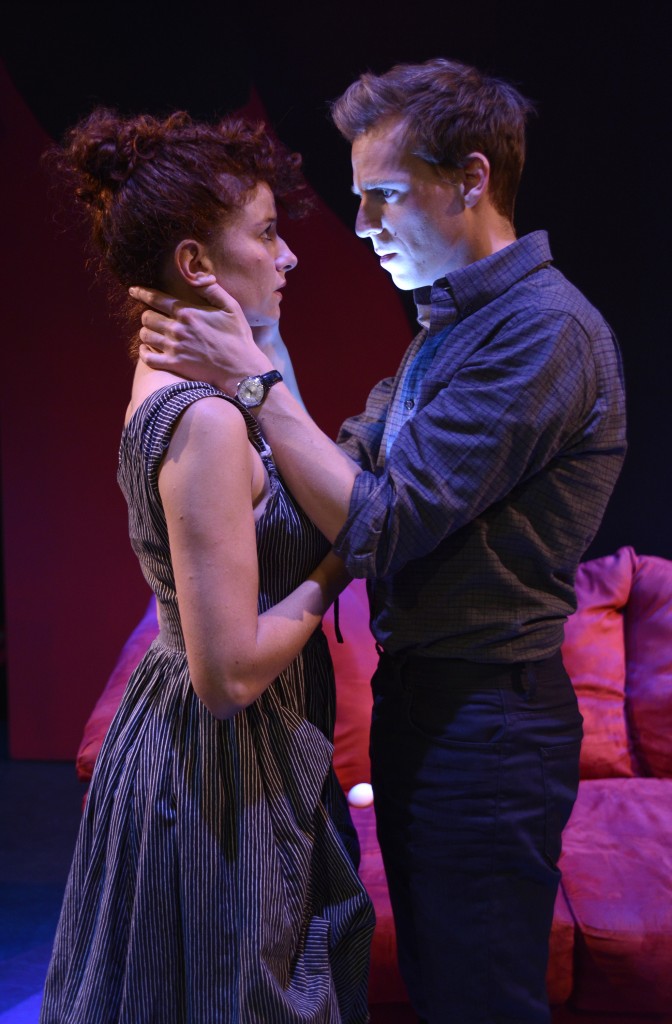 We’ve all been through some torrid relationship where we love entirely or hate entirely, been overly emotional, blown things out of proportion, made tragic mistakes that cost us the ones we love, or – if we”re lucky – resulted in learning to just laugh it all off as “experience”, a “life lesson”, or the reason you won’t make the same mistakes twice. LOVE. It can be beautiful but it can, as it most often is in today’s world, bite. 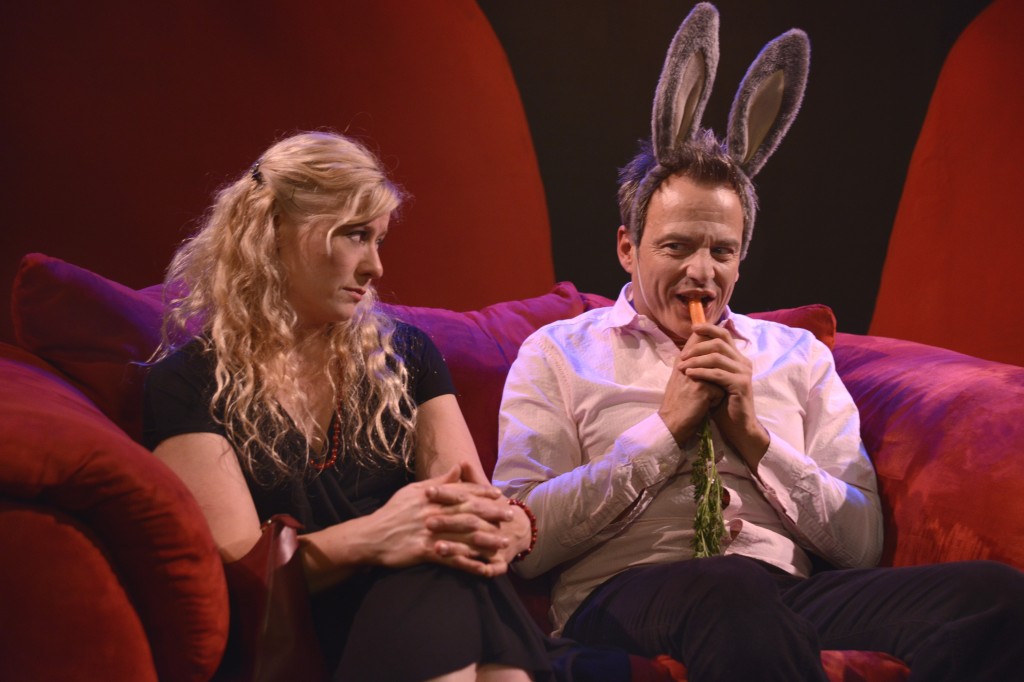 With a cast that doesn’t hesitate to dive into the very core of their characters, LOVE BITES is a theatrical masterpiece. As you watch each chapter, you are pulled in the moment each actor speaks or smiles or does some gesture you can’t help but notice. The play begins with two people talking through a bathroom stall. Two strangers. A man and a woman. The woman is nervous and lacking self esteem with the added bonus of a crack addiction hoping to escape for 40+ minutes and the man, well he is so seemingly confident and candid, but emerges from the stall in braces to help him walk. Their meeting is not only unlikely but near impossible and yet they meet outside of the stall and in a brief moment become the beacon of “misconceptions”. The next chapter takes place inside of a woman’s apartment who has called her friend and neighbor – a neighbor that dresses like a super hero and for all intensive purposes believes he is – for help with just about anything she can come up to keep him there. Now imagine a dance club. A man, a woman. The man – so awkward and yet endearing. The girl – overly honest and just wants to let go. A dance. A dance of breaking down the walls. Put them together, find an unexplained connection, throw in the possibility of sex with a stranger in a minivan and you have yourself a story! Another Chapter leaves a man and woman alone and stuck at the end of the world. Through awful communication, the battle for the last remaining chocolate type ding-dong, and an unfortunate set of desperate circumstances, two strangers now find themselves hating the last person on earth.

Now enter a married couple having sex – And the husband accidentally calling out his wife’s friend’s name instead of his wife’s! The conversation takes a sharp turn with the wife now disgusted and changing gears to willingly (and openly) discuss her “reel pick”. Through humor, transparency, and a change in perspective, this is a relationship that is on it’s way to finding that spark (as long as it’s from the highlight reel!). We are then introduced to a couple that are in therapy. Husband wears bunny ears, wife can’t take him seriously. This comical tale between the two and discovering why they are both losing their way uncovers the truth that every parent will experience – empty nest syndrome. Only with this one, well this one has bunny man. Next scene is a couple – an odd couple – not entirely familiar with one another but dwell in metaphors to enhance their desire. The girl, she tells stories to the boy. Not your typical kind of story – twisted, wonderful, sweet stories which in this case is about an egg. Named Eggy. And a worm. Named Wormo. The story between these two is dynamic to say the least and leaves you wanting and suffering at the same time. Finally, the show ends in true Los Angeles style: An actor and an agent/manager. The Agent/Manager is a strong, fierce woman who just uses the actor for sex. The “actor” has no clue he’s being used (nor would he care) and well, let’s just say there’s a shocking murder. 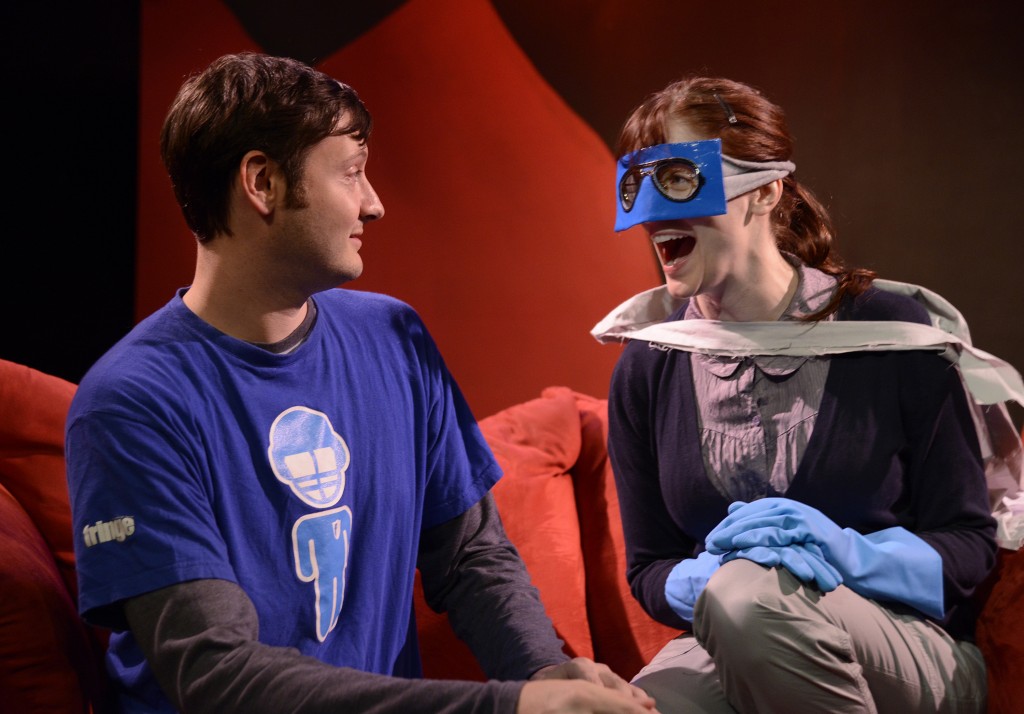 This ensemble of talent was above par. I know I love theatre but I don’t always walk away thinking, “Holy hell! That was like nothing I’ve ever seen!” and with LOVE BITES, I did precisely that. It is well done, masochistically entertaining, hopeful, laughable, biting, well written, seamlessly performed, and executed in a way that leaves you wishing the theatre was just a tiny bit bigger to stand up, clap, and do so loudly and dramatically. This performance is not for the Mary Poppins kind. It’s for the deeply wonderfully open-minded who can spot brilliant dialogue from miles away.

FOUR WEEKS ONLY, THROUGH MARCH 2

The Elephant Theatre Company, David Fofi and Lindsay Allbaugh, Co-Artistic Directors, has announced it will present the 11th edition of LOVE BITES as a prelude to the Elephant’s much anticipated 2013 season of plays, which will be announced shortly. LOVE BITES will have one preview on Thursday, February 7, and opening is set for Friday, February 8 at 8pm. Over the years, the LOVE BITES short play festival has become a local ‘cult’ favorite.

LOVE BITES is a delicious assortment of short plays that explore love in all its miserable glory with humor and irreverence … the irresistible passion, the humiliating pitfalls, the euphoria, the anguish, and everything in between. The plays, which will be performed at the Elephant Space in Hollywood, are written by both company members and writers from around the country, and will be performed and directed by members of the Elephant Company.

Of an earlier production of LOVE BITES, Back Stage said, “… not for the faint of heart … superbly acted and ably directed. These pieces, whether surreal or true to life, make for a crisp evening of outrageous fun … leaves one exhausted and guiltily anticipating next year’s production.”

LOVE BITES will play one preview on Thursday, February 7 at 8pm, with opening set for Friday, February 8 at 8pm. The regular running schedule is Thursday and Friday at 8pm, and Saturday at 7pm. There will be two 10pm performances on Saturdays, February 9 and 16. The run ends March 2. General admission tickets are $20. There will also be a special Anti-Valentine’s Day event on Thursday, February 14 at 8pm, including sweet-and-naughty goodie bags and a champagne after party. Tickets for the Anti-Valentine’s Day event are $30.

To purchase tickets for regular performances and for the Anti-Valentine’s Day event, and for a complete listing of the festival plays, visit www.ElephantTheatre.org or call 855-663-6743. The Elephant Space is located at 6322 Santa Monica Boulevard (one block west of Vine), in Hollywood. Street parking is available.