Imagine a hum. A dark forest. And a woman. The coarse cold air rushing through the trees, the sharp turn of curiosity looming around you until everything in you begins to pulse and suddenly that faint hum is now a roaring beckon. And then that hum gets closer. Closer  and closer, the forest falls silent as the hum becomes a beckoning purr. Within moments, lights come into view and something inside of you feels compelled to want. Open your eyes … now welcome The Wraith! – DG, ATOD

Invited to a private viewing of the newest Rolls Royce Model, The WRAITH is one of the sexiest cars I have ever come across. Introduced to David Archibald, President of Rolls-Royce North America, Philip Harnett, Product Manager, Wraith, Andrew Thurner, Concept Exterior Designer, the show begins with an informative introduction only to be followed by a Hollywood-like film oozing with curiosity, intrigue, mystery, and longing. 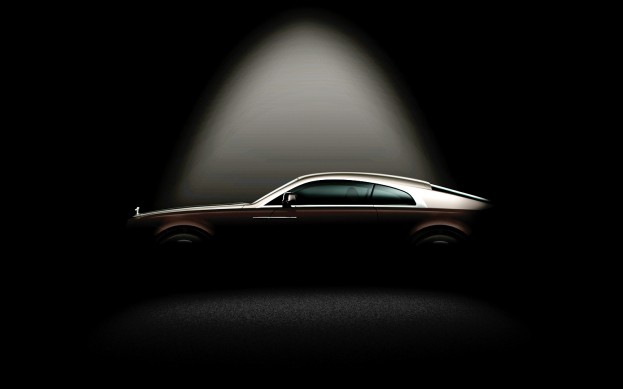 The movie: A man driving through the forest and all that can be heard is the hum. A mansion. A woman. She hears the sound of the Wraith and feels it’s beckoning call. She makes her way outside, the car passes just before her. The camera stalls, then freezes. SHE is the Spirit of Ecstasy and he is the welcoming driver. The movie pauses, the room becomes paralyzed with eyes longing to see the new creation. The screen rises, fog fills the air, trees line both sides of the showroom floor, and in the middle – the brand new WRAITH. Gorgeous. Four and a half years of design and execution, Philip and Andrew share the stories behind the vehicle, the passion and vision to create it, the details and homage to Rolls and Royce, and the pride in it’s completion.  While it was designed and housed in Munich, this beautiful piece of luxury was very well under wraps until now. While glimpses have been given, this is among the first true unveilings around the world and I can assure you, you will begin to crave the new design. It will be released first in Geneva and soon, the world will have access to this gorgeous new model of a classic Rolls Royce that began it all. 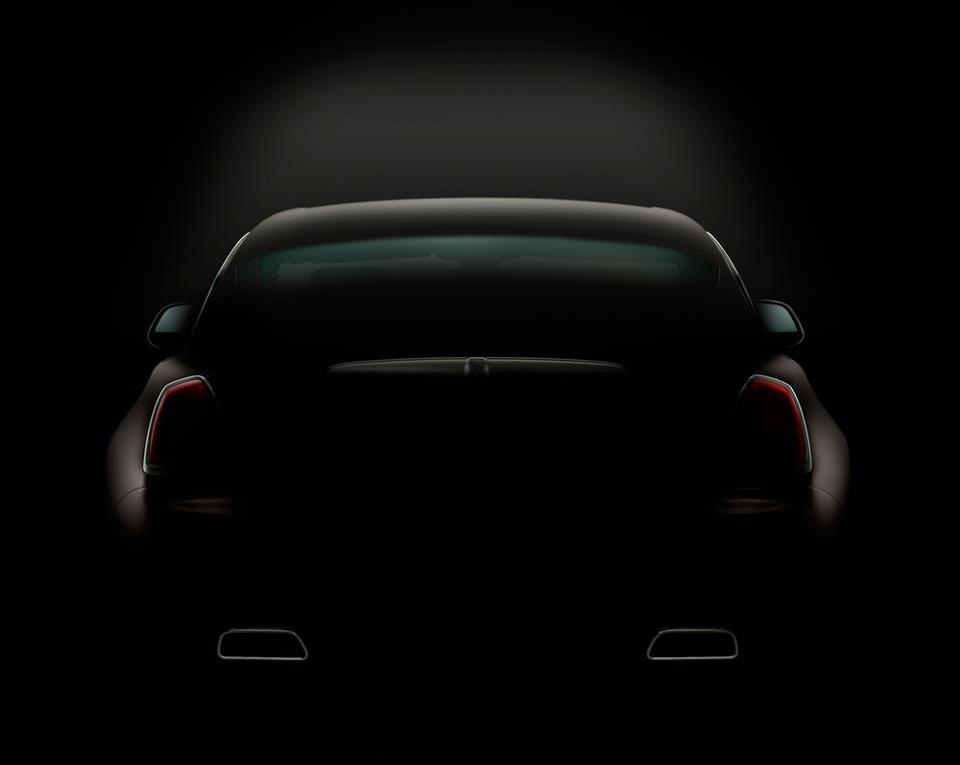 With a Wraith that was on the market in 1938, this brand new model really is like nothing Rolls Royce has ever produced. Two toned, sleek, built with luxury and adventure in mind, this is a vehicle that defines sophistication and a healthy dose of “play”. With a 600 horse powered engine (the fasted Rolls Royce EVER built), interior lighting that creates an ambiance only synonymous with the luxury of a Rolls, the delicate craftsmanship of the inlaid wood lining the interior side panels, the elongated nose, and the sleek rear design – you can’t help but find the beautiful sensuality behind this newly designed Model of WRAITH. In fact if you look closely, from the front, it looks as if a man is grasping on to a woman. THIS is pure sexy with a hearty influx of power, elegance, style, and the exquisite quality known only to Rolls Royce. Limited release, this car will be priced beginning at $250,000. Trust me, it’s worth every penny.

Before the world gets to see it a thousand people were invited to feast their eyes on the brand new WRAITH – several reveals were planned around the world and it was an absolute honor to be among them.

Thank you to Mitch Anderson and Sahar S. Manley of Ogara Coach, Westlake for invigorating my senses and making me fall madly in love with this newly inspired Rolls Royce, the WRAITH. For further inquiries, please contact Sahar S. Manley at: 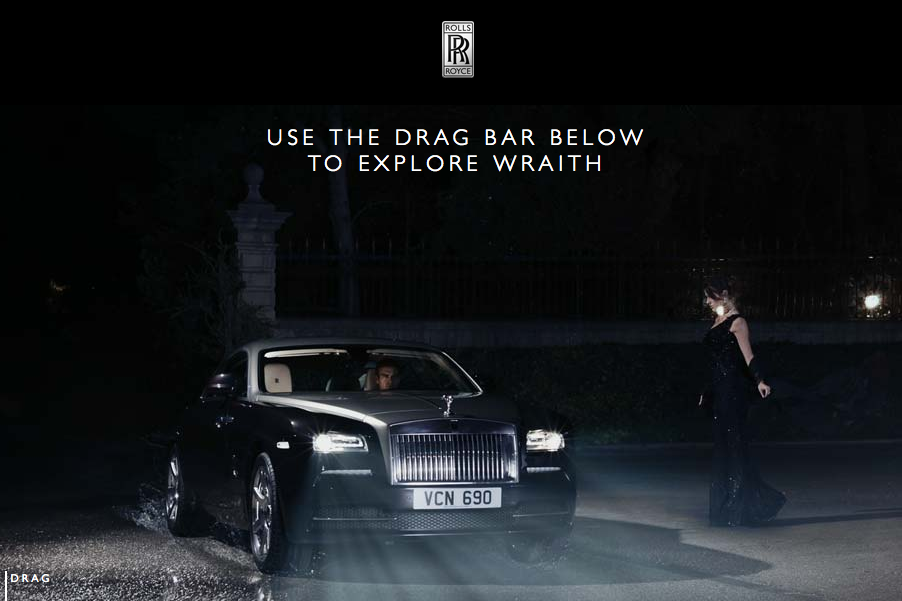 History of the WRAITH by Rolls Royce

The Rolls-Royce Wraith was built by Rolls-Royce at their Derby factory from 1938 to 1939 and supplied to independent coachbuilders as a running chassis.

The in-line six cylinder, overhead valve, 4257 cc engine was based on that of the 25/30 but featured a cross-flow cylinder head. The four speed gearbox had synchromesh on second, third and fourth speeds and retained the traditional right hand change.[1]

The Wraith featured an independent coil sprung front suspension based on a Packard 120 retaining semi elliptical leaf springs on the rear axle. The hydraulic dampers at the front had their damping rate controlled by governor and so varied with the speed of the car, making it superior to its predecessor, the 25/30 H.P. and on par with the Phantom III. The car was still built on a separate chassis but this was now of welded rather than the traditional riveted construction. The drum brakes were assisted by a mechanical servo driven by the engine patented by Hispano-Suiza and built by Rolls-Royce under licence. Wire wheels of 17 inch diameter were fitted, with the spokes usually covered by removable discs. A built in hydraulic jacking system was fitted operated by a lever under the passenger seat.

In 1938 the chassis cost £1100 and a typical touring car £1700 complete. 492 chassis were made. Although chassis were only produced in 1939, cars bearing 1940 or later delivery and registration dates are not uncommon. Some cars were finished off during early 1940. Others were held in storage and sold and first registered during the war years. A few were actually bodied during wartime. In addition, 16 prewar chassis were bodied in early 1946 and duly delivered to the government. The final Wraith was delivered in 1947.

Open
Our home retreats have taken on multi-purpose func

Our home retreats have taken on multi-purpose function with parents, kids, and and maybe even in-laws working, schooling, and relaxing at home (or trying). The pressure to create unique spaces for everyone is on. Barrie Spang, a designer in Cleveland says the biggest challenge he faces is when his clients learn that both they and their partners will be working from home permanently. Most homes don’t have more than one office space, and now every room is a potential double-agent (office, that is)!

That’s why it’s time to accept our limited expertise in redesign and turn to those who are experts in their field. Take something as seemingly simple as lighting. It seems like an afterthought, but when we’re spending all of our time at home, lighting can be the difference between productivity and frustration. A beautiful home wouldn’t be the same without prominent light fixtures. Light is our guide in a multitude ways, so utilizing beautiful and classic fixtures like a chandelier in a modern room can add the warmth and story you’ve been searching for.
Schonbek Worldwide Lighting
______________________________

Open
The holidays have officially arrived, and after th

The holidays have officially arrived, and after the year we’ve all had, cooking at home—again—may not seem as endearing as it once did. Breaking down the new #pandemic dynamic, family gatherings are non-existent—if we’re smartly adhering to the COVID rules, absent of the dozens of family members and holiday stragglers some of us are accustomed to—and the call to create uniquely healthy comfort alternatives must be heeded.

These 2 #plantbased #vegan #recipes 🥮🥘 from @goplantx stirred by love of comfort food that’s a little extra!

Open
As the surge of #cannabis and its implementation i

As the surge of #cannabis and its implementation into the mainstream marketplace continues, finding new brands that speak to us and our commitment to health and wellness is paramount to all of our success. So when we joined the Pachamama CBD affiliate program, the brand sent us an amazing starter package consisting of their tinctures and their topicals and we fell instantly in love. Pachamama CBD is a company that was built on the betterment of its founder, Brandon Stump who turned to CBD when he made the choice to abandon a life of drug addiction. It was when he spoke to his brother Ryan when Brandon had officially hit rock bottom that led the Stump Brothers to where they are now.

Open
Love my @thrivemarket membership! So many #glutenf

Love my @thrivemarket membership! So many #glutenfree #vegan #healthy #sustainable and family-friendly options.

Open
Ojai is a beautiful (and tiny) city in @visitventu

Ojai is a beautiful (and tiny) city in @visitventura located amid the Topatopa Mountains, known for its amazing climate, Bohemian vibe, happy locals, incredible array of cuisine, craft #beer and #wine, and speciality #cocktails…and some of the most eclectic shopping you can find just outside of LA. It is also home to a desert oasis, Airstreams glamping, and a little weekend bliss by way of dog-friendly Caravan Outpost. With kids doing school at home, making mindful choices in our new way of life, @caravanoutpostojai was our answer to a little sanity.


Error: API requests are being delayed. New posts will not be retrieved for at least 5 minutes.

Today’s Show was about Living Life Happily and Expressive: The Theatre, Comedy, Food + Wine, Travel, and Humanitarians that change the world through the Arts.

I had a week that invigorated so many parts of my soul. Music, Broadway, passion, life, food, wine, good company, and the reminder of everything in life that matters so much to me. Above all – I lived. We need to all just envelop the things surrounding us. Regardless of how fleeting or momentary, just enjoy those tiny inescapable moments before they vanish. Live every moment because you – You are – NOW.