LMSeptember 29, 2016 | Longines Masters is an equestrian prestige worthy of mention and this year’s Masters we are accompanied by dining and bubbles from Champagne Barons De Rothschild.

Walking up to the entrance, an usher cinches the gold wristband around my hand while I grasp a black letter-pressed media packet with the other. Soon I’m free to join the rest of my group just inside the arena. The arena is a black void save for the azure spotlights periodically flashing overhead.

Two more security personnel meet us at the bottom of a flight of stairs to check our bands and extend a hand guiding us up. A booming voice fills our ears in a greeting to those we have yet to see in attendance, with a verbosity completely unrecognizable in the ringing cavernous space. We reach the top of the steps to behold a sight that grips me somewhere on the spectrum of displaced magic: a field of glowing bulbs wash clothed dining tables in silky sheets of light, men and women in elegant dress lean back amidst clinking champagne flutes and sterling silverware. The air awash in the chirpings of a violin cord just beginning its song over the speakers above us. 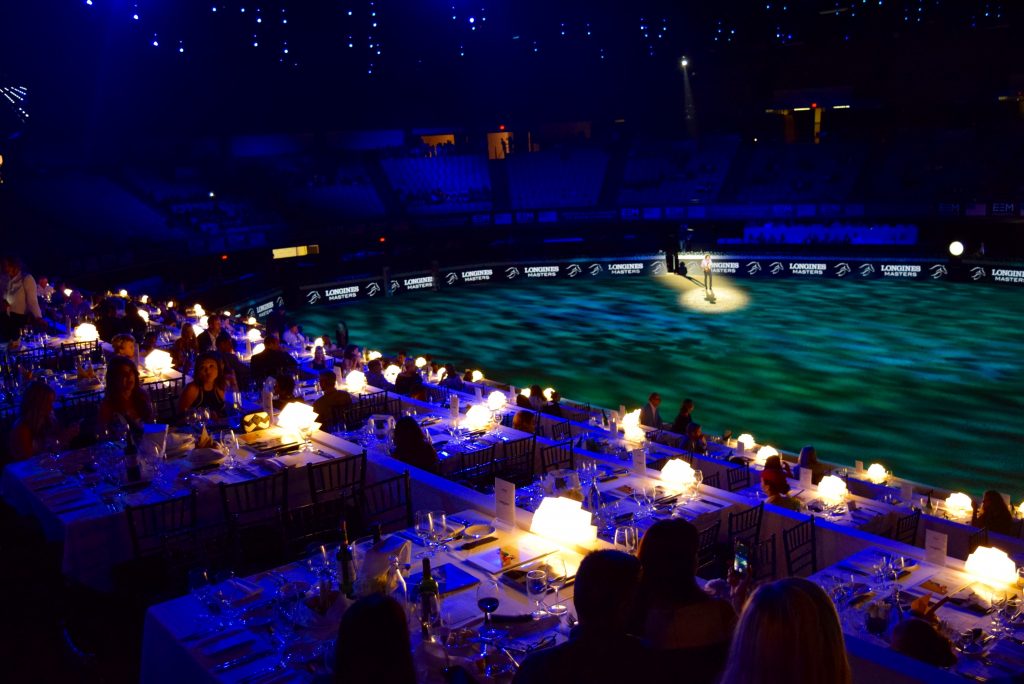 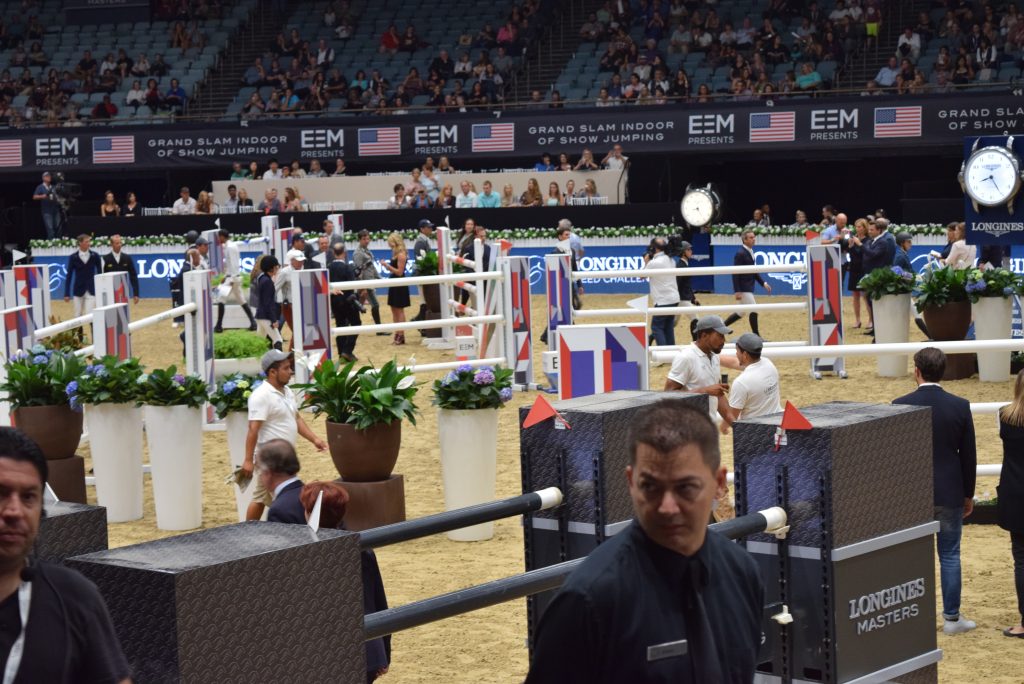 Together, there’s an implied refinement behind the whole makeup—and not because this is the first time I had to google ‘Casual Chic’ before dressing for an evening. We make our way past other groups and couples, their hushed conversations and languid expressions as they watch the pitch on which a white stallion is making the rounds along its dirt ring. 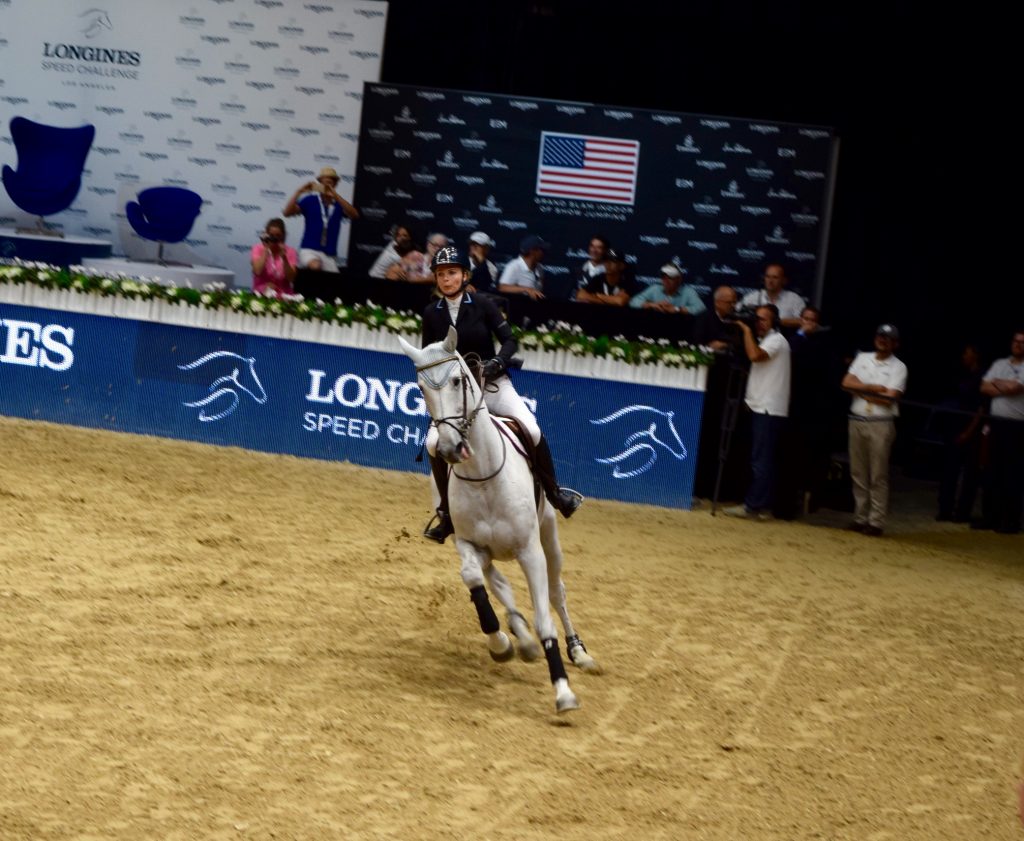 Arriving at one of the glowing tables to set down our things, I am introduced to Frédéric Mairesse, the Managing Director for Champagne Barons De Rothschild. A dapper French gentleman sporting a dark blue suit and tie, Frédéric has been with Rothschild since it began distributing bottles of its now world-renown champagne back in 2009. Greeting each of us in turn with a warm smile and a firm handshake, our host for the evening asks us if we’d care to join him in an open room overlooking the arena.

We oblige and make our way to what could easily be a club space where champagne, fruit kebabs, and an eye-catching crudités platter awaits. Out on the pitch, a performer has the stallion and another horse lying on their backs and patiently letting their upturned bellies become platforms for two zippy Border Collies.

A few bubbling flutes and pineapple kebabs later, we’re back at our table and ruminating over the menu’s thick cardstock while arena staff transform the now-empty field into a buffer zone of jumps and obstacles. Thirty-four riders from all over the world have descended on the Long Beach Convention Center this weekend to compete in the biggest equestrian competition since the Rio Olympics, and though I’m not too familiar with equestrian competition there’s definitely a palpable buzzing energy going through the watching crowd—dining or no—despite the heavy decorum. 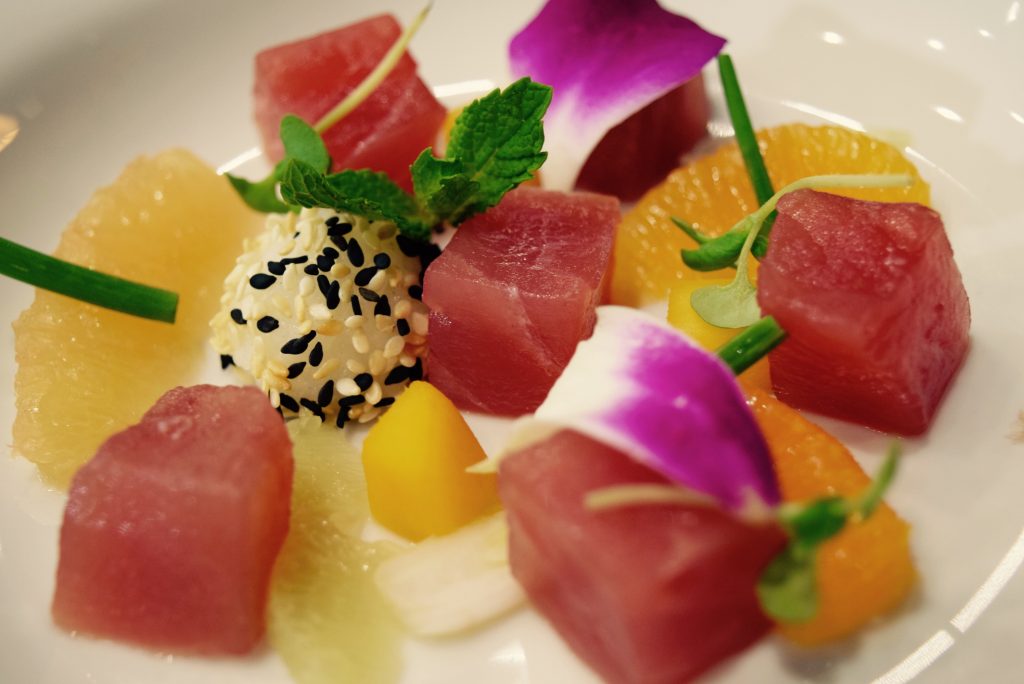 The first dish of the evening is a tuna sashimi salad, made up of several cubed portions of the fish and besieged on all sides by artfully plated mango, sesame rice, citrus, curry, coco, spring onion, and mint sprigs. It’s beautiful fare, and one which every bite comes a new song—mango and mint, citrus and curry, coco and spring onion. Though I wouldn’t necessarily say it changed my life, this dish does a wonderful job of jogging the palate into the creative unknown especially when combined with the peachier notes of the Rothschild Brut.

Despite being the smallest entrée of the evening, it takes us the longest to get through as we watch without an element of apprehension as the Speed Challenge unfolds just yards away. To qualify for one of the three seats (the equestrian equivalent to the podium), a rider must navigate a series of hurdles in just over a minute, without accumulating too many points vis-à-vis fallen obstacles. It is easy to become enthralled, even for a newcomer, due to the nature of the sport, the closeness of the obstacles, and the very real pounding of hooves and snorting of snout. 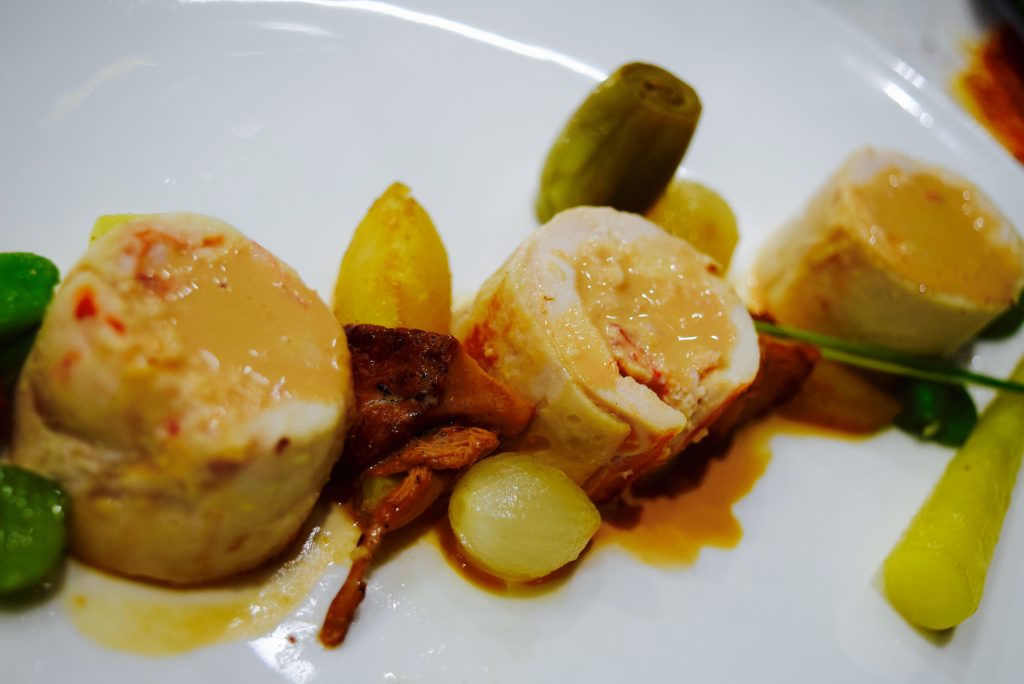 It is during this brief interlude that the second entrée is laid out—stuffed chicken with lobster, a baby vegetable medley (carrots, potatoes, and pearl onions), hazelnuts, sitting in a pool of savory Nantua sauce. It is well-plated, the chicken tastes like,well- chicken, the veggies like veggies, and yet it never seems to really tie together. Even the thick lumps of lobster swaddled in Béchamel and crayfish butter manage to surprise the tastebuds only briefly, and yet I have to wonder if its the latter’s lack of verve that is the missing link to this puzzle.

Here, however, is where the Rothschild Brut really shines. The beauty of this champagne lies in its refined simplicity, an ability to produce silky smooth bubbles, and a mostly Chardonnay flavor 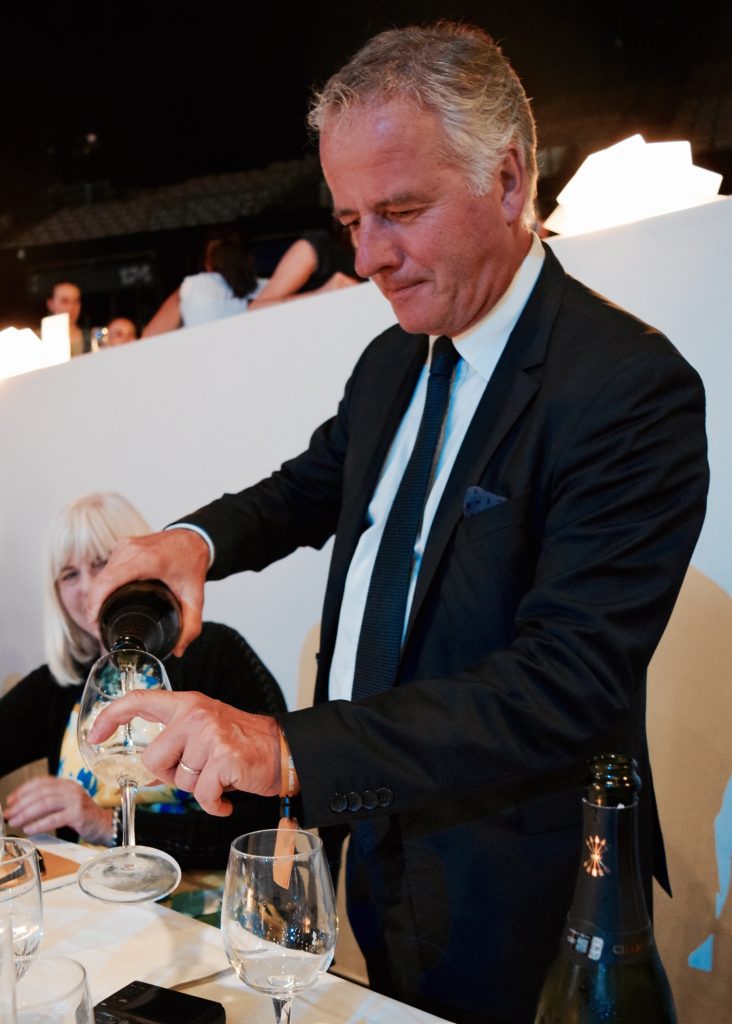 profile that recalls yellow fruits and citrus. An aging process of about three-to-four years conjures up toasty notes, and a low sugar input still manages to produce a light sweetness that would complement any dish—or you can be like me and enjoy a glass in between as well.

Initially produced for private consumption, worldwide Rothschild champagne distribution came to be after its initial appeal at home became obvious. It would be the first time the three branches of house Rothschild—Château Mouton, Châteu Lafite, Château Clarke—would pool their resources and know-how to create a wine worthy of the name Champagne Barons de Rothschild, and its motto, “Concordi – Industria – Integritas.”

Today, Rothschild champagne can be found in over 70 countries, and as sponsors for key luxury brands such as Longines and Airbus. One need only look around to see their influence in the jade colonnade surrounding us from the other tables. 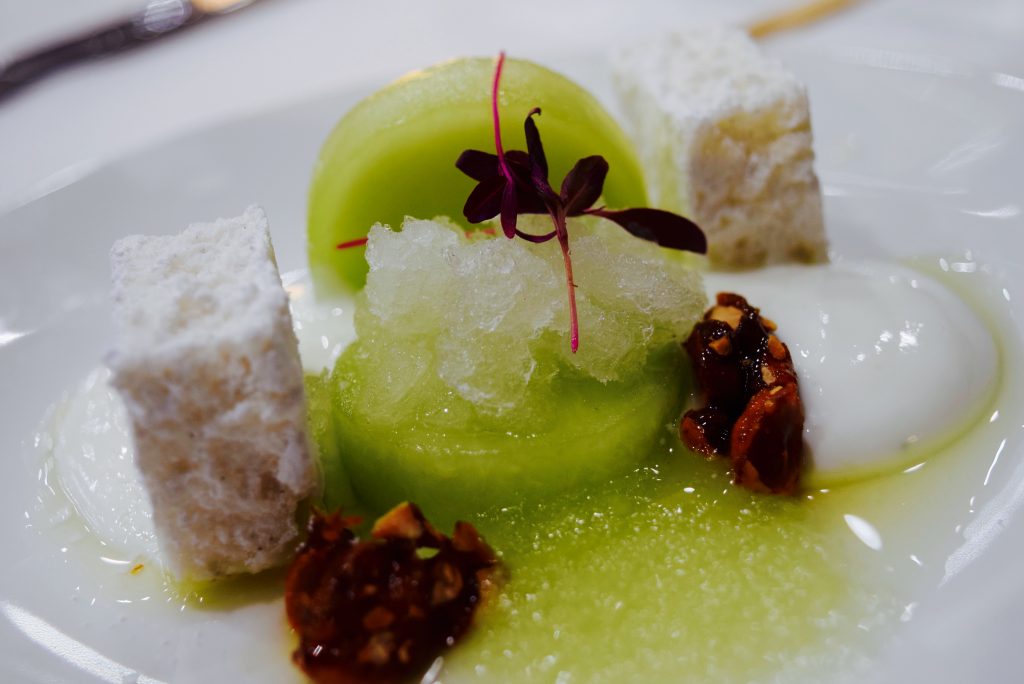 A rider jumps, another retires from competition, and a third makes his way to the podium to await judgement when the final dish of the evening is brought to us. A handsomely plated dessert of melon, almond nougat, yoghurt, and jasmine-infused marshmallow. With a sweetness that oscillates between refreshing and savory, it is a wonderful pair with the milder tones of the Brut, the purity more obvious here in its neutralizing qualities and which is maintained again due to intentionally abstaining on the the sugar input versus dilution. A truly remarkable versatility.

Down on the pitch, Nayel Nasser of Egypt has taken first place in tonights Speed Challenge, followed by Kevin Staut and Samuel Parot, but the real winners seem to be those in attendance who were given the opportunity to enjoy excellent competition, a delicious meal, and an exemplary champagne.

Recognized by both the International Equestrian Federation (FEI) and the U.S. Equestrian Federation (– — USEF) as a CSI 5* event, the American leg of the Longines Masters established Los Angeles as a prominent location for the international equestrian scene, a first since the 1984 LA Olympic Games. Rated since its inception in 2014 as « Number one show jumping competition in America » according to the North American Riders Group, the Longines Masters of Los Angeles will take place this year on the heels of the 2016 Olympic Games, as one of the premiere 5* events in the US. [longinesmaster.com]

Power, honesty, gritty self-awareness, passion, love, humor, sexuality, self doubt … Every artist must have all of these.

The Independents Vol. 1 is a compilation of extraordinarily talented artists acting out moments of their lives and each and every one of them embody the characteristics mentioned above. The evening air relents and lowers its obstructive heat to give us a moment of cool calm.