Speaking Out, Eating Happy, and the Joys of Salted Butter Popcorn

LA#TuesdayTalks♥ | The first time I met Susan Feniger was in Austin at the Rock Your Taco event that was Food Republic’s competition at the 2013 Austin Food & Wine Festival.

After tasting an indulgent amount of tacos, it was her vegetarian taco that won my heart. And then I met her … and that was that! Since then I have become a regular frequenter of any one of her restaurants including Border Grill she has with longtime partner, Chef Mary Sue Milliken. She also had a wonderful spot in Mid-Wilshire near where I used to live that was my go-to, Mudhen Tavern.

I loved when I got to see her while she ran around with that contagious smile and warmth that always makes you feel so happy you came in to eat! Now you can find her at her latest culinary endeavor alongside Chef Kajsa Alger at Blue Window LA, a takeout window like you’ve never seen before. In addition to restaurants, Susan has been instrumental in one of Los Angeles’ most wonderful premier food and spirits events: Simply diVine. This year marks the 13th Annual Simply DiVine Festival in Los Angeles, and its new home at the legendary Hollywood Forever Cemetery.

Chef Feniger is the Co-Chair of Simply diVine and this annual event has meaning and deep roots in supporting LA’s LGBT community. Simply diVine doesn’t merely feed your hunger, it also creates a safe, unified, beautiful, welcoming space for everyone to enjoy while raising money for the Los Angeles LGBT Center.

As for Hollywood Forever, for those don’t know, this cemetery isn’t a place of sadness but rather a celebration of the life and fervor of those who have impacted our lives through their performances and creations of all that is “Hollywood”. It’s a spirit that is impossible to quiet and one that genuinely offers joy so when the tent was set, lights adorned, and the undeniable smells of freshly made cuisine danced under our noses, you knew this year was going to be something special! And according to the LA LGBT Center? It will make a HUGE impact on the LGBT community.

Simply DiVine had a record-breaking year, raising more than $200,000 for the Center’s life-changing and life-saving programs and services.

In essence, Susan Feniger is the embodiment of culinary love, kindness, and beautiful humanity. It is an honor to be able to share our interview below so enjoy learning a little bit more about the chef we all can’t help but love. 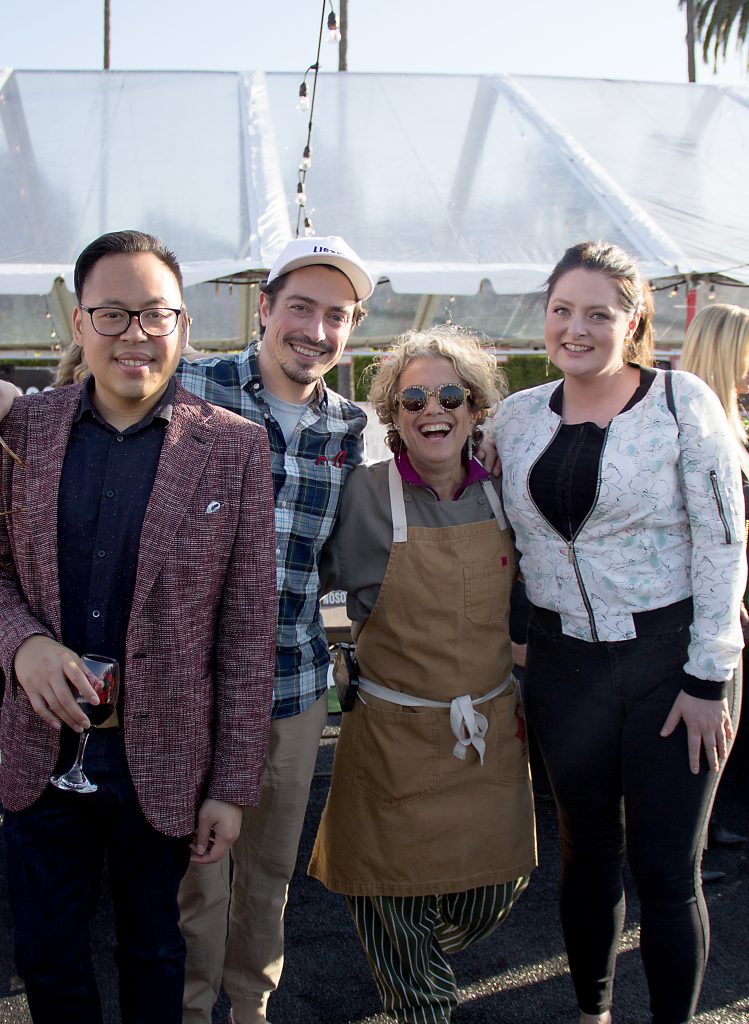 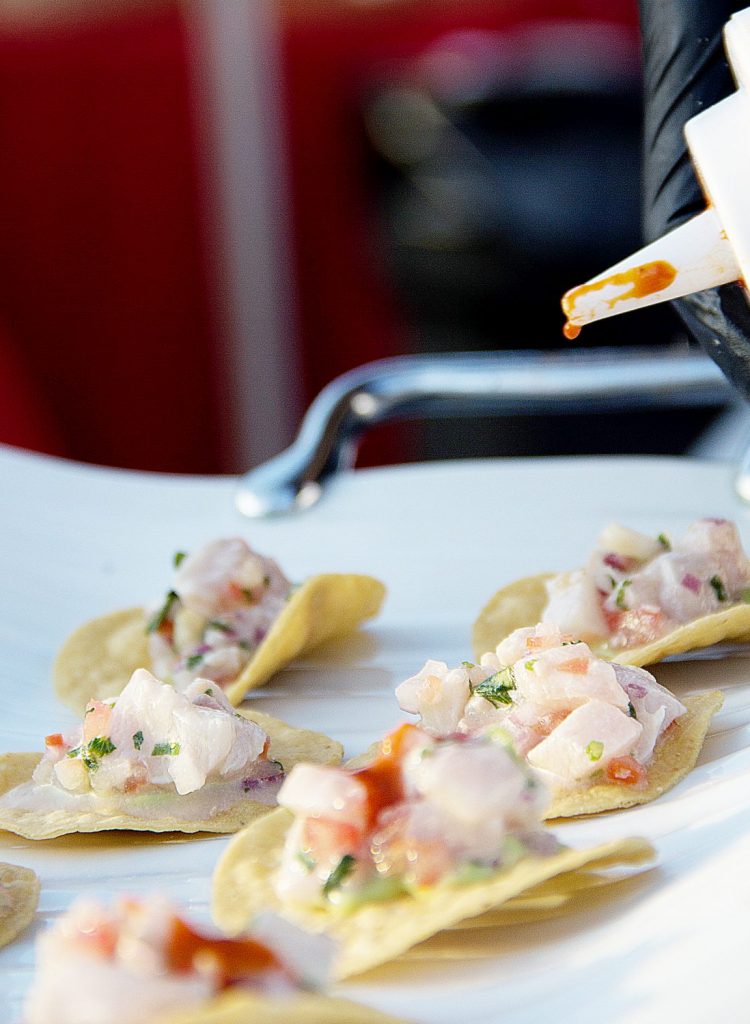 How did you decide to be involved with Simply diVine?

Given that I’m on the board of the LA LGBT Center and a chef, it was an easy decision for me to do this fantastic event! Food and wine is right up my alley! And raising awareness about the Center among the restaurant industry is something I feel is really important. There are so many LGBTQ people within our industry, so having a food and wine event that is also supported by the industry felt right too.

As the event Co-Chair supporting our LA LGBT Center, what do you think our city needs most to continue to support the LGBT youth and adults in coming out, getting support and understanding?

I love what the Center is trying to do with the new capital campaign, bringing inter-generational groups together in a bigger way. Living close to each other, cooking meals together, and sharing an environment will give both the youth and adults a crazy amount of support, emotionally and physically. The restaurant business creates a similar kind of support by giving kids a “family” other than their blood family. The Center is creating family for young kids and for seniors. In a way, I think that is more important than anything.

Now being held at Hollywood Forever, is there anything in particular you’re most excited about?

The vibe of the cemetery is great. It’s iconic, it’s beautiful, it’s historic. Its energy is so in sync with who we are and I love that. We are strong, powerful, iconic, caring, thoughtful. This is what the Hollywood Forever represents too.

What inspires you to continually evolve as both a chef and a restaurateur?

I love what I do, in every way. From wearing a uniform to work every day, to being among tons of young, exciting kids who are just beginning their careers, many who are lost, many who are focused, many who work really hard, many who make you laugh. Creating that family environment of respect and loyalty keeps me inspired to be a restaurateur that stays ideally current. As a chef, the love of food, the creative process, being a part of that, learning more and more about products, sustainability, food from other countries, learning about a culture through their food. Food has always been a huge part of my life, my mom was a fantastic cook, and I have many memories of cooking with her from the time I was a young punk. 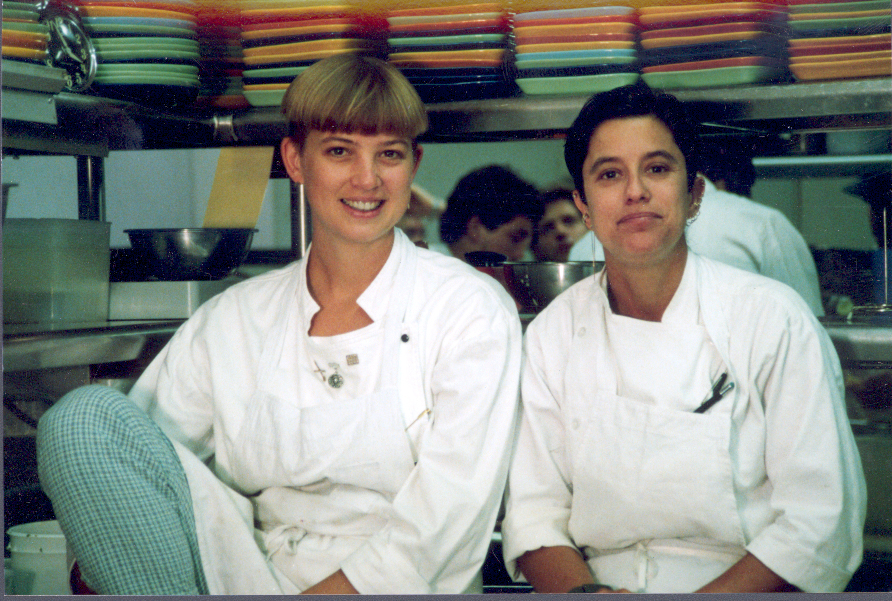 You’ve been friends with Mary Sue forever! What is one of the funniest moments you two have encountered along your culinary journey?

Wow, Mary Sue and I have been business partners for 37 years so there have been so many funny moments. One time, many many years ago, when we were just starting out, we did an event with all these famous French chefs where Mary Sue and I were the only women (not unusual back then). We were driving to downtown LA, in the middle of rush hour, with a 5-gallon bucket of hollandaise sauce when Mary Sue slammed on her brakes. The bucket went spilling ALL over the floor of the back seat. We were already running late, so we literally scooped it all up, put it back into the bucket – specks and all – and said, ok, that’s black pepper and served it! We laughed and laughed about it.

In a world that is so seemingly upside down these days, what message do you hope to convey with Simply diVine?

I think the most important thing we can do is be supportive, involved, and help get the message out to people that as a community we are strong, we must vote, and be a part of change. We don’t do speeches at Simply diVine but our hope is to get young people connected to the Center and our work. The more they connect, the more they will learn what we do and hopefully jump on board to enact change.

What would we be surprised to know about you? And, what is your guilty pleasure?

You and your longtime partner, Liz, seem to have it figured out. What are three endearing characteristics of hers that you continually fall in love with?

She’s gorgeous, generous, crazy creative, smart, and talented. She has the ability to be a fantastic business person, organized and action oriented, but she’s a complete artist in every way. For years she was a singer song writer (with an Emmy) and now she’s a writer/director. Great vision on so many levels. She loves to get up early and stay out late! My kind of gal (23 years!!)

What was the first meal you experienced that opened you up to the wonder of food?

India in 1982. I was already cooking in French restaurants, my first trip to India opened my eyes to food and flavors I never experienced. Indian street food completely blew me away.

I just want to thank Susan for doing this, for being instrumental in continuing the conversation of acceptance, and for everything she does for the culinary world and for young LGBT men and women here in LA and everywhere. May we all be an active part of positive change …

A classically trained graduate of the Culinary Institute of America, she was a trailblazer from the start, landing a job at Chicago’s famed Le Perroquet as one of the first women in the all-male kitchen. Following that, Feniger worked at Wolfgang Puck’s infamous Ma Maison in Los Angeles, and then further honed her culinary skills on the French Riviera. She opened City Café in 1981, which forever changed the culinary landscape of L.A. by offering eclectic dishes from around the world. This led to a much larger CITY restaurant in 1985, a pivotal year in which the tiny space was transformed into the first Border Grill, a “taco stand” serving authentic home cooking and street foods of Mexico.

Susan has co-authored six cookbooks, including her latest, Susan Feniger’s Street Food. Susan is a veteran of 396 episodes of The Food Network’s popular “Too Hot Tamales” and “Tamales World Tour” series and competed on Bravo’s “Top Chef Masters” in 2010.

Susan shines a light on a number of worthwhile organizations and has been on the board of the Scleroderma Research Foundation for 18 years, the board of the L.A. LGBT Center for 4 years, and involved with Share our Strength and the Human Rights Campaign. She’s an active member of the culinary community, providing a leadership role in many organizations such as founding the Chefs Collaborative, sitting on the advisory board of the LA Sports & Entertainment Commission and serving as an active member of Women Chefs and Restaurateurs.